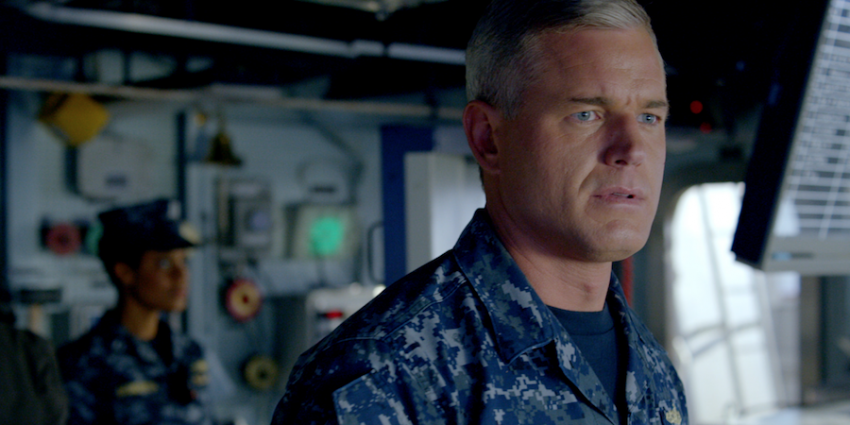 “Minefield” is a masterful, skull-spinning, assault on your emotions. The cast calls this fifth episode their favorite and with good reason: it takes you on a journey that upends every idea and preconception you’ve developed thus far, and leaves you wondering what in the universe you just witnessed. This is Emmy worthy writing and production that I sincerely hope the Academy acknowledges. Written by Mark Malone and directed by Peter Weller, the show has rewritten their playbook and launched the series into the stratosphere.

You only put a wall up if you’re trying to protect something.
-Chandler

In a first for this series, “Minefield” gives us an eerie underwater scene as Green, Wolf and the rest of their team investigate the mines. I figured the pirates would use mines they had “found” but no, just as these are no ordinary adversaries, these are no ordinary mines. Linked together in sets of three, the mines detect physical contact, SONAR, and then there’s the mysterious third element. 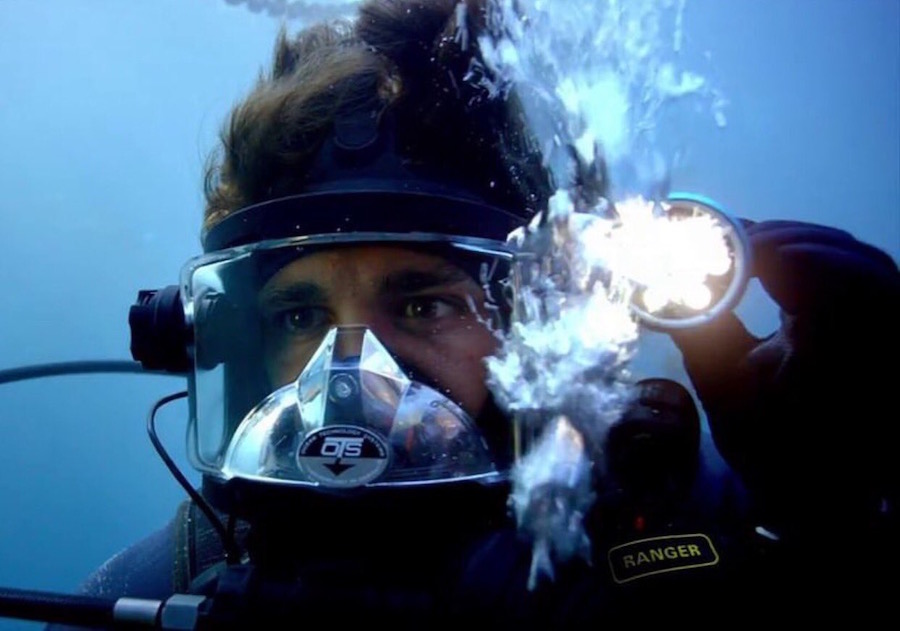 Wolf checks out the mines. “Minefield” / The Last Ship Ep 305. Photo from TNT.

The show doesn’t really describe how this third mine operates, but when the whole lot of them start moving toward the James, I figure these mines are equipped with pressure sensors. NOAA uses deep sea pressure monitors to detect tsunamis. To my mind, that’s the most logical, if not ridiculously devious, way to allow a mine to detect an explosion, and navigate toward the last known location of an enemy. The idea of mines that hunt on their own is chilling and my stomach dropped because I didn’t know how the James would find their way out.

Cruz, played by Ness Bautista, has become a vital team member on the Nathan James. He has been around since the first season and I’m delighted to see his continued success on the show. Bautista stated in an early interview that he is deathly frightened by the water and that his very first scene for ‘The Last Ship’ was shot on a RHIB out on the ocean. You never see the fear on his face though.

I suspect this outward fearlessness encourages the writers to keep throwing Cruz back into the water. Last episode it was jumping off a helicopter into the ocean, and now he’s driving the RHIB as they try to draw the mines away from the ship. When the final explosion occurs I was sure that Cruz was a goner. Every time the audience gets close to a character, the writers break our hearts and find a way to heroically kill them off. Thank goodness they spared Cruz for at least one more episode. Plus, when he does meet his tragic, final end, Ness should be so acclimated to the water that he’ll be part fish.

Sasha finally has a revelation in “Minefield” about Chandler’s true character. I think it starts with the moment on the bridge where she asks Granderson about evacuating the ship. Her question reveals her own uncertainty about their ability to get out safely. Alisha replies that personnel were surveyed and no one wanted to leave. I’d have been surprised if anyone did! The men and women on the James know they are better off working together and no one would desert their fellow sailors.

Chandler sends her to act as a lookout on the helicopter, giving her both a job to do and the best protection he can afford. She witnesses the sacrifice Wolf and Cruz make to intercept the torpedo and it sparks a paradigm shift.  She realizes that Chandler, like his crew, acts selflessly.  Everyone onboard the James trusts their fellow crew members not because they’ve been told to, but because they prove their worthiness for trust through action. Sasha has been very guarded in episodes past, but maybe we’ll see her shed that emotional armor moving forward. When it comes to the end and Sasha kisses Chandler, it isn’t about passion. No, this is a kiss of relief and gratitude that they all made it through together. 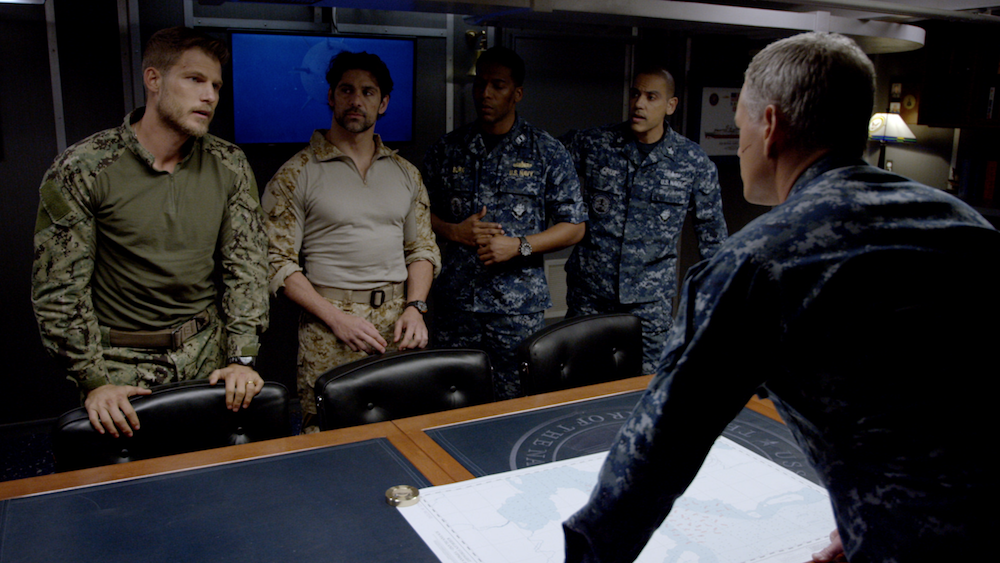 The scene where Chandler comes up with the idea to use the nixies (towed torpedo decoys) is a thing of beauty. The dialogue reveals the love these characters have toward one another in such a nonchalant manner that you might miss its true brilliance. Like layers of an onion, the crew peel away, first with Cameron rigging the nixies, then with Green readying the RHIB.  Finally, Wolf and Cruz offer up an adjustment to the plan so that they can keep Green out of harms way. The whole thing is carefully executed, and smartly written.

I hate to see grown men cry. In Chandler’s case, he comes right to the precipice of letting his tears fall and somehow manages to choke them back. His recording to his kids is keenly felt. The show has thrown so many curveballs this season that viewers can’t discount the option that the James might sink. We also can’t ignore the possibility that Chandler might succumb to injury. His outpouring of emotion as he says what might be his last goodbye to his kids had me wiping away my own tears of grief. How would any parent find the right words when faced with a similar situation?

Just when I thought I could put my tissue box down, ‘The Last Ship’ sucker punches the audience by leaving the survival of Wolf and Cruz up in the air. We’ve lost too many characters this season, and the search for the missing men had me on the edge of my seat. Suddenly, they’re found and rescued and the camera focuses in on Chandler’s face. The overwhelming relief threatens to break him apart. Everyone else on the bridge is oblivious to the intensity of Chandler’s struggle to maintain emotional control. I don’t know about you, but I was bawling yet again. The raw pain Eric Dane manages to convey through clenched jaw and furrowed brow is stunning.

All done pirating for the day? -Slattery
Not quite. -Takehaya

Just when I think Takehaya is only a cold, calculating snake, the writers give us a peek behind his emotional curtain. The revelation that he has a wife and baby on the way floored me. His love and compassion for her is obvious in that he is willing to ask for help from his captives. We see that she is also receiving blood transfusions from the crew but has succumbed to the elements, namely malaria. Rios knows right away how to help her and ends up saving her life. 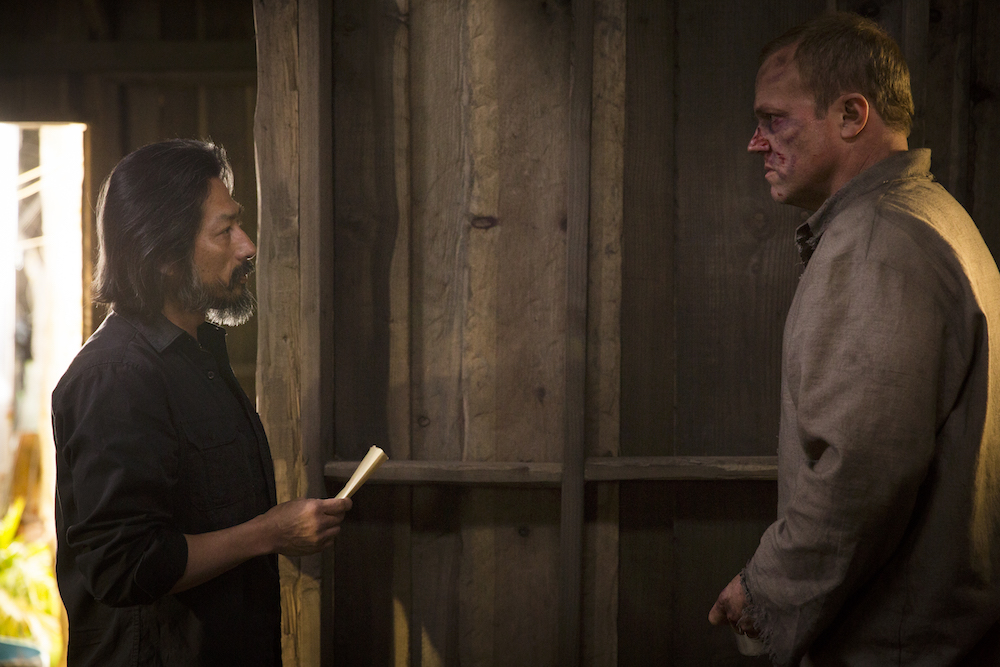 It is easy to hate someone you don’t understand. As a viewer, Takehaya was the perfect villain that we could condemn with absolute certainty based on our limited understanding of his motivations. The writers excel at uprooting that mentality and, while I can’t condone the way Takehaya goes about ensuring his group’s survival, I can now understand the reasons behind it. Slattery, who still has no answers about his own family, connects with his captor on this basic level. He finally sees the grief and the frustration driving Takehaya’s extreme actions.

You think you can waltz in here and leverage this crisis to muscle me?
-Michener

The US story line comes to the forefront in “Minefield” and we finally get a better understanding of the powers in play. Regional leadership forces Michener’s hand and demand answers. He tells them the real story about their issues in Asia. The territorial leaders react to the truth by trying to use it to force the President to rescind his ration cards and land claims laws. They argue that violent riots are occurring all over the country.

What do you want to give them? -Shaw
Nothing, except maybe my middle finger. -Michener

You go, Mr. President! I loved seeing Michener lash out to these strong arm tactics with some pointed truths. Apparently the regional leaders agreed to these policies at the outset, and even helped choose Alison and Alex from their own territories. Elections are about to occur and Michener rightly states that it is the role of congressional leaders to either approve or replace the interim laws. Nation building is a curious problem and as a constitutional nerd, I like seeing how the writers think America might rebuild in the wake of a deadly pandemic.

Jacob rears his scruffy red head as he is fed information by one of the regional leaders. Kara has to bribe him to keep quiet, at least until the deadline with Takehaya passes. I still don’t like this guy, but he lends a sense of urgency to the show. If everyone back in the US were playing along and keeping their own secrets, then there would be no political intrigue. Jacob has become a sort of tour guide on the journey to reveal who is scheming against Michener. I also want to know if he has anything to do with the video jamming the administration cannot fix. Even if he isn’t involved, I bet he knows who is.

Like the big, beautiful torpedo explosion at the end, this episode gets everything right. I’m not saying I love the anxiety induced heart palpitations I get while watching, but from start to finish “Minefield” is entrancing. Sometimes it’s the little things, like the look of appreciation Green gives Wolf and Cruz when he realizes they are protecting him. Or the silent communication between Gator and Granderson to wish one another goodbye and good luck. Sometimes it’s the big revelations that change the entire way I look at a character. It is the joy on the crew’s faces when Wolf and Cruz are found alive and the sweetness of the kiss between Chandler and Sasha. I don’t know where we’re headed in the next episode, but the cast, crew, writers and producers should be proud of this one. It literally blew me away.