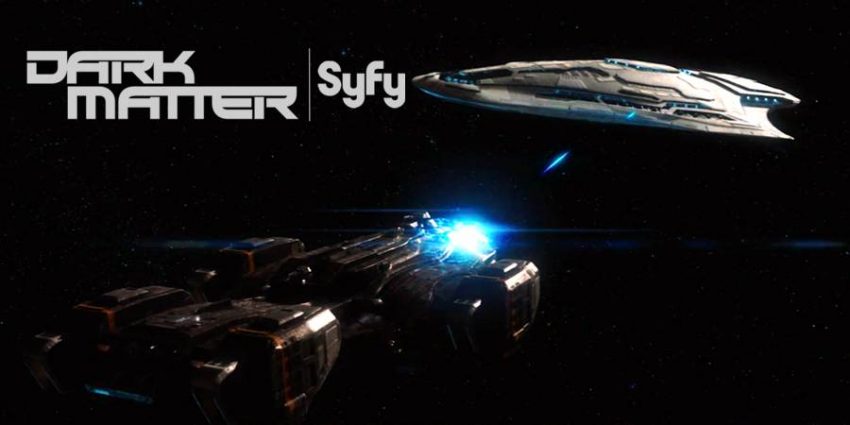 This week, it was Devon’s turn to get a backstory and Tabor Calchek was back, this time in the flesh aboard the Raza.  But before we get to those plot threads, I want to touch on the main story this week.  It involved a mystery that began early in season one with Five and the strange key card.  It was a mystery that intrigued me more than any other.  It’s the mystery of the “pockets of extra-dimensional space” and I’m overjoyed we’re finally getting more about it.

There were a couple of call-backs to season one in this episode.  First, this was another “heist” episode, although I suppose heists are common practice among mercenaries.  Doubly so for space mercenaries.  Like episode ten in season one, the gang break into a high-security facility to steal some mystery technology.  The first time, the tech took out an entire planet, this time … well, this time something completely different happened.

In both capers, it was Five who ultimately saved the day.  Unlike the first time, however, the crew have every confidence in her abilities now.  It helped that they didn’t have to work with a band of murderous mercenaries this time.  Or an even more murderous attack android.

The second call-back was short and funny.  After being subdued by guards, Three finds himself handcuffed back-to-back with Four.  Evoking visions of the time he was similarly tied up with One by Jace Corso, he says, “Aw, c’mon.  Seriously?!”  At least this time there was no argument about sliding vs tilting. 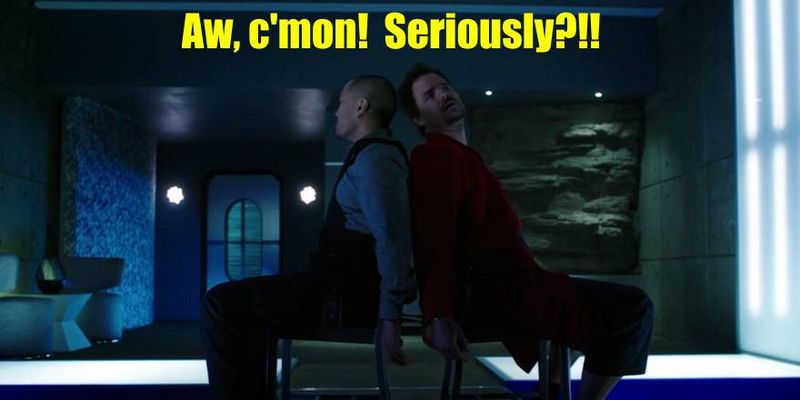 On to the caper!

The means of entering Reynaud’s compound is unconventional, but potentially advantageous.  Transfer Transit is the only viable way in or out, so they “recruit” a hesitant Tabor Calchek to help.  He acquires the tech to set up three pods on the Raza while Five hacks into Reynaud’s security system so they can place an untraceable clone call.

The team of three people ends up being Three, Four, and Five.  Since Transfer Transit only works on organic matter, Two had to sit this one out since there was a risk her nanites wouldn’t be cloned.  Five volunteers to go in her place, which turned out to be the best move once they made it inside.  They had to wear special biosynthetic suits so they didn’t show up on the other end pantsless … or worse.

Android was focused, no, obsessed over how “snug” Three’s suit was.  It was a hilarious moment, especially the last bit when it was clear where her eyes were focused. 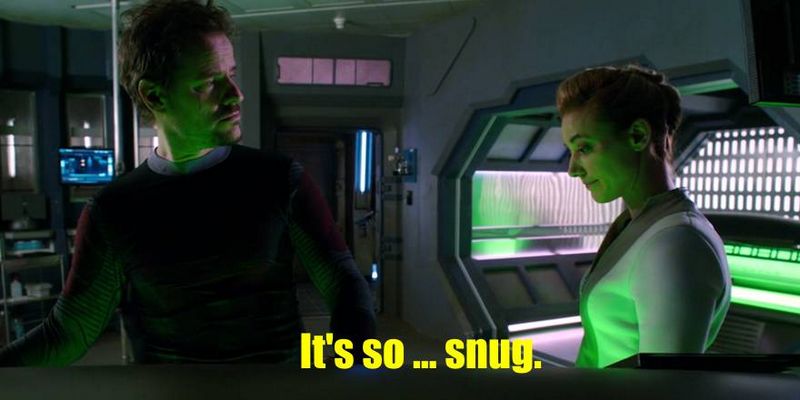 Anyone else have a strange craving for bananas and grapes?  Y’know, besides Android.

The trio enter the pods and make it into Reynaud’s lair undetected. Five immediately takes charge.  Seeing a computer terminal in the room, about all the others can do is hand her cookies while she hacks away.  Five’s in charge now and she’s getting more information than expected.

She learns the mystery card is one component of a “Blink Drive” – technology that can move a ship from one point in space to another in the blink of an eye.  Forget warping space to get from point A to point B, this drive cuts out all that traveling by removing you from spacetime at one point and immediately reinserting you at your destination.  Technology like this would give the owner an unparalleled advantage over adversaries by allowing you to literally pop up anywhere without anyone knowing you’re coming. 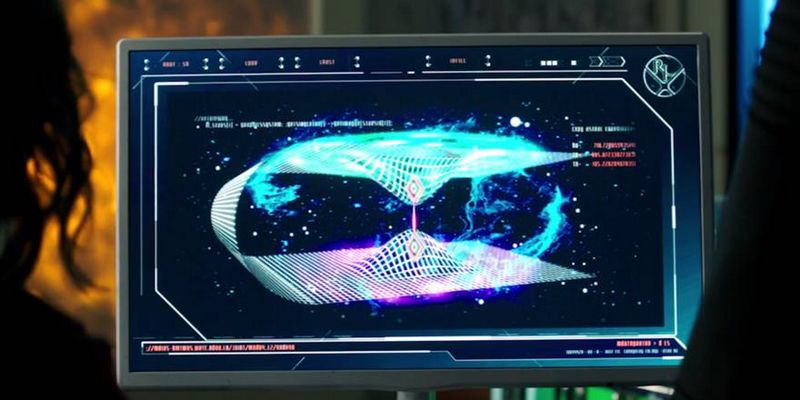 Five also learns the adapter needed to make any ship a Blink Drive ship is in the facility.  When the three go to steal it, alarms go off and plenty of shooting ensues.  Three, in what is becoming less uncharacteristic behavior, tells Five to leave he and Four behind and get the device to the Raza.  Since they’re just clones, their deaths won’t mean much, but having that Blink tech is worth everything.

The kid runs off with the adapter, but to no one’s surprise she ends up in the air vents.  I think Five was a hamster in a previous life.  Three and Four get zapped by the guards and wake up handcuffed back-to-back in chairs where Reynaud lets one of her Extra Large Thugs® beat the crap out of them.  Since they’re clones, they’re not worried about dying until Reynaud tells them she can send an energy pulse back up the Transfer Transit connections and fry their brains.  That would be their original bodies’ brains.  So TT ain’t so safe now, eh?

Once again, it’s Five to the rescue!  She shows up at the door, zaps the thug, takes his gun, and kills Three and Four.

She’s decided the best course of action is to kill their clones, awakening their original bodies.  When the two awake on the Raza, they all agree to let Five have a little more time on her own.  This is not something they would’ve considered in season one and it’s a testament to just how far Five has risen in the eyes of her crewmates. 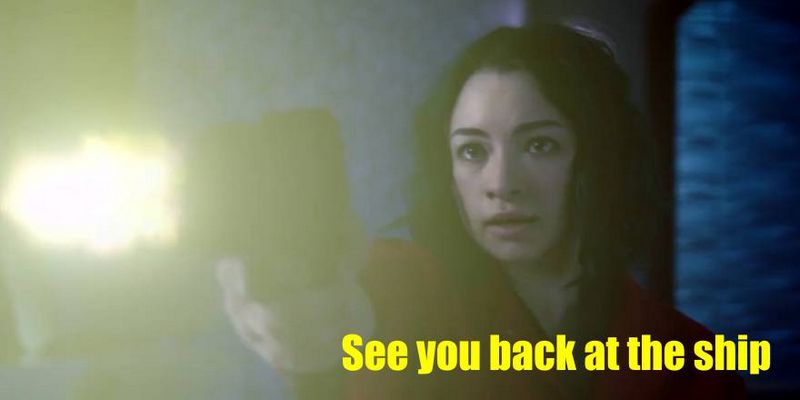 While all this inside snooping was going on, Two and Six have been circling near Reynaud’s compound in case the team needed an alternate means of extraction.  They spot Five’s heat signature on the roof, pick her up, and haul space ass back to the Raza, which is currently under fire from Reynaud’s warship.

They make it on board and the Raza jumps to FTL before Reynaud’s ship can do any serious damage.  CloneFive then gets into a pod so her memories can be transferred to FivePrime and her biomass can be recycled.  G’bye, CloneFive.  You were as badass as your original and we loved the suit.

Question:  Do you have to feed a biosynthetic suit?  Just curious.

The gang, at least the ones still onboard, gather to place their card, the last piece of the puzzle, into the blink drive.  It comes alive with lights and a humming sound.  Android says it’s designed to interface with most standard ship drive systems, so of course they hook it up to test it.  Hey, tell me you wouldn’t do the same damned thing.  I know I would.

With the crew gathered on the bridge, Android activates the Blink Drive.  Something goes wrong, but she can’t shut down the initiation sequence.  The Raza begins to flicker for a moment, then disappears, looking like it literally shrunk away to nothing.  I’m guessing it moved in a physical direction outside of our universe’s three spatial dimensions, which is what made it look like it just shrunk out of existence.

Gone in the blink of an eye (Image courtesy Syfy)

What happened?  Where did it go?  Is the crew okay?  I DON’T KNOW!  But I’m pretty sure we’ll all find out next week, so don’t make any plans for next Friday.

Rewinding back to Tabor Calchek:  The crew hijacked him so they could squeeze him for information about Reynaud.  They believe he was behind the set-up with Alexander Rook, but Calchek swears he had nothing to do with it.  At first, his explanation sounds like a pile of lies, but then he shows them how it would be financially disadvantageous for him to betray them.  I kinda almost believed him.  The guy’s all about making the cash, so if anything he says is true, it would probably involve money.

While we get to see precious little of David Hewlett in this episode, many of his scenes were with Zoie Palmer’s Android.  Android is in charge of babysitting Calchek while the others run the mission.  Their scenes together were fun, proving again that what I’ve said is true: Dark Matter can pair up any two characters and it always works out wonderfully.  Every time a new pairing happens, it’s always one of the highlights of the show and this was no exception. 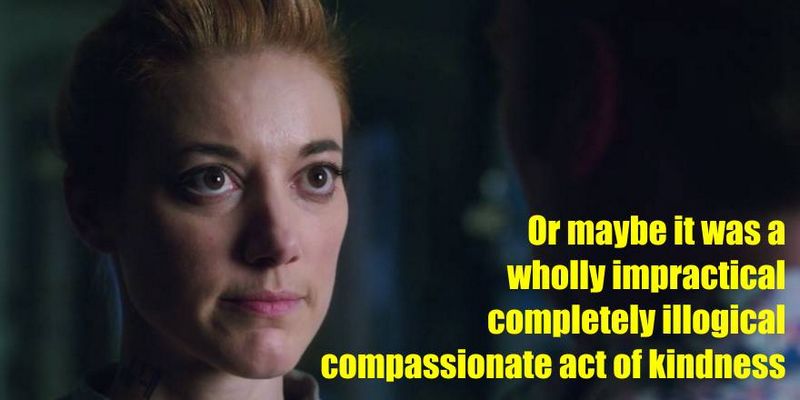 Sleazeball McSleazy figures out Android has some illegal tech upgrade based on her behavior.  While she’s acting mostly like her original self, she’s clearly embracing emotional human behavior a little more.  That becomes obvious when Calchek wonders why someone would program Android with a “flaw” so she’s more human.  Incrementally stepping closer to him while offering several damned good reasons, Android scares the life out of Calchek.  He should be scared.

And in a series of scenes interspersed throughout the episode, we finally get a backstory on Devon.  It turns out he was a drug user long before he lost a patient, the memory of which now haunts him. 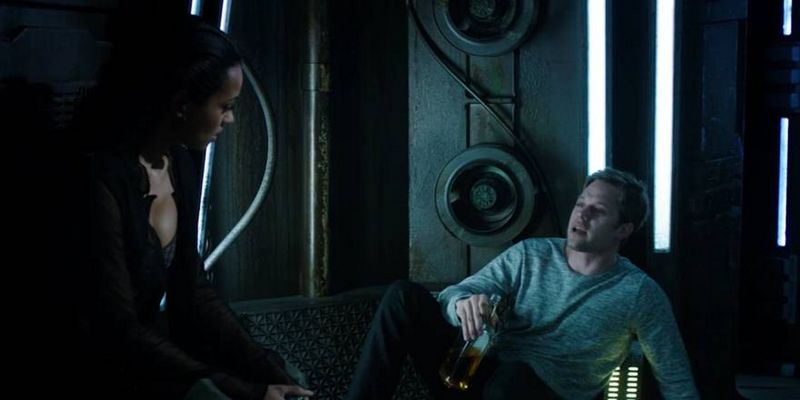 When Nyx finds him drunk in the corner of a hallway, Devon tells her his tragic tale.  He was a ship’s doctor aboard a colony ship.  It was an easy job, affording him plenty of time to get high and just chill.  Then the ship encounters a meteor storm that causes lots of damage and injuries to passengers.  Doctor D managed to patch up everyone while on Shadow except for a badly wounded 12-year-old girl.  By the time she came in, he was coming down from his high and getting the shakes, so he decided to “top himself off”.  Only he used a little too much and was unable to save the girl’s life.

Fast forward to just before the crew try out the Blink Drive:  Devon asks to stay behind on the space station using some bullshit excuse.  Nyx, being the only one to know his secret, insists on going with him.  She knows he’s going to try and find more Shadow to feed his habit and she wants to help.  That is to say she wants to help him stop using drugs.  She insists Devon meet her to continue their conversation.

Waiting at the prearranged location, a bar, Nyx patiently sips her drink.  Cut to Devon in an empty hallway, presumably waiting to make a buy.  Instead of a drug dealer, he’s met by the Seers who seem to know everything about him.  They’re still trying to find Nyx, but Devon refuses to tell them anything except to say, “She’s one of them now”.  (Sound familiar?)

The Seers, unaccustomed to taking “no” for an answer and unversed in polite behavior reward Devon’s silence with a quick stab to the abdomen.  While he lies on the floor of the still empty hallway bleeding out, Nyx continues to wait at the bar for a friend who will never show. 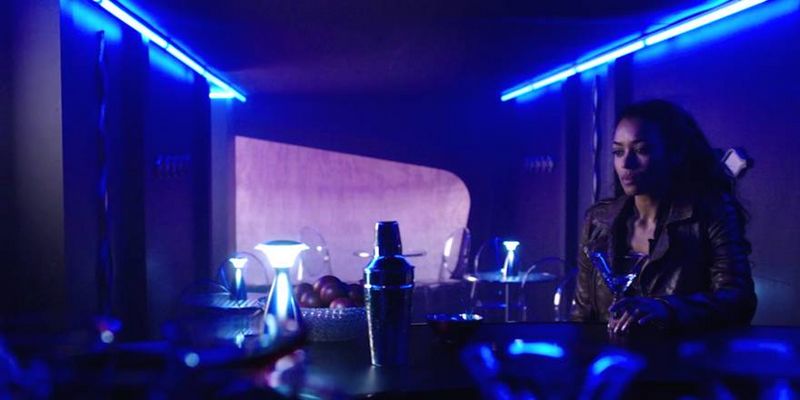 A few other thoughts:

A few other questions: