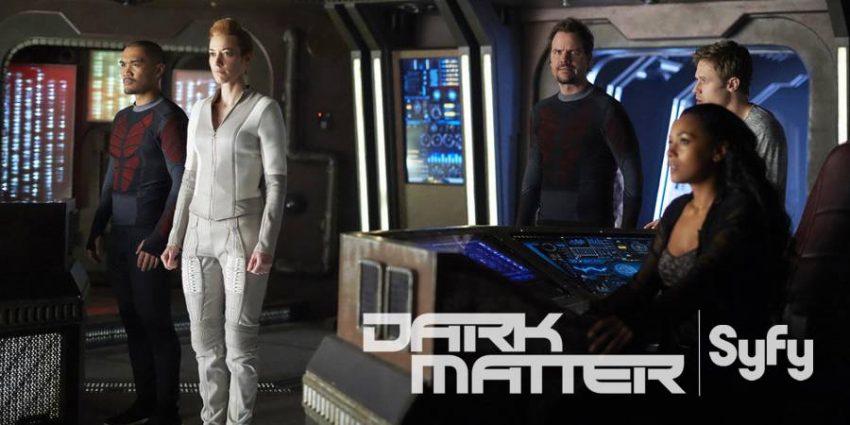 Rejoice, fans of weaselly characters, Tabor Calchek is back in Dark Matter 207 She’s One of Them Now!  But instead of being on the other side of a view-screen, he’s present in-the-flesh with our crew.  The gang are tired of Alicia Reynaud’s Cruella de Vil act, so they crank up the Twisted Sister and decide that they’re not gonna take it any more.  It’s time to go on the offensive against yet another enemy.

With the help of their handler, Tabor Calchek, three crew members infiltrate a high-security facility via clone.

Fans who’ve been wanting to see more David Hewlett will really like this sneak peek, because he’s in the whole thing.  Weasel-boy is on the floor pretending to be unconscious until Two goes to slice off his finger.  The gang believe Calchek set them up in some encounter with Alexander Rook.  Of course he denies it, but they use that leverage to squeeze information about Reynaud from him.

Calchek says Reynaud never leaves her headquarters, only traveling by Transfer Transit clones.  That’s actually a pretty smart move when you’re in the Business of Evil.  Since the only way in or out seems to be via Transfer Transit, the Raza crew decide that’s their best means of getting to Reynaud.  How this plays out ought to be fun.  Having David Hewlett back as Tabor Calchek only makes it even more fun.