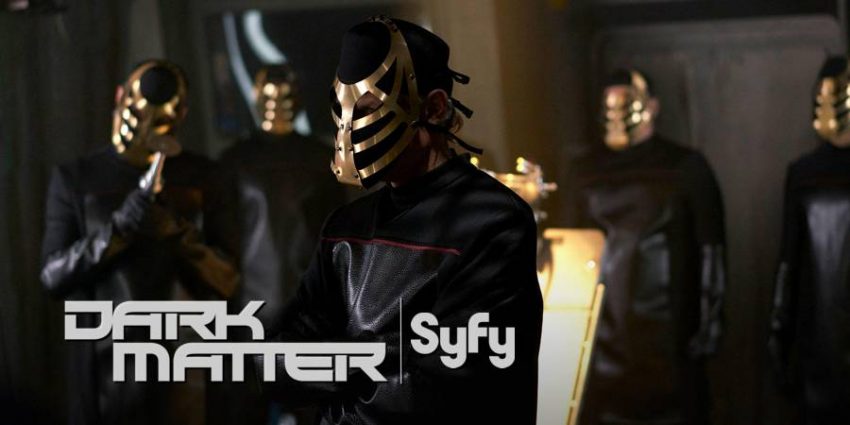 The promo for Dark Matter 210 Take The Shot teases continued exploration of Android and her metamorphosis.  It opens with what looks like the same bedroom Android woke up in at the finish of last week’s Going Out Fighting.  I say “looks like” because it’s a very tight shot of her kissing someone that might be Victor.  And I say “might be” because we only see the back and a bit of one side of his head.  So maybe I have no idea what’s going on there except that Android is lip-locked with someone.

But that’s only the tip of the promo iceberg.  There’s also talk of deleting Android’s personality matrix, I’m guessing because of what comes next – HoloDroid, tells Two she believes they have been targeted by their very own android.  Could this be part of Milo’s predicted betrayal by one of the crew?

We’re pretty much left hanging with those teases for most of a week.  Enjoy!

And once you’re done watching these, check out my review of last week’s episode here: Dark Matter 209 Review: Need A Lift?

The Raza is plagued by dangerous and terrifying hallucinations … but is one of them to blame?

The sneak peek is double fun because we get two Androids at once.  Android has introduced the crew to HoloDroid and the two have a very funny disagreement over the severity of the former’s condition.  Their “logical argument” continues onto the question of who deleted some valuable data ending with Android making a confession.

I have to say, I’m starting to get suspicious of HoloDroid.  I’m wondering if her almost constant insistence on returning Android to factory defaults isn’t part of a plot against our hot chocolate addict.  But there I go being all paranoid again.  Dark Matter will do that to you.