Killjoys Ep. 206 Review, I Love Lucy, and She Has Something To Say!

Killjoys continues to be the highlight of my summer TV viewing!  Best episode of the season (and it’s hard to pick when they’re all terrific!). Because there was a twist to tonight’s episode, I’m going to leave this opening paragraph intentionally vague… if you’ve seen the episode, you can dig farther into the post and find some additional fun material! If you haven’t seen it yet, stop here – this review will be more spoilery than usual.

So, a few comments about the episode first:

I’m really loving these little comedic bits of filling the warrant – the skeevy brothers with their talkboxes last week, and the Hokk 9 dealer this week! It’s fun to see the “professional”, if you can call it that, interaction between the Killjoys and what they’re supposed to be doing. Guess they have to make a living somehow! 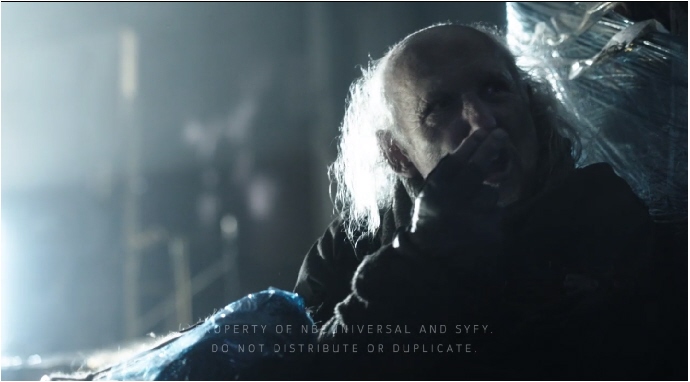 Little bit of Pree this week (but where’s our girl Bellus???) – using his old contacts to help Dutch get her hands on the plasma! “I sense a reluctance and yet a desire to be the center of attention,” she tells him. “I may be able to tap into a contact from the old days,” Pree offers. “Ooh! the warlord days!” D’Avin exclaims. “I prefer stylish dictator,” Pree retorts. Now you all know what to call Thom Allison on Twitter. 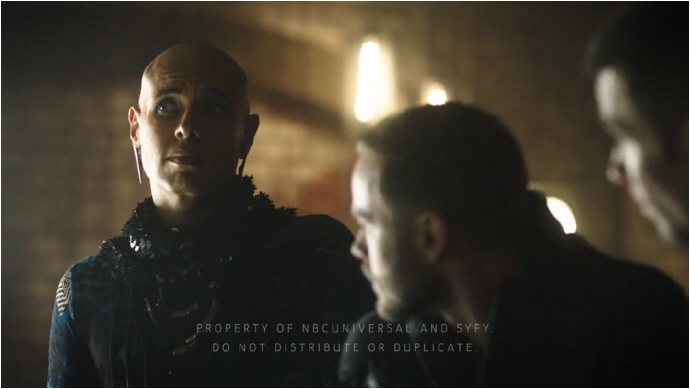 Sam Romwell (played by Keon Alexander) was definitely an interesting character. After seeing the scenes of Dutch and Sam inserted into her song, is there anyone else who kind of wishes that he would come back as a love interest for her? They fit together well, and look terrific together. I’ve got nothing against Alvis – she needs his calm, but Romwell seems to be a worthy mate! 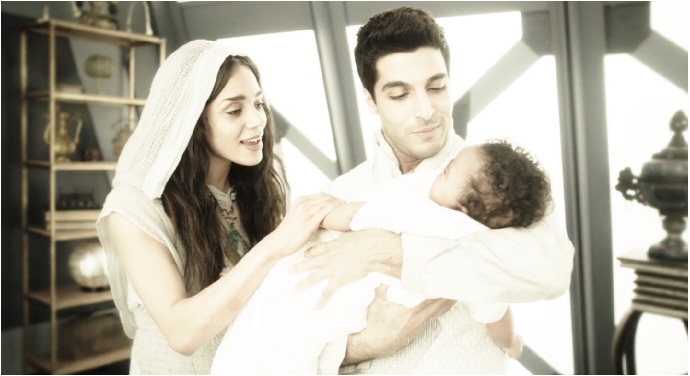 His story about being tortured for information about his planet was another key piece in this huge puzzle. It happened centuries ago, he tells her, and the invaders’ ship “was nothing like we’d seen before, like they’d grown it instead of built it.” First mention of potential aliens in this world? And he tells her later that he heard rumors that the invaders were making their way across the galaxy – how does this fit into “winter or war”? Could they have been the origin of the green plasma? Romwell said he traded for it from them – so it’s existed in the galaxy for hundreds of years. And he knew about the Level 6s – “those troublemakers the Company sends across the Quad.”

We learned a little more – if it’s true – about what happened with Dutch’s husband. Her story to Romwell was that Khlyen had taught her to sing so that she would win the heart of the Prince, pulling her out of the harem. And on her wedding night, the Prince played her sitara, where the strings had been coated with a paralytic agent, while she sang the song Khlyen had written (is this the one that D’Avin hummed last episode that Dutch recognized?). And once the nerve agent had taken effect, she killed him to gain her freedom. Last season, Johnny talked about finding her, half wild, in her wedding dress and covered in blood – so this could be the real story! 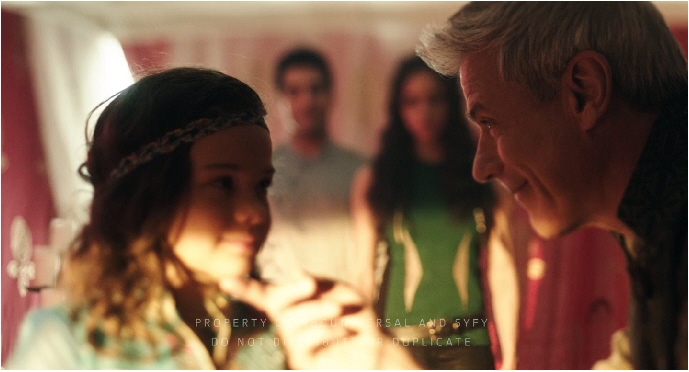 That green plasma really has some amazing properties, doesn’t it? D’Avin is able to manipulate items by controlling it – moving the bowl of goo around, connecting with Mossy (“I’m gonna throw up with my whole mouth. I’ll never step on a bug again”) in a particularly icky scene; using it to hurl the photonic crystal around Romwell’s asteroid spaceship and blow it up – what else can it do? 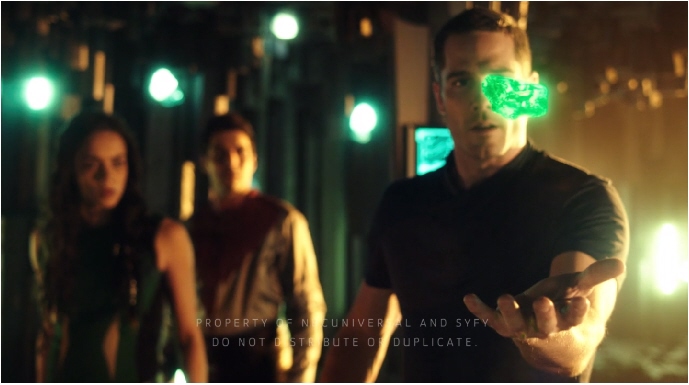 And it shows up in unexpected places, like inside Sabine – what happened there! Did the combination of D’Avin’s rejection of the plasma and their lovemaking cause a fatal reaction? Why was SHE filled with the stuff? Could she have been put there by Khlyen to keep an eye on D’Avin while he was off trying to understand D’Av’s reaction? That’s my theory. 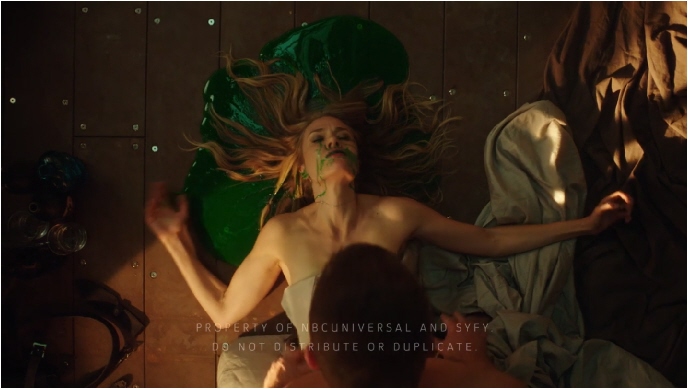 And NOW! Did you figure it out??? Romwell’s androids (ok, raise your hands, how many of you had Austin Powers’  Fembots as your first thought here?) – the one with red hair, the one who becomes Lucy, was actually Tamsen McDonough, the show’s actual voice of Lucy! We got to see her – actually see Tamsen playing a physical role, not just a voice role! I published an interview with Tamsen yesterday, but of course couldn’t give you the major spoiler of the episode (if you read that interview, note the answer near the beginning where she says that Michelle Lovretta would kill her if she revealed too much…), so we chatted a little more about her experiences in this episode.

Did Michelle Lovretta discuss what she wanted to do in this episode with you?

I swear Michelle and her writers and producers would be welcomed into the CIA with open arms with how great they are at keeping plot details a secret 😉 However, it makes it really fun for us as we also don’t know what’s coming.

What was your reaction to having this written for you?

As you can well imagine, I was more than a little excited. I think I’m speaking for other actors as well when I say that we are always rooting for our characters. We want them to realize their hopes and dreams. So, when I saw that Lucy gets to become ‘almost human’ and fully interact with Johnny and the rest of the humans, I was really happy for her (yes, she’s a machine, but she still has a ‘tinman’ heart 😉 ).

If Lucy was a person, do you think she’d be as fierce as this robot?

I think she’d still have the main characteristics of the AI Lucy, like loyalty, sass, and bluntness. But I think she’d understand her mortality (as AI Lucy probably doesn’t) and may be slightly more cautious about wading unarmed into a fight with TWO fembots. 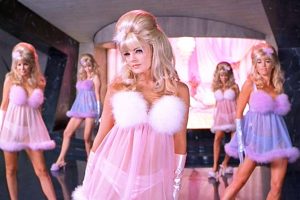 What kind of preparation did you do for the fight scenes?

We had a few sessions in the ‘bash room’ as I like to call it (I got to do some bashing… heheh) with the talented (and more than slightly intimidating) stunt team: co-ordinator, choreographer, and stunt doubles. They’re really good at their job and made it easy to not only learn the moves, but sell them as a robot doing the moves.

I have done stunts that were very passive like being thrown off a building, into a wall or taking a hit. I hadn’t done any scenes where I got to be a badass. Superrrr fun!

Reactions to working on set with Hannah, Aaron and Luke instead of after they’re done?

For actors it’s so nice to be able to act and react to the other people in the scene. And they’re so welcoming and fun. Separately, each of them asked me if I had ‘seen’ Lucy yet. They were excited for me to meet… me, which was very sweet.

Did Lucy like her moments of some kind of physical body?

I think she loved it! I think being human is something she always wants so this was a wonderful dream come true. Though she was more than happy to sacrifice herself for the humans that she cares for, in her own way. 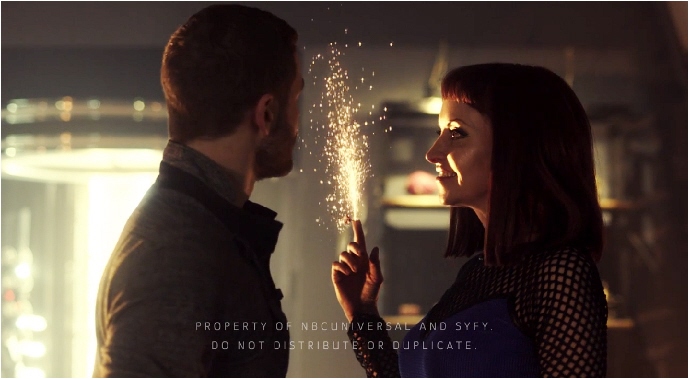 Will it – and the kiss with Johnny – change her in any way, or is she not “conscious” enough to have it make a difference?

I think that because she’s AI it will change her. I think that all data affects how she processes and reacts to human interactions and social situations. She’s always learning and growing.

Do you know how many women (and quite a few men) would love to tell Luke “stop talking, be naked”?

I would hazard a guess at a gabillion. And Luke is hilarious and charming to boot… not fair, just not fair 😉 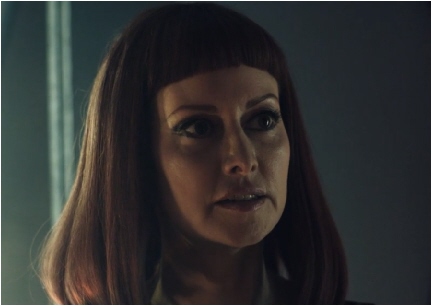 I loved that they made your ‘bot have red hair.

When we were doing the fitting, Michelle, director Grant Harvey and other KJ decision-makers came to check out the look. There was quite a discussion about what to do with my hair: my natural hair, my hair but with pieces added in, a wig, etc. So, it was cool to show up to the hair/make-up trailer to see the red wig sitting on a mannequin head next to my chair!

Thanks, Tamsen, for chatting about your big episode!