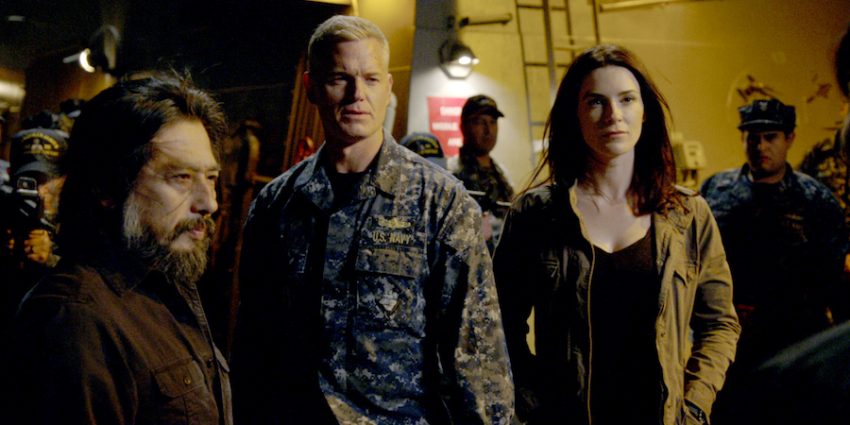 TNT’s series ‘The Last Ship’ is blazing toward their finale with only three episodes left. This week’s show, ‘Scuttle,’ takes viewers on a winding jaunt through issues of nation building, covert power plays, and intense dialogue. Action sequences are kept to a minimum as the crew sets the stage for the final showdown. Along the way, beloved cast members deal with near death experiences, painful goodbyes, treason, resignation, and mutiny. Oh, how I love a good mutiny!

Serious accolades need to be handed out to director Mairzee Almas and writer Ira Parker. Parker is an old hat around this series, having helped produce episodes seven through thirteen. ‘Scuttle’ marks his first successful endeavor in writing for the show. Almas does an impeccable job building the intensity of the episode, driving the story line and bringing out the best from our favorite actors and actresses. Her planning and skill are evident in each scene.

The executive producers scored big when they cast Emerson Brooks as Captain Meylan. While his character didn’t have a lot of time to transform from giddy fanboy into resolute enemy, Brooks manages adroitly. Highlights for me include his ability to rebuff the CNO with just a look – or lack thereof. When Meylan brings Chandler and Sasha in for the court-martial proceedings, Meylan takes his time to acknowledge Chandler’s presence. The scene is heavy with unspoken anger and disappointment.

The writing for Meylan is phenomenal. Putting aside my dislike for him as a fan, the good Captain is a ridiculously well crafted foil for Chandler and crew. Meylan doesn’t have the advantage of three seasons of back story and all the details viewers have absorbed. His suspicion of his CNO and the crew of the James is warranted. As the world crumbled, Chandler had to step outside of typical Naval rules and regulations. His actions and missions are only acceptable due to the circumstances. Conversely, Meylan seems intent on hiding from the realities of this new world and desperately tries to hold on to the old rules. 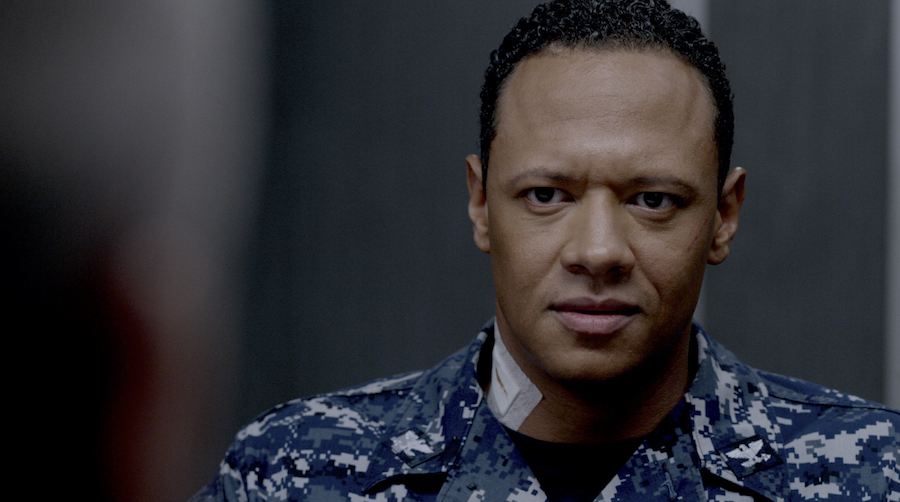 This is my favorite quote from Meylan in ‘Scuttle.’ He’s following standard procedures but the viewers know he’s just made a miserable mistake.

“I expect every member of this crew to perform their duties with the professionalism . . . and determination customary to this ship.” -Slattery

You know what I missed this summer? The *entire* crew of the Nathan James working together. Understandably, executive producers Steven Kane and Hank Steinberg wanted to shake things up and give viewers a fresh story line, but I missed this! Having Slattery, O’Conner, Diaz, and Miller work to get the MA’s keys felt like the good ol’ days. Their subsequent reclamation of the ship is divine. 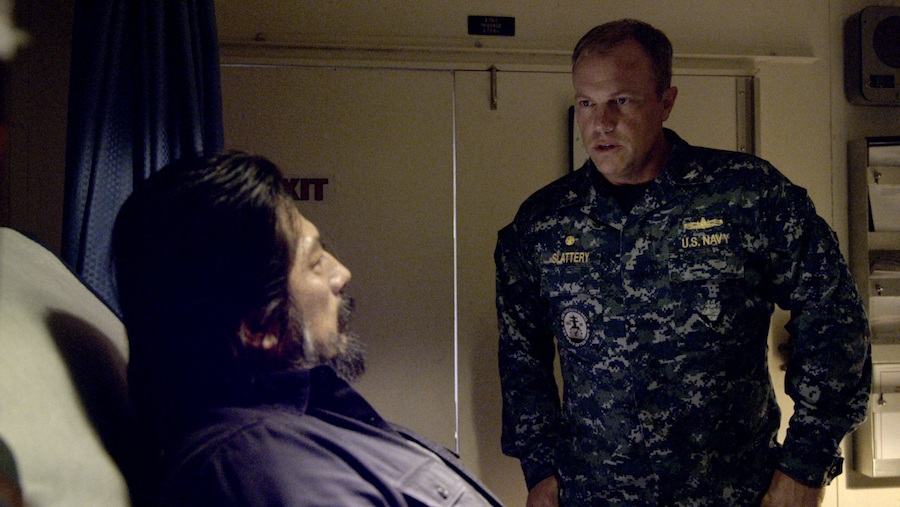 “Circumstances don’t add up. Come on. Order from the Commander in Chief, comes out of the blue for you to break the chain of command and arrest the head of the Navy? Just after we’ve been attacked by the Chinese? You’re smarter than that, Captain.” -Slattery
“I don’t have a choice here.” -Meylan
“Oh, we always have a choice.” -Slattery

One of my most frequent criticisms of ‘The Last Ship’ is the lack of meaningful dialogue for Adam Baldwin. It’s rare to see his character pushed to express emotion but this third season gives more consideration to Slattery’s opinions and resolve. In episode four, ‘Devil May Care,’ Baldwin gives a tear inducing performance. Here, Baldwin’s scene with Brooks made my little fan heart swell with pleasure. He uses just the right amount of force, swagger and grace to get his point across and make a convincing argument. On my list of favorite TLS scenes with Adam, this rates second best. (Number one is his delicate use of an axe in season two) 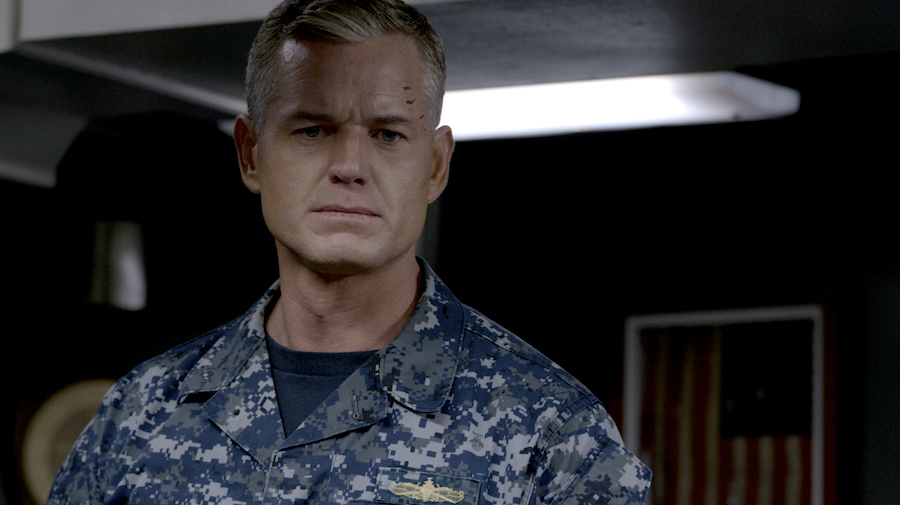 “You need to keep the peace right now. I’ll be counting on you captain.” -Chandler to Slattery

Eric Dane typically plays his character as a quiet, observant man. He only shouts when necessary, which makes quite an impact. But when Dane gives us a quieter, eerily calm Captain Chandler? Holy donut holes. This episode revolves around subtext for our fearless leader, and his ability to convey his true intentions despite what he is actually saying. My favorite example is Chandler’s confrontation of Meylan in his court-martial. When he enters the room and sees the panel across the table, I get the distinct impression Chandler is thinking, “What the flying monkey tails are you doing sitting in my damned chair?”

“I spent half my life in the Navy. Like you I did everything right. Worked my way through the pipeline just to get my chance to lead. Nathan James was my first command. Suddenly, I was thrust into a situation that no one can prepare you for. The world was turned upside down and all the rules were thrown out. But, the Navy taught me many things. Most importantly, it taught me to adapt. I had to make some difficult decisions. God knows I made some mistakes. But never once did I waver from what I knew to be right. The core values that run through all of our veins. Honor . . . courage . . . commitment. I served my sailors as they served me.  As we all serve this great country of ours. I didn’t ask for this. I could’ve taken this uniform off at any time. But I always believed in the work we were doing as a team, and the decisions that I was making as a Captain. And though my tactics changed to address an insane world, my resolve and my dedication to the Navy never faltered. I stand by my record.”

Yes, this is a freakishly long quote to use in a review, but I don’t care. This scene and these lines cemented my unapologetic fanmiration (take that, Oxford dictionary) of Dane.  Ira Parker packs the dialogue with a restrained intensity that Dane delivers with absolute refinement. One of the traits I admire most about Dane is his character development. He created a unique personality for Chandler that stands apart. Unlike actors who play every role as a minor variation of themselves, Chandler and Dane are two separate identities. 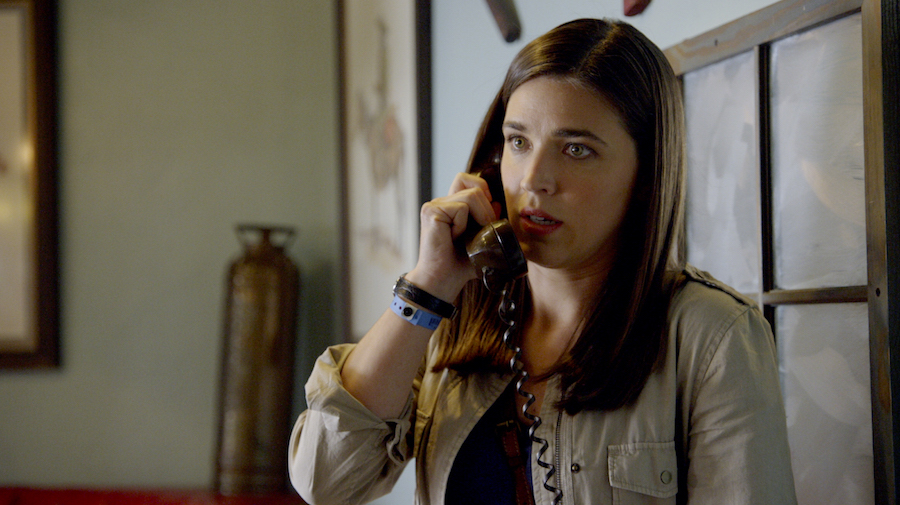 “Guess our Mrs. Green isn’t just a pretty face after all.” -Roberta Price

Season three is marked by character driven story lines. In particular, Marissa Neitling is given the opportunity to develop Kara’s personality. With the demands of motherhood, her job and her national pride at stake, Neitling delivers a well-rounded, beautiful woman. In ‘Scuttle,’ she lends Kara a quiet resolve as she kisses Frankie goodbye in the opening scene, then turns around and moves through the remaining hour like a bad ass operator. I can’t begin to describe my appreciation that the writers and producers provide realistic characters who resonate so strongly with the viewership. 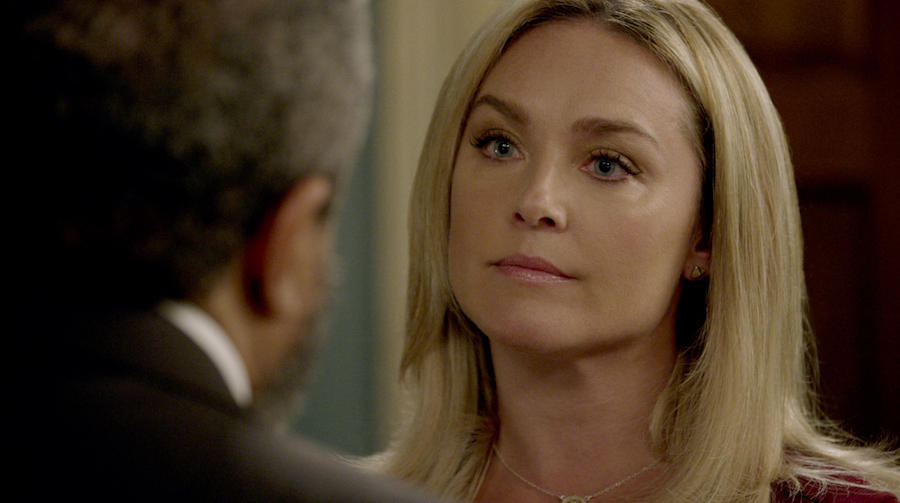 “There are forces at work here, and they are bigger than me.” -Allison Shaw

Speaking of strong, female roles, I didn’t see Allison coming; her deeply entrenched corruption blindsided me. I admit I underestimated the writers’ willingness to challenge their audience. It is rare to find a female villain in television. Women who do fall into the category are often overly emotional, vengeful characters who lack substance. Allison breaks the mold and challenges the Hollywood definition of an antagonist.

A strong female adversary demands a brilliant actress, and Elisabeth Rohm is exceptional in the role. In the last few episodes there’s been a marked change in her demeanor and delivery of lines. Any warmth utilized earlier in the season is gone, replaced with pure ruthlessness. I am in awe of the skill Rohm uses to incite the anger of the fandom; it’s easier to hate a character who causes personal harm to those around them. Instead of physical violence, Rohm wields her dialogue like a sword to cut deep into our hearts.

“Is our relationship about to change?” – Jacob Barnes

If ‘The Last Ship’ were a woman, she’d have curves for miles. The writers keep changing the game just as the audience starts to figure out what’s going on. Friends have become enemies and enemies are now friends. Jacob Barnes pissed me off at the outset and now he’s helping Kara discover the depth of their government’s depravity. The pirates tortured the crew and now aid Slattery in retaking his ship. Captain Meylan hero worshiped Chandler, but is now looking like Tom’s worst enemy. So what’s next?

Peng is still on the run, though not for long. Chandler’s going to hunt him down, but will he ultimately find a friend or a foe in the Chinese President? Back home, President Oliver is pushing back against Allison. Will he continue to push or meet an ‘accidental’ end? The prisons are a shocking development, but I wonder if they’ll be used to keep prisoners in or an uprising out? Seems like a prison might be a good place to hunker down. Whatever happens, I’m counting the days until our next episode while also denying how very close we are to the season finale.