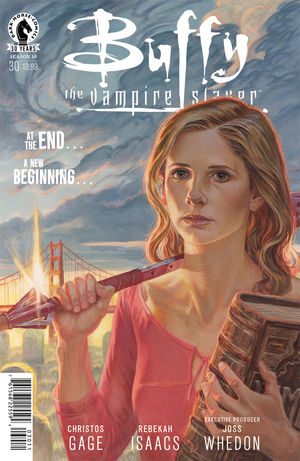 Xander has been turned into a pile of dust. Anya-Not-Anya killed him. D’hoffryn is all mighty powerful and the Scoobies are feeling disheartened. Can they actually turn this around? Buffy season 10 finale is here! This review contains spoilers.

From dust to vengeance

Ghost Anya (who is no longer a Ghost, but a real girl, i mean vengeance demon) has just pulverized Xander and the Scoobies are breaking down in a big puddle of sadness. How could she have done such a thing? D’hoffryn is very pleased with the situation of course, which makes Buffy launch into one of her speeches whilst tears are pouring down her cheeks like a melancholic waterfall. Anya berates Buffy for being stupid, she says it was all her fault for writing down the powers in the book and making D’hoffryn this powerful beast. Buffy continues on shouting at D’hoffryn and ends her speech with a “I wish you would never have been given any of these powers in the first place”. Ah see what she did there? “Wish granted” says Anya and D’hoffryns new shiny powers disappears with a poof! Anya then continues on to make Xander alive again, seems she had turned him non corporal, to make him feel what she did when she was a ghost only seen by him.

D’hoffryn is not happy, not happy at all. He attacks the Scoobies and Anya, killing her in the process. Before she dies, she tells Xander that both her and real Anya has forgiven him.

D’hoffryn tries to get his other flunkies to attack the Scoobies, but Johnathan and co are not impressed by what D’hoffryn did to Anya, so they skedaddle. The now lonely vengeance demon then makes a hasty exit to some sort of General Hospital dimension, where he is being patched up.

He does get very far in his healing process as Buffy and co show up. Seems they got with the smarts and scribbled in the Vampyr book that Dawn can still have the magic key powers on earth too and has therefore opened a portal for the scoobies.

Poor D’hoffryn tries to barter his way out of the suggestions, he offers to fix things. Joyce will come back. As would Tara. Spike would be human. Giles would be a grown up. Xander could get new or old Anya back. But the Scoobies won’t bite and dear D’hoffryn has a close encounter with Buffy’s scythe, that leaves him rather headless.

Looking at the future..

Back at the apartment the Scoobies are discussing what to do with the book. They decide to keep it and form a new magical council, with Giles as the vice president. Willow, Buffy and Riley are all new members. As is Dracula and a rather crazy looking group of demons. Lila Morgan is hovering around trying out her lobbying charms on various demons.

Buffy says she does not really know what they are going to do, but that is life!

Season 10 has come to an end. This has by far been the best season of the Buffy comic, no I am not just saying that because of Spuffy. It has been both aesthetically and intellectually pleasing. The team of Gage and Isaacs and really are onto a winning concept. I am rather excited about season 11. I do hope Spuffy continues on and that Xander and Dawn continues to grow closer. I also like to see what will happen to the more grown up Willow and her future.

I am predicting a pregnancy storyline for season 11, as we haven’t really had much of that apart from Buffy’s pregnancy scare in the previous season. As the Scoobies are growing up, one of them will surely ready to spawn soon. Anyway let’s wait and see shall we!?!