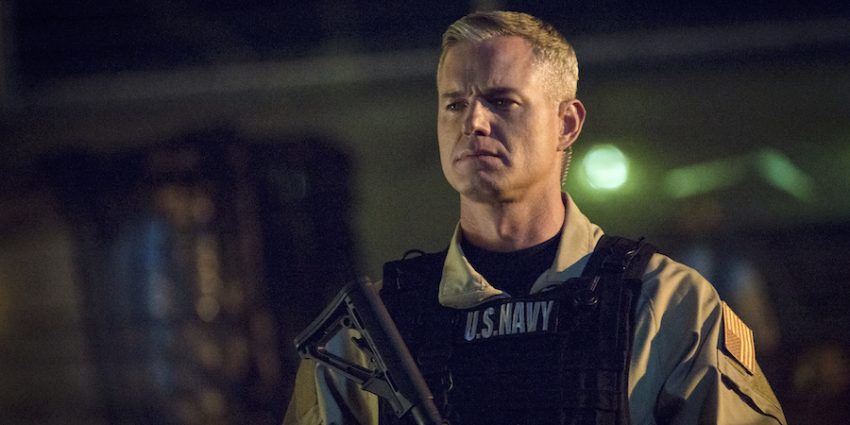 “Resistance” breaks all the rules, and more than a few noses. Unlike previous seasons where the second-to-last episode is used to resolve loose ends, blow things up, and generally kick some ass, the writers chose to keep the action and gloss over the resolutions. Viewers are taken on an hour long ride filled with intense emotions and shocking plot twists. Directed by series newcomer Anton Cropper and cowritten by Mark Malone and Nic Van Zeebroeck, “Resistance” heralds the beginning of the end. 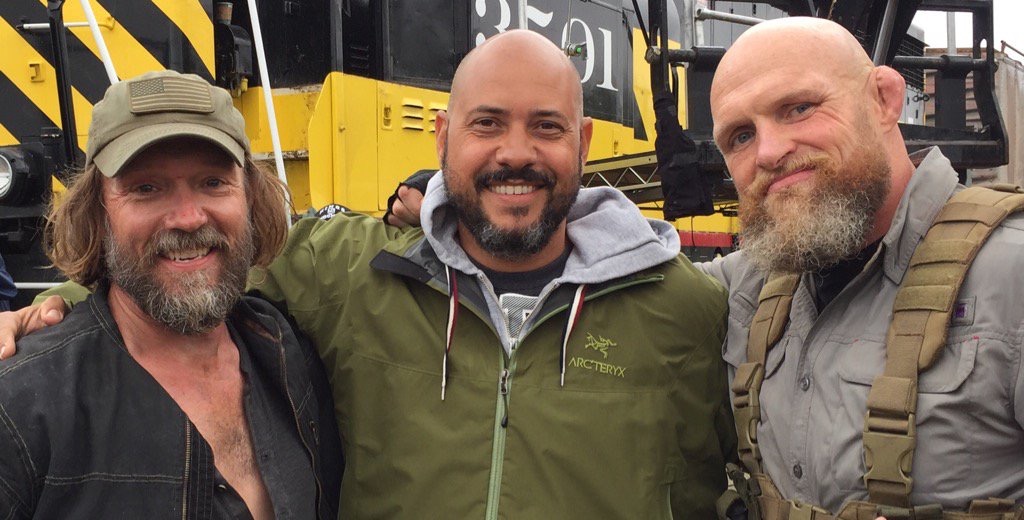 Every roadblock we dodged still had military personnel in uniform. I don’t know why they are going along with this. -Kara

One of my frustrations with this season is in wondering why the military personnel aren’t asking more questions. The writers tackle this issue throughout the episode from Kara and President Oliver’s conversation in the truck, to Bradley’s discussion with a naval lieutenant, to Chandler’s dressing down of the “General”. While our men and women of the Armed Services are trained to follow orders, they are also intelligent, independent thinkers. Americans in general resist following directions from corrupt leadership. The message here appears to be that, in the midst of a global apocalypse, food shortages and general chaos, people will still be people: some will follow while others lead.

The rank and file soldiers and sailors probably don’t know the truth. And they’re just doing what they do because they were trained to. To serve the people. -Oliver

Fighting against the establishment requires an abundance of skill and more than a little luck. In what is one of the best action sequences of the season, Vulture team takes on a rag tag military team.  This season has had plenty of impressive hand-to-hand fight scenes but none with such audacity. Not only did the cast have to deal with the motion of a moving train but all the fighting is done in very close quarters. Chandler and Bradley exchange blows on little more than a ledge and Tex and his opponent are tucked into the cab. This couldn’t have been an easy scene to shoot but the cast and crew’s hard work is clearly visible. 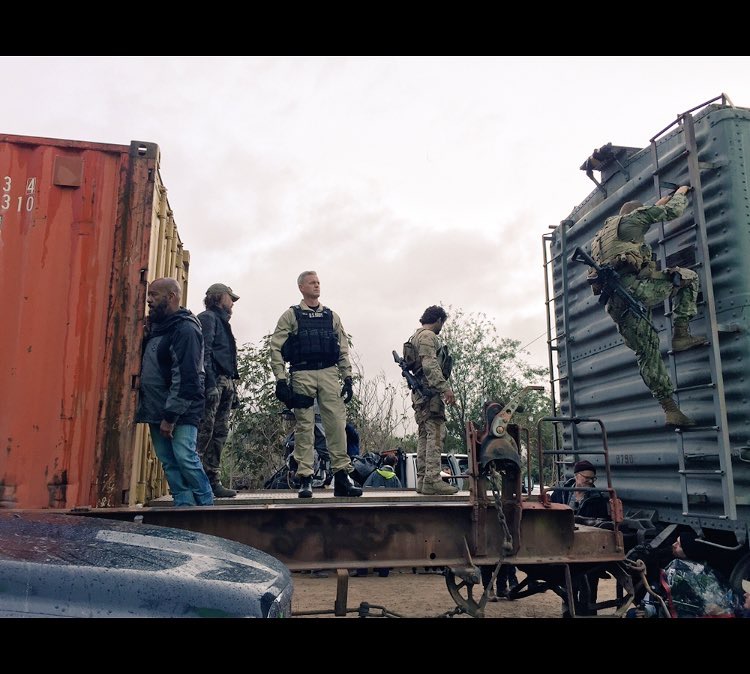 On the train. ‘Resistance’ / TNT’s The Last Ship Ep312. Photo by Triini Selgis.

“Resistance” delivers three reunions viewers have waited for all season long. First, Kara and Danny meet in the rail yard after Kara thinks she sees him die. Then Chandler and Tex find some common ground over Dr. Scott, and lastly the entire crew reunites onboard the ship. ‘The Last Ship’ shook the story lines up this season and separated many of our favorite characters. Multiple story lines were refreshing, but left everyone wondering if we’d ever have the whole crew back together.

This reunion made my heart happy. Travis Van Winkle had to portray Danny as an aching husband and father for most of the season and it was brutal to watch. Danny struggled between the emotional high in the season premiere with the news he was headed home, and the low point of holding Takehaya’s son and not his own. There’s not a lot of room in the story for romance, but the relationship between Danny and Kara remind us that despite the terrors of the world, life does go on.

The breakout performance of the night is Marissa Neitling as Kara. I’ve commented on her incredible skill in reviews past, but she runs through an emotional gauntlet in this episode. From her anguish on the beach, to her headstrong quest for vengeance and finally her wide-eyed confusion when Danny pulls her into the shadows, Neitling successfully conveys strong emotions to the viewership. I freely admit that I bawled my eyes out when she thought Danny as dead, and then again when she realized he was alive. Marissa has offered remarkable performances during all three seasons, but her independent story line this year has really been fascinating to watch.

Commodore, I don’t mean to be rude, but I thought you were dead. -Tex

Out of twelve episodes this one has my favorite Chandler smile. Eric Dane, who plays Chandler with both skill and grace, rarely has the opportunity to show the internal emotions of his character. As CNO and returning Captain of the Nathan James, Chandler has to remain in control at all times. Sometimes, though, the situation warrants a glimpse behind his stoic mask. We saw this in episode five, ‘Minefield,’ when Chandler breaks down after locating the missing crew. Here, Tex’s surprising arrival in the midst of his mission has our beloved Captain grinning.

The Tex-Chandler reunion also presents a unique opportunity to reveal details about how the two men dealt with the death of Dr. Scott’s. Tex admits that he can’t forgive himself for Scott’s death. I almost missed this admission because Tex couches it with his trademark humor and bravado, but this is a crucial answer to why Tex left the group so abruptly. While this heart-to-heart moment was brief, the writers did well not to let it linger. The brevity fits the characters while adding to our greater understanding of both Chandler and Tex. 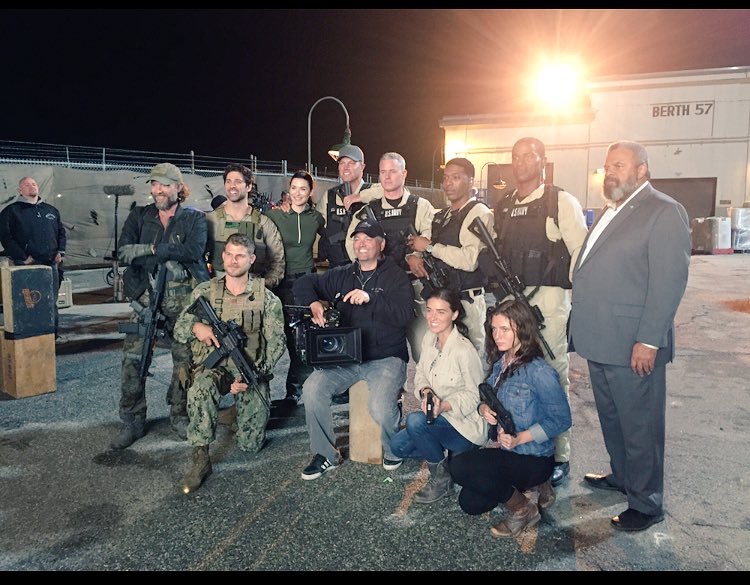 The Cast of ‘Resistance.’ / TNT’s The Last Ship Ep312. Photo by Triini Selgis.

The reunion of the crew was a moment that had me cheering. The writers broke up the story lines to keep the show intense and intriguing, but I missed our combined crew. Kara had to stay back in St. Louis because of military protocol and to care for Frankie. Tex, as much as we love him, wouldn’t have made sense on a naval destroyer now that the Red Flu crisis is over. Still, with all the losses in cast members this season, I think I wanted to have everyone back together just to feel like something in our story had returned to normal.

Still, we’re invading a country with a single ship. That’s never happened in the history of the world and for good reason. It’s impossible. -Meylan
Nothing is impossible. Not if you have the will, the courage and a good plan. -Chandler

I might as well swear an oath to the tooth fairy. -Bradley

The genre of science fiction lets both writers and readers explore ‘What if’ scenarios. These might be questions about how to get food and shelter, what kind of alliances someone would make, or even what kind of world should be rebuilt. While some shows use aliens or robots to draw these answers from their characters, ‘The Last Ship’ uses neither. They simply show all aspects of humanity, which can be frightening enough.

One of the things ‘The Last Ship’ does really well is creating interesting villains. Adversaries reveal our innermost fears and how those fears change over time. Not so long ago television and movies peddled threats of nuclear annihilation while today our enemies wield biological warfare and religious fanaticism. We see the writers utilize these fears in the development of Peng and, back in season two, the Immunes.

Tom Chandler. Saved America from the virus and they loved you for it. Then they got hungry. -Castillo

The regional leadership is a particularly interesting foe for this season. Leadership is fluid among the members and a lack of conviction in their plot is not dealt with kindly.  I think the writers use this group to cut to the heart of many viewer’s fears.  Current political scandals in America fuel a growing sense amongst citizens that leadership isn’t following the rules. This unease makes a secretive, corrupt alliance a perfect enemy as we watch the crew of the James fight back.

While I enjoy the story development surrounding this leadership, I don’t like how the characters are written. There’s the Scotch swigging old white guy (Croft), the two faced hispanic man (Castillo) and the she-devil (Price) from Texas. Each of them seem like exaggerated versions of a cartoon villain. I’d rather have the adversaries written to look, act and sound like regular people. Shaw is an excellent example of this; her ability to appear normal makes her subterfuge even more frightening.

A House on Fire

Parents are often asked by their children who they’d save first if the house was on fire. There’s no right answer to this question; it is a catch-22.  The writers put the larger US military in a similarly untenable situation. The world that they knew is gone and they are forced to choose between protecting their country and protecting their families. Bradley and Chandler go head-to-head over the issue, both coming down on either side of the debate. Nothing is resolved in the moment, but it was unnerving to watch. Do you protect your family at all costs? Or do you risk their health to secure a better future? It’s a miserable decision and, as much as I dislike Bradley’s choice to work with Castillo, I understand his motivations. 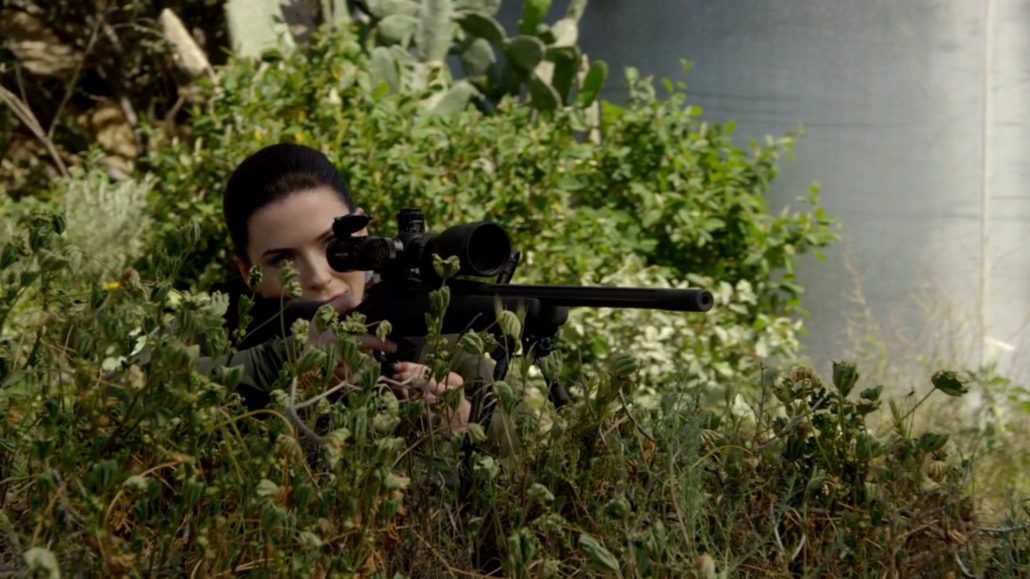 There were so many excellent moments in ‘Resistance’ that you can’t fit them all into one article. I loved seeing Kathleen Nolan (Jade Chenoweth) grow into a funny and heartwarming character, President Oliver and Bob’s quirky interaction, Burk (Jocko Sims) making Castillo’s handcuffs too tight, Castillo’s (Al Coronel) derisive comments about the general public, Sasha’s (Bridget Regan) sniper skills, and the very funny naming of the train ‘Elvis.’ I still didn’t understand why the crew had to hijack the train when they could have just removed the charge, but that’s the only element in ‘Resistance’ that I think is questionable. The balance between action and drama is superb and the message timely. After next week’s finale, the future of the show will depend on how the writers tackle the rebuilding of America and any new threats that they create, but judging by this episode, I’ve no doubt they will do so with aplomb.