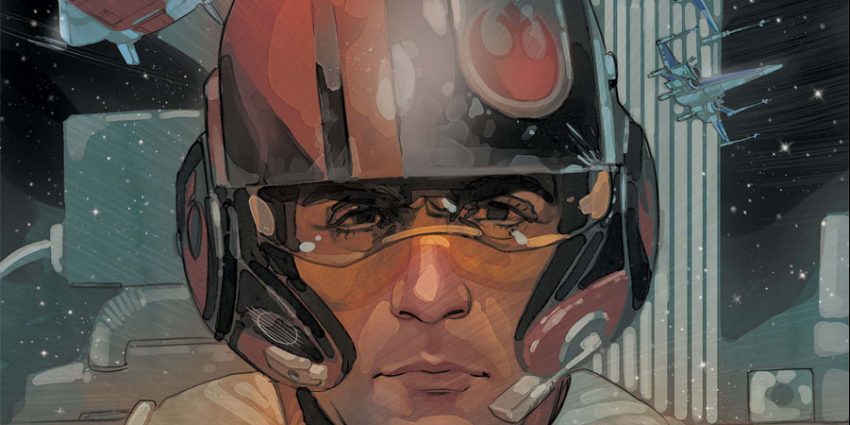 Last April, Marvel released a new Star Wars comic line titled Poe Dameron, which is in relation to The Force Awakens, focusing on the Republic turned Resistance pilot played by Oscar Isaac.  Written by Charles Soule (best known for writing Daredevil, She-Hulk, and Death of Wolverine), and penned by artist Phil Noto (known for his work on such titles as Jonah Hex, X-23, Uncanny X-Force and, more recently, Black Widow), the comics fall into the new canon timeline between the novel Before the Awakening by Greg Rucka and the movie, and brings in backstory for just how Poe ended up on Jakku.  This series also introduces you to the other pilots in Black Squadron: Snap Wexley, Karé Kun, L’ulo, and Jess Pava, and squadron technician Oddy Muva.

Personally, when it comes to comics I give it a good six issues to show me what kind of story is going to be given to me, how appealing the art is, and if the writers captured the character to my expectations.  Spoiler: When it comes to Star Wars pilots – I have very high expectations (thank you Michael Stackpole and Aaron Allston).

So let’s take a look at the story, shall we?

Poe Dameron Issues 1-3: aka What’s Up With the Egg?

As with the beginning of all stories, there has to be exposition: who are the main characters, what is their mission, why is the bad guy chasing them… but I wasn’t expecting one of my questions to be who thought up a cult of people worshiping a glowing blue egg.  Yet, that is the action arc Poe is placed into as he starts the search for Lor San Tekka and information leading to Luke Skywalker.  He arrives on an unnamed backwater planet and before he can start to earn the trust of the settlers, the Crèche, the First Order arrives.  Intelligence Agent Terex had a tracker installed on Poe’s X-Wing somehow, and tracked him to the underground cave, making Poe choose between the settlers and their egg baby savior or turning himself in. Meanwhile, the rest of Black Squadron is in a fighter battle with Terex’s forces on the surface.

Agent Terex falls into the typical intel agent who is too good at his job, and loves the sound of his own voice.  His arrogance is at battle with the snark that Poe Dameron brings to the table and has them fighting more with words than fists.  It’s a good match between them, but my eyes were glazing a bit over at the back and forth between them with a serious lack of action than I was expecting. For instance, they were somehow immune to the affects to the two giant creatures having a title match in the center of the chamber they were too big to fit in during Issue 3.  The battle on the surface filled the action quota, but beyond showing how Black Squadron works as a team, I felt there was no real plot purpose to it beyond filler.

In all, the first three issues did not really do much for me, nor did it live up to the reputation that had been established in the Star Wars world though the Rogue Squadron comic and book series’s.

Poe Dameron Issues 4-6: aka Never, Ever, EVER Make Deals with a Hutt 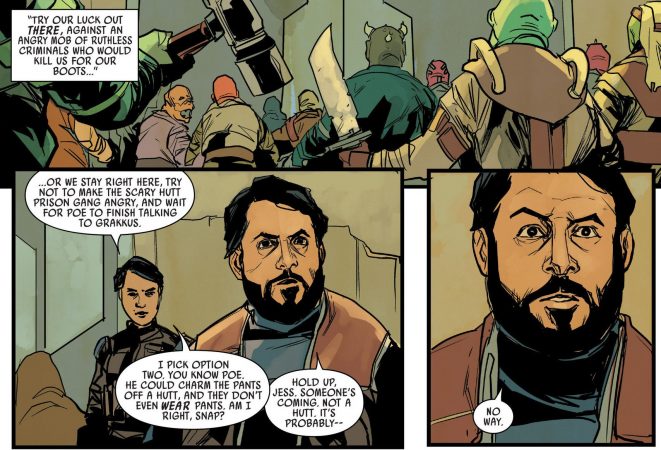 Next stop on the hunt to find Lor San Tekka takes Black Squadron to Megalox Beta, a privatized prison colony holding Grakkus the Hutt. Grakkus was a big collector of old Jedi artifacts back in the days of the Empire before he ended up in the prison.  General Organa paid a lot of money to get Black Squadron down into the colony to be able to talk to Grakkus, but Grakkus has an old friend that paid just a bit more to have their armed escort… not follow them in.

Agent Terex is waiting, and with both the First Order and the Resistence wanting information from him, Garkkus ups the stakes and offers to sell his information to the first man who can break him out of the prison colony.  It’s a race to see who can accomplish the task – or find a way around it.

This storyline was a lot more balanced in action and exposition, and more enjoyable to read.  The members of Black Squadron are really starting to flesh out more, and the interconnecting lines of relationships are showing.  You are able to see how they work together, and how they support each other when not in the cockpit.  Poe is a strong leader, and his knowledge of his pilots is expressed in this arc.

Let’s just say that my favorite part of this issue was Operation Upside, in which the Black Squadron droids, led by BB-8, are working to take down the security of the prison colony.  Just like each pilot, each droid has their own skill set and personality that they bring to this team effort to save their pilots from certain death.

Of course, the big question left at the end of this issue is this: If the egg worshiping Crèche only told Poe about where Lor San Tekka went – how did Terex know where to go?  Sounds like the Resistance has a mole, if you ask me.

So what’s my take on this series? Aside from the slow start, I see this series moving in a more positive direction with a balanced story and character development to make Black Squadron as loved by Star Wars fans as Rogue Squadron was, and still is.  The hints of snarky dialogue bring a refreshing and realistic voice to the pilots that keeps you entertained as well as seeing them as well-rounded characters.

If you are a fan of Star Wars and enjoyed The Force Awakens, you will want to pick these up and give them a read now, or when they get released in the trades – though I would suggest hunting down a copy of issue one just for the bonus comic of BB-8 at the end.

Poe Dameron Issue 7 will hit on October 26th, 2016, so you have a few weeks to catch up before we discuss the next issue.  See you then!