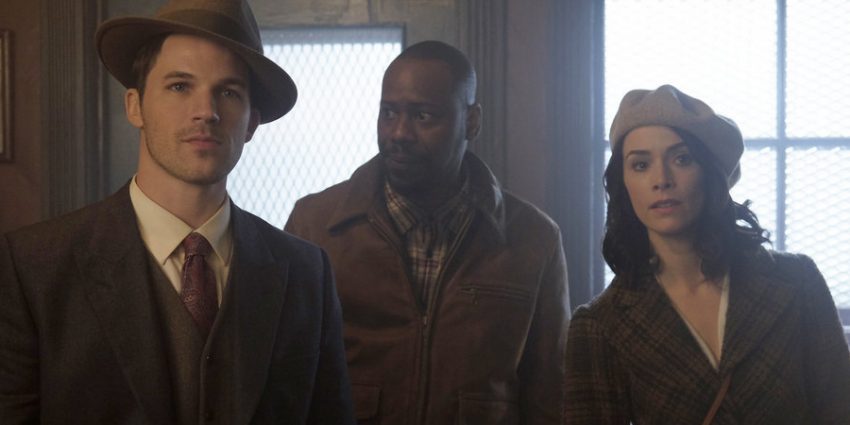 TIMELESS: From Eric Kripke (“Revolution,” “Supernatural”), Shawn Ryan (“The Shield”) and the producers of “The Blacklist” comes this thrilling action-adventure series in which a mysterious criminal steals a secret state-of-the-art time machine, intent on destroying America as we know it by changing the past. Our only hope is an unexpected team: a scientist, a soldier and a history professor who use the machine’s prototype to travel back in time to critical events. While they must make every effort not to affect the past themselves, they must also stay one step ahead of this dangerous fugitive. Can this handpicked team uncover the mystery behind it all and end his destruction before it’s too late? – NBC Website

In looking at Timeless, it makes me miss the days of Quantum Leap, where the hero would jump into the past, “putting things right which once went wrong”.  Of course, there is a lot less body jumping in Timeless, and no Scott Bakula.  Instead, the team of three are sent back to stop Garcia Flynn (played by Goran Visnjic) from changing the past.  The lady to accomplish the job is Lucy Preston (played by Abigail Spencer), a historian who has an unknown connection to Flynn’s motivations.  Accompanying her into the past are Master Sergent Wyatt Logan from the US Army Delta Force (played by Matt Lanter), and engineer / pilot Rufus Carlin (played by Malcolm Barrett).

NBC released a new video with a first look at Timeless from the eyes of the cast and creator along with some scenes clips.  As always, be aware there are some SPOILERS in the video for the premiere:

FYI – going from this alone, I think Rufus is going to be my favorite character in Timeless.  But I do have a weakness for pilots.  And he is one.  Sort of.

What I’m going to be looking at: as with any time-travel story, the biggest rule that the writers have to follow is on how any action of the time traveler in the past will change the present that the traveler is from.  I am going to be paying attention to how well they work with this, since time travel needs to have consequences.  I’m also going to be interested in the history of the events they are going to be placed in – details like that will show the level of research put into the story.

The one thing that Timeless has going for me is that it’s an Eric Kripke show with him as one of the main writers.  I love Supernatural, and my favorite episodes are all ones that he had written.  It gives me hope that the writing in Timeless will be just as good with similar pacing with the overall plot and character arcs over the season while keeping a “mission of the week” story line.

Only three more days to find out if Timeless is worth the hype.  Are you ready?  I’ll be live-tweeting during the premiere on October 3rd at 10pm EST / 9pm CST, so come join me and tell me what you think.  See you then!