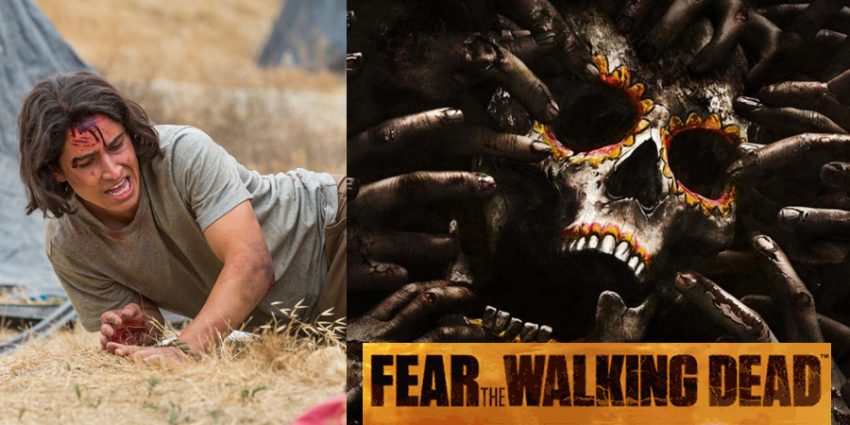 Well folks, it’s over for another season. It flew past so quickly! I loved season 2 of Fear The Walking Dead! It was so much more than everyone thought it would be. I have learned that you either love it or hate it, and I am a lover! In my opinion, the 2 episode finale, finished the season with a BANG!

Within these 2 episodes, we saw the death of Chris, and the rebirth of his father Travis! The build up to bad boy ‘crazy’, Chris started way back in the first season. I didn’t like his character then, and I sure didn’t like hwhat he became over the course of the 2 seasons. He was always a brat in my opinion. Yes’ I know, he came from a broken home. His mother worked full-time and his father was never around. His whiny, “oh poor little me” nature sucked and I felt he was trouble all along. Chris took to killing, like a fish to water, and nobody knows what would have happened with him in the future. Serial killer, non-empathetic loser, who bucks all authority. His death was needed in my opinion to bring out the best/worst in Travis. 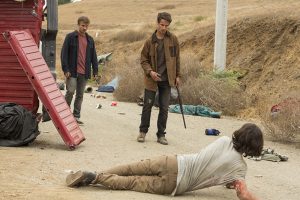 When Chris found his new ‘buddies’, he slipped even further from Travis’ grasp. He needed them. He needed to feel like he mattered. He echoed their thoughts about no law, kill or be killed. He was ruined and there was no stopping it. So Chris’ demise at the hands of two little creeps, did not surprise me in the least. It was sad that Chris didn’t listen to Travis, but teenage angst, you know what happens. Travis did start out the opening season as a nice guy, but that was the problem, he was TOO nice. This season we saw his struggle. All he wanted to do was help his son. Everything he suffered through, was for Chris. Leaving his new love, Maddie, was just the beginning. Killing the two ‘brats’, that killed his son, well, that was just necessary. 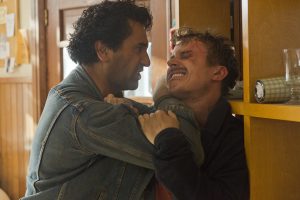 I am glad that the past few episodes brought Maddie and Alicia closer. Maddie’s almost obsessive need to take care of Nick, is getting ridiculous. We were all tired of her ignoring the child she has right in front of her. Alicia is strong. She had to be, She was left out of the family in so many ways. But they finally figured it out in the end and I am glad that was settled.

Nick is another story. He went from junkie to leader, in the span of a season and a half! I like the way his storyline has evolved. I felt sorry for him in the beginning, but now I am proud of him. He is very intelligent. Far more than anyone gave him credit for. And he figured things out early on. To end up leading the people of Colonia to a new place, was not a small accomplishment. What happens to Nick throughout the season was telling. He survived. By using walker gore, he was invisible. He found a place to be himself. He transformed into a leader. He fell in love. But what will Nick do now, that they are being attacked by unknown forces? I can’t wait for season 3. 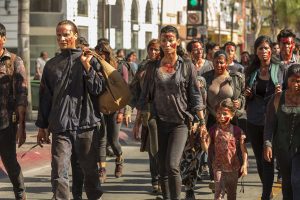 I really like how they wrapped up the story of Colonia and Alejandro. That man was a creep from the first, and I think he got his due. He did redeem himself at the very end. It was fitting that the gang got their just dessert too. And in an epic way. Their plan to take over the colony, failed terribly, and resulted in them becoming walker food. I love that the leader turned. 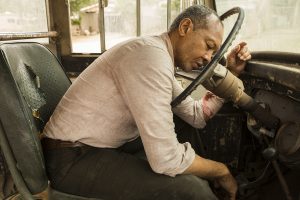 We were left at odds with Strand. Once the big bad, mysterious dude, he turned into a bit player the second half of season 2. His mystery died with his boyfriend Thomas, and although he tried being a powerful force, I think the character failed. His slight crush on Maddie, showed, and his failure to escape the hotel compound with Maddie, Travis and Alicia, is quite puzzling. Maybe we will see something different from him in season 3. 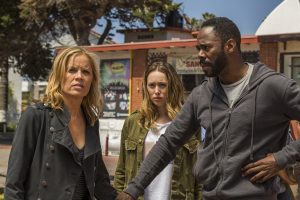 Ofelia has her own problems in the end. Being caught by someone, just after she makes it to the US. She is on a mission to find her boyfriend. Maybe in season 3 we will find out more about him. She has also evolved to a bad ass babe in this ZA. We thought she was meek and mild, but she has proven us wrong, in just the last few episodes. 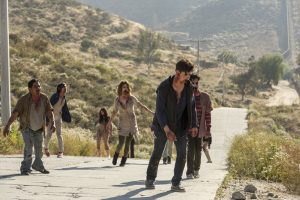 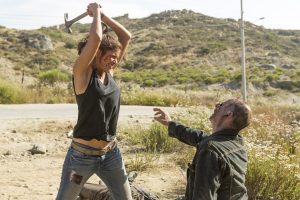 All in all, I can truly say that season 2, was pretty darn good! The character development took some time, but was worth the wait. The action grew more intense and the ‘omg’ moments were many. Any person who was not a fan of the show, remarked how much they grew to like it! I am sure that when season 3 swings around, there will be many more viewers! What did you all think of the ending? Leave a comment and let us know!