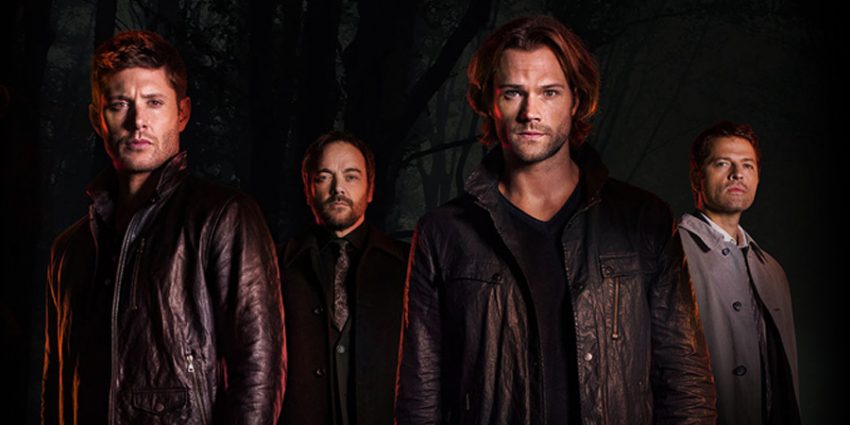 The Road So Far…

When we last left the Winchesters in season 11 of Supernatural (available here on Amazon), they were all dealing with lady issues.  Castiel (Misha Collins) was angel-banished from the bunker by the mysterious member of the Britain branch of the Men of Letters, Lady Antonia “Toni” Bevell (Elizabeth Blackmore).  Toni then turns around and shoots Sam (Jared Padalecki).  Meanwhile Dean (Jensen Ackles) has his own problems as he has been given a very special gift: his mother, Mary Winchester (Samantha Smith).

But hey – no one died at the end of the season.  That’s a good thing, right?

The short, short summary of these two episodes: Dean helps Mary adjust to being alive and the future while trying to find Sam; Sam is tortured for information about the American hunter network; and Crowley is trying and figure out where Lucifer is, and who he is hiding in, to be able to trap him back in the cage so he can regain control of Hell.

Keep Calm and Carry On

Dean starts off his reunion with Mary by getting thrown and arm-locked by his mother who doesn’t recognize him.  He must help Mary handle the truth about her death, making her believe that he is her son, and that she is 33 years in the future from when she last remembers. He spends the night explaining about how John raised them and a cliff notes version of Supernatural Seasons 1-11. I love this scene because Dean rambles off a monologue about how Mary and John met and got married, information that we never had before.  I’ve been a fan of the series since the first episode aired live, and it’s rare we get family backstory like that anymore.

Also, for those keeping count, Mary being dead for 33 years means that Supernatural  Season 12 is set in 2016 – which is helpful since the last few years we have been losing and jumping time. I know I’ve lost track of where we are on their fictional calendar, so getting a year drop shows that they are back to airing “in real time”.

I also love the bit with Mary seeing Baby again for the first time, and how her fingers run along the Impala gently.  She takes a nice, long look at the backseat, Dean on the other side smiling… and then realizing what she is remembering and AWKWARD.  It’s a bit of the old Supernatural humor that we love, and starts to show us how much Dean is like his mother.  Castiel and Mary bonding is also sweet, a reflection of Mary starting to go through the education that Castiel did over the last eight seasons. 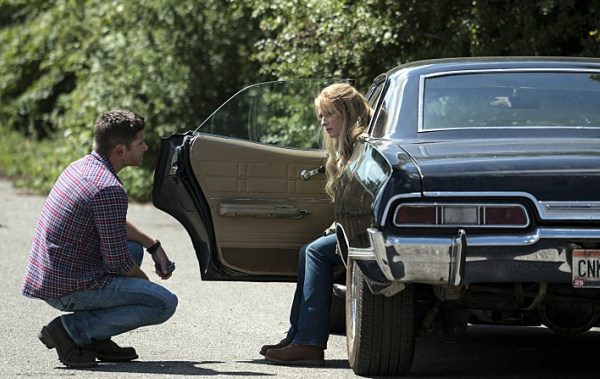 Poor Sam.  Toni and Ms. Watt (Bronagh Waugh) needed to get an SUV and put the back seats down to transport the moose since he’s a bit too big for your regular trunk.  I must say, I’m with Sam on the whole “screw you” position on helping them.  You don’t shoot, kidnap, and threaten to torture someone when all you want to do is have a talk.  Sam has amazing mental strength though in dealing with the torture – thanks Lucifer? – and not budging on his position with everything he is put through.

This London Men of Letters branch is so not Torchwood.  Toni is dangerous: she has that air to her in that she firmly believes  that she is right, and that the Winchesters are a lost cause.  They have an extensive, detailed dossier on both boys, including information that you don’t think they should have – like Sam sleeping with Ruby, or Dean’s friendship with Benny.

Britain, per Toni, has been monster-free since 1965, and they want to work with the other US hunters to do what the Winchesters can’t and make America safe.  Toni sees herself as being in the right to have Ms. Watt torture Sam to the point of near death to get the information she needs, and shows no remorse about it.  There is also the hint of a man with a cross on his hand, Mr. Ketch, that will become more relevant in the next episode, but he is presented as being a psychopathic monster cleaner for this organization.

Mary killing Ms. Watts to save Dean was a good reminder that she may be a bit behind in the times, but she is still a hunter and useful to the team.  She never wanted this life for her boys, but Dean reassures her that they are okay with it because they make the world a better place.  Dean wanting to protect Mary from getting hurt or killed again is going to become an ongoing theme this season, I fear.

Sam, meanwhile, reminds us all how tricky he can be when he needs to, faking a suicide from the voices to get Toni to open the door so he can try to escape.  It almost works, too, but he wasn’t counting on the cattle prod.  My poor moose – he doesn’t even know his brother is still alive at this point, or that his mom is back, and if he will make it out of that room alive…

… or into Toni’s bed with the naked funtimes?! Thankfully it is only a hallucination otherwise I would seriously have issues with Sam’s sex life.  Though, according to the unwritten rules of the Supernatural world, it would also mean she was marked to die which I don’t mind so much.  Toni is shaping up to be an amazing villain this season, and while I don’t like what she’s doing to my poor moose, I love her character.  It also makes me miss Bela Talbot (Laura Cohen) from season 3 and her relaxed, down to business attitude and playing off the boys as an antagonist.

While trying to find a new lead on where Sam can be, Dean asks Castiel for advice on how to talk to his mom… adorable.  “Don’t make things needlessly complicated like you humans tend to do,” is the best advice that the angel can give.  Mary reveals that she is more worried on facing Sam when they find him, which I can get. After all, she is the one who made the deal that sent Sam down the path of having demon blood.  She’s also adamant that she is not going to sit back and wait, going with Dean to rescue Sam.  Dean admits that Sam got out of hunting, and there is just a hint of guilt on Dean’s face when he tells Mary about why Sam came back. 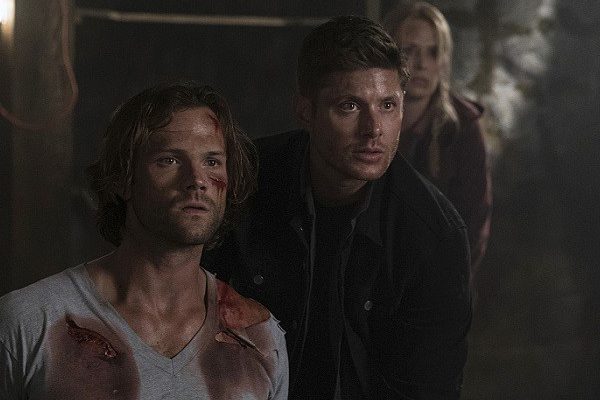 Where they are holding Sam has been warded against so Castiel can’t get in, so Dean goes in alone and, in typical Winchester fashion, gets captured and tortured.  Luckily the boys have their mother around to come in and save them!  Toni is versed in a lot of mind control spells, adding to her danger level, but Dean’s read a book or two and knows how to counteract them – knocking the spell caster out!  At that point Toni’s boss comes in, ending the conflict and vowing that Toni will be reprimanded back in London for what she has done here.

Also in this episode, we also find out where Rowena (Ruth Connell) has disappeared to: she has become arm candy to a rich man who doesn’t have long to live.  She’s very happy with her fake life until Crowley (Mark Sheppard) tracks her down and demands a spell or he will ruin her happy life.  Crowley wants to regain control of hell, and knows that they need to put Lucifer back in the box to do it, and he needs Rowena to do that.

He wants to find Lucifer who is honing in on a new vessel – aging rockstar Vince Vincente (Rick Springfield).  Coming to Vince in the guise of his dead wife, he tricks Vince into saying yes to let the archangel in.  He heads back down to Hell to find Crowley on the throne, trying to push a proposal for Lucifer to go after Heaven while he rules over Hell.  Rowena tries to do the spell but it doesn’t work, and Crowley leaves her behind to escape the Devil’s wrath.  Lucifer knows that Rowena is valuable, dangerous to him, and decides to keep her as prisoner in Hell. 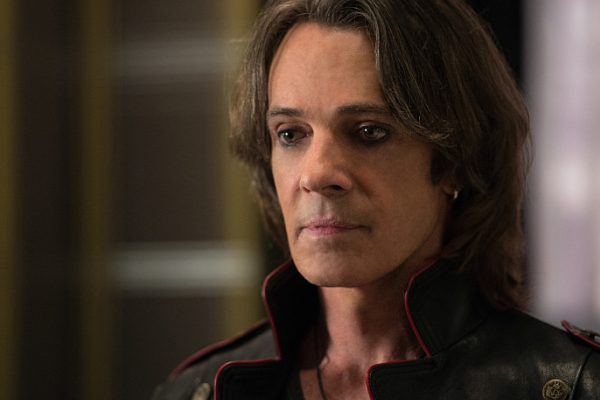 After they are back in the bunker, the boys are adorable as Mary watches them together.  Plus, Dean is in a good mood because he happily digs into his pie much to Sam and Mary’s amusement.  Later, though, is my favorite scene with Sam and Mary.  Sam knows what it’s like coming back, and about having blanks to fill in.  Luckily, Sam can give her John’s journal to help give her some of the answers, as well as giving her a piece of her husband.  You can also see that Sam is finally at piece with being a hunter. Then you get the trademark Sam Winchester puppy eyes as he tells his mother that he is glad to have her back because she fills in the biggest blank he has.

No really, that’s just dust in my eyes.

The episode ends on a dark note, though, as Mick reveals that he has sent for Mr. Ketch to come to the US to help with the evaluation of the US hunter network. We still don’t know his face, only his hand, but he’s bringing a small armory with him when he arrives.

The mindset of the Britain Men of Letters reminds me a lot of Gordon Walker (Sterling Brown) back in seasons 2 and 3, and his persecution of Sam once he learned about the demon blood in Sam’s veins.  He mentioned back then that there were other hunters who felt the same way – like Roy and Walt from season 5 ”Dark Side of the Moon”.  If Toni and Mick can get these hunters organized, trained, and put the Winchesters on the monster hit list… I fear for their safety.  The boys have been given an olive branch to join Toni and Mick in their mission, but I don’t see that happening anytime soon.

The reaper Billie has warned the boys that death for them is now permanent, so keeping this from happening should be a high priority for them.  Their list of hunter friends who are still alive, though, is small so it will be interesting to see how they will accomplish this.  They may have a few angels on their side, but there are a lot more who will sing to the Heavens when they die.

I just hope Mary doesn’t die. Supernatural is known for killing off female leads once their plot arc is done, but after everything that the Winchester brothers have been through in the last 12 years – they need a little good in their life.  I think there is a lot of potential for Mary in the show, taking over the spot that Bobby and Ellen had held as being someone to not always hunt, but to organize and assign out hunts as needed.  That would also be vital to organizing the US hunters before the Britain chapter gets too entrenched in the states.

Either way, there is a lot of places Supernatural can go, especially with the main villains of the season arc being humans.  I’m looking forward to seeing where the writers take it.

Like what you see so far? Follow @ThreeIfBySpace or me, @AliSkyRichards, on Twitter to keep the discussion going, and even catch us live-tweeting episodes during the season.  Subscribe to the blog so that you are always on top of Supernatural news, as well as your other favorite genre series!