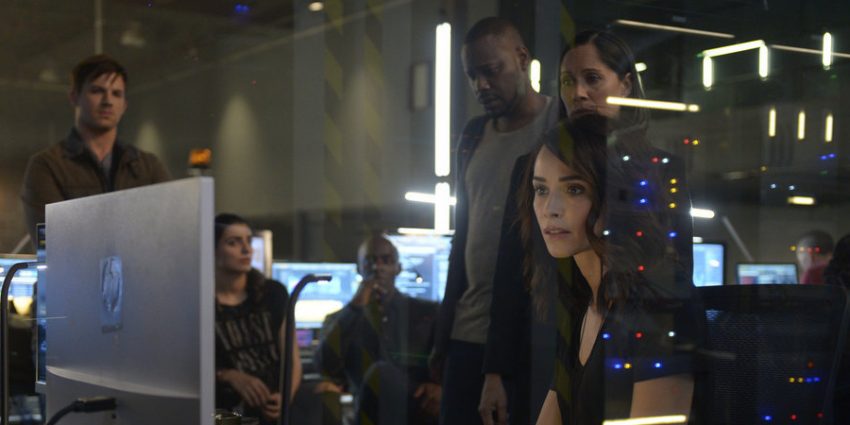 Timeless Review – “Atomic City” and the Fallout to Come

This week, Timeless takes us back to 1962 Las Vegas during the Rat-Pack era.  Flynn (Goran Višnjic) has the team on the run with the era’s most infamous mistress, Judith Campbell (guest star Elena Satine). During the restless, neon-lit night, Rufus (Malcolm Barrett) meets his old mentor Anthony Bruhl (guest star Matt Frewer), whose motives may be darker than anyone suspected. Meanwhile, Lucy’s (Abigail Spencer) personal life is falling apart, Wyatt (Matt Lanter) attempts to change history for himself, and we discover Flynn intends to gamble with far more human life than we realized.

Timeless did an amazing job portraying the time period.  The costume team deserves so much recognition for their attention to detail.  Even the extras in all the scenes are dressed to match the time period.  Add into it the set design rebuilding chunks of the famous Sands Hotel &Casino, the beautiful classic cars cruising down the strip, and Frank Sinatra singing in the background and you are instantly absorbed into the world.

Since Timeless plays with historical events, let’s look at the history in this episode.  In Vegas in 1962, the US was ten years into testing atomic bombs out in the desert, and Vegas took full advantage of its attraction to tourists.  For the twelve years of testing (1952-1964), Vegas proclaimed itself “Atomic City”.  This should not to be confused with Atomic City, Idaho, which currently boosts a population of twenty-nine people brave enough to live in the city thirty years after a nuclear meltdown.

Flynn decides to use his knowledge of history to blackmail Judith into helping him obtain a nuclear bomb.  He chose Judith based on her infamy as a mistress to both then-Senator John F. Kennedy and Chicago crime boss Sam Giancana – and honestly between the two of them she had to know a lot of secrets.  This obviously includes the location of an unguarded nuclear weapon dubbed Christie Pitt.

This week was the week of character twists.  Before our trio leaves for Vegas, Connor pulled Rufus to the side, questioning about why Flynn chose to take Anthony when he stole the time machine.  Later, at the bar in the Sands, Rufus sees Anthony and goes to rescue him – only to find out he doesn’t want rescuing.  Rufus discovers that Anthony is not a prisoner, but a partner to whatever the long game is that Flynn is working on.

After that, Judith was rescued by the trio against her will, and is willing to help them find Flynn, only to double cross the team and brain Wyatt with a phone in order to get back to Flynn.  Later, she will regret helping him, not knowing that Flynn wanted the bomb.  Her only motivation was to protect her own reputation – not those of her lovers – because that is all she had. 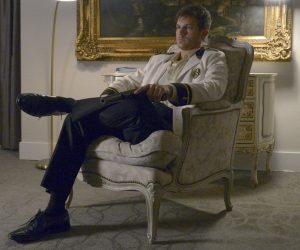 About halfway into the episode, Timeless decided that it would rip our hearts out just a bit.  Wyatt, the soldier, has always been focused on the main objective of the mission to take out Flynn.  The backstory of his wife had not been fleshed out much until this week, when we learned that she was killed after an argument that they had and she didn’t go home with him.  In a Back to the Future II move, he orders a Western Express telegram to get delivered to his wife near the day of her death to try and warn her.  Sadly, when they return he learns that it didn’t work.  Matt Lanter does an amazing job with this, and you can see how the death still hurts all these years later.  Wyatt is starting to tailspin as he is still not able to get his man and complete his objective after three missions, and it’s not going to look pretty when he finally hits rock bottom.

Now, personally I’m still really struggling to connect with Lucy.  Abigail Spencer does an amazing job, don’t get me wrong, but the character herself just doesn’t draw me in like Rufus and now Wyatt are.  It feels to me a bit that she’s the sidekick in her own show, even though she’s the one who is leading the mission.  She is opening up more now, and the trio is starting to work together more fluidly… but for me there is still something I’m not getting from her that I want to see in a leading lady.

Oh, and don’t forget we now have an atomic bomb in the hands of the designated bad guy – or IS Flynn really the villain of Timeless?  While live-tweeting with other fans, we were talking about Flynn, Rittenhouse (who Flynn is trying to destroy), how suspicious Connor is, and the whole idea on how someone knows if they are on the right side of things.  Plus, we have to remember that these episodes aren’t just one-offs; they are all going to be connected like a big game of chess with moving pieces.  First move was the Hindenburg, next was the Assassination of Lincoln, and now getting the bomb – what is the importance of the Christie Pitt, and how is it tied back to the other two events?  Will Lucy’s sister Amy, her new fiancée Noah, and Wyatt’s wife Jessica have parts to play as pieces on the board, or are they sacrificial pawns?  Also – why can’t the team just jump back in time to before Flynn’s arrival and get the jump on him instead of arriving after him?

I’d love to hear your opinions on last night’s episode and any ideas or speculation you may have to the questions I have.  Next week, Timeless will take us to Nazi Germany in the midst of World War II where the team will run into the father of James Bond, Ian Fleming (guest star Sean Maguire)!

Watch Timeless with the East Coast showing?  Join/Follow me at @ThreeIfBySpace or @AliSkyRichards on Twitter during the show to live-tweet along so you’re not yelling at the television by yourself!  Share/Like us on Facebook, and if you want to keep up on Timeless or any of your favorite shows, hit Subscribe on the right!