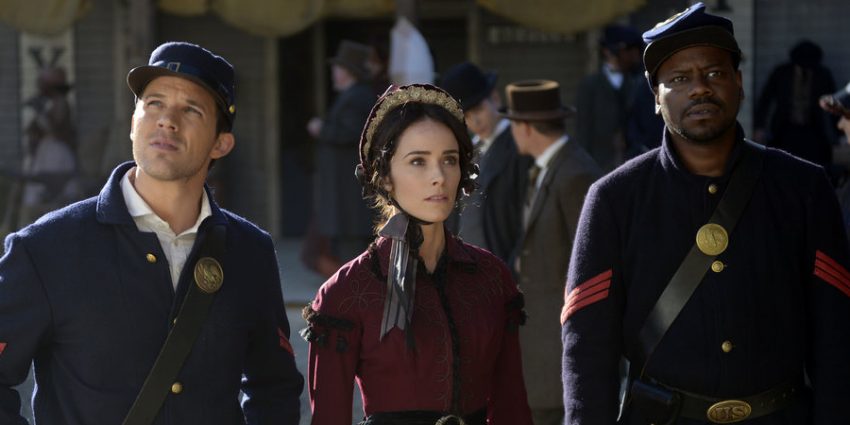 Timeless S1E2: Would You Change History for the Better?

Last night’s episode of Timeless took the main trio back to April 15, 1865 and into the Ford Theatre for one of the most infamous moments of American history.  Lucy (Abigail Spencer), Wyatt (Matt Lanter), and Rufus (Malcolm Barrett) chase terrorist Garcia Flynn (Goran Višnjic) to the night of Lincoln’s assassination, where they’re horrified to learn that Flynn’s linked up with history’s most notorious assassin, John Wilkes Booth (guest star Kelly Blatz).

This episode hit a very prominent theme for the series, which is Would You Change History for the Better?  There is a very prominent moment where Lucy, Wyatt and Rufus are talking about saving Lincoln because of how much good it would do. Ever the historian, Lucy is against it because they don’t know what it would do to their present.

“The present isn’t perfect, but it’s ours.” – Lucy

Her train of thought is clouded by the loss of her sister from the changes done in the Hindenburg disaster timeline.  Wyatt, however, takes offense at her position because it means that his wife is also meant to die while Lucy wants to save her sister.  I have a strong feeling that there will be an episode to come in which Wyatt will have to make a choice of history versus saving his wife Jessica – and then dealing with how it will affect his relationship with the team. 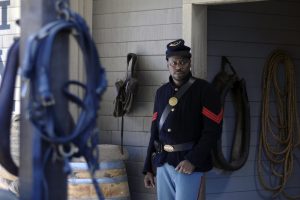 The pace of this episode was a lot slower than the Timeless pilot from last week. This allowed me to be able to really look at the characters more, and their motivations.  Right now, Rufus is still the character that impresses me the most.  He is personally affected in this when he meets a trio of colored soldiers led by Nicholas Biddle (Mike Wade).  They are happy to be free men now that the war is over and want Rufus to help write down their information. History Fact: There was an African American soldier named Nicholas Biddle during the Civil War, but he was 65 years old at the time. Rufus knows what is to come for these men in history, and after Lincoln dies he promises them that it will get better.

Wyatt is starting to show more of himself, but he still feels very closed off towards to the team.  There are hints of a gentle man, a good soldier and friend behind the façade he puts up.  He and Rufus do have a connection moment this episode though, showing his ability to form a relationship with his team, which is a step in the positive direction.

Lucy… I’m having the most trouble connecting with her, and I think it is because she is the most closed off of all.  Yes, she has her adorable moments of fan-girling over Lincoln…

… and her strength moments of doing the right thing even if she wishes she didn’t have to. I find that personally she is keeping herself at a professional distance from her job, and I think that is going to cause her problems later.  I also believe that, like Wyatt’s wife, this mysterious fiancée of hers – and her now unknown father – will become more significant to the story.

Flynn is still a mystery to me, which I don’t mind.  He’s the main villain and it’s too early to start revealing his true motivations.  The one thing that is constant though is that he has yet to kill Lucy even with her trying to stop him. There is a link between them, and I have a theory that is too early to say just yet.

I can’t end the review, though, without pointing out my favorite guest star of the evening. Neal Bledsoe appears as Robert Todd Lincoln, the first born son of Abraham Lincoln and only one to survive to adulthood.  Interestingly enough, Robert’s life was saved from a potential train platform injury shortly before his father’s assassination by John Wilkes Booth’s brother, Edwin Booth.  Neal played a southern gentleman who flirted with Lucy, and becoming the catalyst that brought Lucy into the booth with the Lincoln family at the play.  But it was his final scene with Lucy after his father’s death that stole my heart and had me crying with him.

Timeless continues to be entertaining, though the comedy from the first episode was not as saturated in the scenes.  Technically, the show is a drama so that could be a good thing to some people. I just felt it was a bit of a turn on the style that was presented at the pilot and hope that the writers find a happy medium balancing the drama and comedy within the story.