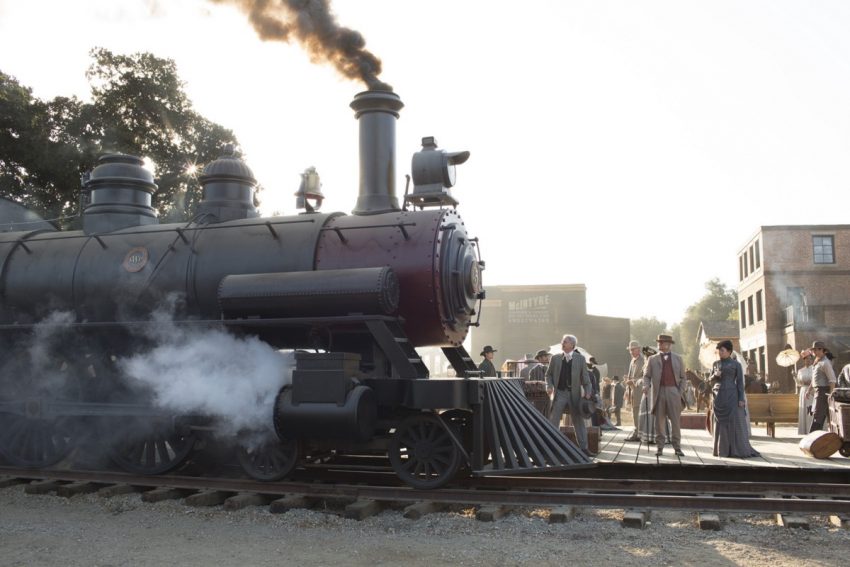 As introductions go, this one is a straight out of the park hit.  If you didn’t watch the premiere live tonight, there’s still time to catch it, because this is one show you will not want to miss.

Westworld is based off the 1973 movie, written and directed by the late Michael Crichton, and this introduction into the world of Delos and the idea of complete immersion escapades is something quite special.  As someone who loved the idea of Fantasy Island as a kid, this show is like an older, more mature and much more chilling version of that. 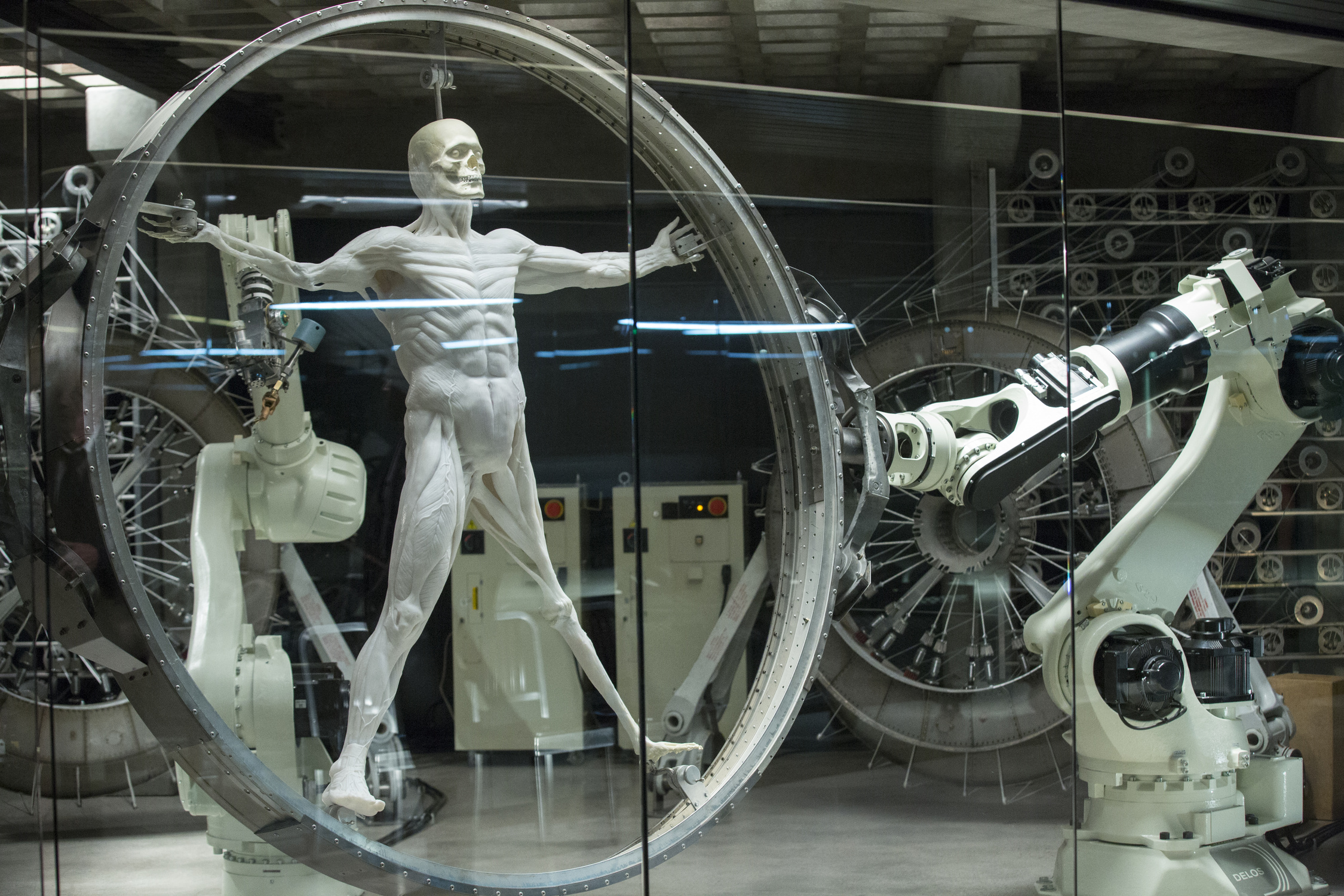 The credits are creepy, gorgeous, and yet also discomfiting, which it fitting given what we know about the show from the trailers.  The music reminds me a little of Fringe, which is fitting since this show is hitting some of the same notes that Fringe did.  The end credits made me chuckle, using Johnny Cash’s  Ain’t No Grave Gonna Hold Me Down was pretty on point for the episode, as well as the larger themes of the show, I believe.

Westworld, part of the Delos Destinations corporation, markets to the guests/newcomers a full complete immersion experience.  For a not inconsiderable amount of money, you can go in and experience any one of hundreds of plotlines and experiences here in their park. The hosts/dolls are coded to stick to certain scripts and plotlines, with minor improvisations as needed.   It’s live-action Choose Your Own Adventure, which is guaranteed to excite, shock, and please each and every guest, according to what they’re here for.

It’s fantastic.  It’s creepy.  It’s brilliant.  A theme park built around the idea of disposable humanity, where you can do things you’ve always wanted to, without any of the consequences.  As the episode points out, “This place works because the guests know the hosts aren’t real.”   The constructed hosts are specifically programmed to never be able to hurt anything, especially a guest.  Hosts can only kill other hosts if they are programmed to, specifically.   The show repeats this over and over by showing how the hosts can’t even flick a fly away if it lands on them.

The juxtaposition between what happens in the park and what happens out in what we’re to believe is the real world is masterfully done.  An inside look into what it takes to run a massively complex theme park like this and then what the actions behind the scenes look like out in the theme park itself.   We’re introduced to Ms. Cullen (Sidse Babett Knudsen) who runs Operations,  Bernard Lowe (Jeffrey Wright) who is the head technician for the hosts.    Lee Sizemore (Simon Quarterman) who is the head writer for all the different narratives, Ashley Stubbs (Luke Hemsworth)  who works in Security, and the man who started it all, Dr. Robert Ford (Sir Anthony Hopkins). 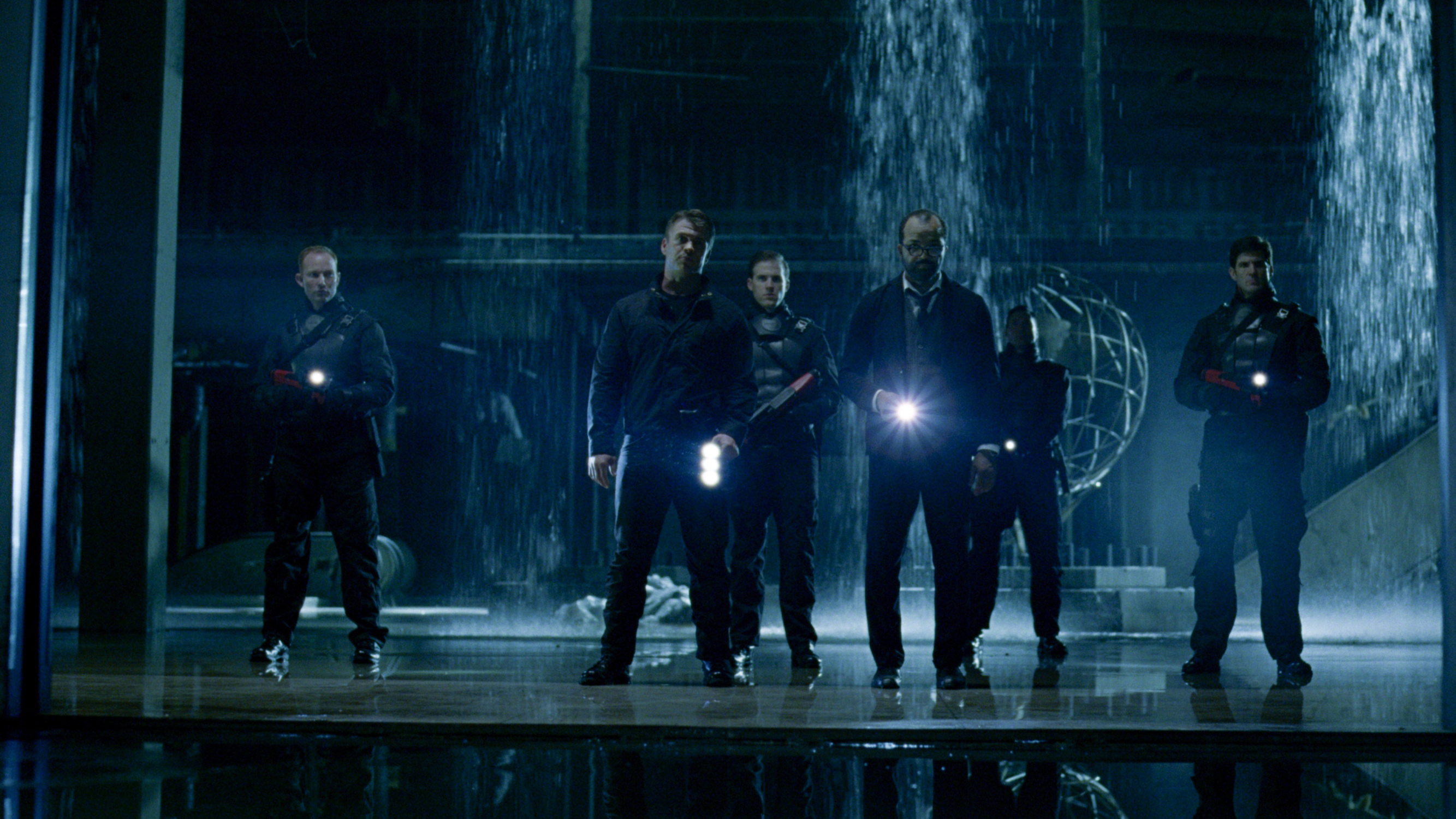 Inside of the park itself, we are introduced to Delores Abernathy, one of the hosts, as they call them. Played by Evan Rachel Wood, she’s cast as the delightful, sweet as apple pie, trademark Western sweetheart. Except still waters lie deep with this one, and despite her programming, there’s definitely more to her than might meet the eye originally.   Stubbs tells us she’s the oldest host in the park, and that it makes her special.  What he means by that, I’m sure we’ll come to see later on in the series.

Other hosts we see are Maeve (Thandie Newton) and Clementine (Angela Sarafyan), who serve as prostitutes in the local bordello/saloon.  Hector (Rodrigo Santoro)  is the main antagonist for the overarching narrative for the moment.   Teddy (James Marsden)  is the host that is paired with Delores in a kind of romantic storyline.

There are some discordant notes strung in there as well, the fact that glitches in the hosts/dolls can add up to some very interesting side-effects out in the park.  You see that with Walter (Timothy Lee DePriest) and the milk bottle killing rampage he goes on before being decommissioned out of the park.   The same is true of Delores’ father (Louis Herthum) who after discovering a picture left in the field, begins to ask “questions you’re not supposed to ask that lead to answers you’re not supposed to know.” 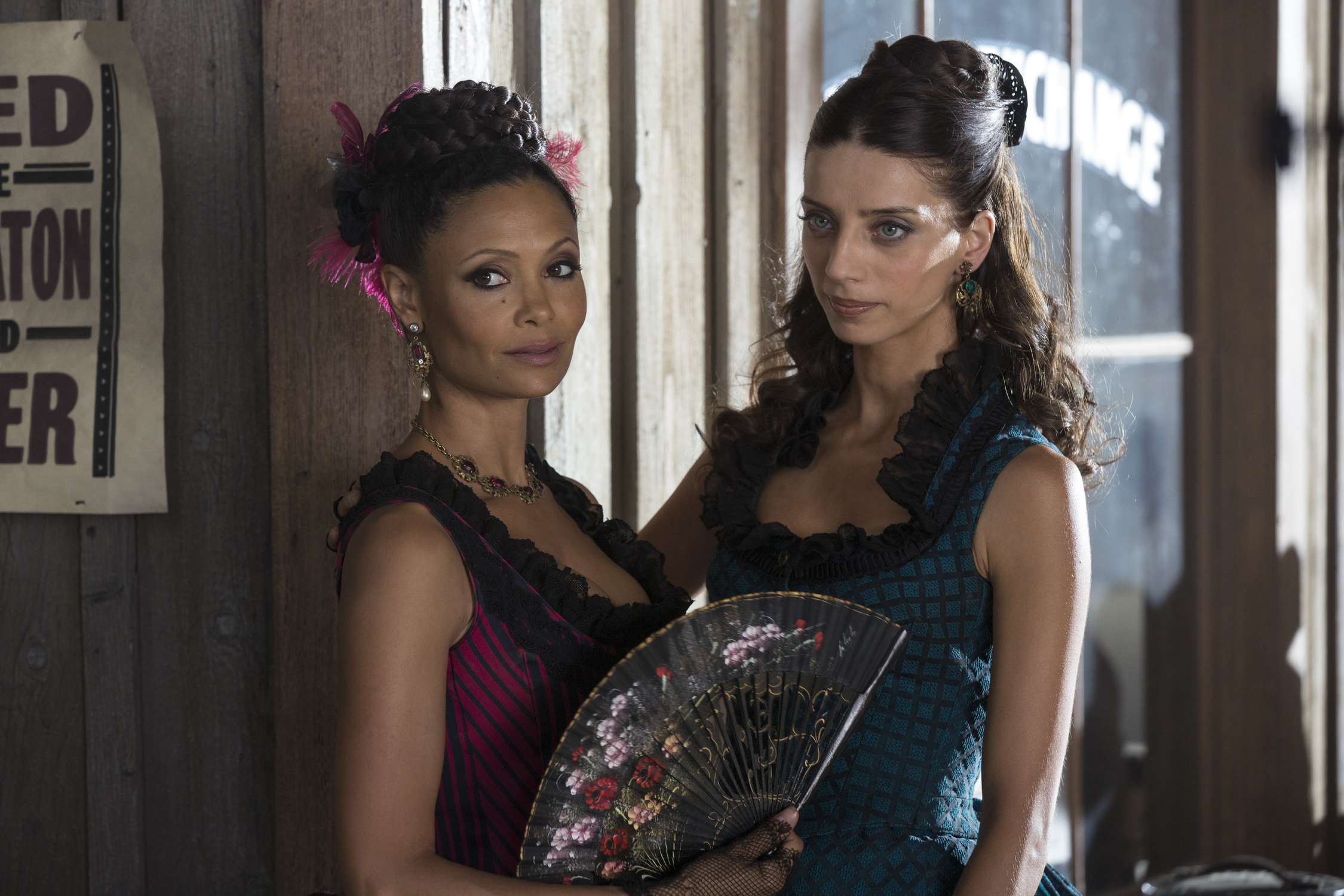 The show asks the same questions you expect of shows/media that revolve around artificial intelligence and the concepts of the uncanny valley and the ethical questions that surround the issue of what happens when artificially created life begins to take steps towards actual self-awareness.   The difference here is that they’re not serving you up a platter of plot-heavy worldbuilding that’s hard to digest all at once.  They’re lulling you into what they want you to think, how they want you to interpret the things you’re seeing.  It’s portrayed as being completely normal, which is the most chilling part of it all.

Into all of that,  walks The Man In Black (Ed Harris) who we learn has been coming here for 30 years making him more than passingly familiar with the park’s landscape.   It’s unclear whether he’s a host gone very rogue or a guest with a mysterious agenda.   He believes there’s more to this park than meets the eye, that there’s a “deeper level” to it all.   We see him scalp one of the hosts (Kissy, played by Eddie Rouse) for what might be a map on the reverse side of the skull. 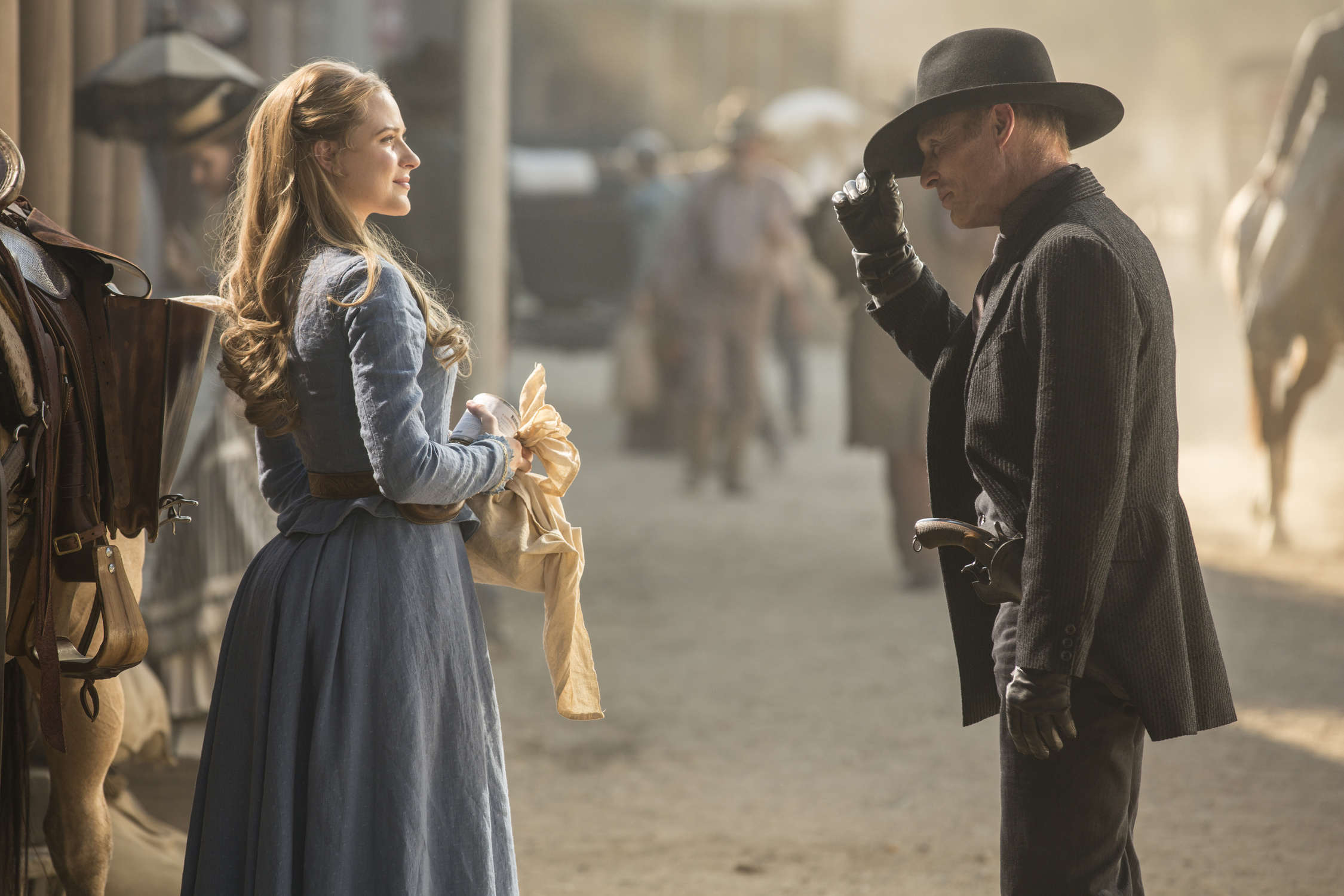 He’s one of the largest question marks so far, along with whether or not Delores is playing the long game with her creators (the killing of the fly at the end of the episode lends credence to that theory) or if she’s actually as naive as she appears.

Overall, this was an amazing hit and if you’re not currently watching it, add it to your schedule immediately.  We’ve only just begun to go down this rabbit hole and I am beyond intrigued and fascinated to see where it will lead us.  Check back here next week for more reviews and speculations on where this show is going to take us.