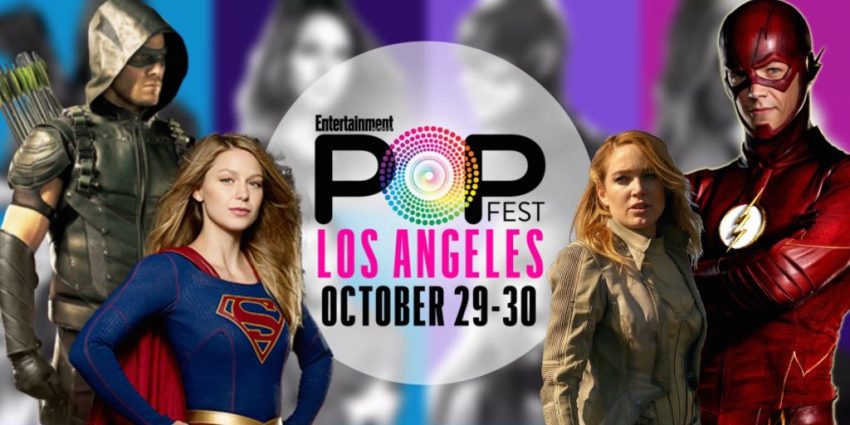 This past weekend, I had the opportunity to attend a brand new fan event, Entertainment Weekly‘s Popfest, in Los Angeles. The 2-day event, held at The Reef, an LA interior design facility, focused on everything pop – film, TV, books, and music. Overall, the event was fun, but it was obvious that it needs some rethinking in areas before planning next year’s event.

I went with a couple of friends, and for the most part, we were interested in many of the same things. We all had 2-day VIP tickets (the event sold single day, single day VIP, two-day, and two-day VIP passes). According to the info provided by EW, 2-day VIP ticket purchase got us in to see an early screening of Doctor Strange (for the first 300 to purchase); a special gift; entrance to special VIP areas, inside and outside; early entrance; “premium reserved” seating in certain events; and a dedicated bar in the VIP areas. Some of this was either not obvious – we never found an inside VIP area, and at least in the events we attended, there was no VIP seating. 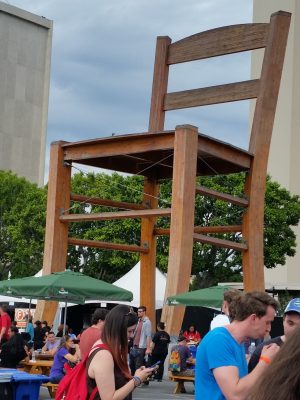 Some items were overhyped – the outdoor VIP area was available, but not much better than the general admission area (there were three small couches and a barely obvious phone charging area; the bar was no more or less busy than other bars, and actually had fewer items available to purchase). And some never happened – the “gift” was an unknown quantity to most of the EW staffers. We eventually heard that it would be mailed to ticket holders, and is likely something small, like a keychain.

The scheduled events covered a wide range of pop interests, from Gilmore Girls and Grey’s Anatomy to Jonelle Monae and Nick Jonas (who, I learned, performed 3 songs – he was given the premium final slot Saturday night). One entire venue was converted into the “Podcast Lounge,” featuring Nickelodeon, Kevin Smith, Blindspot creator Martin Gero, and many others. 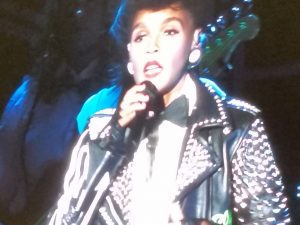 One spot was devoted to book signings – among others, Terry McMillan, Anne Rice, Amanda Peet, and of course, our favorite, Diana Gabaldon all signed copies of their books (a small area was set up to buy books). The larger theater area had bigger events – Diana spoke on Sunday before her signing, there was a panel on Oscar contenders, a comedy improv, James Corden, a table read of Happy Endings. This was the area we expected to have VIP premium seating, but never saw it. 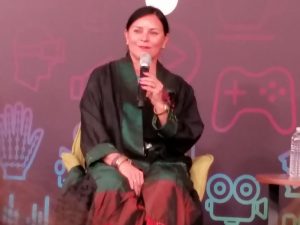 The Studio area did some screenings – we went to see a double screening of upcoming FOX shows The Mick starring Kaitlin Olson, and time-travel comedy Making History, starring Yassir Lester and Adam Pally, followed by a happy hour – drinks and mingle with the stars. The two shows were both really funny (absolutely be sure to look for The Mick in January). 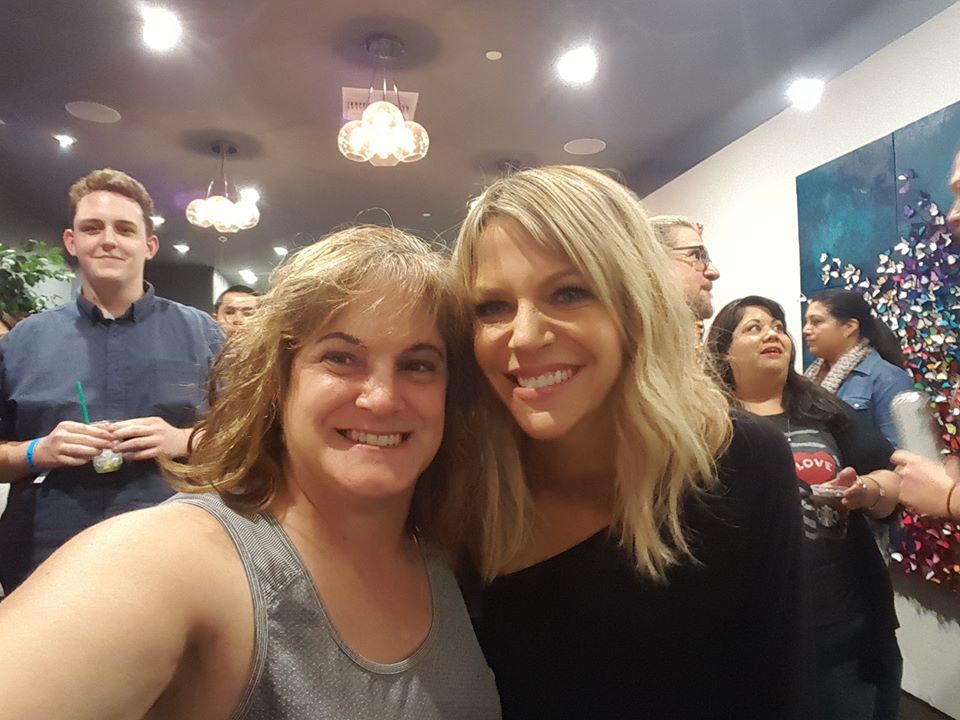 Koko with Kaitlin Olson, star of The Mick (photo by Koko Pipkin) 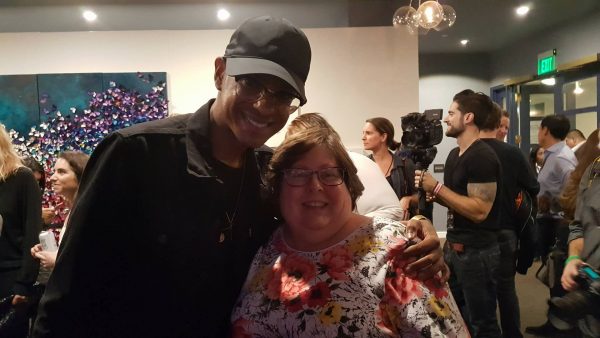 Me with Yassir Lester, star of Making History

Outside, all kinds of experiences were available. Starz offered 3-D photos for Ash Vs Evil Dead, with gifts for participants. Retailer FYE had a popup shop with Fantastic Beasts, Doctor Strange, Arrow, Marvel, Family Guy and other movie and show shirts, videos, Funko Pops, books and more. Survivor had a big double booth where you could try some of the show’s challenges – and after a panel discussion with the show’s host, Jeff Probst, and the show’s challenge designer, several former contestants came out and attempted to best some of the event-goers (including my friend Melonie!). 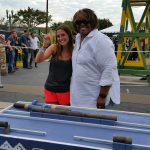 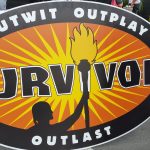 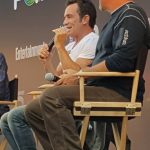 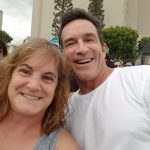 There was a lip sync battle, a “beat the trivia king” contest, and a cool-looking Fantastic Beasts 3-D experience.

Other activities at the Main Stage: Supernatural, Hailee Steinfeld, a sneak peek of Fantastic Beasts and a q & a with Eddie Redmayne – which we skipped, sadly, because it was raining; the cast of This Is Us, and a Wes Craven tribute followed by a  20th anniversary screening of Scream. 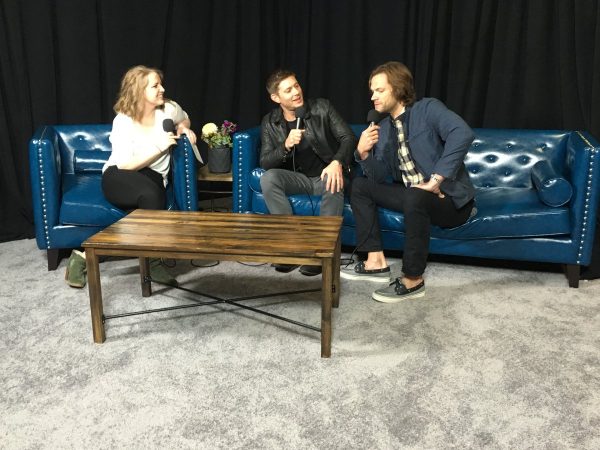 We encountered a number of irritating issues. Lack of indoor and outdoor seating, especially in the VIP areas. (In fact, the added cost of the VIP tickets gave so little benefit, with the exception of the Doctor Strange tickets, as to make them not at all worth the cost.) Lines to get into the building – fire codes restricted the number of people inside. Security announced that they’d be clearing rooms after panels and sending attendees back to the first floor, to re-line up and try to get back into a venue (although one of EW’s issues was that they didn’t sell anywhere near enough tickets, and nothing we attended was full). The “special VIP gift” thing was poorly handled – several people grumbled about this. You’d think that with the event’s big-name sponsors and the fact that this was the first of its kind, that EW would work hard to generate great buzz by offering some serious swag to VIP ticket holders; obviously, they didn’t think the same way.

We DID like the crispy M&Ms handed out by the ton. Jeff Probst is even better looking in person. Rain is unpredictable, even in southern California. I haven’t mentioned the Doctor Strange showing – I’ll do a review of the film this weekend. But that was without a doubt the highlight of the event – held at the historic and gorgeous El Capitan theater, with complimentary soda and DS popcorn buckets, and a post-film Q&A with the movie’s director (video of his chat will be with the review). A few events were cancelled – at least one author on Sunday wasn’t there, and the scheduled sneak peek of Dark Tower never happened (and it was announced today that the movie has been moved back to later in 2017, so now we understand).

My biggest issue with the event is really my own problem – I may not be the target audience that EW is looking for, since I haven’t heard of 75% of the guests and performers. I enjoyed the things I did, and my friends did too, but in general, I think the event skewed a little younger – so YMMV. But I do think that it was a great first attempt at such an ambitious festival, and I hope EW amps it up for next year!