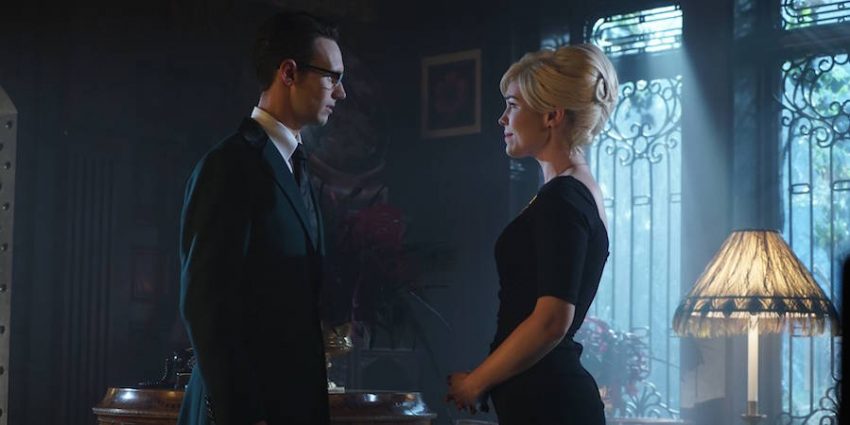 The past couple of episodes have seen a lot of developments in the relationship aspect of the show.  First Gordon and Vale get together, Bruce and Selina start dating, and Penguin falls head over heels in love with Nygma.  There’s also Mad Hatter. He had a weird obsession with his sister Alice and when she died it sent him even further down the Rabbit Hole. 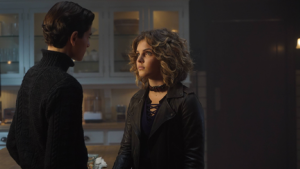 The young Bat and the young Cat have been struggling with their emotions for each other since day one.  Much like the predecessor story-lines Selina and Bruce have a chemistry that neither of them can deny.  It was nice to see Gotham tackle this dynamic, especially after two seasons of their friendship growing and confusing them.

Thanks to the Bruce double, Selina accepted the fact that she did in fact have some feelings for Bruce.  Bruce, who has known that he likes Selina for quite some time, finally decided to act on these feelings.  Selina being Selina she was hesitant and almost stood Bruce up on their first date. Bruce so craftily made the dinner himself and was very upset she almost bailed.  Their relationship won’t last, unfortunately.  Bruce is so by the book and Selina doesn’t like to be tied down, but I’m excited to see how they handle that and what causes them to break. 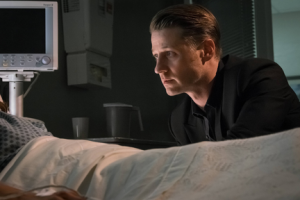 Poor Jim has had a rough few episodes.  First he was taken hostage by the Mad Hatter, alongside Lee and Vale, and made to have a Mad Tea Party.  The Mad Hatter has been hell bent on taking Jim down since Alice fell off of the balcony and impaled herself on a spike.  First, the Hatter kidnapped a child and a couple and made Jim choose between the two on who survived his little games.  Then Hatter got hold of Vale and Lee and took them to Lee’s house as captives.

During the tea party Jim was forced to choose between the two ladies. Unsurprisingly, he chose to save Lee, though he’s trying to play it off like he didn’t.  Vale was rushed to the hospital and now Jim needs to face the truth, which he’s really not good at.  Lee confronted him about his choice to which he replied that he didn’t know that’s how it would work out.  Also, because of his choice, Vale left him saying that if he still loves Lee she can’t love him.  Strangely enough, I’m pretty sure she knew perfectly well he was still hungup on Lee, but oh well.

Then there’s Barbara, Jim’s Achilles heel.  In “Red Queen” Hatter doses Jim with a psychotropic drug sending Jim on a self-revelation trip.  He imagines Barbara as his guide. This is interesting because she’s always been there, no matter how much he wants to deny it.   She shows him the truths of his heart and his mind during the trip. I’m curious what part she’ll play in the future episodes.

Penguin’s Riddles of the Heart 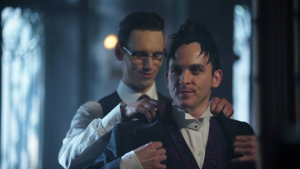 Oh my poor Penguin.  At the end of “Follow the White Rabbit” he decided to hold a fancy dinner in order to propose his love for Nygma, only to have Nygma run into Ms. Kringle, or an exact double of Ms. Kringle.  After a whole night with her Nygma has decided to proclaim his love for her, to which Penguin flips out and tries to sabotage it.  He visits Isabella at the library and tells her that Nygma killed his previous girlfriend, who bares a striking resemblance to her.  Hoping this would make her run with her tail between her legs Penguin leaves, happier than he’s been the past 24 hours.  Unfortunately, the news didn’t deter her and Nygma confessed to everything, seemingly without Isabella bringing it up in the first place.

Penguin again is found heartbroken and misunderstood.  It’s so sad to see him get so excited over something to just get let down so hard.  I think Penguin has something up his sleeve. I don’t know whether it’s going to be killing Isabella or making Nygma look completely insane again, but I know whatever it is it’ll be extremely crazy.