Do you have someone on your Gift List who is a TIMELESS fan?  If so, you have an opportunity to make their day by sprinkling a bit of their obsession inside those pretty wrapped packages.

Here’s a non-definitive guide on items out there to consider.  I’ve tried to include things in every price range, as well as making sure to focus on both the items you can find at all the main retailers, as well as special picks from Small Business merchants so you can #ShopSmall and feel good about your gift choices!

Gifts for All Price Ranges

Was “The Party at Castle Varlar” their favorite episode so far? Could it be because of the appearance of Ian Fleming?  You have a Bond fan on your hands then.  If they don’t have the Ultimate Bond Collection, you’re going to want to fix that.  They may also like the book Ian Fleming: A Personal Memoir by Robert Harding, who was a friend of Mr. Fleming starting back in World War II. 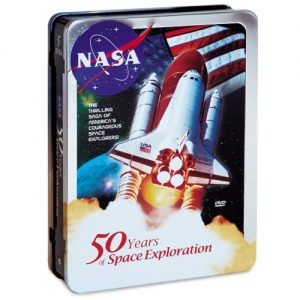 For those who were really drawn into the episode “The Alamo” and want to know more, there’s a book called The Blood of Heroes that goes into depth on the history of the battle, as well as the main characters in the conflict.  The History Channel also had a great mini-series last year, Texas Rising, that started at the Alamo and continued past to show the path to creating the Republic of Texas.

Or are they into NASA and the Space Missions?  You’ll win big points with the From the Earth to the Moon mini-series created by Tom Hanks for HBO, or the NASA: 50 Years of Exploration box set.  There’s also the photobook Earth & Space: Photographs from the Archives of NASA to show them the beauty of worlds beyond ours. 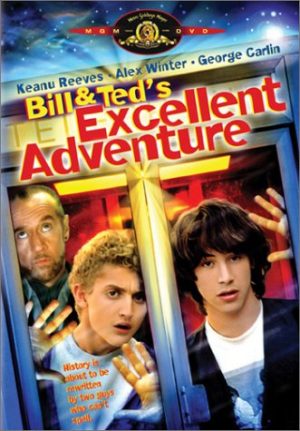 If your fan is planning a future in time traveling, they are going to need a few things.  First, there is the Time Traveler’s Guide to Time Travel which will serve as a handy reference guide to keep them from becoming their own grandparent or creating the 13th paradox.  They are then going to need to know How to Build a Time Machine, and they should know the history of time traveling before they take their first trip.  Plus, they should watch a few cautionary tales, including Bill & Ted’s Excellent Adventure, Time Cop, and who can forget the Back to the Future series?  And if you’d rather use magic instead of science, you’ll want to grab Hermione’s Time Turner instead.

There are way too many great artists on sites like Etsy that this section can become huge.  I highly suggest you go to a few places and just type in Timeless to find all the offerings. 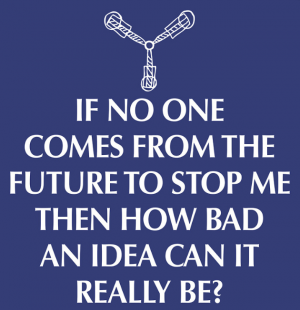 Here are just a few select ideas to get you started.

My favorite shirt from over at Woot.com is the “It Came Out of Nowhere” in which two very familiar time machines crash into each other.  On Redbubble.com, this shirt amuses me a lot.  And all wanna-be time travelers need a good coffee mug to proclaim their procrastination efforts.  Don’t forget the tea either!  I’ve found two different choices you can pick from!

There you go!  This is not a definitive list, but it’s a good starting point to get your Timeless fan on your list taken care of.  If you have any additional ideas that should be added to the list, hit me up in the comments and I will update.

Join me every Monday during the East Coast airing of Timeless on Twitter @ThreeIfBySpace as I livetweet the show.  Don’t forget to subscribe to the site to keep up on all the latest Timeless news as I hear it.

Do you have friends/sisters/wife/YOURSELF who loves Outlander, and who needs a gift for the holidays? Tired of giving the same old, sam...

END_OF_DOCUMENT_TOKEN_TO_BE_REPLACED

There's something falling from the skies, something very alien, very coveted and something that government organizations and private en...

END_OF_DOCUMENT_TOKEN_TO_BE_REPLACED

Gifts for all the Trekkies in your life - or, let's face it, gifts for yourself. Nothing wrong with that! Here are some of the more int...

END_OF_DOCUMENT_TOKEN_TO_BE_REPLACED

Outlander Holiday Gift Guide: No Bees, but Plenty of Buzz

The holidays approach. For many Outlander fans, it's time to look for fun gifts for friends, suggestions for your own gifts from a sign...

END_OF_DOCUMENT_TOKEN_TO_BE_REPLACED

Need gifts for that Outlander lover in your life? Or just need to treat yourself to something fun? Here are some fan-made and licensed ...

END_OF_DOCUMENT_TOKEN_TO_BE_REPLACED

It is no surprise that Brooklyn Nine-Nine was one of the more popular properties for San Diego Comic Con attendees this past weekend; a...

END_OF_DOCUMENT_TOKEN_TO_BE_REPLACED

NBC blew fans away last summer at San Diego Comic Con, and this year they're looking to go even bigger! NBC is bringing 3 power house s...

END_OF_DOCUMENT_TOKEN_TO_BE_REPLACED

There will be a second season of Manifest. NBC announced the news regarding its sci-fi drama Monday and that means the mystery of what ...

END_OF_DOCUMENT_TOKEN_TO_BE_REPLACED

Maybe when all is said and done, and the storylines finally come together at season's end, Dr. Saanvi will have been prophetic when she...

END_OF_DOCUMENT_TOKEN_TO_BE_REPLACED

If nothing else, episode 112 of "Manifest" gave us a fun little twist in the "Cal is missing" storyline. As suspected, Cal wasn't abduc...

END_OF_DOCUMENT_TOKEN_TO_BE_REPLACED

Well, we sort of knew this was coming, didn't we? It didn't seem like too big a stretch to think that Cal was either going to wander of...