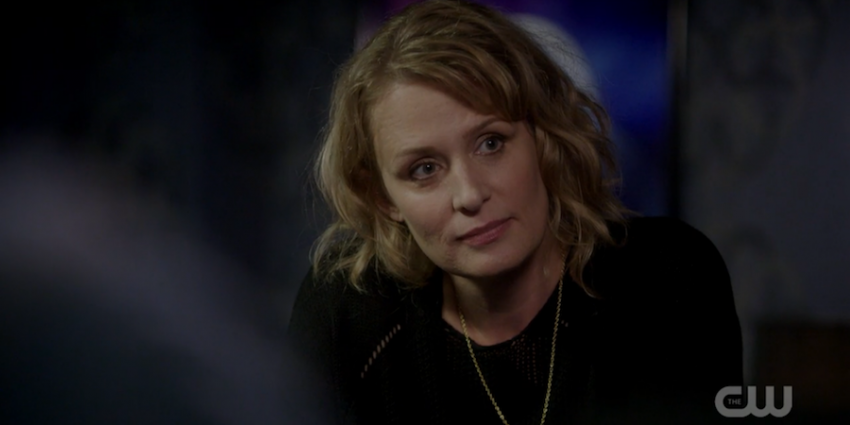 Since I missed last week’s review, I’ll have to play a little catch up this time around, starting with The Foundry. The episode picks up with Mama Winchester still working on the whole “coming back to life after being dead and in heaven for the last thirty years” thing. She’s decided work is the best medicine, so joins Sam and Dean on a hunt. After running into a few issues with technology and a little too much condescension from her boys, she ends up heading off on her own to solve the mystery behind a haunted house. Things happen, the boys realize they were wrong, rush to her rescue, save her, and all is well. Or is it?

Okay, so The Foundry was a decent episode. The best parts by far were all the subtle little nuances and intricacies that clearly indicate Dean is his mother’s son. And we thought he took after his dad. If Dean were female, he’d basically be his mom. She’s also a pretty good hunter, or at least, she used to be before she gave it up to raise a family.

After a thirty-year hiatus, she’s got a lot to catch up on. The hunting hasn’t really changed, just the method of investigation. That being said, I’m sure there are still plenty of hunters out there that prefer the old-fashioned footwork. They don’t all have the handy-dandy hacking skills of Sam. Hell, the boys have spent plenty of time investigating without the assistance of technology. For the sake of her enthusiasm and bonding, it would’ve been nice to see them show her the new ropes instead of passing her off…and ultimately shutting her down.

Since we’re on the subject, this was another disappointing aspect of The Foundry. Mary Winchester was a damn good hunter in her time. She may have been gone for thirty years, but she hasn’t forgotten how to hunt. Her instincts are still good. Granted, the boys are used to doing the job by themselves and haven’t worked with her before. They still should’ve heard her out and considered the possibility that maybe, just maybe, there was something else involved.

Ultimately, Mary was right. The deaths weren’t caused by the children. They were result of a distraught father who lost his child. Then lost his mind and bricked himself into a wall of the house. Meanwhile, the boys wasted a lot of time following their own theory, instead of listening to their mother. This led to their mother putting herself in danger to figure it out. After burning the bones and saving their mom, the boys, at least, had enough sense to give credit where credit was due. I’ll give them that much. 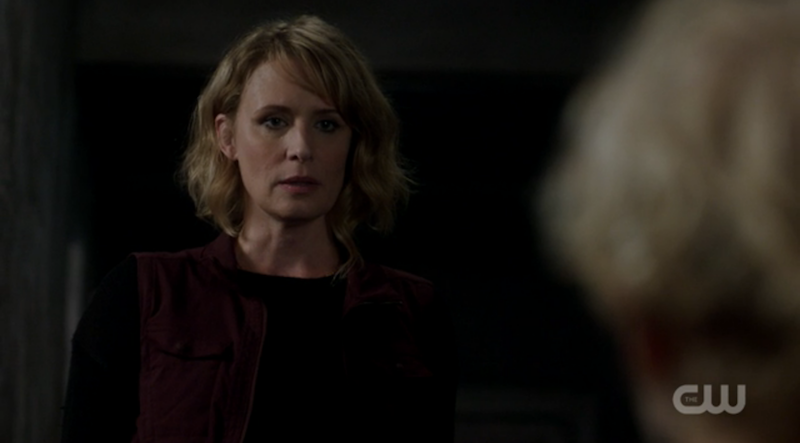 Mary Winchester (Samantha Smith) in The Foundry. Screenshot from The Foundry

This, of course, leads up to the ending where Mary Winchester has come to a stunning revelation: All this time she’s been spending with the boys has made her realize how much she’s missed with them. Logic may be screaming that this means she should probably stay with her boys and relish in the time she’s been given. She should soak up every moment she can, because she doesn’t know when it’s going to end…again. Mary, however, has fallen into that ridiculous idea where it’s too painful to know what she’s missed, so she’s leaving.

Leaving, of course, makes perfect sense, right? Not really. Perhaps she’s planning on going to find herself, get her head on straight or whatever, but really it makes little sense. It’s been a lot of fun seeing her on the show, relearning the ropes, and getting to know Sam and Dean. More importantly, seeing Sam and Dean getting to know her. Leaving now, after literally just getting her life back, didn’t seem all that logical. It was a sad move on her part…for everyone involved. And I’m not entirely sure how wise it was either.

What did you think about Mary’s decision to leave? Was it the right thing to do? Or would it have been better to stay? 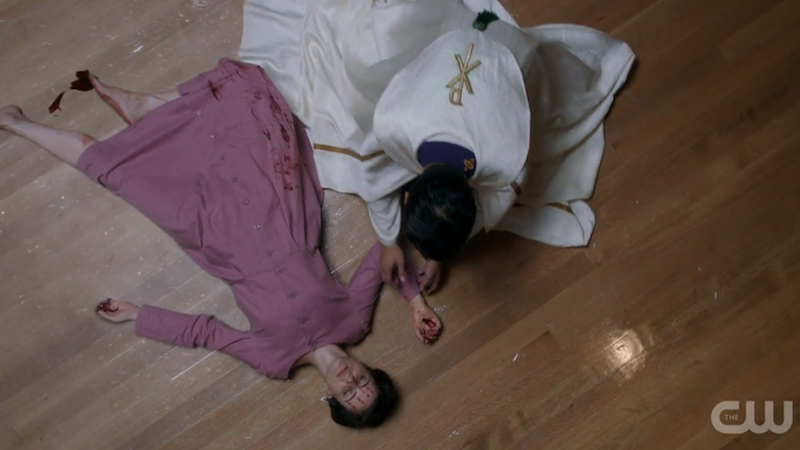 And now for American Nightmare, this was another good, plain old hunting episode without a lot of the big picture, big drama coming into play. After Mama Winchester has vacated the premises, the boys are back to hunting on their own. They follow a lead after a woman dies mysteriously with signs of stigmata and a brain of mush. This is where Sam learns that those psychics way back from seasons past are still hanging around. Doing things. With their minds.

It’s always great to see Supernatural bring back something from the past that has been seemingly forgotten. At one point, Sam had psychic abilities due to all the demon blood in his body (that was the reason, right?). After that season, however, the psychic abilities have vanished, and until American Nightmare, so had the story for the most part.

After the boys realize a ghost wasn’t behind the stigmata, Sam naturally gets caught (he’s doing a lot of that this season, isn’t he?) While in captivity, he manages to meet the fellow psychic and tells her about his past….as a psychic. Although he doesn’t have powers anymore, he did and he knows how hard it is. The religious zealot and psycho calling herself mom (the girl’s mom, not Sam’s) has convinced the girl that she’s the devil. This, of course, lent a few good moments of inside snickering. As if that girl could ever be the devil. The devil is currently inside Vincent Vincente at the bottom of the ocean somewhere!

This crazy religious mom, however, is the reason behind the girl’s attempts to get help resulting in a few cases of stigmata. When the girl attempts to seek help from the life of punishment she’s had to endure, she isn’t able to control her powers. This ultimately leads to the deaths of the very people she sought out. After murdering people, the girl is pretty convinced that her mother is right. What more proof do you need that you’re the devil than a few dead bodies? 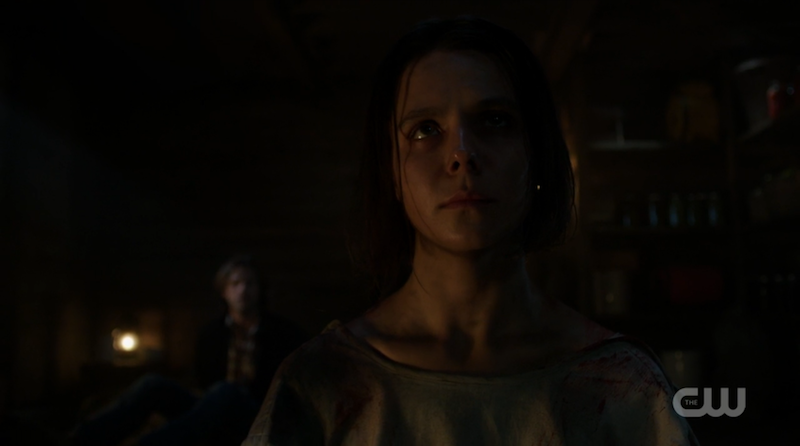 After this, it gets even crazier when the mother sits them all down to a nice family dinner…with a little poison for flavor. The mother fashions the ever original idea that they can all go to heaven together. She poisons her husband and ends up stabbing her son, but is thwarted in her attempt to kill her daughter. Even though the girl’s brother and father are wiped out by mommy dearest, the girl does manage to gain control of her powers. She refrains from killing the only person who probably deserved to die the most in this episode. Mommy dearest is arrested and the girl heads off to family in another state….until she has a fatal run in with a British Man of Letters.

American Nightmare did bring up a few interesting ideas and questions. One of which Sam introduced himself when he said he didn’t think he had his abilities anymore. While he hasn’t had them since that fated season so many years ago, is it possible that he may still have abilities? Will they come into play later on this season when they eventually have to get Lucifer back in the cage? Is their brother still in the cage?

Another question arises from the end after the British Men of Letters dispatch a man to clean up after the boys. I get that the boys have caused a lot of problems. This one, however, I don’t understand. The girl was ultimately innocent…or at least not evil. Killing her only seems to indicate that the men of letters are an evil lot with no mercy for anyone. Ever.

If I think about it, I can somewhat understand the motivation that perhaps she would lose control of her abilities and do something bad or she’s inherently evil due to the way she gained those abilities. But how are hunters and men of letters better than the devil when they kill innocent people because of what they might do? (Yes, I know she killed two people. Unintentionally, though. Did that really warrant a death sentence?)  What exactly are these British Men of Letters hoping to accomplish besides a growing list of bodies? (This also goes back to the season premiere with all the torture. I don’t see how torturing anyone is going to inspire them to see you as good people.)

The Men of Letters seem to desire to remove Sam and Dean from active duty, because, clearly, they aren’t hunting right. What do you think of the British Men of Letters? Are they efficient and good at their jobs? Or just a bit too power happy with their penchant for murder? Tell us what you thought about The Foundry and American Nightmare in the comments below!