It’s no secret that the landscape of television, cable and streaming entertainment is vast and varied. There seems to be a little something for just about anyone, be it an hour time slot or a few minutes of streamed joy. The choices for televised satisfaction can seem endless.

But within the realm of show after show after show, sometimes a little gem peeks its shine through the soil and stops you in your tracks. The Dec. 19 season finalé of TBS’ People of Earth capped off one such gem on the televised landscape. This is a quirky, thoughtful, interesting, fun comedy that pokes fun at itself through the lens of sci-fi, alien abduction and the general strangeness of humanity.

The premise is a simple one – a big-city journalist heads to a small town to do a story on a support group for people who claim they’ve been the victims of alien abduction. Known in their little circle as “experiencers,” the group meets in a church within the little town of Beacon and welcomes Ozzie, our journalist, into its midst. The transformation of our intrepid reporter begins quickly.

Ozzie, who carries a barrel-full of eye-rolling skepticism into the assignment, is gradually reeled into the group’s dynamics through what he starts to increasingly realize was his own alien encounter.

Wyatt Cenac plays journalist Ozzie Graham superbly, mixing rampant early skepticism with a burgeoning realization that the truth is out there. And with the help of his group, all of whom stray from the center line of normalcy, perhaps he can discover more.

The cast is superb and features Luka Jones, Alice Wetterland, Michael Cassidy, Tracee  Chimo, Brian Huskey, Nancy Lenehan, Da’Vine Joy Randolph, Ken Hall, Bjorn Gustafsson, Oscar Nunez and former SNLer Ana Gasteyer. While Cenac’s Ozzie is the catalyst for the show, he’s by no means the only cog in the wheel. Each character has a unique blend of vulnerability and quirky irrationality that contributes to an interesting vibe for this show. 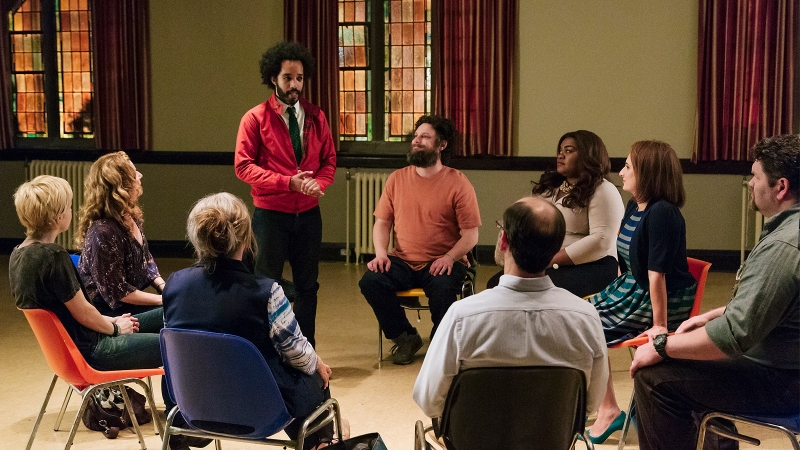 Ozzie meets with the StarCrossed group.

I kind of caught wind of People of Earth early on, but didn’t dial in right away. A long-time sci-fi fan, I like shows that offer some alien action. Once I made the leap to full viewership, I couldn’t help but be snagged by a comedy that sort of slow-plays the comedic tone. It’s there and you enjoy it, but there’s also a sad humanity attached to the people in the StarCrossed group. Most are alone in life as well as how they are viewed publicly for their alien encounter claims. And it works on a comedic level.

People of Earth doesn’t go for the obvious joke or gut-busting laugh, but offers a subtle look at people who’ve been tossed out of their normal patterns of life by abnormal circumstances via alien encounters. From late-night naughtiness with some of the ladies to a recurring theme of a talking deer (it’s a coping mechanism), People of Earth spent its first season offering quirky and subtle humor that I’ve appreciated with each episode.

The good news for those who haven’t gotten on the POE train yet is that TBS has ordered a second season.

It reminds me greatly of British comedy, which I’ve always enjoyed. You’ve not only got this group of people trying to deal with their experiences and each other in unconventional ways, but you’ve also got a trio of aliens (Greys, Whites and Reptilians) dealing with their own inter-spaceship issues as well as doing research and preparing Earth for its eventual takeover.

Watch Season One online at the TBS People of Earth website