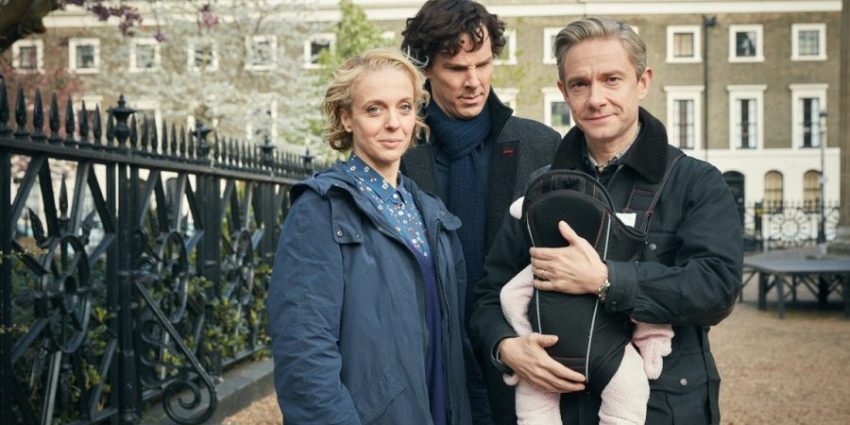 Sherlock Returns with Season 4 This January!

In just a few short weeks our beloved detective and his best friend will return to TV screens around the world after that typically lengthy “how the hell do we last this long between seasons” hiatus. Sherlock will return to MASTERPIECE on PBS as well as the BBC with three new episodes in 2017, beginning with “The Six Thatchers” on January 1, 2017, and ending with the finale “The Final Problem” on January 15, 2017.

If that’s not enough for you Sherlock addicts, you’ll also be able to see the finale in select theaters on January 16th or January 18th! Just head over to Fathom Events website for more information and to purchase your tickets!

When we last left the crime fighting duo, Moriarty (or someone acting in his name) had just released a video asking only, “Miss me?” Now, as John and Mary welcome a new little bundle of joy into their lives, the past comes back to haunt them.

In the official synopsis below, “The Six Thatchers” hints that this past may have something to do with Mary rather than the obvious problems that have arisen throughout Sherlock’s and John’s careers. With Mary’s past as an assassin, this could have an interesting outcome. What awaits Sherlock, John, and Mary this season on Sherlock?

In “The Six Thatchers,” Sherlock waits to see where Moriarty will make his posthumous move. One mysterious case in particular baffles Scotland Yard, but Sherlock is more interested in a seemingly trivial detail. Why is someone destroying images of the late Prime Minister Margaret Thatcher? Is there a madman on the loose? Or is there a much darker purpose at work? Something with its roots deep in Mary Watson’s past…

Sherlock returns for its fourth season on January 1, 2017, at 9/8c on MASTERPIECE on PBS.