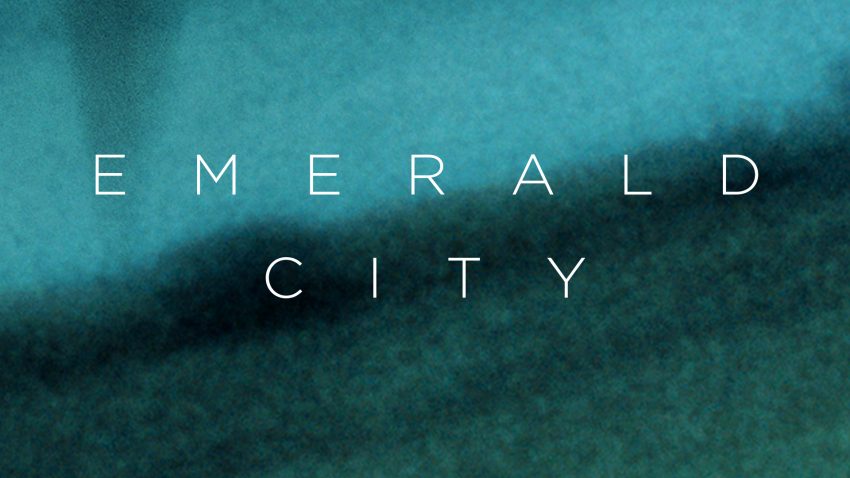 Episode 4 of Emerald City aired on January 20th.  It is called Science and Magic, the Wizard wants people to believe in science above magic, but magic keeps sneaking in there.  I believe I know which character is supposed to be the tin man now – Jack!  Another interesting revelation this week was that Anna told the Wizard that the Beast (that everyone is afraid of) has a brain, a heart, and strength.  Sure sounds like the scarecrow, the tin man and the cowardly lion to me.

The story-lines continue on mostly separate paths.  Jack and Tip have different story-lines at the moment. Tip has slipped into the witches story-line.  Anna and the Wizard continue on their path.  And of course Dorothy and Lucas are still together.

Last weeks episode ended with Jack appearing to be dead after Tip pushed him over the balcony.  This week begins with him on a crude operating table with a woman looking over him holding a saw.  It’s pretty terrifying and all very Steampunk. 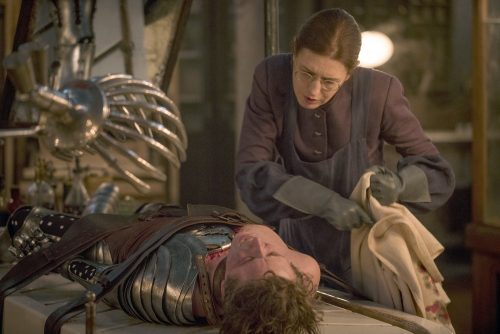 It seems that the fall did not kill Jack but he was very injured, Jane takes on the task of repairing him by giving him metal legs, a metal arm, and a gearbox for a heart.  He has to learn how to walk and how to use his metal arm and hand, once he decides he wants to try, he improves quickly and becomes quite mobile.  Looking back now at how he fell off the railing, he was definitely being a rude hormonal young man, but he might have also been thinking with his heart.  I’m going to give him the benefit of the doubt on this one.  I expect that he will become bitter about being left to die and then having his heart replaced by a gearbox after he tried to show his affection to Tip.  This will be where the tin man needs to learn about his heart again.  By the end of the episode Jack has been sold to a spoiled princess who, when she saw him, decided she wanted him.  Jane sold him to the princess, another betrayal for Jack. There is more than meets the eye about this princess too. She always wears a mask and I’m pretty sure there is something hideous under the mask that Jane “fixed”. 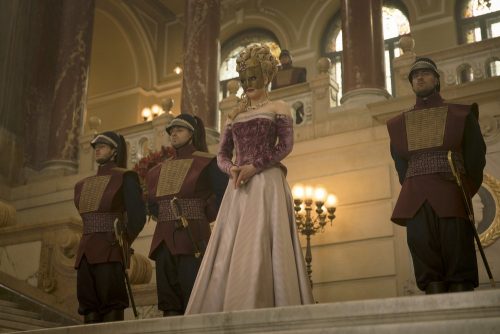 Tip has been feeling so much guilt about killing Jack and so much confusion about suddenly turning into a woman. She is feeling suicidal and is climbs up onto the railing of an icy bridge. 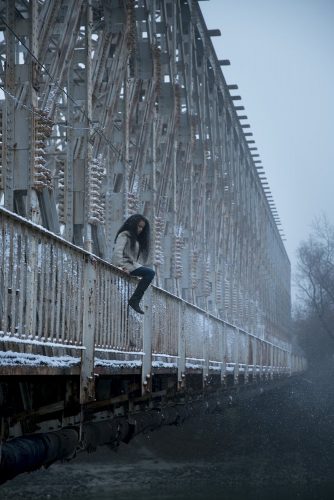 She is stopped by a soldier who has her come with him, he has a plan.  I was afraid he was going to take her to be used by the rest of the soldiers.  There is enough darkness in this show that even though it’s on NBC I still thought it was possible.  Thankfully, that did not happen.  Yet.  She is taken to an orphanage where girls are prepared to become Gilda’s maidens.  She is too spirited and contrary to follow every expectation and fights the process at every step.  Gilda appears and pulls her aside to speak with her, while she is talking, West shows up and also wants to speak with Tip.  Both witches are vying for Tip. 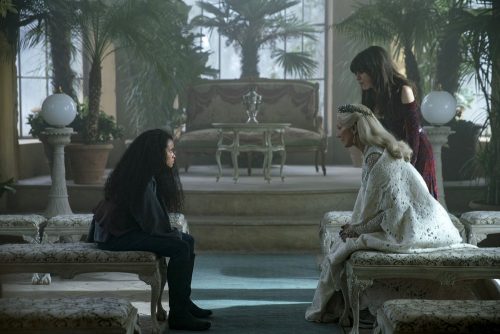 There is definitely something special about her that we haven’t seen yet. I thought so already since she was being kept hidden, but now with both witches competing for her, I know we will be seeing something interesting develop with Tip. When the witches are speaking with her, Tip comes to a discouraging conclusion, “So my choice is to become a whore or a nun?!”

The Wizard and Anna

The Wizard has come to believe that Anna is the counsel whom he trusts most, despite the fact that she is one of the newest maidens to serve as his counsel. 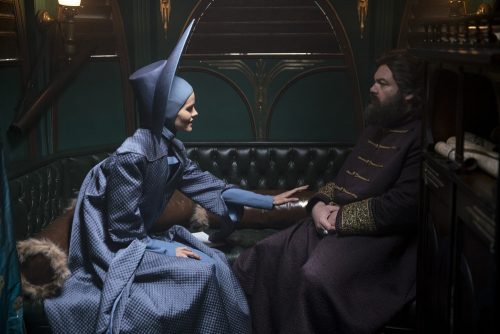 There has been a disturbance in a town called Nimbo, the Wizard decides he must go to see it and takes Anna with him.  There seems to be a magical portal in one of the homes.  The Wizard speaks with the towns people who are very upset because many of their homes where burned down by his order.  One of the town’s elders announces that “Oz is a land of enchantment, and magic is at its heart”, this of course goes against the Wizard’s need for science to be more important.   Anna uses this distraction to go into the home to look at the portal.  She reaches out to touch it and is blasted back and knocked out by the powerful energy inside that portal.  When the Wizard appears, the portal has disappeared.  He is very attentive and solicitous with her after this.  She also has that ridiculous hat off her head and while she is lying there recuperating from the blast and her beautiful blond hair is flowing around her head.  The Wizard very obviously wants more from Anna, but she reminds him that she is one of Gilda’s maidens for a reason, and it won’t change.  He still gives me an icky uncle vibe.  Before they leave, the town elder has been threatened and bullied by the guard to change his tune.  We see him at the end of the scene telling the people the very opposite of what he said earlier.  “Embrace the teachings of the Wizard – Embrace Science.”
The Wizard is supposed to be a dark and much harsher character in Emerald City compared to the wizard in The Wizard of Oz, this Wizard does not come across that way at all.  He comes across as shallow and weak.  I would expect him to exude power and strength, but it’s not there.  It makes him less believable as “the great and powerful Wizard of Oz”; I’m having a hard time understanding why and how he became so powerful, he really seems to be bumbling along.

How many romantics are out there wishing for Dorothy and Lucas to get together?  I am definitely one of them, I can’t help myself, and I’m a sucker for a romantic story. They are travelling through the woods away from East’s castle towards Emerald City, trying to stay off the brick road where they might more easily be found.  While they are talking about what they should do next, a little girl suddenly appears next to Lucas and grabs onto him.  He wants to leave her and continue on their way because they must keep moving.  Dorothy will have nothing to do with that and wants to take her back to the closest town to help her find her family.  It is a very risky thing to do since the guards are everywhere.  To Lucas’ frustration, she goes anyway.  A couple tells Dorothy that the girl is their daughter and Dorothy hands her over, but her instincts kick in and she decides to follow them and have them show her where the girl lives.  She realizes that they are not the parents and have no good reasons to keep the girl.  When Dorothy breaks in to get the girl, she finds the girl looking scared with strange eyes and the couple has been turned to stone.  This little girl has some sort of very powerful magic that seems to manifest itself when she is feeling scared or threatened.  She chose Lucas and Dorothy and they have committed to keep her safe, it will be interesting to see how this plays out. 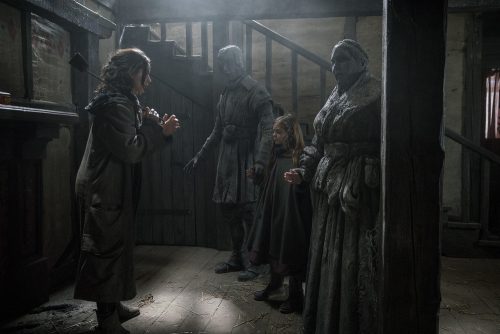 The Wizard’s guard stops Dorothy and the little girl (Sylvie) as they are running out of the town.  When the guard sees Lucas, he calls out to him, he knows who he is.  Lucas clearly wanted to find out what the guard knew, but he also knows that to stay safe and to keep Dorothy and Sylvie safe, they must leave.  Later when they have settled down for the night and Sylvie is asleep they have a really nice talk.  She apologizes that he didn’t get to find out more about himself, but he tells her that “the man I am today, is the man I want to be”.  That was an aaaaaawwwwww moment if I’ve ever seen one!  Then they are talking about the difference between science and magic.  Dorothy pulls out her ipod and earphones to show him one result of science and technology and she plays a song for Lucas, it’s another sweet moment while they listen together, and then at long last, they kiss!  Sigh. 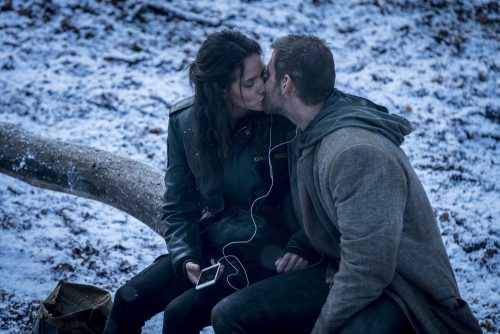