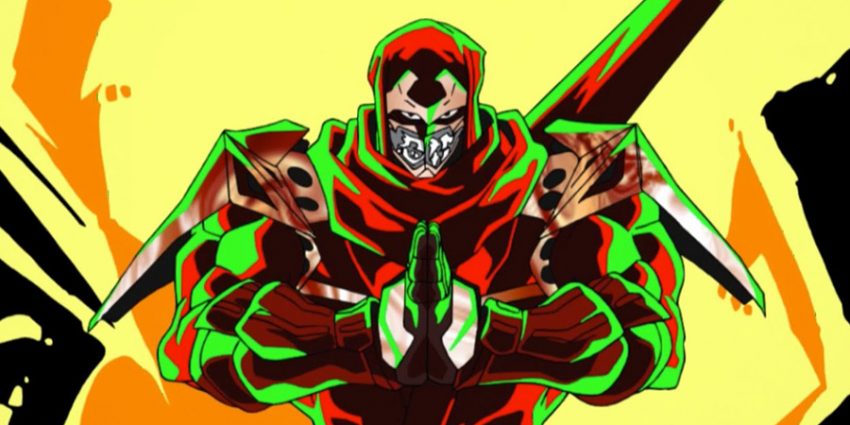 By: Paul and Caroline Daley
animation from Funimation ninja slayer

I haven’t watched much anime in a while, so I thought I’d dive in and crank out a couple reviews as a way of getting re-familiarized with the medium. It didn’t matter what the setting was (well, not school) or the subject matter (well, I prefer sci-fi). I would just randomly draw from the pool of available media and get on with it. I wound up watching Ninja Slayer From Animation (Funimation) as a result. In the future, I’ll do more research.

In a dystopian future, a ninja kills an unlucky man’s family. He wants revenge, so he teams up with an ancient ninja spirit whose goals generally align with his own. Recharged, he becomes Ninja Slayer. His mission is to kill ninjas in general, but also specifically kill ninja members of the ninja group responsible for his family’s demise. Along the way, he kills ninjas, builds alliances with a new sensei and a couple fan-servicey females, and eventually puts himself in a position to meet his goals.

I think my time away from anime has made it so I don’t get the joke. That’s what I thought as I watched Ninja Slayer anyway. Here’s why:

The Story and Animation

The Story – The story is pretty simple in comparison to most anime I’ve seen. Many plot points and events just sort of… happen, without much rhyme or reason. For example, in nearly every episode, Ninja Slayer just pops up wherever the action is. How does he know where to go? Who cares! The show’s mythology uses the idea of ninja spirits inhabiting ninjas of the world, like Ninja Slayer and his enemies. This one, single, cool idea is never really explored or fully defined. If you’re a ninja of certain stature, a ninja spirit will inhabit you, making you stronger. Occasionally, if you’re about to die, you can let the spirit take charge of your body. But that might actually be bad for you. Who knows? It changes as you progress through the show.

The Animation – I estimate half of each 15 minute episode was produced using motion graphics software. The resulting show’s stories feature an abundance of sub-South Park-style animation. Think hand drawn figures, cut out, scanned into the computer, and moved around the screen as if they were fastened to a popsicle stick. The hand-drawn animated sequences happen typically during fight scenes and then recycle over and over and over and over.. You get the idea? If Ninja Slayer needs to punch some guy once, wouldn’t it be MORE fun to see him land the EXACT SAME punch eleven or twelve times in a row? It reeks of cheapness to this reviewer.

I understand both the story and the animation may in fact be an artistic reaction to over-plotted and over-produced anime. Maybe it turns out I DO get the joke, but just don’t find it very funny. I get that something silly happening over and over can reach a level of absurdity that makes it funny. It just doesn’t reach that level here.

Maybe my grading system will need a sliding scale if this is what anime has come to. On my existing, “Was I entertained?” scale, I can’t give this any more than a D.