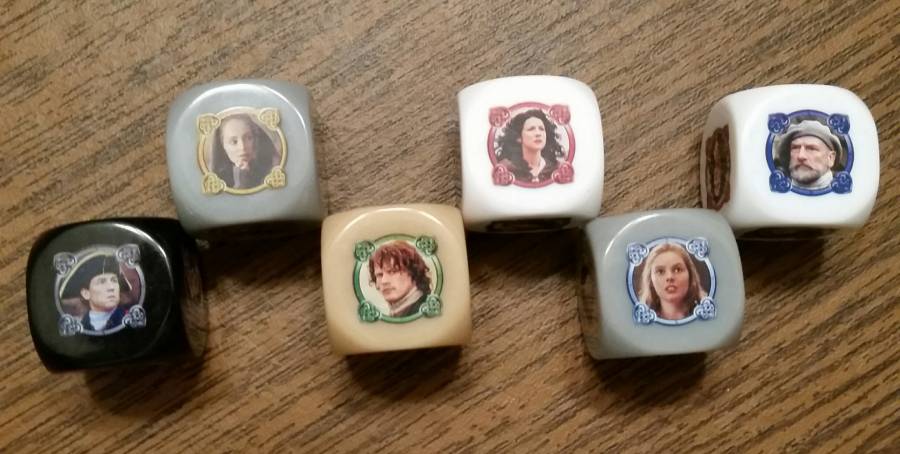 I love board games, but don’t always have a ton of patience (big surprise, I know). One of my favorite childhood memories is playing Risk with my brothers – LOTS of little pieces, lots of complicated rules. I must have been losing – both the game and my attention – and declared, as we heard in War Games, “global thermonuclear war,” and those little pieces went FLYING. I have friends who won’t play trivia games with me any more. Monopoly games (and I have maybe 6 or 7 different versions) last several days in our house. 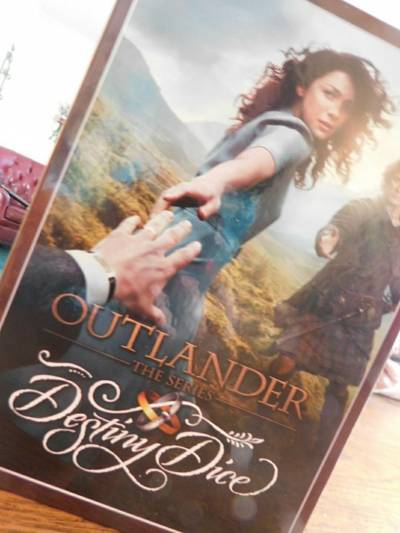 So I was excited to find out that Toy Vault (who made the cute wine charms I gave away a while ago) had created a licensed Outlander game. Two of my favorite things merged together? Had to be good. The company just sent me a copy to play and review – the game has been available on preorder for a little while, but just last week became available to ship. So I gathered a couple of my Outlander friends – Samantha, Alyson and Kelly – and, sober, serious, and dedicated, we sat down to figure out all the rules. 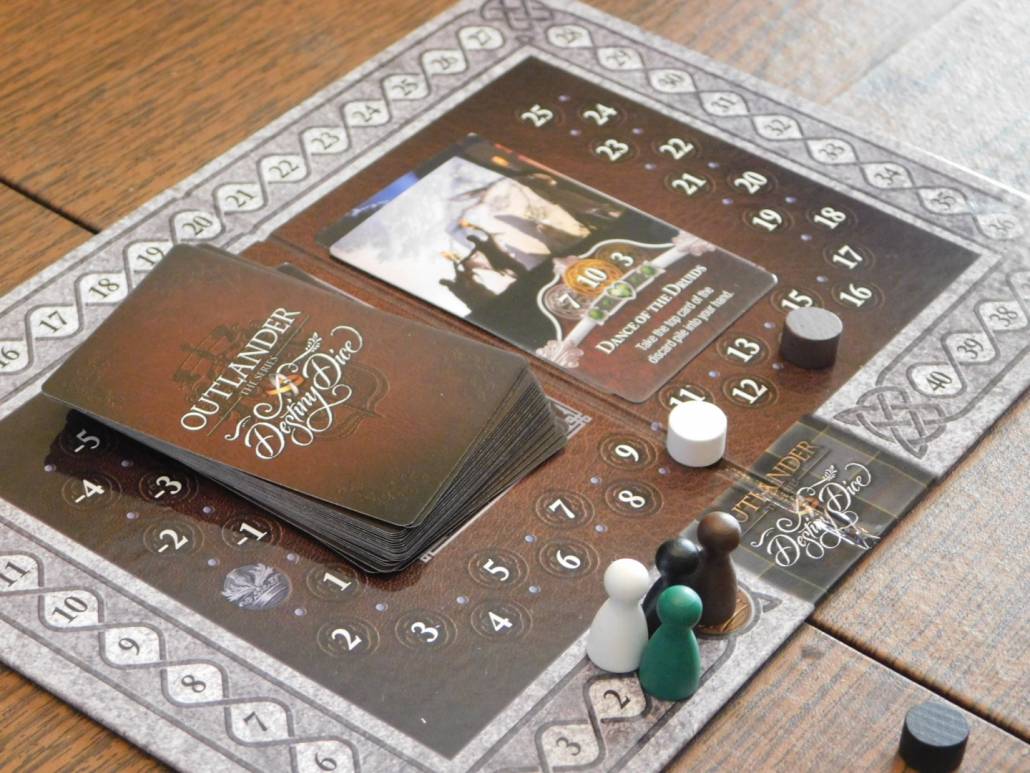 And we sat. And figured. And mathed. And interpreted. Four Claire faces were how many points? And Jenny – can she be a Dougal here? And Laoghaire does WHAT?  Maybe we should have been drinking.

The game is very pretty. Using many of the great images from Season 1, the cards are nearly as nice as the Outlander Trading Cards that I am now unfortunately addicted to. The box, with a useful magnetic clasp, is about the same size as one of Diana Gabaldon’s books, so it will fit nicely on your shelf. The 6 dice, featuring the faces of Jamie, Claire, Jenny, Murtagh, Dougal, Black Jack, Laoghaire and Geillis, are weighty and oversized (and it’s actually hard to hold all 6 dice in your hands, so we thought it would have been a good idea to include a cup in the box, but it probably wouldn’t have fit). 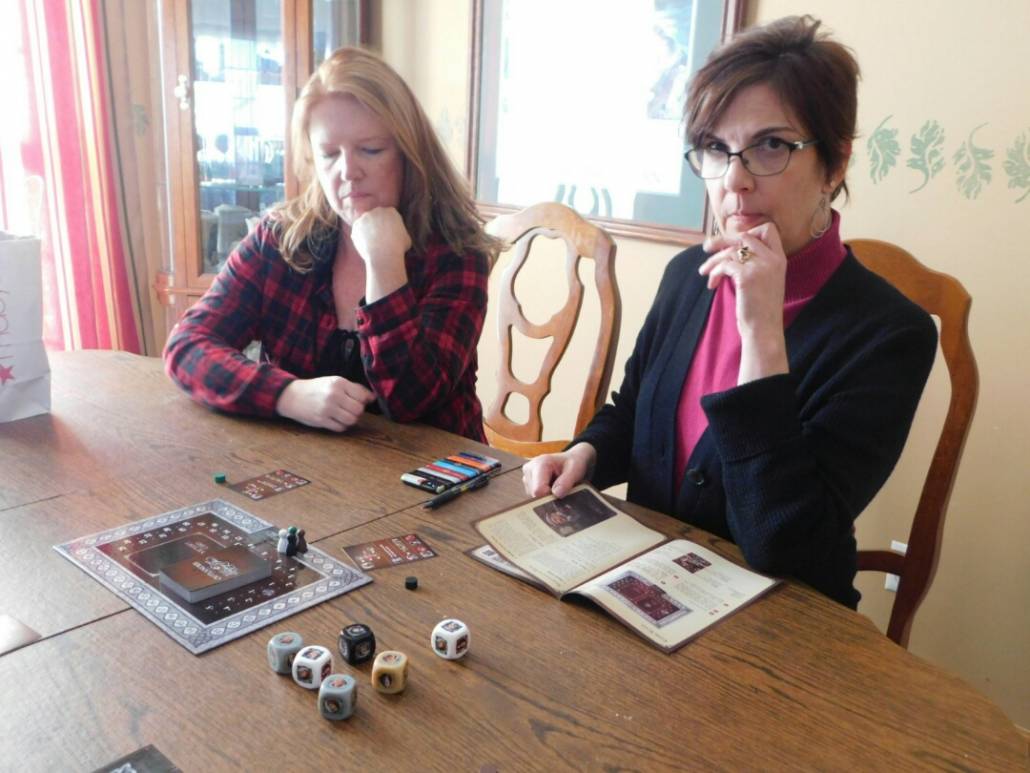 It does have several problems, though. The directions are very complicated. It would be best to give this game to a friend who is really good at figuring things out, and let them get it all clear in their head, then teach you and your co-players (for 2-4 people). That might save quite a bit of time – it took the four of us an hour to get to the point where we thought we understood what was happening. And we still didn’t get to a place where we could start to use any strategy. And we really weren’t enjoying it or having any fun yet. We played three rounds – didn’t finish the game – and it took the whole group to figure out each others’ scores. The cards come up with information not included in the directions – one card mentions a discard pile, but there’s nothing in the instructions about a discard pile (we kept putting used cards on the bottom of the draw pile). And the turns, as described in the rules, run forever, with multiple rerolls and cards used. 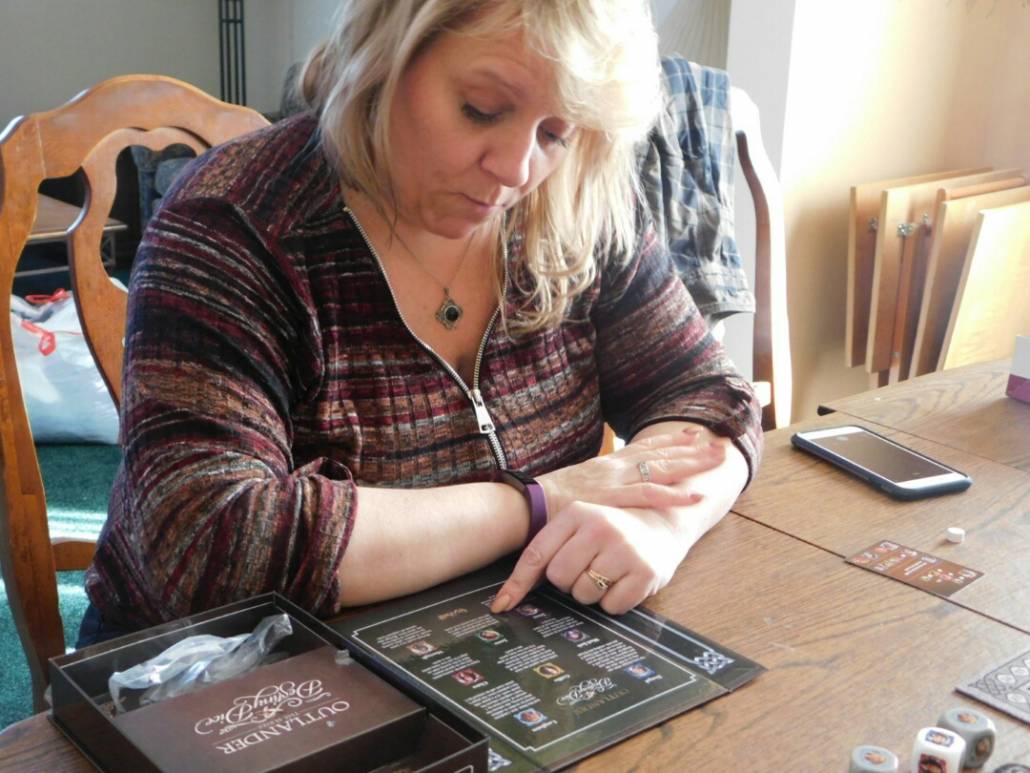 If you like new challenges, or are dedicated to the idea that learning new things helps to keep Alzheimer’s away, or just want to own all the Outlander stuff, this game may be for you. But if you have patience issues, like I do, I’ve come up with a possible solution. I think the game is worth buying – especially for you hard-core Outlander stuff collectors, and I know you’re out there.

But if you’d like to play it with friends – probably not your family, although it isn’t at all racy – I’ve come up with an alternate set of rules, designed to streamline game play while using most of the pieces and aspects of the existing game. These are not produced or endorsed by Toy Vault. You can find those alternate rules here, and I’ll add them in the “Notes” section on my Facebook page, Outlander Three If By Space. Feel free to download them once you’ve purchased the game, or are headed over to a friend’s house to play. And since these are “fan created” rules, I think you should also feel free to add your own – make it a drinking game; shout “grind my corn!” when you roll a Dougal; or merge it with Quelf or Cards Against Humanity.

Outlander: Destiny Dice is available at the official Outlander store, or on Amazon.