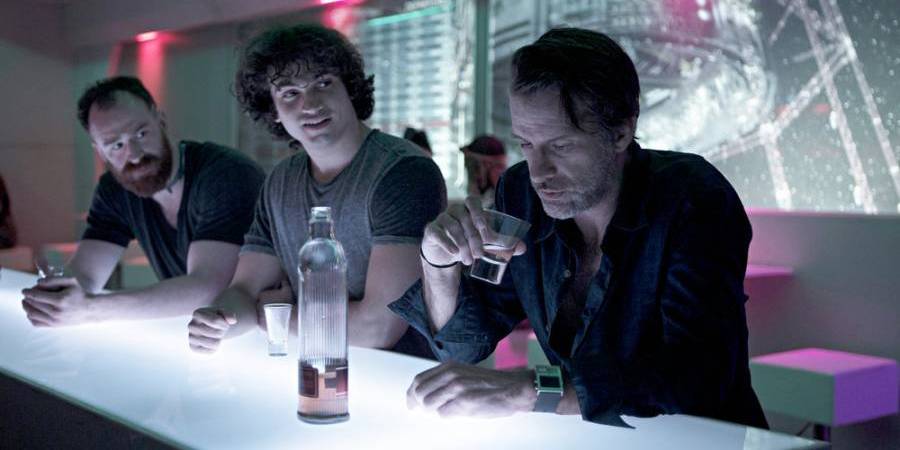 The Expanse: Episode 3 anything but ‘Static’ — Review

And you thought the nightmare of Eros was behind us. It’s certain Captain Holden and the rest of the gang on the Rocinante thought (or hoped) that what they’d witnessed would forever be left in the past. But as Wednesday’s new episode of The Expanse (“Static”) started to unwind, it became clear that the nightmare of the past would have to be part of these people’s future.

Episode 3 of season 2, “Static,” picks up with the crew back at Tycho Station after their successful assault on the research facility. The crew presented Fred Johnson with some prisoners in need of debriefing, including one of the scientists.

We open, however, with the U. N. destroying Deimos as retribution for Mars’ earlier destruction of a moon, which once again sows the seeds of war. Chrisjen Avasarala is desperate to avoid the war that her fellow U.N. cohorts seem to want so badly. You can tell she’s looking for something to change the mindset of her fellow politicians, and she hopes Fred Johnson can provide it.

It’s interesting to see how the crew of the Rocinante deal with what they’ve been through once safely on Tycho Station. Holden and Amos seem to want answers from the prisoners, Alex is dogged by the thought of the fighters lost during the assault on the station and what his part in that loss may have been, Naomi tries to put it all behind her with some sport and partying, while Miller seeks drink, solitude and then, perhaps, a new purpose moving forward. All of these various pursuits will ultimately lead them back to, you guessed it, Eros – though for different reasons. 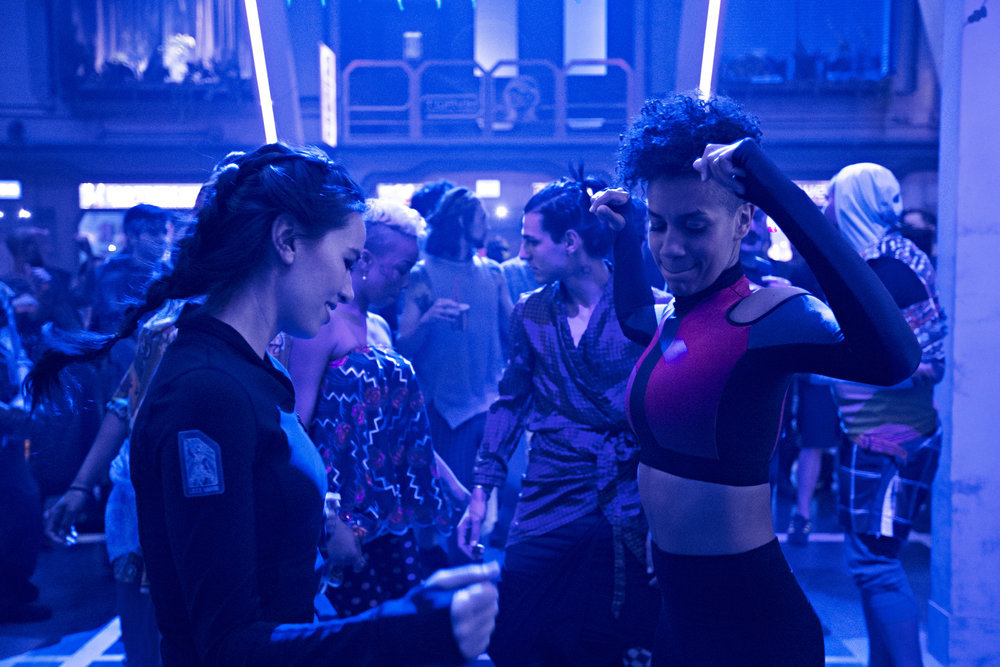 The last place they want to see again is the one place they all seemingly will need to go back to. But we’re getting ahead of ourselves a bit.

On Tycho, Holden is pissed to the point of physical violence towards Miller, who’s in cuffs because he double-tapped the head of the lead scientist on the station. That, as they say, is that for Miller’s presence on the Rocinante. The good captain feels that the loss of the one man (they think) who could have given them all the answers meant the whole trip was a waste. He makes his feelings known as he walks away.

Johnson removes the cuffs from Miller’s wrists and tells him that “dozens of ships leave here every day. Pick one and I’ll get you on it. It’s time for you to go.”

I’m a big fan of the Miller character. He has this kind of worn-down, hang-dog, the-universe-is-crap and so are people kind of vibe that mixes with an innate desire to do right when the chance arrives. There’s a little code of honor floating around inside that disheveled shell of a man, which, as we find out later, is why he put one through the head of the scientist at the station.

It’s kind of summed up in a few words he delivers to a young fighter who joined him on the assault of the station. The soldier, who’d found Miller drinking away the night at Tycho, brought him to his place to sleep and freshen up. The young man’s energy and the music he plays reverberates through the quarters and is simply too much for Miller to handle. In the ensuing conversation, he sums up life for his young protégé’. “The system rules you, Kid. It always has.”
And then he shaves his head into a bit of a mohawk, which I found to be a nice touch. 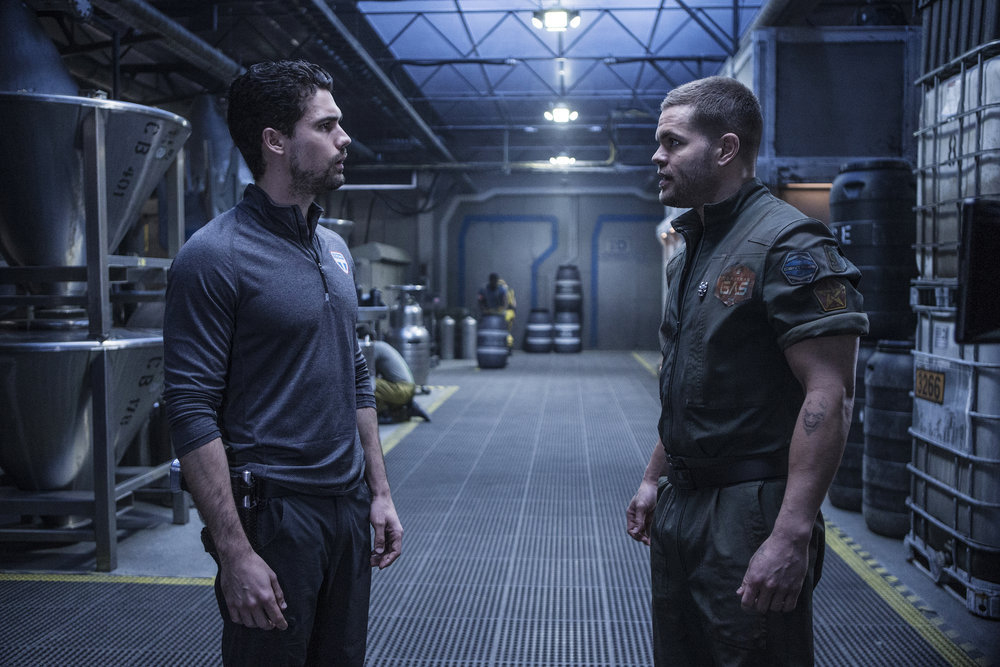 Meanwhile, in the prisoner’s cell, we find that our lone scientist was a previous employee of Protogen. In fact, all the people on the station were – before falling off the grid two years ago. Protogen is an earth-based biotech contractor which ran the facility destroyed on Phoebe.

And while that information is helpful, it seems the scientist they captured simply can’t, or won’t, talk about the work being done on the station or what the protomolecule is and what it does. However, there’s a reason he can’t relate to the pain the protomolecule is creating. The temporal lobe of not only the scientist, but the whole group, has been modified. They feel no empathy, therefore, appealing to that part of their new selves doesn’t work.

Armed with that information, Amos later sneaks back into the holding cell and tries a new tactic, asking about what he witnessed on Eros and why the protomolecule does what it does. The scientist, now faced with someone interested in the potential of the work, suddenly opens up. Turns out there was a reason Julie Mao destroyed all the lights and power sources in her hotel room – the protomolecule creates a seed crystal inside and uses energy to grow – and to develop.

On Earth, Chrisjen’s operative finally gets a secure channel to Fred Johnson. She wants to avoid a war she doesn’t think Earth can win against the Martians and is willing to commit treason to help her cause. She asks Johnson to send her anything she can use to stop the impending war. “If you have any cards left in your hand, the time to play them is now,” she tells Johnson, who admits he thinks she on the level. He is, however, reminded that he “spaced” a Black Sky Faction leader for putting out a hit on Chrisjen. If the faction learns he’s helping her, the OPA will put a hit out on him. It’s a risk he’s willing to take, it appears, and notes that he just might have something that’s helpful.

During all this Alex has created a simulation of the recent battle at the station. He lost one of the containers of fighters and the Rocinante was heavily damaged, with several of those wounds coming close to destroying the ship. Over and over he runs the simulation, never getting the result he wants for his efforts. 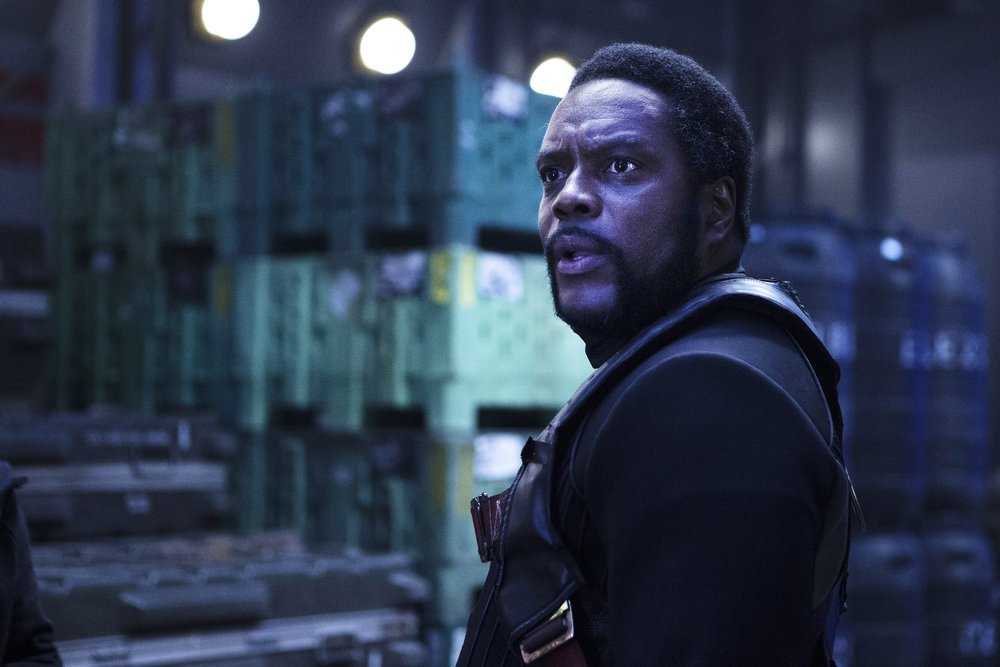 Fred Johnson during episode 203, “Static,” of The Expanse — Courtesy Rafy/Syfy.

Another character I really have enjoyed, even with limited exposure, is Martian soldier Bobbie Draper. After the destruction of Deimos, she’s ready for the war she feels is now a certainty. “The sooner we have it out with earth, the better,” she tells her superior. She chafes at the assignment they are given – securing food supplies.
There’s a lot of Martian pride and Earth hatred wrapped up in Draper and there are these little moments that remind you she’s got a high level of badassery. I’m kind of interested to see how she develops over the course of season 2.

Miller, now clean-shaven and with his new hairstyle in place, seems to realize what he needs to do – destroy Eros and the protomolecule with it. As he puts a plan in place to do just that, he seeks the aid of Johnson, who tends to agree with him. Destroying the protomolecule is essential to everyone’s safety and Miller may have found the conduit for that destruction – being created right outside Tycho.

Holden, too, realizes they will have to return to Eros. The scientist provides them with many clues about the protomolecule, including that the entity is able to learn and change. The question of whether it can be controlled is the hanging thread in the equation.

Looking at the data records of the Eros experiment, the scientist, Holden and Amos note what sounds like voices on the recording. A pulsing sound lays over the top for an eerie feel. Are there people still alive on Eros? The scientist offers a more chilling explanation – the protomolecule is building something on Eros.
The nightmare isn’t over. Holden knows they have to return and informs Naomi that he can’t do it without her.