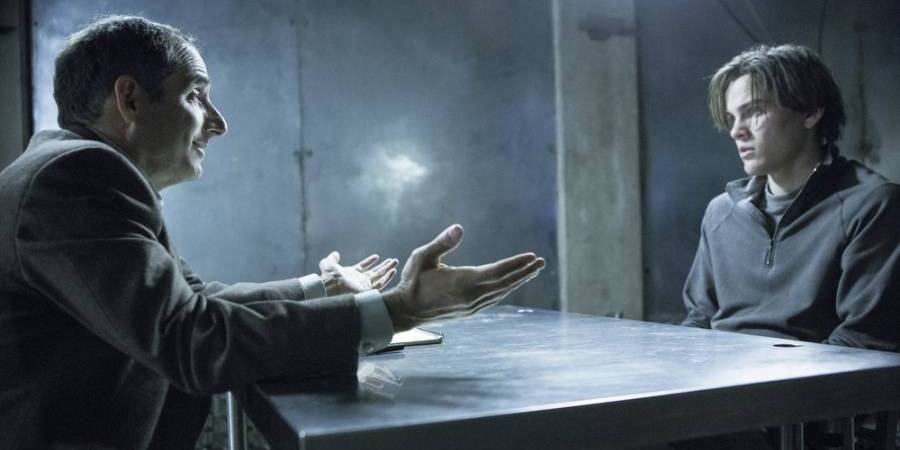 And what did the latest episode of Colony deliver to its rabid fans in episode 208? Well, we found out that while Alan Snyder is a man with a plan, Governor General Helena had the best idea in the end – run. Katie is drawn back into the resistance with the revelation that humankind’s lifespan is now about two years long; Will and Det. Burke’s “bromance” continues to move along clunkily; and Charlie’s instincts, honed in the hardscrabble life of the Santa Monica bloc, end up saving he and his sister. Creepy tutor Lindsey, however — not so much.

And that’s just the tip of the iceberg in this week’s episode, “Good Intentions.” In the aftermath of the explosion and destruction of a Rap ship above Snyder’s work facility, we see Helena and Snyder working on damage control from their respective ends. Helena looks for ways to mitigate the disaster while knowing that it may well be out of her hands. Snyder, with the help of information from Bram, commences a cover-up at the facility he hopes will keep him in the clear. In the end, a phone call Helena takes seems to be a turning point. But what? More on that later.

As a side note, I find Proxy Alcala to be an opportunistic, smarmy sort of leader who seems not to grasp just how incendiary that little explosion could be for the bloc. He’s got Greatest Day fever and pushes that storyline forward. In short, he’s already on my nerves. I’m pretty sure the Governor General agrees with me.

There are potential Red Hand extremists to catch and Det. Burke and Will, who have not played together nicely thus far, are given separate assignments to find one Emmitt Halsted, the young man Will let escape from the raided safe house earlier. So, Burke heads to the surveillance annex and Will back to the safe house to look for more clues. They hide their mutual admiration for each other’s skills so very well, don’t they?

I’ll not go into Will’s discovery at the house, except to say he met someone there he didn’t expect. And it’s someone who, we find out later, is an important Red Hand operative. Burke, on the other hand, in his usual cold and unmoving manner, tracks down Emmitt and the chase is on. He’s in a safe house and while the red hats converge, we find Broussard and Katie are looking for Emmitt, too. When the TA wins the race, snags Emmitt and drag him back to interrogation, Will is convinced the young man will give him up as saving him at the house. While this doesn’t happen initially, Will knows it’s coming soon. Torture, he knows, is a pretty good motivator. 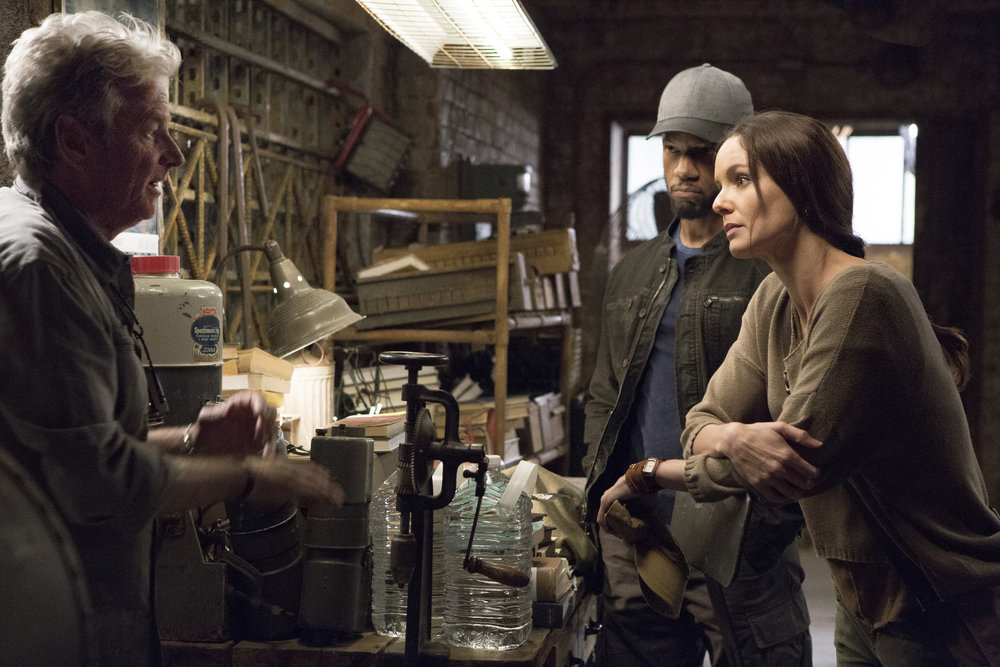 I think we all know Will hates what he’s doing and struggles with the moral issues that seem to be swirling around him. But it’s at this moment that you really sense the worm is turning for him. Can a walk on the wild side as part of the resistance be far away? He just needs to get his family back together and safe. Could it be Snyder that makes it happen? Perhaps.

But first, let’s talk about our two disgruntled resistance partners, Simon and Morgan. Simon struggles with Broussard’s increased dominance over what they are doing and, with Katie re-entering the picture, his status as third-wheel is confirmed. He sees a chance for he and Morgan to get out. The TA has his mother, they want the gauntlet and Broussard. Simon convinces Morgan that that’s exactly what they should do. It would seem that Broussard’s fate, via unseen ambush, is sealed. But as often happens in this show, there’s an unexpected twist.

Broussard returns to the lair and faces Simon wielding a gun to his face. Simon pulls the trigger and…no shots, but a bash on the head via Morgan from behind and then a knife in the gut from Broussard from the front. Morgan’s double-cross of Simon and subsequent request of Broussard to teach her about resistance fighting signal a shift in their relationship. Morgan is now fully in the fight. What is it with Broussard and his ability to recruit women to the dirty underbelly of the resistance?

You know, one of my favorite things about the show since Charlie has returned is his wonderful little gambit of annoying Lindsey as often as possible. Our Lindsey delivers that sugary-sweet Greatest Day mantra so regularly that it’s easy to ignore what might be underneath it. Charlie finds out what lurks beneath the surface when they’re in church and he is doing his level best to annoy Lindsey with the bouncing of a tennis ball. She asks him three times to stop. He doesn’t and that’s when the sweetness melts away and she unleashes the kind of sinister passive-aggressive threat that catches everyone, including Charlie, by surprise. It’s a great moment for her, a triumph of her will over his. And I hope she enjoyed it because she’s doesn’t outlast this episode, folks. 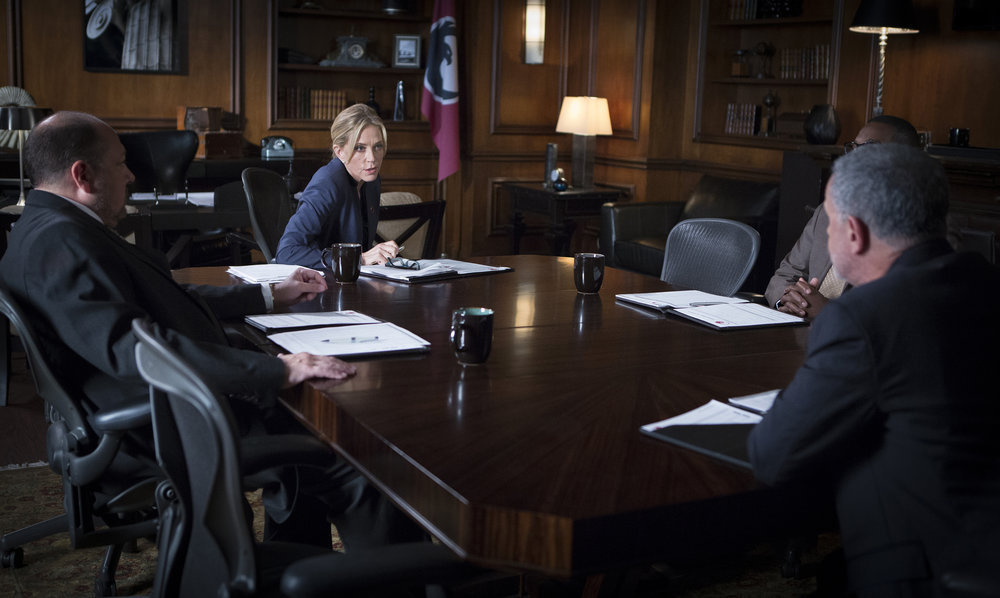 A little later, Charlie, Lindsey and Gracie are in the Bowman’s kitchen when Charlie’s “spider senses” start to tingle. He hears things, senses things, then grabs Gracie by the arm and drags her upstairs while Lindsey, clearly irritated, shouts after them – then gets gunned down in the entryway by masked gunmen. Don’t worry, Charlie and Gracie get some help from a just-arrive mom and dad and survive. But Lindsey, that was brutal. Those instincts and senses Charlie had to develop while surviving the Santa Monica bloc have not gone to waste.

As always, it’s fun to see Snyder’s mind at work. After the explosion, he’s cleaned up the evidence, enlisted Bram in the murder of fellow inmates and then goes about parading the inhabitants of the work camp, inmates and guards alike (gads, I already miss Jenkins), outside for what he thinks is an official visit from the Governor General. Now, Helena has always had a soft spot in her collaborating soul for Alan Snyder and offers it up definitively here as she comes not to inspect the camp, but to save Snyder’s life. The camp, it seems, is scheduled for destruction — like right now. Our fearless former proxy needs a little coaxing to grasp what’s about to happen, but before he jumps in his getaway SUV, he has Bram brought to the car, too. Moments later Bram, Snyder and the rest of the group are driving away when we see total destruction behind them. Snyder and Bram live to see another day. No factory, no death, and no idea what’s before them.

For Snyder, the hope is he rises from the ashes. For Bram, a family reunion in a new location. For us, the increasing recognition that this thing is getting deeper and messier for everyone involved. And that’s what makes this show so much fun. With Katie back in the resistance, and Will battling to keep Burke out of his business, it seems likely that Broussard’s group will include the big three before too long.

Join us on Facebook at Colony: The Resistance to talk about the show!