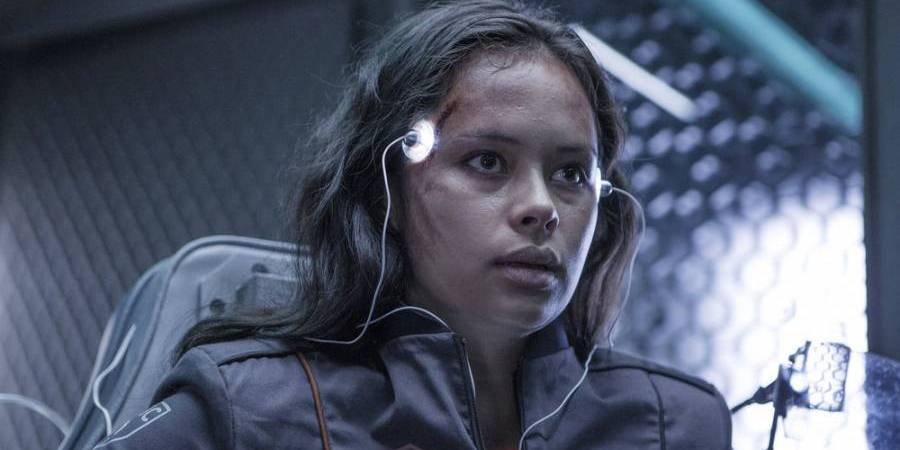 This is not how Martian solder Bobbie Draper imagined it. Episode 207 of The Expanse is called “The Seventh Man” and gives us a big dose of Draper and the journey she takes after the battle at Ganymede. She discovers that what she thinks, what people want to hear and where the truth lies has become a moving target as she recovers from battle wounds. She’s lost her soldiers, bits of her memory and, in the end, is asked to set her honor aside. It’s an interesting arc for a character I’d been hoping to get a little more invested in this season.

Remember, it’s a post-protomolecule (PMC) world (or so many believe), so the scheming, politicking and self-interest of individuals and groups are coming more into focus. And to that topic, we’re re-introduced more to Anderson Dawes. He’s a Belter’s Belter and arrives at Tycho Station to offer his support, gather information and, in the end, make a play for power just like everyone else. And that’s just a little taste of what “The Seventh Man” has to offer. This guy is very interesting on many levels. I like him already — though I don’t trust him.

But it’s Draper that this week’s episode essentially whirls around. She’s aboard the Mars military vessel Scirocco and the process of recovery is beginning. She’s agitated, groggy and just a little unsure of what she really witnessed at Ganymede, where more than 3,000 people lost their lives when a vital orbital mirror crashed into the ag domes. 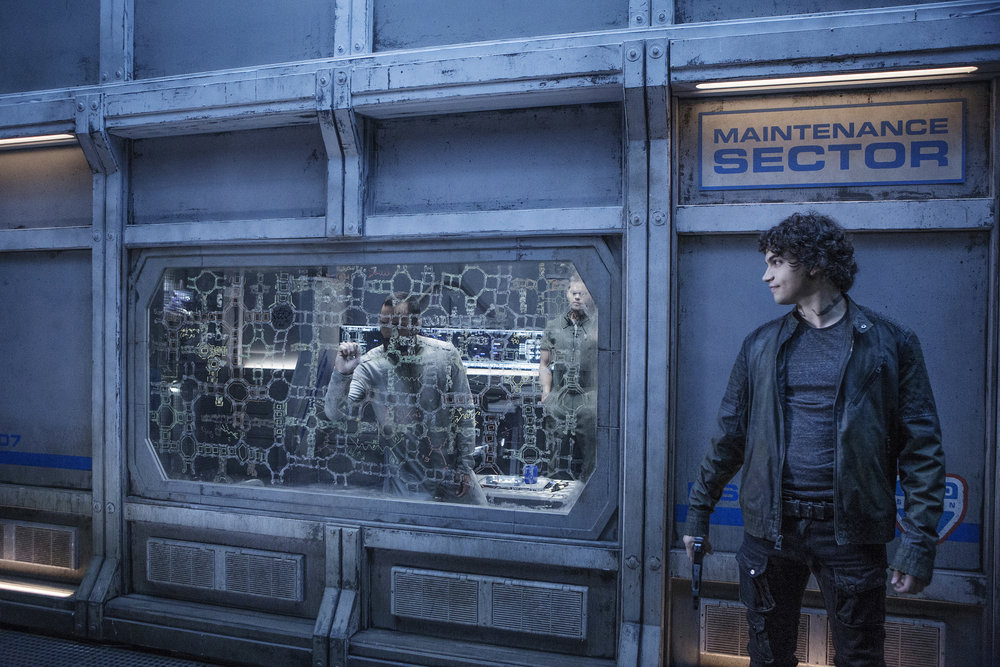 What’s interesting about Draper here is that, as she regains strength and undergoes debriefing about Ganymede, she is hit by a range of emotions. She struggles to crystalize what she saw and is coaxed along by her interviewer in her initial debriefing. Later, she finds anger and vengeance against Earth to be a comforting platform to stand on. But as time goes by, what she saw on Ganymede comes into sharper focus – six U.N. troops not running at her squad to attack them, but running from a seventh figure behind them. They were firing shots not at the Martian troops, but at what was chasing them – the seventh man. Then, she sees that odd face in her mask again on Ganymede. But her superiors don’t seem nearly as interested as they should.

To say our intrepid Martian soldier, who was so confident and full of fight earlier, is deeply shaken, would be an understatement. As I said, her foray into battle turned out quite differently than she’d imagined it. The triumph she was sure would be hers in a battle with Earth forces seems a long way away now. It’s hard not to feel for her.

While Draper is undergoing her recovery, Chrisjen Avasarala is back on Earth discussing the events at Ganymede and what the Martians might do. You can predict with a fair amount of certainty that Undersecretary Sadavir Errinwright will push a military “response” scenario — and he doesn’t disappoint. He’s a guy who wants to put the U.N. in the middle of a fight with Mars, but I also think he’s hoping a good war would help distance himself from the whole PMC fiasco and Jules-Pierre Mao.

Chrisjen pushes for a peace summit and when the arguments are over, Chrisjen’s continued insistence that Mars and Earth don’t want war, wins out. She is adamant that talking is the better course. Naturally, her political acumen and sound reason win the day. There will be peace talks between Earth and Mars. Chrisjen is such a cool customer and a savvy political operative. And I enjoy that she seems to take a “give peace a chance” road whenever the opportunity arises — and that irritates the Undersecretary. Good fun. 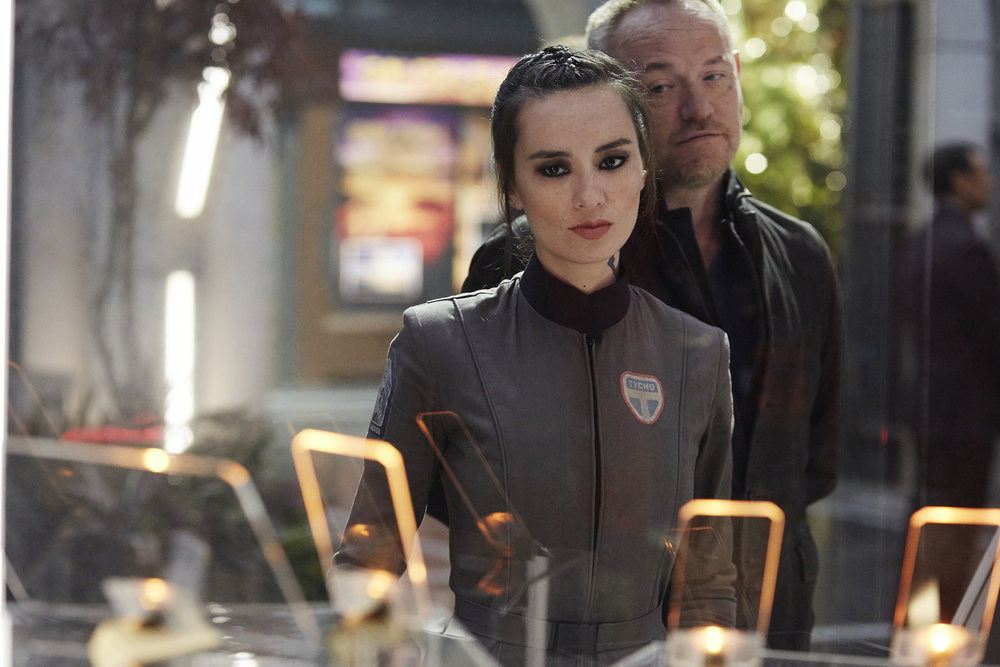 An interesting little side trip we take on Tycho Station is an encounter between Amos and a young child he frightens. The crew of the Rocinante are in the loading area providing supplies to incoming refugees from Ganymede when Amos has his encounter. It visibly shakes him and he walks away with a vacant stare in his eye. A little later he slips into the holding cell with our favorite (and only surviving) scientist attached to the PMC project. They talk about fun things like temporal lobe modifications and through their chat Amos starts to remember some of his past – his mother and his feelings for her. The scientist, while distractedly listening, continues to remind us of his obsession with all things PMC and tells Amos that “The protomolecule devours old constructs and recreates them. It only moves forward, as we must.”

Amos wonders aloud what “moving forward” might mean? Our scientist tells him that the “entire story of humanity is about to be rewritten,” and invites Amos along for the ride. Ominous words, indeed. And they become much more of a warning later when our scientist has a sudden change in residence. Amos seems to be struggling a bit after the encounter with the child.

Johnson has called representatives of the OPA factions to Tycho to tell them that he wants the Belt to have a seat at the table with Earth and Mars. He wants someone to go to Earth and suggests Dawes, which draws plenty of support. Even Holden supports the returning of missiles and the peace envoy idea. But Dawes, while offering a deferential humbleness at being tasked with being The Belt’s representative, is playing at another game. Why is Johnson playing nice now?

Dawes is an interesting study. He’s a guy who’s always probing, always calculating and dissecting scenarios in his mind, even as the words coming from his mouth are conciliatory and obliging. He wonders why Johnson would give back the missiles he stole, as well as send an envoy to Earth to talk peace. He’s convinced Johnson has a card he hasn’t played yet. 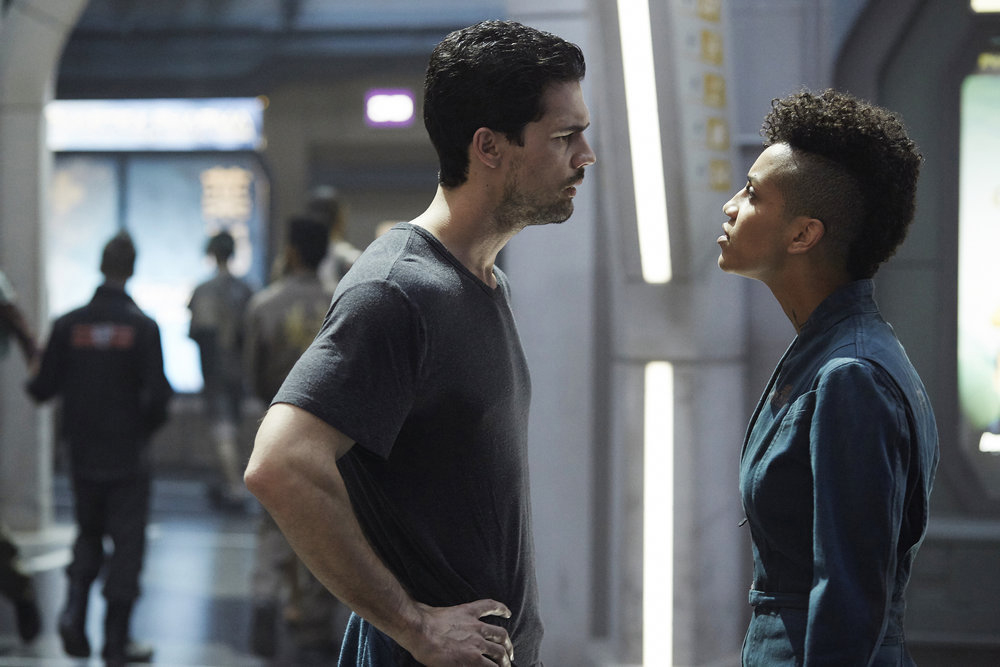 Dawes wants to find out more about what’s going on at Tycho. He probes and prods in a friendly, yet insidious way, and what information he’s able to glean fuels a move that could have far-ranging consequences. Johnson’s hole card is the scientist and the realization that there’s more PMC out there. He wants to develop it and see what its potential might be to further the Belter’s cause. Dawes starts to put pieces of the Fred Johnson puzzle together and, with the help of our young Belter soldier, Diogo, figures out what Johnson’s final card is – and acts accordingly. Our PMC scientist is now a hot property and we get a nice little spaceship chase and a fun little twist at the end. The specter of the PMC and those who’ve been involved with it keeps looming over everyone – whether they know it or not.

Back on the Scirocco, Draper is getting better and a deep-mind scan helps her reveal the events on Ganymede accurately. But that’s not going to matter anymore. While she’s awarded a purple heart for her actions at Ganymede, she’s also informed about the peace talks between Earth and Mars and told she is going to Earth to tell her story – or rather, a story that offers a better political advantage.

So, rather than a triumphant soldier standing victorious ground on a vanquished Earth, she’ll go to the enemy planet to tell a story that isn’t the full truth. It’s a bitter pill for our soldier to swallow. How that plays out, and whether she toes the political line, will be interesting to see?

So, summing up – Amos is missing, the scientist has been abducted, Johnson’s last card is gone, the PMC is still sitting out there in space, Naomi’s allegiance is in question, Holden is really worried, Bobbie Draper has been asked to lie and, oh yes, Earth and Mars are going to have a peace summit. And where is Mao? All-in-all, another fun episode of The Expanse.