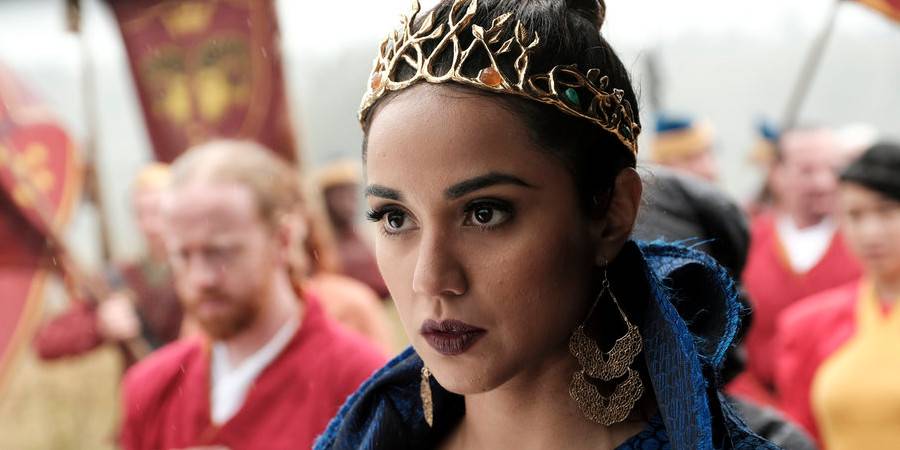 We are nine episodes into the second season of The Magicians,and the writers, producers, and the actors just keep amping the magic up to the 10th degree! Lesser Evils was the perfect title for this episode of the series, because that was exactly what we saw. Do you recall that old saying ” I will go with the lesser of two evils”?  In this episode, it was hard to tell who or what was the lesser of those evils!

I remember that earlier in the season The Beast offered to remove Julia’s shade, stating that she would be able to function better, or some such crap he was spouting. He briefly removed her shade, but she was not without it long enough for us to ascertain how she would be without it. Well, we saw that particular part of her when losing her shade was a result of her supernatural abortion of Reynard’s offspring.  I started off feeling sorry for Julia, (as I do every episode) but I always end up disliking her all over again by the end of the episode. I love the friendship that has developed between Julia and Kady though, I have loved watching it evolve. Those two have really become a force to be reckoned with. Kady knows that Julia has been through a rough time, and is willing to cut her some slack, and help her through this ‘shadeless’ time.

What I like about Kady is that she never struggles to do the right thing in the end, even if it takes her a bit to get there. She could no longer sit by, and watch a shadeless Julia cause harm to people she cares about. Kady is one of the strongest characters on the show, and for very different reasons. The icing on the cake was watching Julia willing to sacrifice Quentin in order to get her revenge on Reynard. Poor Q is already having a rough time trying to keep niffin Alice at bay, and his best friend is willing to throw him to the wolves. Well, speaking of Alice…

I’m not sure I can say poor Quentin enough, but niffin Alice would not leave him alone the whole episode. I imagine he regretted the deal he made with her, regarding taking over his body for a little bit each day, and all so he could save his friends. I was surprised when we learned that she was not only a niffin, but that he basically trapped her inside his body, a full size niffin box, if you will! Wow, talk about keeping your lover close! I would have gone stark raving mad if i were Q. You could tell that he wanted to help her, but it was really at his expense. It was taking everything he had to contain her, and he was becoming more and more weak as time went by.

I could tell he was torn about letting her go (without a real niffin box this time) but he chose to believe that she really just wanted to be free to experience the magic the universe had to offer. It was sad to hear him say “Alice, Quentin says go free”! I wonder what will happen next with Alice? I am hoping that she will find a way to come back to the land of the living, 1. because she is bad ass, and 2. because Quentin deserves to be happy.

Margo really does mean well, and has Eliot’s best interests at heart, but she really needs to stop and think before she acts. When she was planning to have a meeting with the fairies representative, I thought “Oh,Margo listen to the warnings, and please don’t piss off a fairy, they really can’t be trusted to begin with”!  What does she do, but insult one by mocking his offer of help in exchange for Eliot’s unborn child. Now, in order to get the fairies help in cleaning the Wellspring (and saving Eliot’s life in the process), she had to accept that offer. I cannot imagine Eliot will be too happy with her (and his wife) when he finds out. Margo, you’ve got some explaining to do!

ELIOT AND THE ONE OF EACH RULE

Eliot’s duel with the King from Loria was a treat from beginning to end, beginning with that musical number (which was a total gem). I have never been to a Broadway musical, but that’s what it felt like to me, and it was such a Eliot an Margo thing to do. It was such a big production, meant to get Eliot in the right frame of mind for a duel. However, I don’t think it had any effect on his opponent whatsoever. The funniest bit was when Eliot was stuck in the tree, waiting for the magic to return to his sword.

We never saw the rest of the duel, as Eliot comes back with a solution to their problem, he is going to marry the King of Loria, in exchange for half of the magic of the wellspring! Of course, Eliot is as happy as can be, as he can have “one of each” according to Fillorian law. It seems as if Eliot’s days of using his Elgolum to experience the best of both worlds are gone now that he will have a husband, and a wife. Of course, he will still use his clay self to go to back to Brakebills, I assume!

I don’t trust this Kind of Loria at all, because of the fact that he has previously won 14 duels, and all of a sudden decided to cut a deal. There is something rotten in the state of Fillory, and it is not the (former smelly) Wellspring either! Eliot is sure going to have his hands full, with a husband, a wife, and a best friend he might soon be on the outs with! I just hope he won’t let himself be taken in by this King, and being played for a fool!

The question is what will happen now? I loved the episode, and can’t wait to see what happens on the next episode! Do you think Q made the right choice, or will it come back to bite him in the ass? Did you like the musical?  Sound off below!