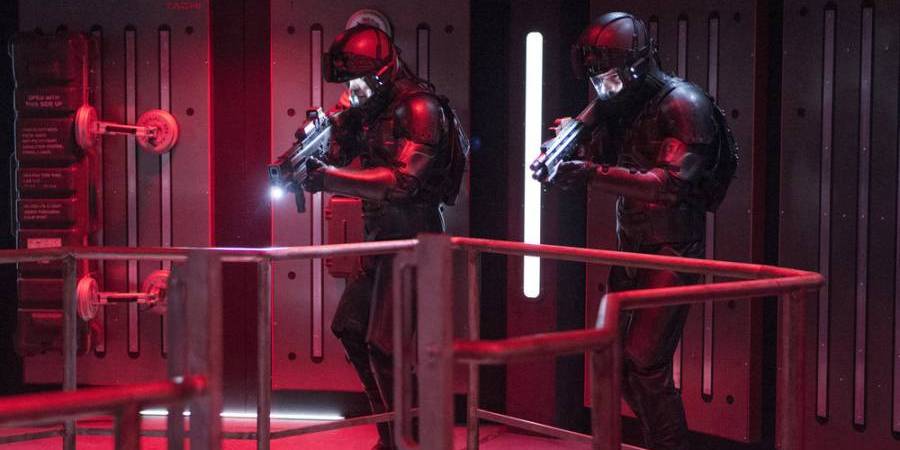 Perhaps no one summed things up better during the season two finale of “The Expanse” than Naomi at episode’s end when she declared, “The Protomolecule is part of the equation and it will be from now on. We can’t change that. We can’t wish it away. Earth has it, Mars has it, and the Belt needs it, too.” That, in a nutshell is where “Caliban’s War” takes us by the end of a tense and interesting final episode for season 2. The protomolecule (PMC) is starting to reshape things in a way that is still murky, but most definitely occurring. And how we got there was a lot of fun. Season 2 has been a turbulent ride for many of our characters, but it has been tremendously interesting along the way. I’ve enjoyed it. Hope you have, too.

Before I dial up some thoughts on the episode, I need to make it clear that the work of Steven Strait, Shohreh Aghdashloo, Dominique Tipper, Cas Anvar, Wes Chatham, Chad Coleman, Thomas Jane and fellow castmates has really elevated this show to something pretty special in the sci-fi genre. The writing was top-notch, the acting superb and the episodes, for the most part, were on-point – moving the story along to our season-ender. As I admitted early on, I came late to The Expanse, but have found it engrossing and worth not only watching, but discussing with other Expanse-ites. Is that word? Well, it is now, my friends. Now, to the season finale.

As it turns out, there’s some pretty tense action going on aboard a pair of spaceships. Cotyar, Bobbie Draper and Chrisjen Avasarala have been trapped aboard Jules-Pierre Mao’s pleasure craft when negotiations on the PMC, and Mao’s duplicity in its creation, broke down. They are pinned down by Mao’s minions behind a table – and Cotyar has been hit with a round. He even bleeds in a cool, confident, semi-irritated way. 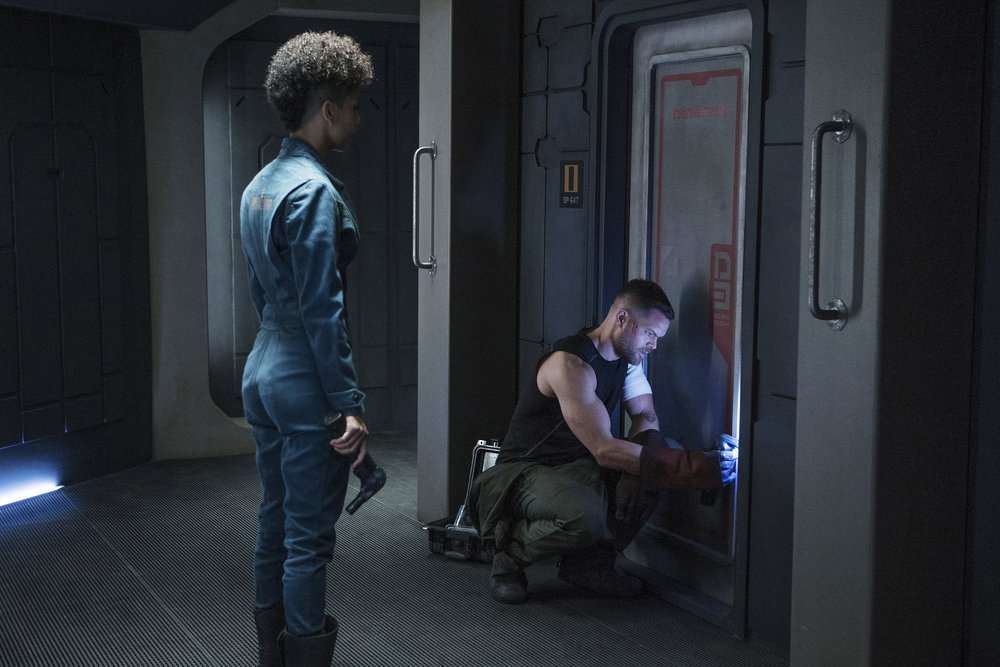 Meanwhile, aboard the Rocinante, the crew is celebrating its good fortune for not only escaping Ganymede, but rescuing the group of Belters from a planet that’s dying. Sure, Captain Holden didn’t get the kill shot he wanted on the “being” the PMC has morphed into, but everyone is safe. Things, as you might imagine, aren’t quite unicorns and rainbows aboard ship.

Naomi and Alex do some scans of the cargo bay that was hit by shrapnel during the escape of Ganymede and discover a face staring back at them. Surprise, surprise, the PMC entity used a hole in the cargo bay door to hitch a ride into space. In short, the PMC has hit the fan. Going in, I wondered if the entity would be left to Ganymede’s tender mercies and we’d reconvene there in season 3. Not so. The good writers of The Expanse have seen fit to bring “it” along for the season finale ride. Oh boy.

So, we’ve got gunfire and a hostage situation on Mao’s vessel, an unwanted and dangerous visitor on the Rocinante, and as it turns out there’s a third ship having some adventures of its own. Remember our crew that’s trying to probe whatever is happening on Venus? Well, with no probes left, they decided to try their luck at getting a little closer to the Eros crater. You can almost feel the PMC reaching out saying “Closer, that’s it. Come closer. It’s going to be fine.” Is it really? As our Venus explorers edge closer to the crater on the surface, a Martian military ship glides past them to get to the crater first – but doesn’t. I’ll leave that development to your imagination. Apparently, the PMC developing into whatever it is on Venus likes its privacy.

As noted above, there’s a hefty amount of tension on both our other ships. Fortunately, Cotyar seemed to sense that Draper was going to be an asset on this trip. And now is the time to make that happen. While Draper finds a path out that only she is nimble enough to navigate, Cotyar tells her that her power armor is in their transport vehicle. She needs to get it “and save our asses.” 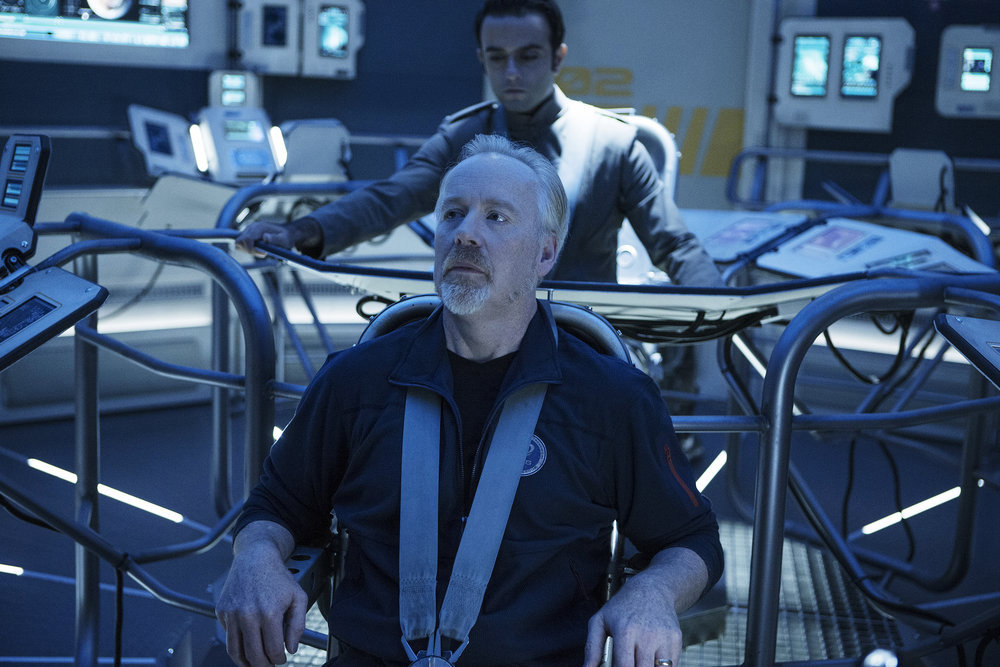 I noted before that I enjoyed the interplay between Cotyar and Bobbie in Ep. 212 and in this brief moment, while under fire, I found more to like. Draper looks at Cotyar with stunned amazement and asks him why he would even bring her suit. A moment passes between them, a look that says more than words. It’s a respect and intuition thing. Bobbie Draper is going to save their asses, and Cotyar just knew that was a possibility. So, off Bobbie goes through the air lock, dodging obstacles and taking out a couple smarmy guards along the way. Overall, good Draper stuff all the way around. Just when Chrisjen had surrendered and Mao had given the order to “clean up the mess,” Draper appears – armor on – and neutralizes the bad guys with a nice bout of butt-kicking. It was so satisfying.

But most of this episode is devoted to a face-to-face encounter between the Rocinante crew and the PMC entity that stowed away. It’s kind of fun to see Holden go into hunter mode while the more restrained tones of Dr. Meng try to break through the static. Dr. Meng wants to try and communicate with it. Holden isn’t having any of that. Time to shoot first, seek forgiveness later.

Weapons locked and loaded, Holden and Amos head down to confront the PMC in the hold and find that it’s easier said than done. When the shooting stops, Holden is trapped against the wall, Amos has been ordered out and we get a good look at just what they are dealing with. It has been fun to get teased by the PMC entity the last half of the season. We’ve seen some blurry looks at the face (through Draper’s mask on Ganymede), some distant shots of it running around, as well as infrared detection, but in this episode, we get to see the whole enchilada – the PMC as a lifeform – and it’s fairly terrifying.

Turns out, the PMC does have a need – an energy source. So, with Holden trapped and injured, and Amos gone, it turns its attention to feeding – at the expense of the Rocinante’s engine reactor. It digs into the ship’s bulkhead and starts digging toward the engine room. While the crew tries a few things to keep the PMC distracted, as well as developing a plot to eventually eject it (while killing Holden, of course) into space, it is Dr. Meng who uses his botanical knowledge to come up with a clever solution to not only lure it out of the ship, but destroy it. Using a nuclear weapon’s core, they successfully lure the PMC out of the ship’s hold into space where, clutching its newly caught source of nutrition, it is torched to cinders by the Rocinante’s engines on full burn. 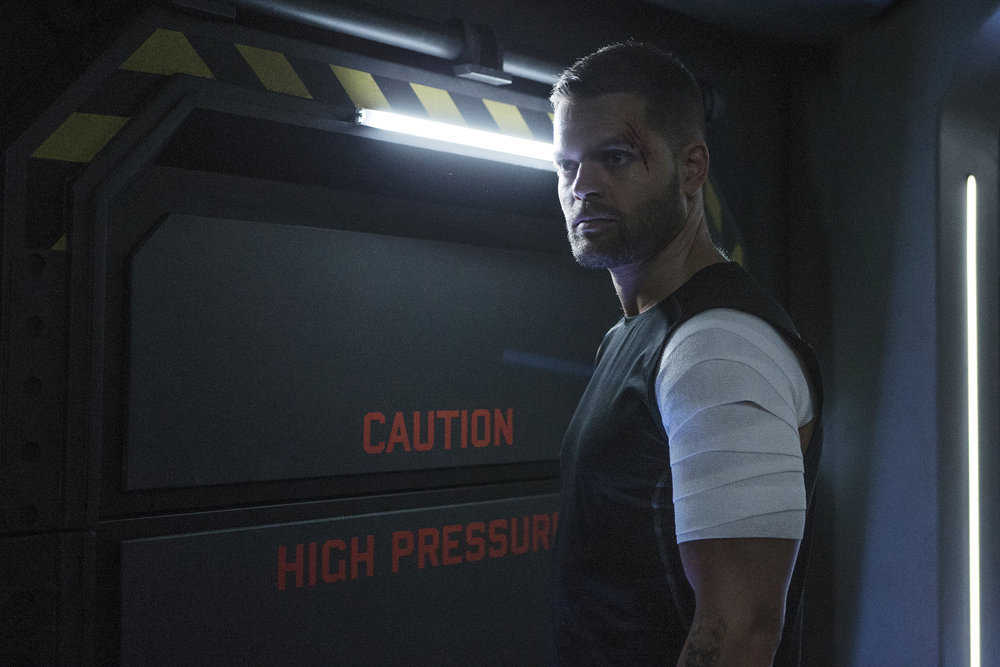 Personally, I’m delighted that Dr. Meng, who keeps hoping against hope that his daughter Mae was not the PMC entity, was the one to come up with the plan that ultimately ended in success. He’s been a voice of reason, as well as blind faith, since his introduction and I’ve appreciated him for it. Sometimes it seemed foolish, but at others moments it reflected the passionate hope any father would have. And perhaps it’s hope that Dr. Meng will have rewarded at some point. Because as we see at the end, Mae is very much alive and sleeping thanks to Dr. Strickland, who appears to be ensconced in another secret facility somewhere in the system.

Hopefully, Dr. Meng remains a crew member aboard the Rocinante. He offers an nice counterpoint to the rest of the crew and has developed a strange, somewhat clunky relationship with Amos. I like it.

We also get the scene I’ve been waiting for. Remember at the top, Naomi talking about the Belt needing the PMC to keep the balance of power equal with Mars and Earth? Well, she wasn’t talking hypothetically there. She was admitting something to Holden, something we’ve all known since early in the season, but that Holden is made aware of at the end – Naomi didn’t send the rocket carrying the PMC sample into the sun as Holden asked. She faked it. The Belt does have the PMC now as she admits giving Fred Johnson its location. Holden’s look is one of both stunned betrayal and dizzying comprehension. Sometimes, when you say “no more secrets,” you’re not fully prepared for what that means. Holden’s look seemed to confirm that.

So, here’s where we are: What’s going on in the crater on Venus? Are Miller and Julie Mao somehow still “with us?” What was the complex Dr. Strickland had Mae at? How does Naomi’s admission to Holden about the PMC rocket going to The Belt affect their relationship? How does Amos move forward during this interesting time of self-reflection? How will Bobbie Draper fit in with Chrisjen and Cotyar’s world? Will Errinwright get what’s coming to him — and will it be painful? Where do Earth, Mars and The Belt go from here? How vast an influence does the PMC have moving forward? And those are just a few of the questions that we will be left to ponder for season 3. So, hurry back. We need answers.