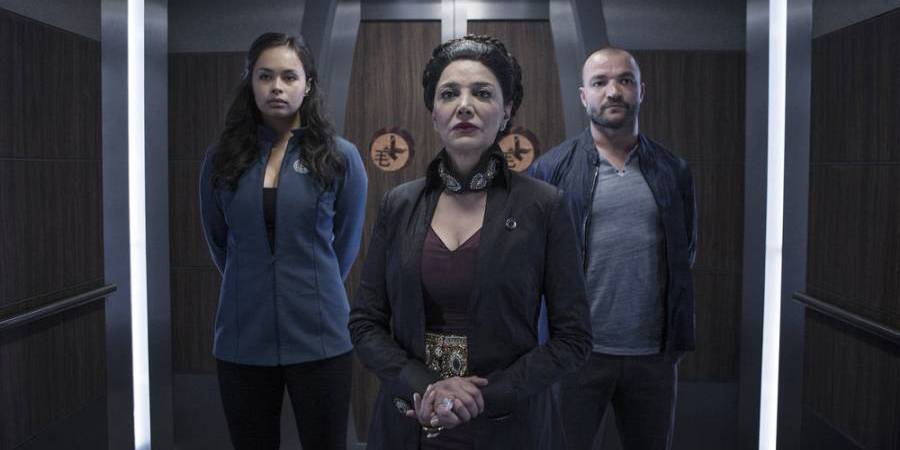 From laser focus to a nice turning of the tables and some well-earned redemption, Ep. 212 of The Expanse delivered interesting twists and turns during “The Monster and the Rocket.” When it was over, we found Captain Holden doing the right thing to support Naomi Nagata’s “right thing” while others were doing their own twisted version of the “right thing” as they saw it. Good? Bad? Who knows, though one character’s about-face was a fun little end run around his apparent humbling acceptance of much naughtiness. So, that’s always fun.

It was interesting to watch Captain Holden’s single-minded determination to find the “being” that was the protomolecule (PMC) unleashed in human form and destroy it. He led the Rocinante through its “search and destroy” paces on Ganymede and would brook no interference or attempt to lead him from that course. He came to Ganymede to destroy the PMC and in this episode’s early moments that was his sole purpose. His commitment was impressive — and intense. 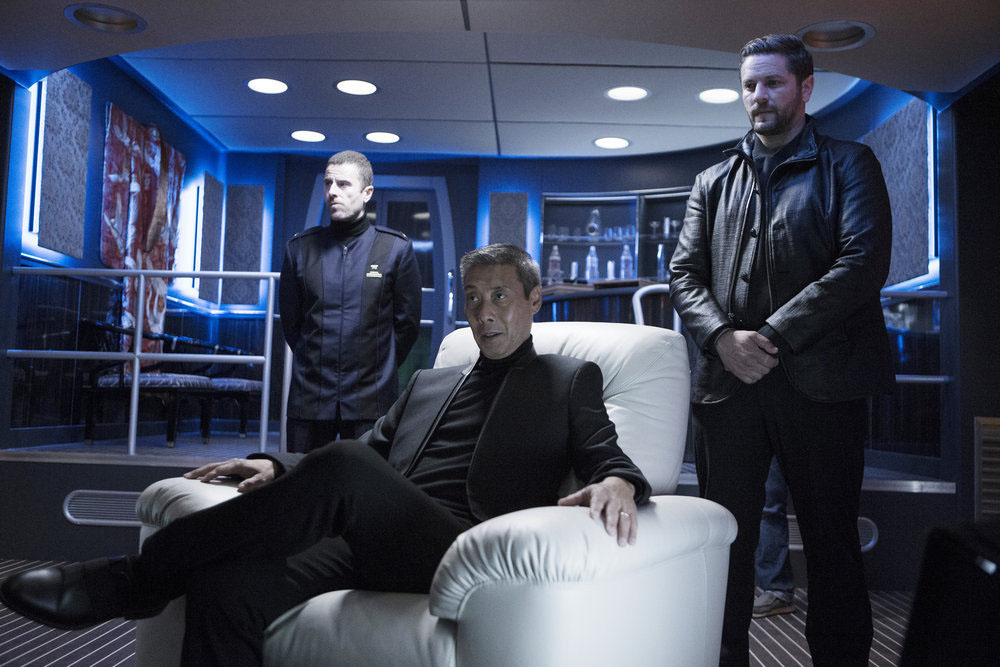 He pushed the Rocinante, Alex Kamal and Dr. Meng, hard. Meng, who still holds out hope for his daughter’s survival, wanted to take a more scientific approach to our new creature – “Don’t talk down to me, plant guy,” Holden barked. Alex felt Holden was being reckless and putting the Rocinante in danger, noting that the PMC may be luring them in. It was all to no avail. Our fearless captain, spurred on by the thoughts of Eros, wanted to kill this thing – whatever it was. So, for most of the episode, they tracked the PMC, hoping for a kill shot. You could see a near desperation in Holden’s eyes. He wanted it – bad. It was good stuff.

One of the interesting things about this episode for me was the depth we got to explore a bit from U.N. Undersecretary Sadavir Errinwright. Faced with hearings about his involvement with Jules-Pierre Mao and the PMC, we see him doing some soul-searching, taking a little family time and generally being humbled to the point of depression. His world seemingly was crashing down and it appeared all that was left was for him to pay the piper. We haven’t really seen much of this type of humanity from Errinwright, so it was a nice little peak behind the curtain of a politician and manipulator who appeared to be one step from being pushed out of the game – a game he loves.

Fortunately for those of us who have distrusted Errinwright from the outset, even in this tough period of self-realization and contrition, he comes through by episode’s end. That’s our little U.N. opportunist – poison a guy into a heart attack, then let Mao and Chrisjen Asavarala know how you really feel about this nightmare you’ve been facing alone. I won’t spoil it with a lot of detail, but suffice it to say that Mao and Asavarala finally have their face-to-face in the Mars-UN neutral zone and their meeting is interrupted by a message from Errinwright. And he’s not happy about how the other two have acted and is inclined to let them know about it. “Get back to work,” he tells Mao. As an aside, I have to say at this point that I’m fairly impressed at how confident and poised Mao always seems to be. He’s got a self-assured manner that is at once compelling and irritating. I loathe him, but respect his arrogance. Does that make sense? 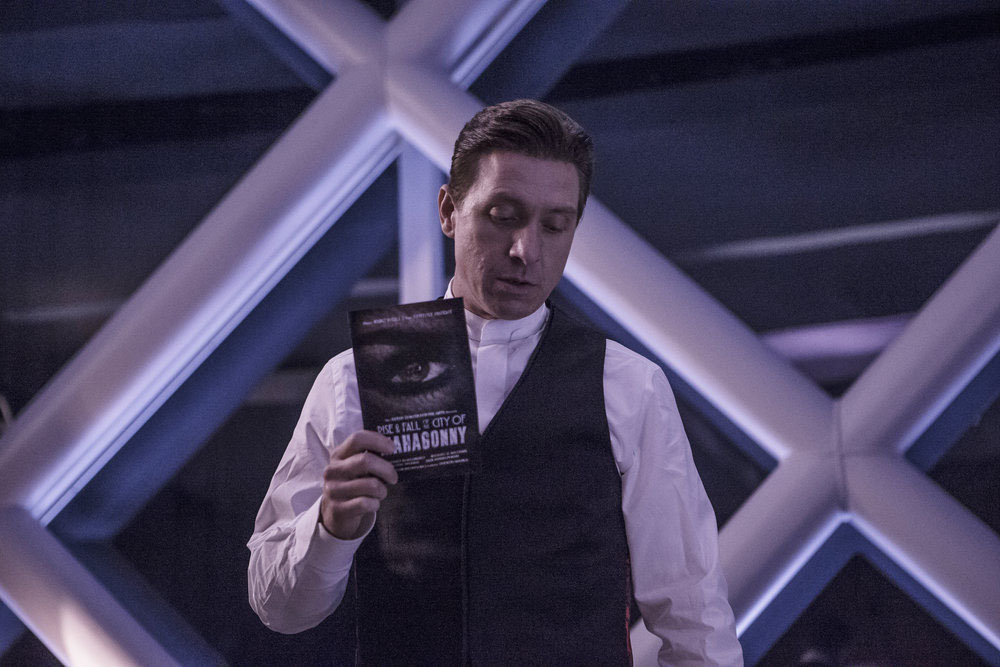 THE EXPANSE — “The Monster and the Rocket” Episode 212 — Pictured: Shawn Doyle as Secretary Errinwright — (Photo by: Rafy/Syfy)

Anyway, Errinwright’s power play toward Chrisjen and Mao was a stunner. Mao suggested that he wanted to make sure Earth and Mars would each have access to the PMC to keep the balance of power on an even keel, but it appears Errinwright is an absolute “Earth first” guy. How this will play out should very interesting. Is Errinwright down and out or on the rebound in a big way? Maybe he just doesn’t give a crap anymore and is daring both to cross him? We shall see.

I have to note that in the buildup to the meeting in the neutral zone (Where were the Romulans?) former Martian Marine Bobbie Draper and Chrisjen’s “man of many talents” Cotyar have several playful verbal jousts. I enjoy a nice dose of quick-hitting verbal sparring. I think that it gives the writers a chance to be creative in a small box of words. This battle of snide remarks ended in an inadvertent confession from Cotyar. Interesting moment, that. These are two characters I really enjoy and in this episode they have some longer scenes together, so we get a chance to enjoy the intelligence and attitudes they bring to the table. My hope is Bobbie and Cotyar get more screen time together. Combatants, to your corners.

If you remember, Naomi and Amos broke off from the rest of the crew to offer assistance to the woman who now captains the Somnambulist. If you also remember, Dr. Meng noted that the Ganymede systems were “cascading,” which meant air and other life support systems were failing, but no one really knew it at that point. Well, they know it’s happening in this episode and the Somnambulist is the last ship available to take off refugees – even under the threat of a Martian no-fly zone. 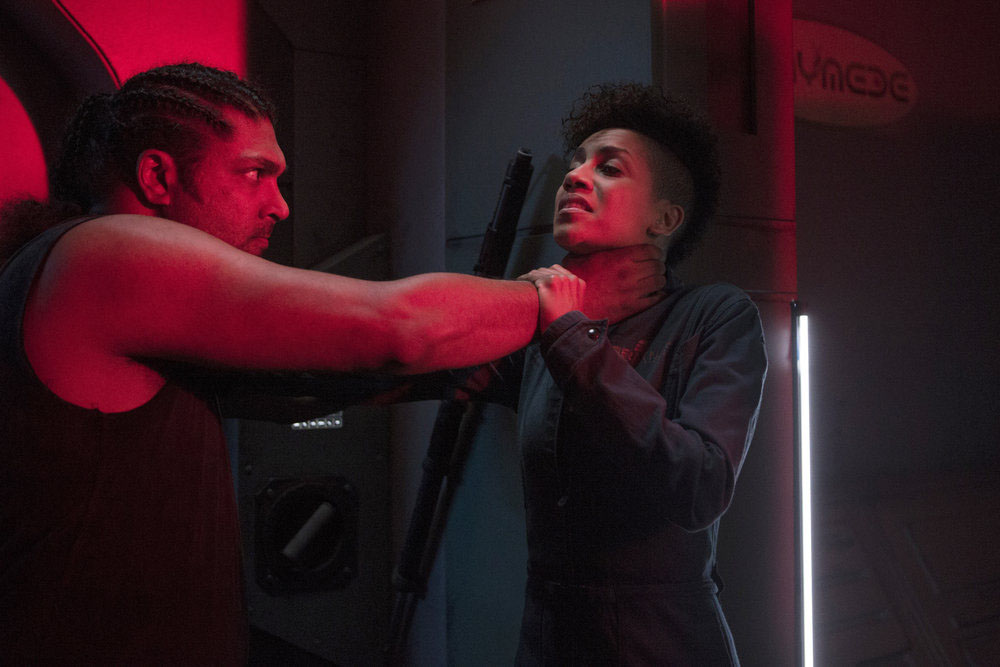 THE EXPANSE — “The Monster and the Rocket” Episode 212 — Pictured: (l-r) Gugun Deep Singh as Champa, Dominique Tipper as Naomi Nagata — (Photo by: Rafy/Syfy)

It’s here Naomi finds a modicum of redemption. The horrors of Eros, and the inability to help more survive that disaster has been gnawing at her for a while. It is here, as Ganymede is about to implode, that she finds a chance to “make it right,” as it were. And while there are hard decisions to be made and people to be left behind, she is key in saving 52 additional lives. We also get a poignant look into the mindset of the Belters, some of whom willingly sacrifice themselves for others. A dose of honor there. It’s also here that, as the Somnambulist lurches into the skies, that Captain Holden must make a choice between hunting this “thing” that terrifies him so, or helping Naomi, Amos and the refugees.

As their ship takes to the skies, the Martians fire on the Somnambulist. Moments before the rocket destroys the ship, the Rocinante’s guns destroy the rocket, saving the survivors – for the moment. It’s in the seconds after saving the Somnambulist that Holden demonstrates his badassery moving forward. As the Martians prepare to fire again, he has a simple message for them, ““Any ship that opens fire on us will feel the sum total of our state-of-the art Martian arsenal rammed up its ass.”

Ah yeah, there’s nothing like a threat with rectal ramifications to make a potential enemy stop and think things through. It was a good moment for our captain and a fun moment to watch. Well, we are getting down the end, folks. Season 2 has been tremendously entertaining and interesting so far, so I’m looking forward to seeing how they close it out.