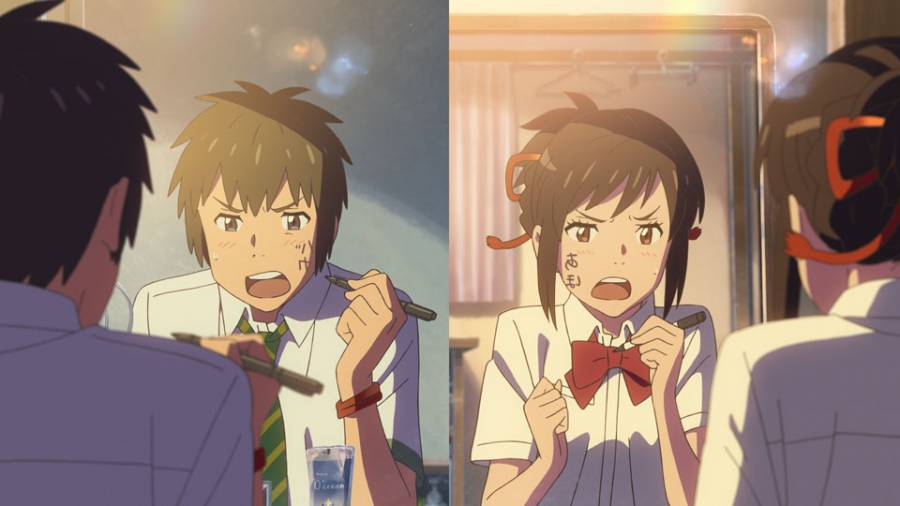 Interviews With The Voice Cast of ‘Your Name.’

Your Name is one of the highest grossing anime film’s in Japan reaching levels like that of Spirited Away. With its release in North America, the critical consensus is outstanding for the film with a 97% rating on Rotten Tomato. It is not all that surprising considering the director and the story of the film. Makoto Shinkai is no stranger to stories with deep meaning that you have to watch more than once to catch.

We spoke with the lead voice actors and ADR Directors for the english dub of Your Name to discuss its success in North America. Stephanie Sheh (Mitsuha) and Michael Sinterniklaas (Taki) discussed the differences in directing a film versus a tv series and the beauty behind the story in Your Name.

Your Name. has been a massive success worldwide. It has brought in a much larger audience with its story that appeals to non-anime fans. Did either of you watch the subbed version of the film or read the novel prior to tackling the roles of Taki and Mitsuha?

Michael: We had no idea about the story beforehand and for me that’s kind of important. The film was still in theaters when I got the subtitled version. It was under strict ‘you cannot share this’ rules. The film wasn’t initially given to us to voice, it was given to us to direct. We reviewed it knowing nothing about it and got to experience every single gut punching moment as it happen. I didn’t know there was body swapping in the story, did you?

Stephanie: I don’t think Michael knew up front but I did. When I was spot checking the script, I came across that. But Michael is smart and figured it out pretty quick.

Michael: Or I have seen enough anime to know what was going on.

Stephanie: It has been really hard to promote. We are huge fans of the source material. Then we try to get people to see it and they ask “what is it about?”. And we go “Can’t tell you that, just go see it”. Or people will ask what our favorite scene is.

Michael: And we go “can’t tell you that” cause it would spoil the film.

You both directed and voiced characters for the dubbing of this film. Can you talk about the differences in doing ADR work on a film versus a weekly tv series?

Michael: Doing a series is actually easier. It is more work but once you establish the show and establish the cast there is a lot less upkeep to worry about. Every time you do a film you have to reinvent the wheel every time.

Stephanie: What made this film so tricky was the source material in terms of regionalism. That meant we had to figure out how to do that. In Japanese there is a distinct dialect. So we have to ask are we doing an accent? What kind of accent? How heavy and how strong would it be? And when we are playing each other in the other bodies there is a vocal change. How big is that vocal change? The change was fairly subtle. The tone of the film is magic realism so we didn’t want to go too cartoony or heavy-handed with the vocal changes. If you look at the way each character interacts with friends and family; if we went with too strong of an accent the way the family and friends react would not make sense.

Michael: I think the accent in the characters really fleshed out the world. It feels so family and towny. The accent is somewhat invented. Sometimes accents can end up sounding a little too southern, so we started with more of a midwestern style accent and grew it from there. It was a funny story, because it was a spoiler, when the trailer first went out people starting asking about the funny vocal changes for Taki and Mitsuha and we couldn’t say why. 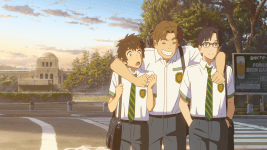 Stephanie: I wanted to go back to the earlier comment about how Your Name has reached such a wide audience. I think that is such a credit to the fans. When you think of other anime films which have had a wide audience you think of Ghibli films. Those have much wider distribution, and much larger companies with more marketing dollars to be able to put up billboards and tv ads. For Your Name., Funimation is releasing it and there is much more limited resources. It’s in about 300+ theaters, versus the much larger number Ghibli films get, and yet it is doing so well. It’s a testament to the anime fandom and the press who have supported this film and brought their friends and family to go see it.

Michael: We have done a lot of work with independent anime films and the industry is really hard, theatrical especially. Home video has been gutted, and it’s really hard to make money on anything. For a film without a major studio behind it, it’s amazing. If you look at the UK it was #3 there, even though it was on a quarter of the screens of the other top films. I think the interesting stat to look at will be what Your Name makes per screen. Because it’s not on as many screens.

Stephanie: I see a lot of fans on twitter who had already seen the film, perhaps not legally, but they loved it so much they went out and bought tickets to go see it again dubbed. I also saw fans who saw it in theaters and then went again with friends and family. There is a lot of repeat viewing, which is extra amazing to see.

Michael: I think this is a film that warrants a second viewing. 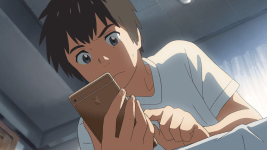 One of the benefits of a partnership like the one formed by Funimation and Crunchyroll is increased accessibility to titles for more fans to watch anime legally. With that easier access, and a film like Your Name with a broader plot that appeals to more people, you end up with the success that Your Name had.

Stephanie: I totally agree. It is one of those films that you want to bring your friends to so you have someone to discuss it with afterwards. And it is definitely a great starter anime for people who don’t know anything about anime. Or are normally off put by it. I invited a bunch of people to see it and many showed up who normally don’t watch anime and they loved it. It’s great because those are the people that social media might not normally reach because they are not in that demographic.

Michael: I had a layover in AZ when I was flying back from NY to LA. I ended up getting delayed and delayed and it ended up being an overnight thing. It was terrible but I called up a friend and went to go see the film and they brought some friends who watched anime but didn’t know anything about the film and they loved it. It was really cool.

Many fans enough the film because the characters are relatable to someone they know or to themselves in some way. So what about each of your characters did you feel was relatable to yourself? 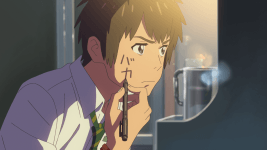 Stephanie: For me, when I was a little bit younger, the sense of feeling like you don’t belong. And when you have your friends and you are a bit more comfortable you are a bit more outgoing. I am Asian and I have Asian parents and I was pretty much raised to be proper and do things in a slightly more traditional way. And so that is something I relate to.

Michael: My strong feminine side. Which I guess is relating to her character…wait a minute. The first thing I could relate to with Taki, because he is a pretty feisty guy, is his scene of melancholy. Searching for something but not being quiet sure what it is. We learn in what they say about him more than what we see on-screen. He got into a fight recently, he has a bandage on his face. He is quick to stir. You see him pushing or fighting for something, but you don’t see him starting the fight.

So now for the juicy question, which won’t be what you favorite scene is (no spoilers!). Whats one word to describe your favorite scene?

Michael: Wait I can answer that with one word: Sharpie

Stephanie: My one word would be: boobies

If you haven’t seen the film yet, those two responses could be taken the wrong way (or the right way) but once you see Your Name, it will all make sense! 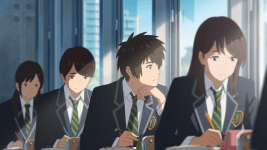 So for the non-spoilers question: If you had a choice in your personal life to live in the country OR live in the city, which would you choose?

Michael: I actually live in two cities so I am doubling down on the urban side of that. For better or worse I live between New York and LA. My studio NYAV is bi-costal and I am always going between the two. I really appreciate going to the country when I get an opportunity to because it’s so different from everything I see. It would be hard for me to give up my gyms, there is nothing for me to level up with in the country. But Pokemon go might not be the best of reasons to stay in the city. Maybe. I think that both characters in Your Name spending some time in each others environment really helps them understand who they are. If you have the means, try to travel. But if I had to pick, it would be an island. With crystal blue water, like a windows screen saver.

Special thanks to both Stephanie Sheh and Michael Sinterniklaas for taking the time to chat with us about Your Name and the world of ADR directing and voice acting. They are passionate about their craft and that is always awesome to see. It is reflected in the hard work shown with the final product. Be sure to follow Stephanie and Michael on twitter.

The critically acclaimed anime film from director Makoto Shinkai brought in an excess of $1.7 Million at the box office from some 303 theater screens during its opening weekend. The movie, with a per screen average of $5,281, placed 4th among new releases and 13th place in overall box office gross among all films in the United States.

If you want to learn more, check out our review of Your Name. The film is still in theaters through the end of the month. Do yourself a favor and go see it. You can still get tickets at FunimationFilms.com