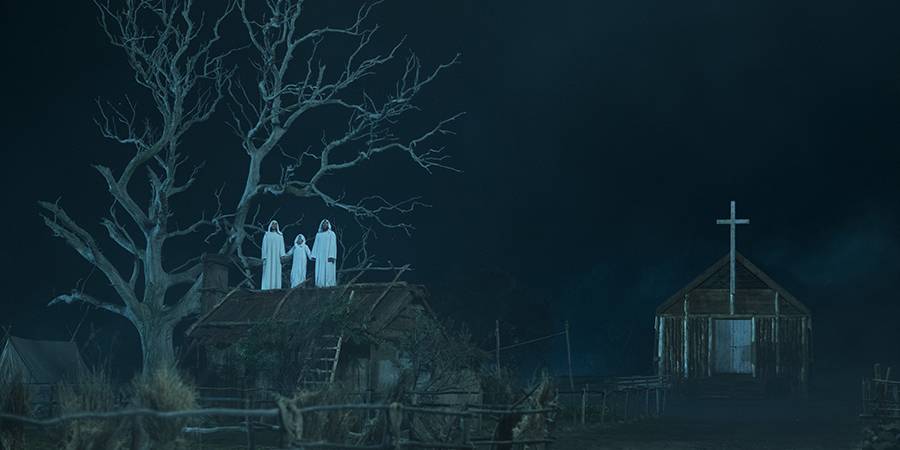 The Leftovers Season 3 Premiere is here, finally! Since we have a time jump, it’s a good idea to recall where we left off. Let’s start off by talking about that opening scene and then a quick review of the major characters’ story arcs last season.

Every season has had a “cold” opening which shows us a piece of the Leftovers’ world, but not necessarily something relating directly to the main characters. This one looked a lot like a reenactment or reinterpretation of an event known as the “Great Disappointment”. In 1844, a man from upstate New York named William Miller developed a significant following in New England. The focus of their shared interest was Miller’s sure prediction that Christ would return and the world would subsequently end on a certain day in 1843. When that day came and went, he kept the day and moved it back a year, to 1844. Does this sound familiar? Millerites were also shunned and laughed at in their communities, like the family depicted in the opening. When the second date came and went, the event became called the “Great Disappointment” (although being disappointed that the world didn’t end is tough for this reporter to reconcile). Discussion point: we think the other members of the sect committed suicide on the night of the third date rather than suffer any more ridicule. What do you think?

When we left Kevin last season, he’d been poisoned, shot, resurrected twice, sleepwalking with intent to commit suicide, and recently having gotten rid of the ghost of Patti Levin, Season 1’s antagonist.

Season 2 ended with Nora, the character we refer to as “The Best Girlfriend on TV,” having rescued baby Lily from being trampled on the bridge to Miracle by rampaging Guilty Remnant jerks. She also had an episode largely dedicated to her called, “Lens,” which beyond that episode, was an unexplored branch in her story. Since we trust Damon Lindelof and don’t expect him to dedicate 10% of the season to a narrative black hole, we bet we come back to this “Lens” business this season.

For most of Season 2, Tom and his mom, Laurie, were separated from the rest of the cast. By the end of the season, Tom had made his way to Jarden and was willing to play the part in Kevin’s family he’d been estranged from. First he had to be raped by the diabolical Meg and then become a little obsessed with her though. As you do when you are on the run from your exploitative mother on the way to Texas.

Jill, in comparison to Season 1, was much more easy going last year in Texas. She had some heart to hearts with Nora, watched Lily quite a bit, and tried starting some romantic business with Michael Murphy. Other than that, Jill stayed very quiet (and away from school).

Laurie made her mark in just a few episodes last year. And by that we mean on the backsides of all the Guilty Remnant members she ran over with her car. She also had that epic scene when she attacked the book agent / editor people. The most important plotline she had last year was when she was using Tom’s “healing hugs” to take advantage of damaged, post-departure people.

By most other story standards, Matt has gone through the kind of stuff that would have made his character the headliner of his own series. Last year he moved to Jarden, lived with waking-coma Mary in a tool shed, played second fiddle to another pastor, became stranded outside city limits after being washed out of a storm sewer, and became some kind of quasi-mayor of the tent people outside Jarden.

John began Season 2 as Jarden’s self appointed chief arbiter of any and all mysticism. He ended up with a wife who hated his guts, a daughter in the Guilty Remnant, a son you can’t really complain about, and his whole internal concept of rationality destroyed. Talk about a character arc!

Erika began the season all set to leave John. She postponed her plans during the search for Evie, but the relationship between John and herself continued to deteriorate. When John ended the last conversation we saw them have last year with, “Eff you, Erika,” we had a sense her plans to depart Jarden were suddenly back on.

Michael wanted to save people last year. He gave random people he wanted to save water from the spring, he followed through with his grandfather’s scheme to help Kevin come back to life by burying him first, and he also wanted to save Jill by helping find a faith she has probably lost forever. That’s a lot for a teenager to take on.

Evie was one of three girls to stage a “secondary departure” in an attempt to show the world that no one was exempt from the Departure, not even Miracle. She and her fellow departees eventually came back and instigated the riot that just about burned down Jarden.

Meg must have gotten into the Guilty Remnant’s high-potential job training program. In the first season, she was just a raw recruit. Last year, she graduated to full-on Bond villain. It’s like she took what she learned from Patti’s grand gesture in Mapleton and wanted to multiply it by 100. She didn’t count on an immortal Kevin Garvey though. 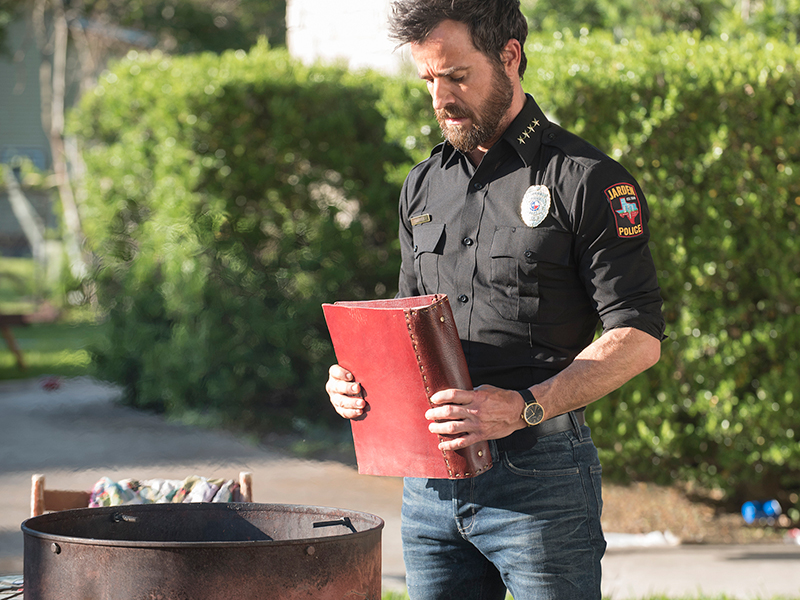 The Story So Far

In our end of season podcast last year, we predicted the show would have a time jump going into this season. We felt taking the town back from the Guilty Remnant would make for some great action. The Leftovers, however, relies on character, not action to tell its story. Picking up at the next point in our characters’ lives when things became interesting felt like the best move. I’m glad to see they did it and I’m glad to see how they did it.

When Kevin picked up the night stick during the Fall of Jarden last season, it was easy to predict his return to law enforcement. You probably detected Kevin actually picked up a little southern lilt and adopted a more easy going approach to match his environment. He acclimated to Texas living, reflecting Justin Theroux’s own feeling that he could “retire there”.

The time jump also gave all of the other main characters a chance to make drastic changes in their lives. Matt is fully in control of the congregation at the local church. Jill is off at school (and what a positive change that was!). Tommy is an officer in Kevin’s Jarden Police Department. For a show known for bleakness, seeing the Garveys and Murphys in a better place then we left them, was welcome to see.

Who saw John Murphy and Laurie Garvey hooking up? Given the way the Murphy clan strained and eventually broke last year, we had no doubt Erika was never going to stick around. Sure enough, she and John called it quits. Watching John and Laurie operate their con had us wide-eyed with pleasure. John burned down his friend’s house for running the same con last year. Now he’s doing it. Last year, Laurie was willing take advantage of people’s need to feel better by selling Tommy’s healing hugs. This year, she take’s this a step further, colluding with John. Makes total sense. She always rationalized away cheating desperate people with the idea that as long as they felt better afterwards, it doesn’t matter how they got there. In a post-Departure world, is she wrong?

Damon and Tom took the boogeyman from the last two seasons, The Guilty Remnant, and dismissed them from the stage with startling finality. Although the the Bureau of Alcohol, Tobacco, Firearms and Cults (ATFAC) was pretty much absent last season, they’re still very much functioning. We wonder if, back in season one in Mapleton, that ATFAC agent Kevin dealt with had a similar fate in mind for Patti’s chapter. We think this is a way to tell us viewers that whatever Kevin and friends are going up against this season makes the Guilty Remnant feel trivial in comparison.

What was Dean the Dog-Killer doing in Jarden? Season 1 didn’t hold back with tossing out half-identified quasi-mysticism and the Dog-Killer was right there in the middle of it. Was he real? Was he human? What was his deal? He knew more about Kevin than he should have and seemed to know something about the larger narrative. Now, he just seems crazy. In a very human way. Why did he come all the way to Texas to show Kevin a sandwich? We don’t believe he’s crazy to think something else is going on, but it feels like he seriously lost his way with the whole dogs-becoming-human thing. The fact Tommy shot him in the head doesn’t necessarily preclude us from seeing him again this season though. Bring him back to explain himself a little, please.

Kevin’s sanity was also brought into question. Last season he survived many brushes with death. This season he taunts death by asphyxiating himself with dry cleaning bags. “But I’m better now,” he says. He also confused the events from International Assassin with reality when he told Tommy about killing Patti. Tommy let it go, but we think he logged it in as a possible indicator of future Kevin-craziness. Is Kevin “better”? He’s holding it together a lot better than last year, but that’s no great feat. We know our cast goes to Australia and we bet Kevin is going to have to be a little “crazy” to have that make any sense to the rest.

That looked to be an Old Nora, now called Sara, collecting birds for a nun at the end. God, we love this show. This is the kind of mystery I can’t wait to be let in on. Why jump so far ahead? And why does she not admit to knowing Kevin? Things might go way off the tracks, but at least the world doesn’t end.

Kevin won’t be able resist and will read at least some of The Book of Kevin.

Matt will not “tone it down”.

Nora is going to want a baby.

Mary: He’s writing a book about you. He figures the New Testament is getting old.

Kevin: Paw. You mean -paw- on the button.

Matt: The beard looks good on you.

John: We can’t all be going through this for nothing. 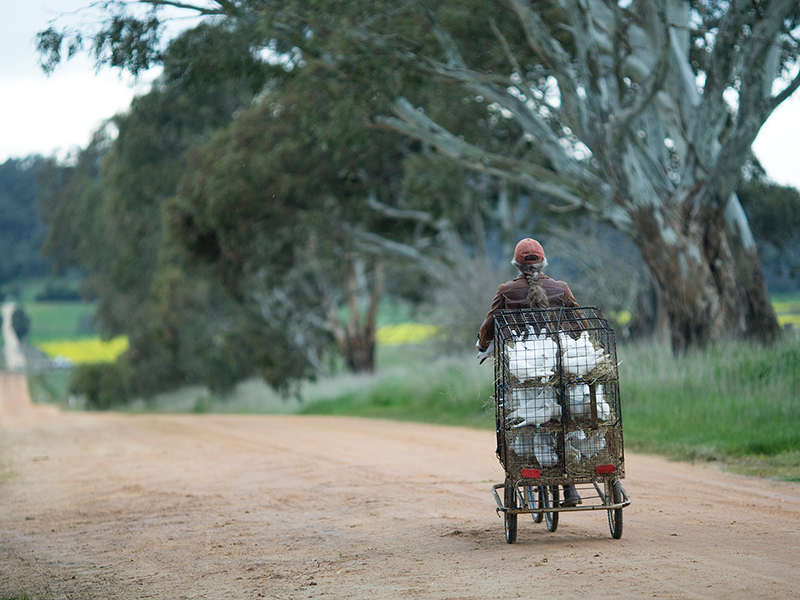 Listen to our Leftovers podcast: 301