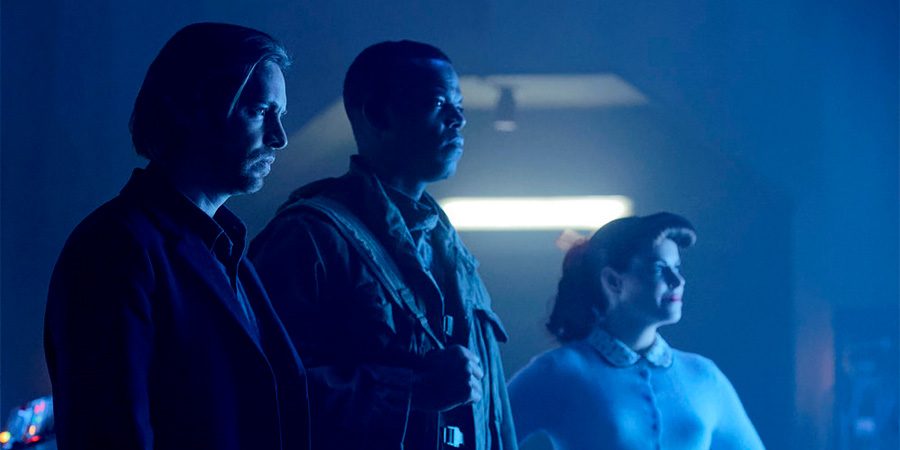 Everybody still with me here? It’s only night 2 of the 12 Monkeys Season 3 binge, but we’ve all just digested 7 episodes of a mind-bending show in two days! We haven’t exactly discovered extraterrestrial life or anything, but I think should still pat each other on our collective back.  We’re playing a role in SyFy’s experiment and I can’t wait to see how the numbers come out. Forget about numbers though. Let’s talk about what we just saw. 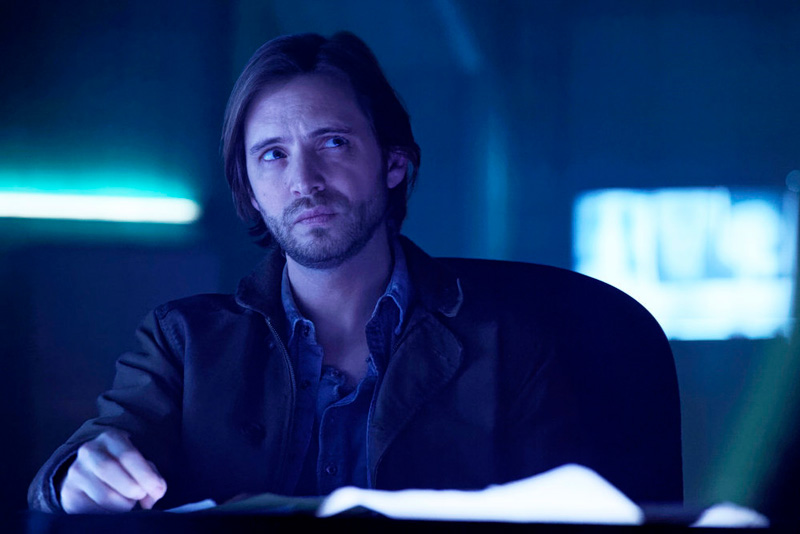 Cassie and Cole may not have changed their Facebook statuses back to “in a relationship” yet, but their united front started in this episode. They figured (correctly), that if anybody else discovered their parental relationship to The Witness, they’d become targets. Little moments throughout this episode gave me hope about the couple. After all, Cole reset time and erased their relationship with out asking her, but Cassie acted like the reset didn’t actually take with her. Her continued pregnancy after the reset AND her persisting affection for Cole strike me as odd. This show reveals only what it wants to and accidents never seem to occur. I think Cassie is part Primary or something along those lines. That would go a long way to explaining how The Witness has his power: he got it from his mom.

Jennifer took charge in this episode with a plan. She also performed well as team leader on the mission. I took a lot of pleasure in seeing Jennifer’s character get some payoff for something other than acting crazy. We all should have taken notice tonight about a couple main points with Jennifer: 1) She is incredibly capable, especially with improvisation and 2) She sees that there are teams within Team Splinter and she’s made her pick. Let’s keep an eye on that.

While Olivia had the best scene of the episode (see below), Deacon had the best lines. Calling Olivia Gozer was awesome!

We get our first glimpse of The Witness as a boy.

I don’t know if awards are handed out for spectacularly performed scenes or not, but Olivia (Alisen Down) deserves some recognition for channeling Jennifer Goines during her description of the heist. Really amazing work there.

Go check out the 12 Monkeys interview for some funny banter between Aaron and Amanda concerning their 80s costumes.

“Be cool. This is a robbery.” – Deacon paraphrasing Tim Roth from Pulp Fiction.

“It’s Gozer!” – Referring to the big boss bad guy in the original Ghostbusters.

Jennifer kept her crazy on a pretty short leash in this one. Can she keep it up?

Will Cole come to reason and return Cassie’s affection?

Why give Cole the watch? Wouldn’t that hork causality? 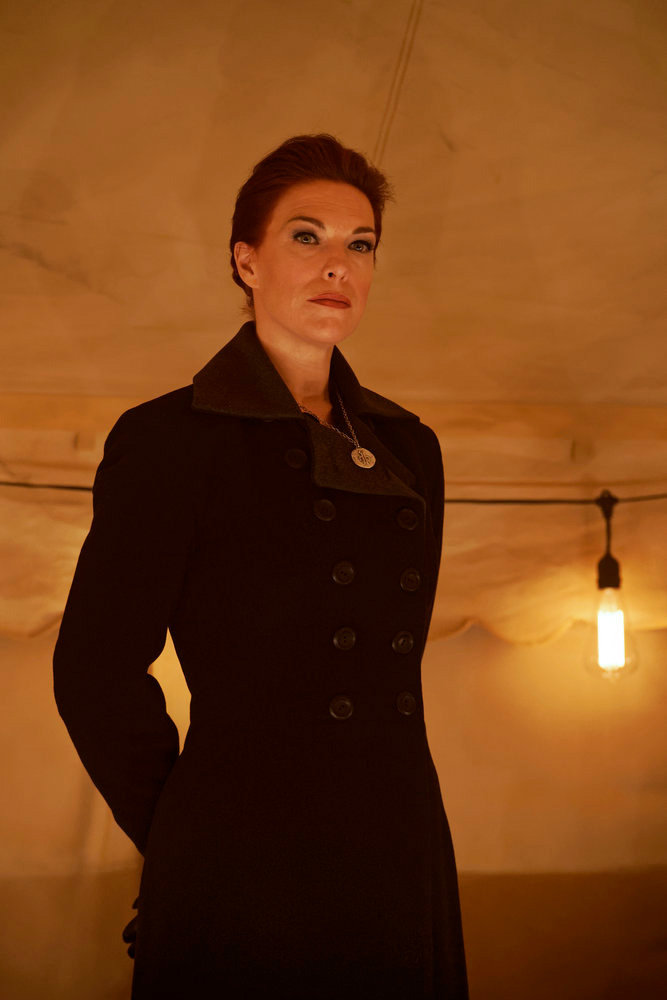 Cassie and Cole team up with lovable do-gooder, FBI Agent Robert Gale for some information and problem-solving skills. As usual, Gale doesn’t disappoint the time travelers. He even steps up his game after learning about his pending demise in Germany. Some shows treat cops or feds with some disdain, but in Gale, Matalas and crew have given us a good old-fashioned American hero. I hope he comes back.

As for the Witness’ parents themselves, they have to ‘witness’ something pretty horrible: their own child killing a tent full of people. With the Witness himself led around by several adults, his choice in the matter is highly questionable. Through it all, they close ranks, stick together, and even manage to knock off one of the Guardians.

Jennifer doesn’t have a lot to do this episode. The writers kept her busy seeing ghosts and drawing like crazy. The Witness and Jen commune through their Primari-ness. They might be the only two left at this point in the narrative. I bet this means something for their future. Then again, Olivia spent some time messing with Jennifer’s head this episode. I know she’s more like the template for the Messengers, but does that have anything in common with being Primary? I think the Venn diagram overlaps a little for Primaries and Messengers in terms of psychic ability or ESP or something.

Christopher Lloyd’s character, Zalmon Shaw, turns out to be Pallid Man’s father. That family certainly has an affinity for black clothing and hats. After seeing the way Pallid Man holds his pro-Witness seminars in the bowels of Titan with such panache, we now know where he learned his game – serial murdering tent revivals. Papa Pallid provided a creep factor that reminded me of the villain in Poltergeist II. Don’t believe me? Follow the links. See? I’m right.

Jennifer’s Witness impersonating ghost – Jennifer calls it a “she”.

Cassie and Cole collect a splinter-vest from the Guardian they killed. Jones will now get to try and reverse engineer it and master its tech.

The gas mask Athan puts on reminds me a lot of the plague-doctor mask the Witness wears in earlier episodes. Apparently, he has a long history of not wanting to breathe the same air as everyone else.

Deacon says he’s “not a red-shirt.” This refers to the hordes of nameless guest actors on classic Star Trek who died, horribly, after appearing in a single episode.

How did Christopher Lloyd‘s character score the freaky Momma Messenger? I mean, I’m sure he’s as charming as elderly niche religious sect preachers get, but… he must bring something to the equation. What is it?

Does Gale have another turn on the wheel of time next season too? 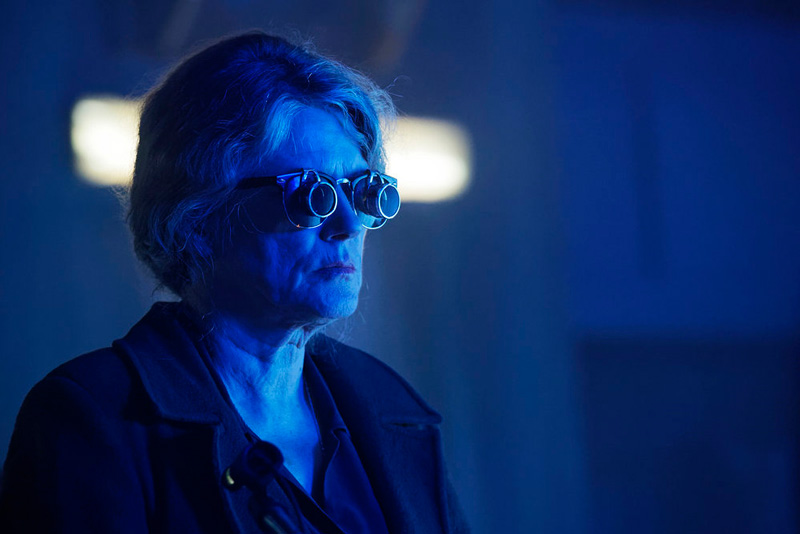 Cassie taking a moment to splinter back to visit her mom felt both good. Since joining the mission, Cassie hasn’t taken any “personal time” and of all of them, she needed the respite the most. Sure, the others have fought and been in lousy conditions longer, but Cassie’s journey has been a steeper climb. Plus, she just gave birth! A very natural time for a mother to want to check in with her own mother! Plus, Cassie’s mom provided some insight no one else on Team Splinter could have. Driven to save her son thanks to her mother’s belief that he is not in fact an evil person, she injects herself into the carefully planned mission. Good thing for everyone (except maybe Deacon) she did. While everyone else killed lesser Guardians and bystanders, Cassie scored big with disintegrating Magdalena. Eat it, witch-lady.

Cole’s cold-heartedness melted at the exact right time. Jennifer has always called Cole “Otter-eyes” and The Witness, now called Athan, inherited those same eyes. Like they do with Jennifer, the boy’s eyes stop Cole in his tracks. Whatever plans he once had to strike the boy down in cold-blood vanish and from that moment on, he and Cassie become fugitives from Team Splinter. Unless they reunite, I will call Jones, Deacon and that camp Team Splinter(ed). To be honest, I doubted Cole could have gone through with it. He sure had me going there though…

I agree with Cole; Jennifer looked absolutely adorable in that 50s get-up. Her inability to flirt also made her adorable.

Dr. Jones defines the adage that “hell hath no wrath like a woman scorned” in this episode. Deacon made her suspicious of Ramse’s death, so she investigated. Her intelligence made it an easy puzzle to solve after that. Can you believe she told the Daughters to open up on Cassie with their machine guns? Cassie and Cole hopefully got the memo: Jones ain’t playing.

Deacon has always led whatever group he was in. In Jones’ organization, he settled for a quasi-head of security role. Now, after apparently shedding his affection for Cassie (the bullets helped), he strengthened his new role as Dr. Jones personal enforcer, which is just about as good as being in charge. He will now pursue Cole and Cassie as if they were never allies.

Turns out the Guardians want to approach their duties with the Witness in each their own way.

Cassie and Cole acquire splinter vests in this episode.

Jones refers to time as if it were a ‘god’ to her. With Jennifer talking to time (near the machine) and Jones revering it, I think we should consider time a full-fledged character in this story.

Athan’s face doesn’t -look- evil. Does the title of the episode give away the secret? But if his future misdeeds all come from Nurture rather than Nature, how did the army of the 12 Monkeys even start? SOMEONE had to come up with the idea!

Will Cassie changing history with her mother cause any other repercussions besides a having a happy memory where a sad one used to be?

Talk about a cliffhanger! Team Splinter(ed) exists now in a state of civil war. Dr. Jones and Deacon make an unlikely twosome to save humanity, but I take issue with their “kill Cole and Cassie” policy. I can’t wait to see how this plays out and if the team can reunite before the end of the season.