The Leftovers 304, G’Day Melbourne, sets two of our main characters off on new, divergent trajectories. Let’s take a closer look at the final build up to this mid-season course change (correction?).

Damon and the writers usually disguise their foreshadowing a little more than with this episode’s opening song choice. “This Love is Over” by Ray LaMontagne and the Pariah Dogs gave away the show’s climax from the opening scene.

Before they even leave Texas, Nora sets off Kevin’s cop-sensors when she acts weird in the TSA security line at the airport. When Kevin starts asking questions about the reasons behind Nora smuggling money out of the country duct taped to her person, she distracts him with raunchy diaper table sex. Nora eventually explains her cover story, the whole “she’s only here to bust these guys (even though she has no jurisdiction)” bull. They settle into their hotel and the craziness starts. Nora convinces Kevin to stay out of her business while she deals with the Departure Microwave scammers and she sets off. Kevin, meanwhile, believes he sees Evie Murphy on his television and races off to find her. 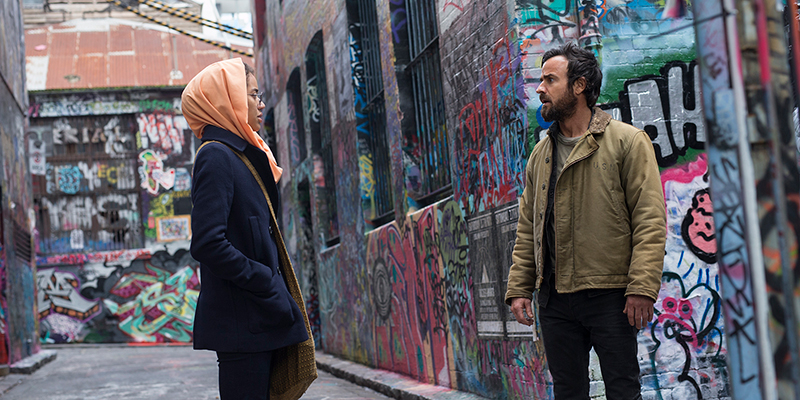 The Leftovers 304. Kevin (Justin Theroux) and Evie(?) (Jasmin Savoy Brown) have a surprise meeting in Australia. Image by HBO. Copyright 2017.

Nora, after a weird cosmic test of her will at the bus stop, finds the two European doctors and their entourage in some kind of textile mill or dry-cleaning facility. While there, Nora undergoes a series of physical tests to ensure her readiness for the Departure Microwave. Physically, she passes their tests, but ultimately fails a one-questions test they could have given at the beginning of the ordeal. The question holds some significance because we’ve already heard it from last week’s suicidal VW Beetle driver. Nora and that man gave opposite answers, and the doctors accepted neither of them to move forward in the process. This pisses Nora off.

Kevin chases after Evie and contacts Laurie with a picture of her to prove his sanity. Laurie uses her Google-fu and lets it slip that Kevin’s “Evie” works at the public library and Kevin eventually finds it with the help of a giant koala. Inside, he confronts “Evie”, who implores him to leave her alone. His cop-brain won’t turn off and knows she shouldn’t be speaking in an accent if she’s speaking to him honestly. He calls Laurie who admits she called the girl Kevin believes is Evie and asked her to play along with his delusion for both their safety. When Kevin realizes what Laurie says is true, he recognizes Evie as Daniah and he heads back to the hotel.

At the hotel, a pissed and vengeful Nora starts to tease Kevin about The Book of Kevin and insists he loves the attention he receives. Kevin returns fire and emotionally destroys Nora before leaving her in a burning room. Downstairs, he finds his dad and Grace Playford waiting for him. 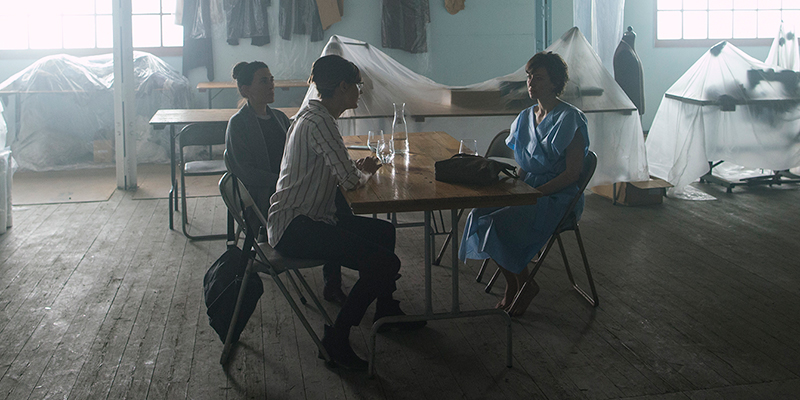 Take a look at the credits of the show some time. Although Damon and another staff writer usually take credit for writing the episode, they have given Nick Cuse “Story” or “Story Editor” credit all season long. Who is Nick Cuse? Nick Cuse has two claims to fame in Leftovers / LOST / Lindelof fandom. First, he’s Carlton Cuse’s son. Damon and Carlton co-executive produced LOST. (Seeing a connection yet?) Second, he wrote last season’s most talked about episode: International Assassin. After watching International Assassin and G’Day Melbourne back-to-back, we believe there are some strong connections. Let’s look at a couple.

We see the girl Kevin believes to be Evie holding a sign in the background of the G’Day Melbourne TV show. This sign reads “Surah 81”. (Disclaimer: Neither co-reviewer pretends to hold any knowledge related to the Koran, Muslim tradition, or anything like that.) For a lengthy interpretation of this prophecy, go check it out on the web. If you don’t want to read all that, we can share the high points. This passage concerns itself with the end of the world and the beginning of the next. If you recall last week’s review and our in depth look at The Last Wave, part of the Aborigine belief impacting that movie revolved around the world’s cyclical nature. In a way, we now have two sources tying into the show stating a belief in the world as we know it ending and a new cycle beginning. Here’s a translation of the actual passage:

Why does this song turn up, over and over again, in this episode? Go take a look at the video and see what you think. Don’t bother with parsing the lyrics for some deeper meaning. The video depicts two worlds, a real world where the girl lives and another world where her would-be lover lives. Neither world appears real to the other when they can see each other through the paper barrier separating them. The concept of two parallel universes, next door to each other with a gateway available to those few that believe and fight hard enough looms large in Nora’s personal plight this episode. 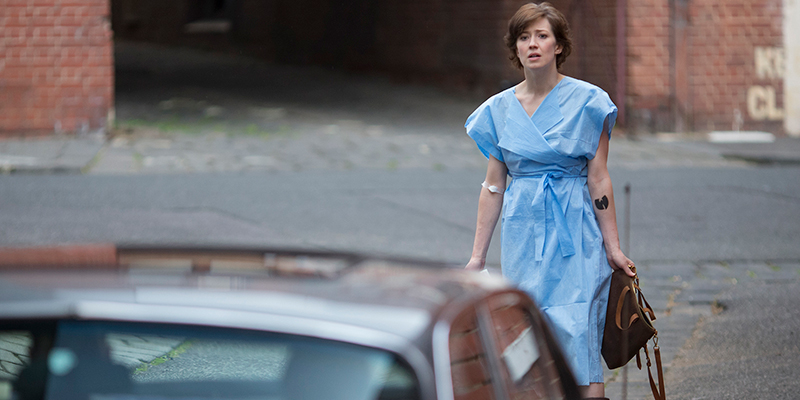 What Is Love (Baby, don’t hurt me)

Nora’s Freudian slip on the plane, about their “toxic, co-dependent relationship” set the stage for what followed. It also asks the viewer to take a look at their relationship to see if they agree. Recall last season when Patti chided Kevin that his family with Nora wasn’t, “love. That’s damage control.” What is damage control? One way to define it prescribes making the most out of a bad situation. We now see what she meant.

Since hooking up with each other, neither of them holds the other accountable for the crazy stuff they do. Ordering up hookers to shoot you in your bullet-proof vest? I won’t say anything about that if you don’t say anything about my clandestine adventures with dry-cleaning bags. While co-existing with each other in such a permissive atmosphere may seem to help get through the day-to-day grind, it provides no true foundation for the relationship. Kevin and Nora never talked about the big issues affecting their life together. One would act (usually Nora), and the other would just play it cool, like it was no big deal to them.

To truly co-exist with another person in this way, we think you’d find the relation would have to lack any true depth. You may enjoy diaper-table sex together, but when you need a buddy to smuggle money out of the country, you don’t even think about your partner? We’re afraid Patti was right after all.

Kevin has followed Nora around since the beginning of Season 2. Yes, he wanted to leave Mapleton, but Nora provided the destination of Jarden, where her brother lives. Nora decided to buy the house in Jarden without consulting Kevin. When he admits to his problem with Patti and sleepwalking, Nora handcuffs him to their bed. In this episode, Nora could have considered Kevin a partner and asked him to legally hold half of the $20k she needed to take to her supposed sting operation. Also, Nora confirmed what we feared concerning Lily. When Christine came and asked for Lily back, Nora gave her up without a fight and without asking Kevin how he felt about it. We learn she resents him for not putting up a fight, so he could never have made the right move in that situation.

The last straw to break Kevin out of his dependence on Nora came when he followed her to Australia, abandoning his responsibilities in Jarden. He realizes he’s in a relationship with a woman that can’t get over her personal tragedies and he can’t waste any more time with her. And boy howdy, does he let her know it!

This episode featured a lot of the storyteller’s hand moving our players into position for the final act. Kevin needed to be in a toxic, co-dependent relationship in order to follow her to Australia. Whatever psychic switch is flipped in Kevin’s head had to make him believe he saw Evie on G-Day Melbourne, thus driving him to try and find her. If he hadn’t seen Evie, his father wouldn’t have noticed him (in the same way Kevin noticed Evie). Damon has used characters seeing and hearing things before – it happened all over the island on LOST.

This storytelling tool can make certain events feel forced, but Damon usually finds a way to make it feel more like a legitimate “otherness” behind the show’s manipulation of the characters. On LOST, it was the island. On The Leftovers, it’s whatever Kevin Sr. called Kevin’s purpose in Season 1 (which we assume ties into the Departure). Dear God, we hope this all pays off. 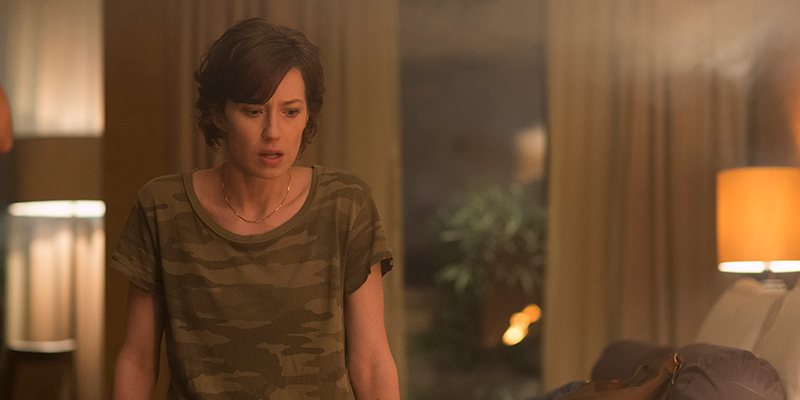 “I’ll tell them we’re in a toxic, co-dependent relationship and we realized we’re better off apart.” – Nora Durst

“Kids die every day. What’s one more? Of course I nod.” – Nora Durst

Remember a couple reviews/podcasts ago when Paul predicted the reason Kevin’s friends would come to Australia would be his madness? Well, we’re just saying we’ve seen pictures of Laurie, John, and Michael in Australia… We bet John and Michael join Laurie when she decides to try and help Kevin in person, in Australia.

With all this assassin-talk, we wonder if Kevin will have to kill someone.

A major, national or world event or disaster occurred. Something grounded all the flights, after all.

The big one: Kevin and Laurie reunite. Maybe not next episode, but before we finish.