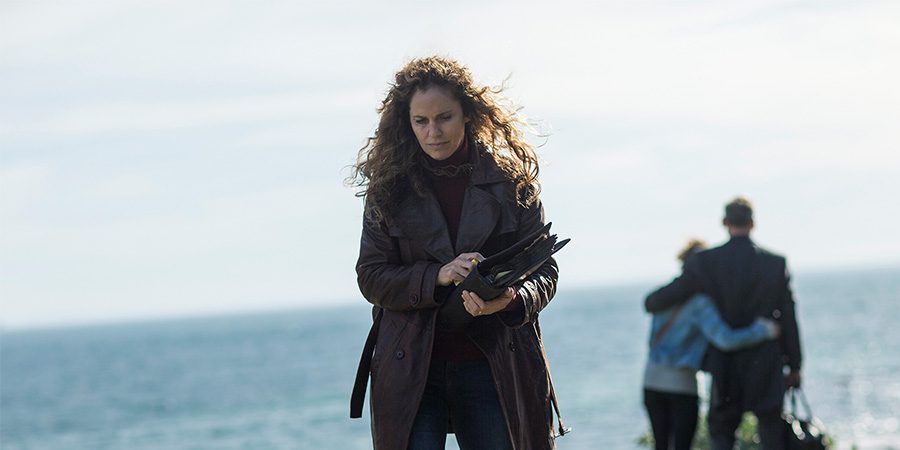 We open up with Sam’s mom visiting Laurie in prior life as a psychiatrist. The utter sadness of the tale gives Laurie the little shove she needed to begin her misadventure in the Guilty Remnant. First though, Laurie attempts suicide, but decides not to go through with it. So much vomit. She gets it all up, changes into all white, and joins the local GR chapter.

The narrative gets a little jumpy as we see the current story and Laurie’s memories of the previous couple days intermingled for the rest of the episode. We’re going to split it up between then and now. 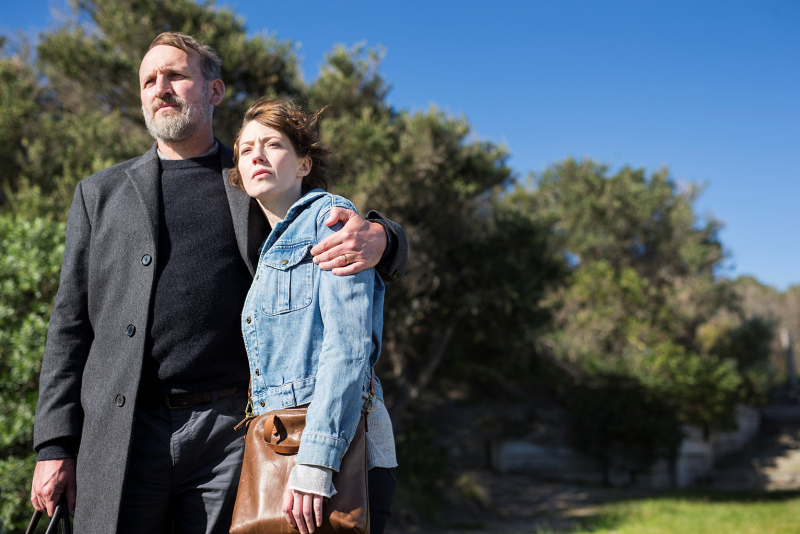 Laurie, Matt, and Nora stake out Dr. Eden and Dr. Bekker from inside a yellow VW bus.

In the lull, the two women chat. When Laurie refers to the Departure Microwave as a suicide machine, Nora takes offense and instead describes SCUBA diving as a much more elegant way to kill oneself. It turns out, Laurie is a certified SCUBA diver. The discussion of mortality shifts to Laurie and John’s con job back in Jarden. Laurie explains why she and John don’t “channel” departures – it really pisses people off.

Nora had her IUD taken out, but has no intention of “trying” for a baby. Nora needs a light to start a cigarette and Laurie offers her the lighter Jill gave her in Season 1. Then, Nora becomes a jackass and won’t give the lighter back to her. A scuffle ensues in which Laurie’s eye is blackened. The Dr.s pick that moment to drive away.

Nora drives the VW bus after the Dr.s. and Michael calls Laurie to ask her to come right away to Grace’s place.

Looking out one the sea, Nora, Matt, and Laurie watch Dr. Eden and Dr. Bekker prepare something large for transport. Nora starts talking about her parents and a baseball game some neighbors took she and Matt to. An usher deflated a beach ball in the stands and Nora can’t figure out why he’d want to do that job. Laurie says he’s preventing chaos by doing so. Nora gives Laurie the van. Matt stays behind with Nora and gives Laurie the burned Book of Kevin. He gave up on his mission after all. It looks like Nora will attempt another run at using the Departure Microwave. 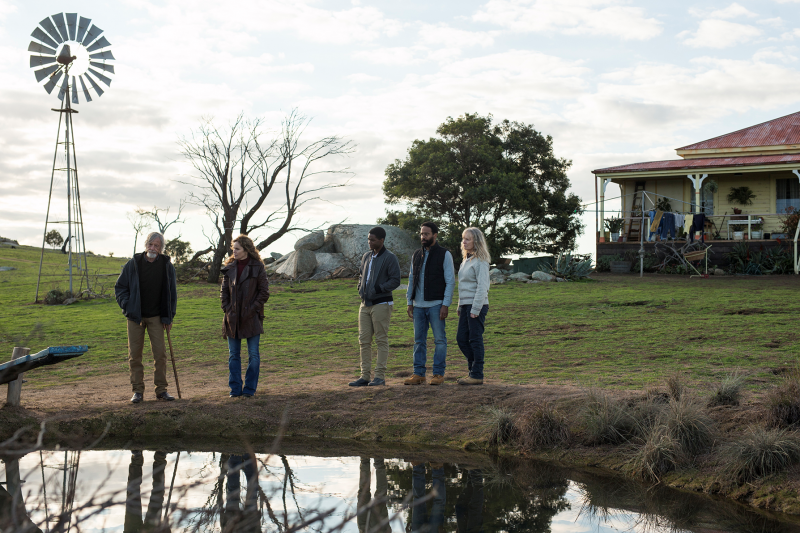 The Leftovers 306 – Laurie (Amy Brennaman) and the entire gang at Grace’s ranch. Image by HBO. Copyright 2017.

Laurie makes her way to Grace’s ranch in Nora’s stolen VW bus. Kevin Garvey Sr. greets her and she hands over Kevin Jr.’s burnt Book of Kevin. It turns outs the younger Kevin has been asked to go on another mission into death and went out to think about it.

Kevin Sr. retells the adventure that led him to Grace’s. Despite her misgivings, Laurie agrees to let their plot unfold if Kevin agrees to it. Unexpectedly, a cop knocks on the front door, which Laurie answers.

Kevin Sr. and Grace resort to knocking out the cop while they tour the grounds. Inside the house, John and Laurie disagree about the flow of information to and from one another. John shows some of the fire he had last season, but Michael pleads for calm.

Kevin Sr. and Laurie load up the cop into the van for Kevin Sr. to dump somewhere far away. John draws Laurie’s attention when the bus pulls away. He wants to reminisce about their first coffee together, but also admits to his belief in Evie’s continued existence. John wants Kevin to pass along the message that “she was loved” if he should meet her on the other side. John explains the real reason behind the partially constructed boat has nothing to do with Kevin Sr.’s flood prediction. He admits if he lets that reason convince him Kevin is wrong, he’ll have to stop believing his own lies. He almost wants an out, but Laurie tells him to see it through.

Grace and Laurie prepare stew together. Grace’s thoughts stray all over and settle on the fact her children were found missing their shoes. She wants Kevin to ask about their shoes. Then, she leaves Laurie alone with the stew. Oops.

Everyone dines together. After Grace excuses herself, Kevin Sr. discusses their respective places as fill-ins for the Last Supper. Kevin Sr. believes Laurie to be doubting Thomas. She disagrees and tells them she’s actually Judas. Then, all the men fall asleep.

Kevin Jr. rides up and starts chatting with Laurie. Kevin admits to killing Jill’s hamster and hating their house together. Laurie tells of her departed pregnancy. Kevin openly tells Laurie about where he goes when he dies and why it doesn’t scare him. She decides to leave and gives Kevin Jill’s lighter. They tell each other goodbye. 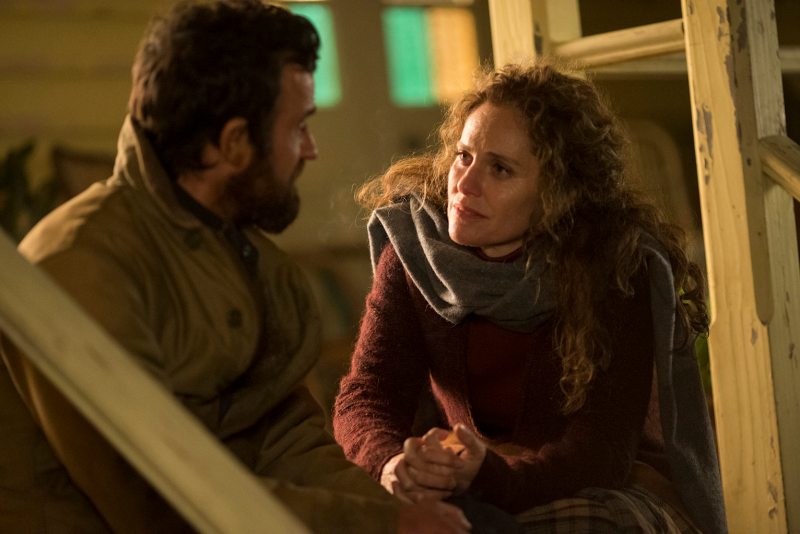 The Leftovers 306 – Kevin (Justin Theroux) and Laurie (Amy Brennaman) tell each other secrets from their failed marriage. Image by HBO. Copyright 2017.

Wearing a wet-suit, Laurie has chartered a boat to take her SCUBA diving. Jill calls to settle a dispute between herself and Tommy. She wants Laurie to identify a videotape from her youth. Laurie knew it. The boat’s captain insists “Now or never”. She chooses “now” and jumps in. Does she plan on coming back?

The song played in the background of Laurie’s suicide attempt is an instrumental version of “Wherever I May Roam” by Metallica. Check out what one savvy Internet user  believes (and what this reviewing team thinks sounds pretty good):

The hero of this song is neither thief, nor any other criminal. He’s a person that leads a missionary life. He has few possessions, loves all people equally and is proud of it. It has to do with christian teaching that says one must love God or ‘goodness’ more than any relative. This way of having little possessions and treating every person like a father or mother is normally hard to understand. Therefore this tramp-like way of life is called ‘off the beaten path’. ‘My body lies but still i roam’ says human spirit is immortal. It also says that human imagination is a very powerful possession that can take you across time and space even when you lie in your bed.

Sound like a pretty good match for a person weighing suicide to us.

The name of this episode holds a few different meanings accepted widely in our society. We hear Laurie mention the first meaning when she and Nora discuss suicide and SCUBA diving. Nora state she holds a certificate in SCUBA diving, fitting he word’s first definition: “having or proved by a certificate”. This isn’t why the episode is named “Certified” though. The name of this episode presents a question regarding the sanity of our characters and Laurie in particular.

The whole episode shows Laurie saying and doing things that upon re-watch, could be interpreted as, well, crazy. Or maybe just -feels- crazy? The end of the episode shows Laurie using Nora’s idea of SCUBA diving for presumably a conveniently explained death. Is she crazy if she apparently commits suicide? Or does she have another motivation.

We really want to see what happens next week because we expect that episode to play out in the “other place” or wherever the hotel resides. We also expect Kevin Jr. to be there, carrying out his mission. Will Laurie be there too? Is THAT why she committed suicide? When Kevin tells her he’s not scared of dying because of how things went before, she replied, “Then I’m not scared either.” At first blush, we thought she meant on Kevin’s behalf. Now we suspect she means for her own mission in purgatory (other place, hotel, etc.). Perhaps as a way to make up for leaving him for the GR?

At Grace’s dinner table, Laurie refutes Kevin Sr.’s assertion that she plays the part of Doubting Thomas within their little Last Supper reenactment. Instead, just as the dog tranquilizers take effect, she tells Kevin Sr. she identifies more with Judas. Most Christians associate Judas with betrayal and Christ’s death. Michael, before zonking out, slips in a little trivia most Christians may not be aware of though: Judas may have killed himself right after betraying Christ.

One question we have is, who is the Christ figure getting betrayed here? Her actions betray Kevin Sr. and his cadre, but we haven’t actually seen her betray Kevin Jr. She clearly commits what Kevin Sr. will consider an act of betrayal by drugging him, but is HE the Christ figure? We doubt we’d have followed Kevin Jr so closely for three seasons for the series payoff to feature Kevin Sr saving the day. Is there an act of betrayal still to come?

Some amount of controversy surrounds the issue of Judas’ death. In the book of Matthew, Judas commits suicide, like Michael said. In Acts, Judas “fell headfirst, and burst asunder in the midst, and all his bowels gushed out”. Other non-biblical accounts state Judas spent his remaining days wandering, suffering, and dying horribly.

“Officer Koala-fart here is gonna drown in the flood tomorrow, along with all the rest of us.” – Kevin Sr.

“Yeah, well, I joined a cult. It’s just one of those things they made you do.” – Laurie on her divorce from Kevin.

“I’m not scared either.” – Laurie after Kevin describes what dying was like for him.

We’re going to the land of the dead. Soon.