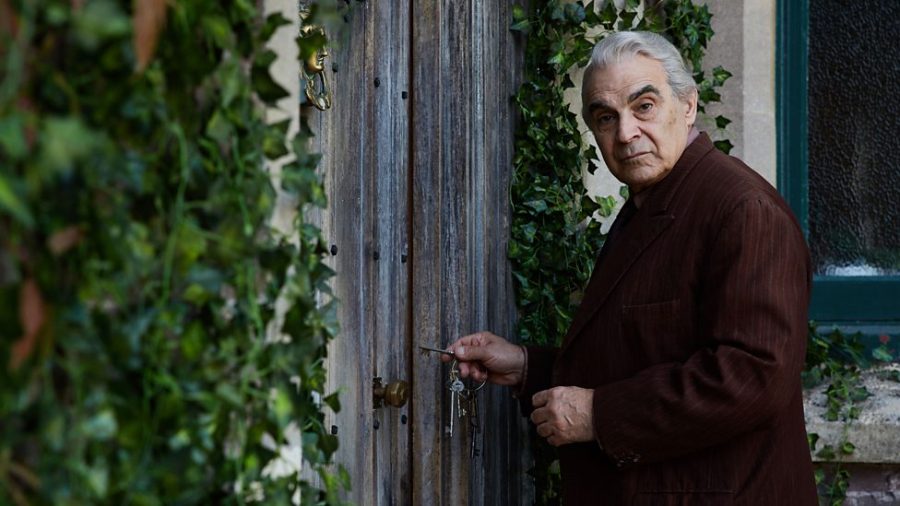 For I am your landlord. You came here, you signed the contract and now…it’s time to pay.

Doctor Who is back at it again this week with what feels like should be a quintessential episode for the show. “Knock Knock” is a satisfying mix of monsters, horror, and humor with a dash of unanswered questions mixed in. Doctor Who hasn’t often played with the haunted house premise, “Hide” from series 7 being the most recent & memorable, but “Knock Knock” had all the makings of a hide-behind-the-couch episode. Tonight’s episode totally had me cringing, but we really were left with a jumble of unanswered questions.

We start off on moving day for Bill, she has decided to go in on a flat with some other students from the university and spread her wings a bit. Something that all young adults quickly learn though, it’s hard finding a reasonable flat when you’re the one paying the rent. This group of students seems to find the steal of the century, a deal that can’t be passed up, a grand old manor house (tower sorta included) and within their budget! Like most “too good to be true” deals are, we will soon learn that there is a catch. (Side note, we learn a genius life-hack for moving in this episode: pile all you boxes in the corner and have the TARDIS materialize around them.) Thankful for the help moving her stuff, Bill isn’t too keen on having The Doctor hang about afterwards and she seems overly uncomfortable when he tries to stick around. 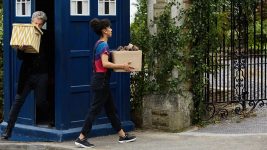 The stately manor comes with the creepiest landlord ever and right away Whovians can tell that there is something peculiar about the older gentleman who definitely isn’t everything that he appears to be, but Bill and her friends don’t quite manage to notice it with the wonderful deal they’ve just received on the house. It’s easy to spot that he has some kind of agenda and for an older guy, he is a complete ninja and out of no where just seems to appear in the house. Any time he and The Doctor share the screen it is absolutely delightful, I almost wish we had seen more of it. We all know there is something secret about the house that the landlord must be in on, and it isn’t long before Bill and her friends start getting picked off one by one, in a classic horror style. Luckily for them, The Doctor, pretending to be Bill’s grandfather (insert fan theories here) hasn’t strayed far and is there to help poke around. Bill, trying to get The Doctor to leave asks if he ever sleeps and here is where The Doctor makes his first mention of regeneration to Bill. Of course he plays it off like nothing and avoids her questioning look, but could this mean we will see The Doctor regenerate earlier rather than later? (I’m still not ready to process that Peter Capaldi will be gone after Series 10 so I’m not going to give much time worrying about that.) 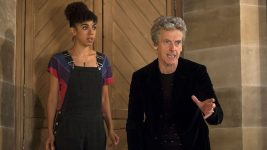 “Knock Knock” gives us plenty of good scares as the house starts to lock itself up and we begin the real investigation. Unfortunately, none of the friends have ever watched a horror movie, as most of them are split into smaller groups, which is never a good idea in an old scary house. We see one flat mate half eaten by the wooden wall in his room, one flat mate get killed by the tree outside, and another flat mate screaming as we see him be eaten alive by these nasty alien bugs that seem to be ALL over the house. We’re talking an infestation level that possibly even the Dalek’s wouldn’t be able to exterminate. The old wooden manor starts creaking in odd and mysterious ways and The Doctor’s investigation takes him to the basement with one of Bill’s new friends, this is where they discover the personal effects of the previous 6 tenants who shared the house 20 years before. And then 20 years previous to that the boxes from another 6 tenants…is the house feeding?

Here is where the story get’s a little less “horror movie” and a somewhat logical explanation starts to be introduced. The landlord is aware of the house and it’s need to consume, and that he is exempt because his daughter, locked away in the tower, is the one who needs to feed. When The Doctor explains that he might be able to help the landlord’s daughter from whatever is controlling her, we are led to the tower to meet the interesting (and still jump worthy) Eliza. 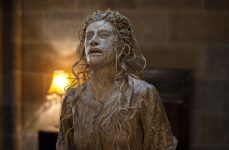 The landlord explains that 70 years ago, Eliza was sick in bed when he brought in a few special “rocks” from the garden to cheer her up. The next morning when he returned to her she was revived but the wooden transformation had already begun. The rocks brought in from the garden were actually alien bugs in hiding, they respond to high pitched tones and Eliza’s music box had awoken them. Though Eliza is now a weird wooden lady, the bugs that transformed her are alien in nature and the good old landlord is just a regular ole’ human, something isn’t adding up here and Bill catches it. With some provoking from The Doctor, the landlord admits that Eliza is actually his mother and he’s been there protecting her, unable to move on, all this time. Since his childhood he has been doing whatever necessary to keep his mother with him, even in this broken form, whatever the cost and for however long, which makes him less a creepy old heartless man and tugs at our own heartstrings a bit. When Eliza realizes that her condition is the result of so many deaths, she scolds her son for his actions and begs him to leave her pass on while he finally enjoys the world and his live. As he is unable to let go, she then calls to the alien creatures through the house and has them take her & her son instead, causing the entire manor to end up disappearing on itself. Bill’s new friends re-materialize as the bugs take Eliza and everyone manages to make it out of the house, though they lose all their stuff not to mention the security deposit. (Let’s say this together and loudly: JUST this ONCE Bill, everybody lives!) Though with that everybody lives mentality, the overall resolution of “Knock Knock” does leave us with more questions than when we started. How did the bug aliens arrive in their garden, why did they turn Eliza to wood, how does feeding the wooden house humans help keep Eliza alive, how did the the landlord even realize that the house needed to eat humans to keep his mother alive?

We end the episode with The Doctor giving Nardole the evening off while he watches over the vault, which again just seems to open up even more questions for us. We learn that whoever is in the vault has been given a piano to play, that The Doctor is also a prisoner on this planet for the time being, and that he realizes they miss being out. He is also quite keen to share dinner with the unknown prisoner, showing us that he has some kind of affection for them and we learn that whoever is behind that door would find young adults getting eaten by a house particularly entertaining. I have two separate theories on who might be in the vault, and would love to hear your thoughts in the comments!