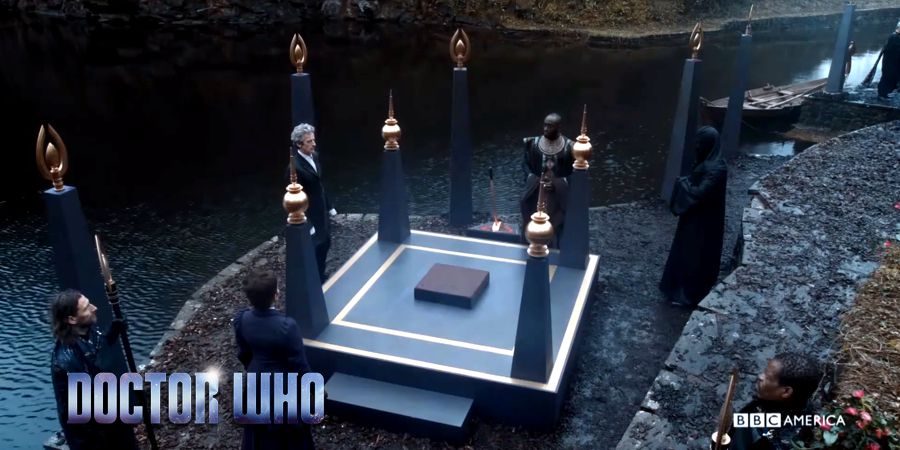 The Doctor has been called to the Vatican by none other than the Pope himself. It seems the central issue is a book known as “The Veritas” and it’s a killer. You see, everyone who reads it takes their own life after they’ve finished the book. I guess you could say once you’re done with “The Veritas” it’s done with you. But exactly how and why is it causing readers to commit suicide? That’s part of the mystery we’ll learn about when Extremis airs.

In this second preview clip, the Doctor is in the company of someone he’d probably rather not see: Missy. Fans, on the other hand, will likely be overjoyed to see Michelle Gomez tear it up as Missy. She’s always been fun on-screen and there’s no reason to believe this time is going to be any different.

Of all the incarnations of the Master, I have to say Missy is by far my favorite. She portrays the Doctor’s nemesis in a much more playful manner. It’s a nice change from the overtly megalomaniacal male regenerations of the past. Her run as the Master/Missy show us more clearly that these two are actually friends who just happen to have very different agendas.

Check out the preview because I think that friendship is about to take an ugly turn.

In the Haereticum – the Vatican’s secret library of blasphemy – there is an ancient book known only as The Veritas. Throughout history, anyone who has ever read it has immediately taken their own life. Now a new translation is online, and the danger is spreading. The Vatican appeals to the Doctor. Will he read The Veritas? But can even the Doctor survive the ultimate truth?

Doctor Who airs Saturdays at 9/8c on BBC America