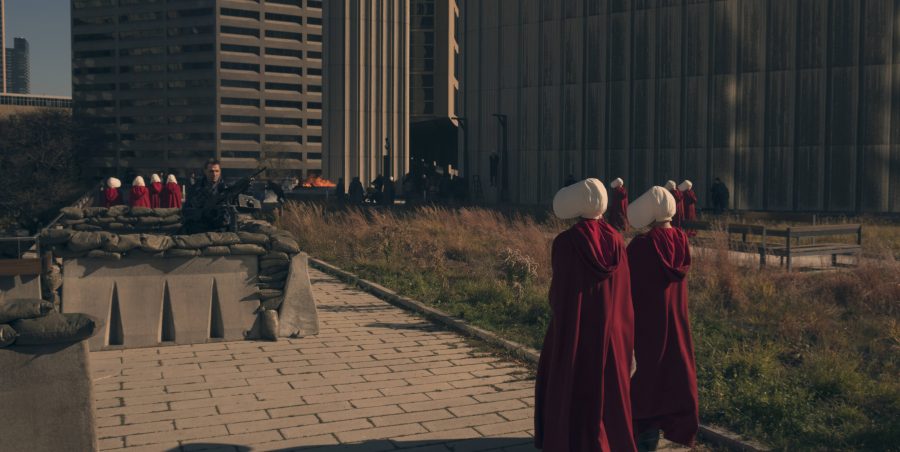 First, let’s all give a big cheer of “Under His Eye!” Hulu announced today that they have renewed Handmaid’s Tale for a second season! It will be fascinating to see where they can go with this small book. So far, I’m really impressed with the additions and extrapolations, and I’m enjoying – and am horrified by – the view of the world we didn’t get to see in the novel. As Offred says in episode 3,

Now I’m awake to the world. I was asleep before. That’s how we let it happen. When they slaughtered Congress, we didn’t wake up. When they blamed terrorists and suspended the Constitution, we didn’t wake up then either. They said it would be temporary. Nothing changes instantaneously. In a gradually heating bathtub, you’d be boiled to death before you knew it.

I apologize for doing this, writing one post to cover three episodes. Hulu hadn’t warned us in time that they’d release episodes 1-3 all at once – I hope you watched them all! And unfortunately, I was out of town all week and couldn’t get a write-up done for episodes 2 and 3. And today, of course, episode 4 came out! So let’s talk about where we are so far, and how we got there.

While Gilead has a definite arch-conservative religious base, does it really matter? Here’s the huge generalization: underneath it all, men really only want two things, power and sex. And women really only want family. All those things encompass so much, and are very interconnected, and yes, I know it doesn’t apply to everyone (although I suspect it applies to more people than would actually admit it). But THIS is how we get to Gilead. Religion is the overlay, the weapon, the excuse. The real reason is that men want power. How they get it isn’t so important as that they DO get it. And power on top of the drive for sex leads men to want to dominate women (which is showing its ugly side in our current society with what’s being called “rape culture” – rape isn’t about sex, it’s about power). And for the majority of women, the biological need to have children and a stable family life is the driving need, and they (we) will subsume much of our other drives and needs to have it.

The men who are the best at attaining power, historically, are incredibly charismatic, able to convince large groups of followers to accept them as leaders. Look at any of society’s demigods – able to convince otherwise intelligent people to do things that, down deep, they must realize are wrong. But the promise of trickle-down power, the implied bonus of being able to dominate women with society’s approval and encouragement, is irresistible to large groups of men. 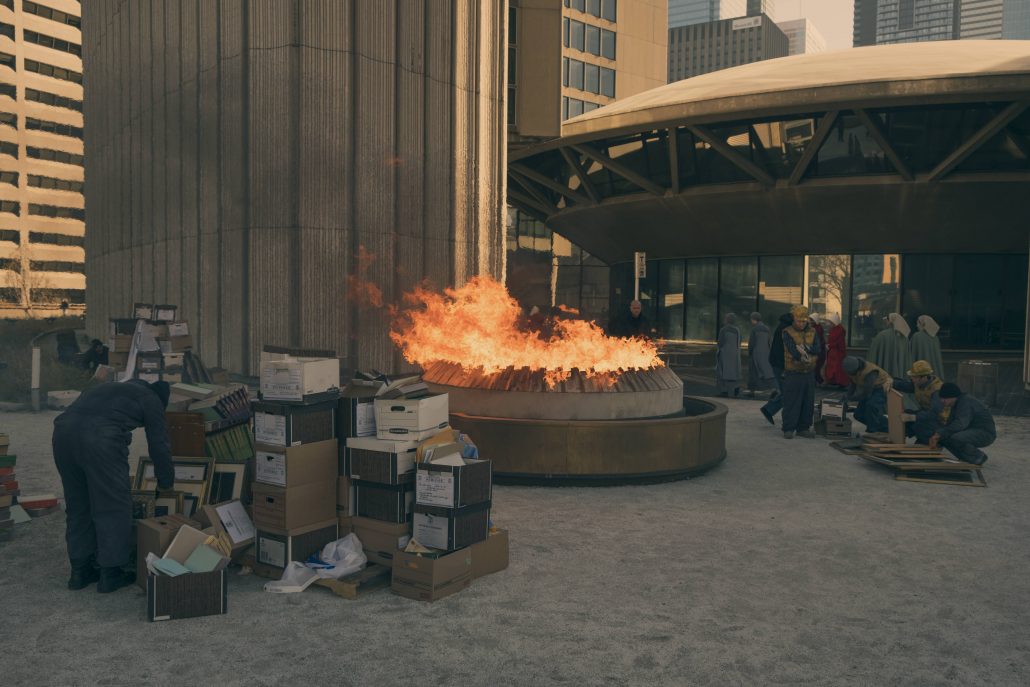 Mix that with a falling fertility rate, and it’s easy to also convince the women that if this group of men, with this belief of a religious destiny and God-ordained society, can take power and institute certain new rules, they can find a way to provide the barren women with the children they’ve been denied. The men don’t really care so much that there are fewer babies – I suspect their vision doesn’t really extend so far that it makes much of a difference, at least not yet; but the women sure do. And this drive to have children and build a family – which is absolutely necessary to the future of humankind, but perhaps they’re not thinking that far yet either – pushes them  to agree to these arrangements, “for their own good,” even as they inwardly realize that this is all wrong. At one point, in a rare moment of solidarity, Mrs. Waterford says to Offred, “What you do – what we do together is so terrible … It’s terribly hard and we must remain strong.”

So it’s only those who are forced into a loss situation – loss of their existing children, loss of their current families, loss of their freedom – who object. They have nothing to gain, and still more to lose. Those that reach the “nothing more to lose” point are the ones that find those sharp edges and the ways out. But there are always more people to control, so one individual is no loss. Especially when that individual threatens the power base somehow – doctors with their superior education; gay men, who won’t be swayed by the offer of female domination; gay women, who will be harder to control through sex; anyone who believes in a different religious script, and might make waves and objections. And so they have to go. 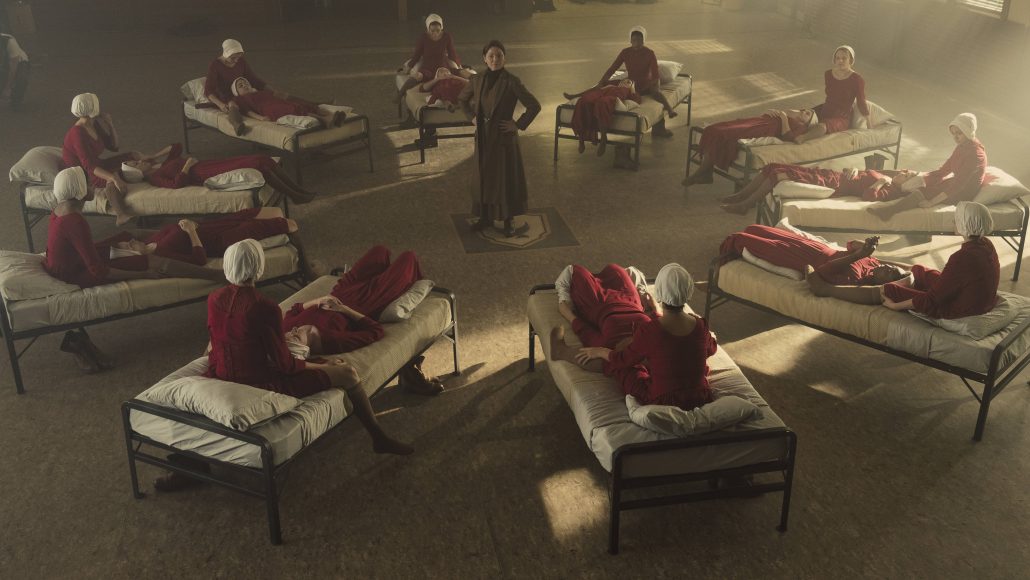 Elisabeth Moss is amazing in this series. Her face is so expressive – emotions completely hidden when necessary, but exploding across the screen when allowed. Her journey across these three episodes is terrific. Offred’s horror at learning what they’ll actually be doing on their postings; her sympathy for Jeanine, and her sadness at knowing that Jeanine is slipping even farther info madness; her slight teasing of Nick, and reluctantly accepting a tiny bit of the potential friendship he offers. These scenes, and many others, all allowed Moss the opportunity to show us in great detail a woman who is horrified, angry, and, at the end of episode 4, somewhat accepting of her impossible situation. 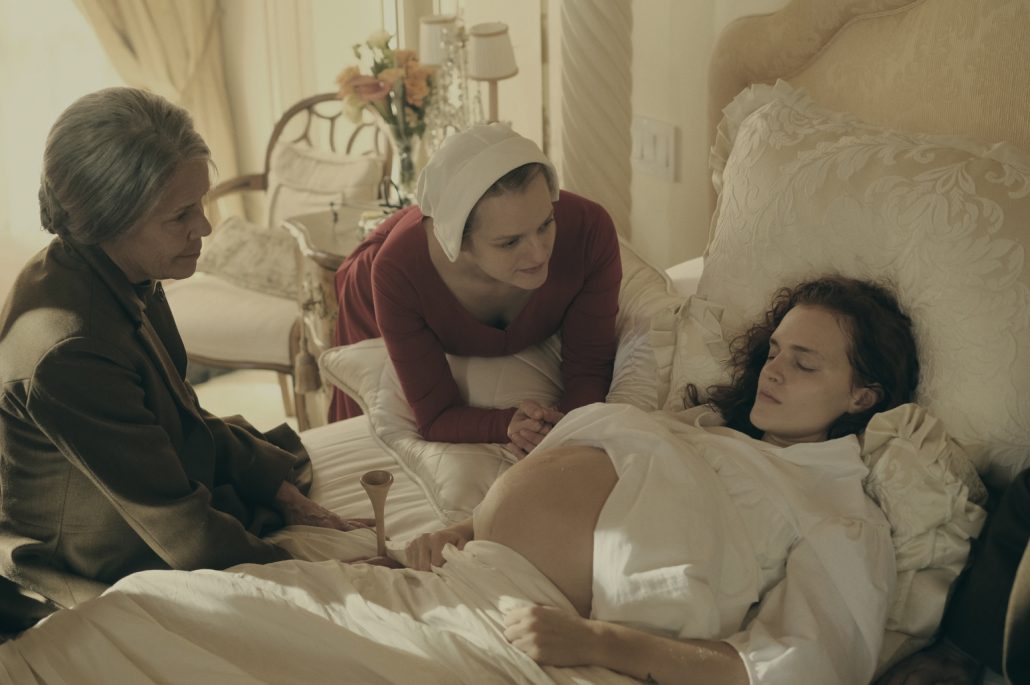 She’s looking for anything she can cling to that will keep her both alive and sane. When she finds the scratched words in her closet – “Nolite Te Bastardes Carborundorum” – and realizes that they could have been left there by her Handmaid predecessor, it at first makes her feel hopeless – the bastards really have ground her down at this point. But after her stealthy Scrabble games with the Commander – and who saw that coming? – she understands that he’s no happier with the situation than she is. “I suppose she found her life…unbearable,” he tells her when she asks about the previous Handmaid. “And you want my life to be bearable,” she recognizes. “I would prefer it,” he concurs.

She does have some power here, she understands – she thinks she had some responsibility for the Commander not being able to get it up for the Ceremony, because he “needs that connection,” and she denied it to him. But she can find ways to make her life here manageable, if never free or controllable. Offred has had her breakdown in the car on the way back from the doctor’s office (where he offered to “help” her conceive – wonder how many little doctors are running around?), but at the end of episode 4, she’s regained some equilibrium, thanks to the previous Offred. “There was an Offred before me. She helped me find my way out. She’s dead. She’s alive. She’s me. We are Handmaids. Nolite Te Corborundorum, bitches.” 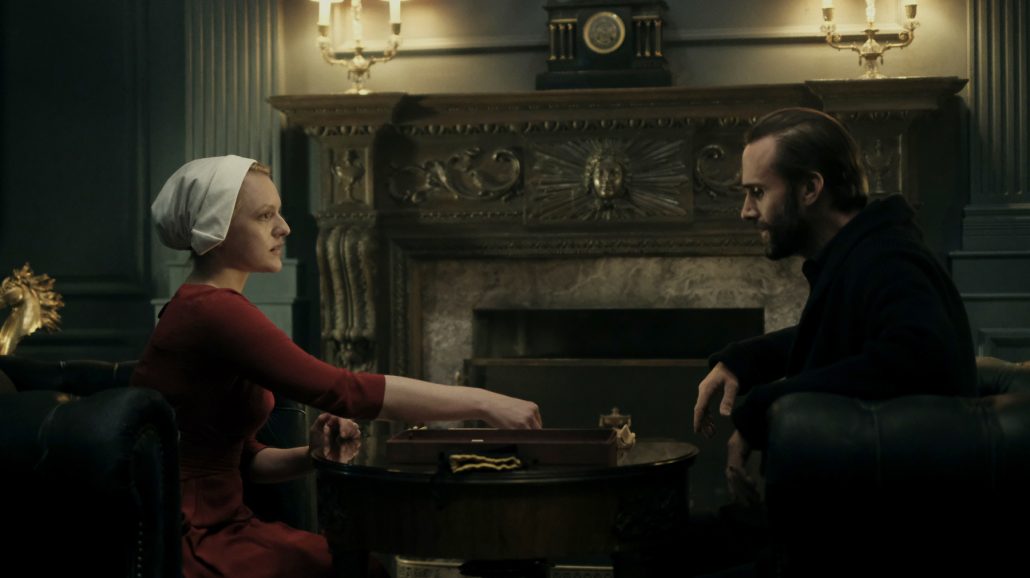 The Scrabble scenes have had many fascinating little tidbits. The words that have been chosen for us to see all have double meanings for the game participants and for the viewers. “Larynx” – there is no free speech. “Judges” – constantly. “Sylph” – are the Handmaids seen as temptresses by either the Wives or the Commanders? And the books – in a world where women are forbidden to read or write, to those who are used to having that freedom, books represent so much of their past lives. They’re both temptation and danger.

But she has to be careful. She’s seen what’s happened to other Handmaids – particularly Jeanine. And she’s felt the punishment herself, having her feet scourged to bleeding wrecks following her escape attempt with Moira (Samira Wiley, too, has been truly excellent, and I’m hoping we see more of her journey through this world). 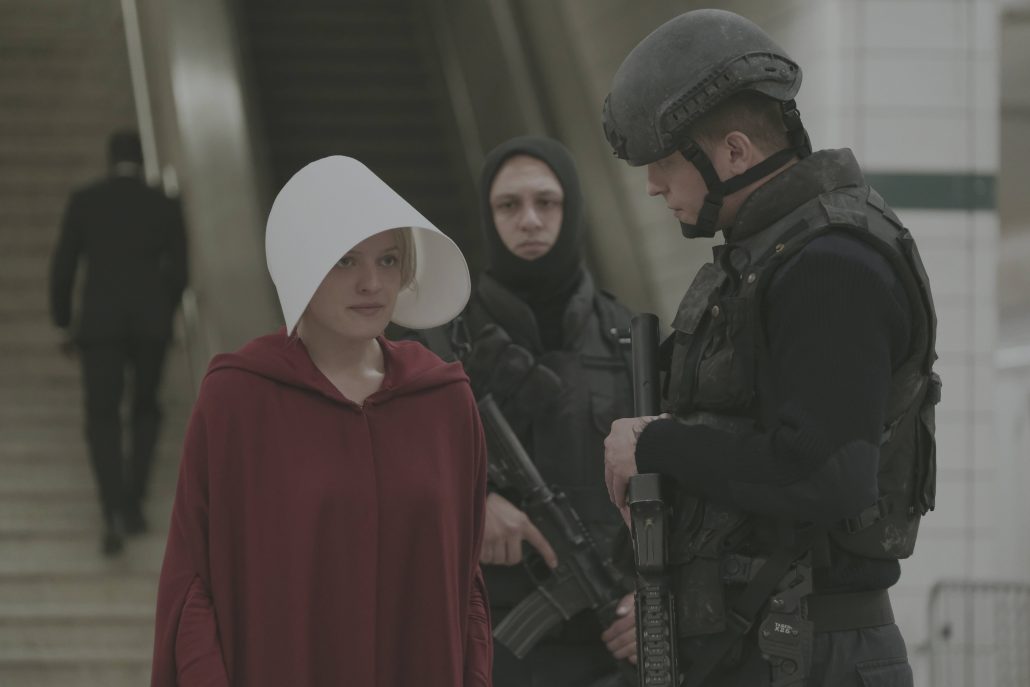 She knows Ofglen – Emily, we learn – is gone, but has no idea of the horror she’s been put through (genital mutilation, if you didn’t understand – after her affair with the Martha, who was hanged for it). Aunt Lydia, who truly appears to have accepted this whole horrifying situation, tells her, “I know this is a shock of course, but things will be so much easier for you now. You will not want what you cannot have.” Both Alexis Bledel, as Ofglen, and Ann Dowd as Aunt Lydia, have been excellent and convincing. It won’t surprise me, at least from these first four episodes, to see several Emmy nominations coming out of this show. 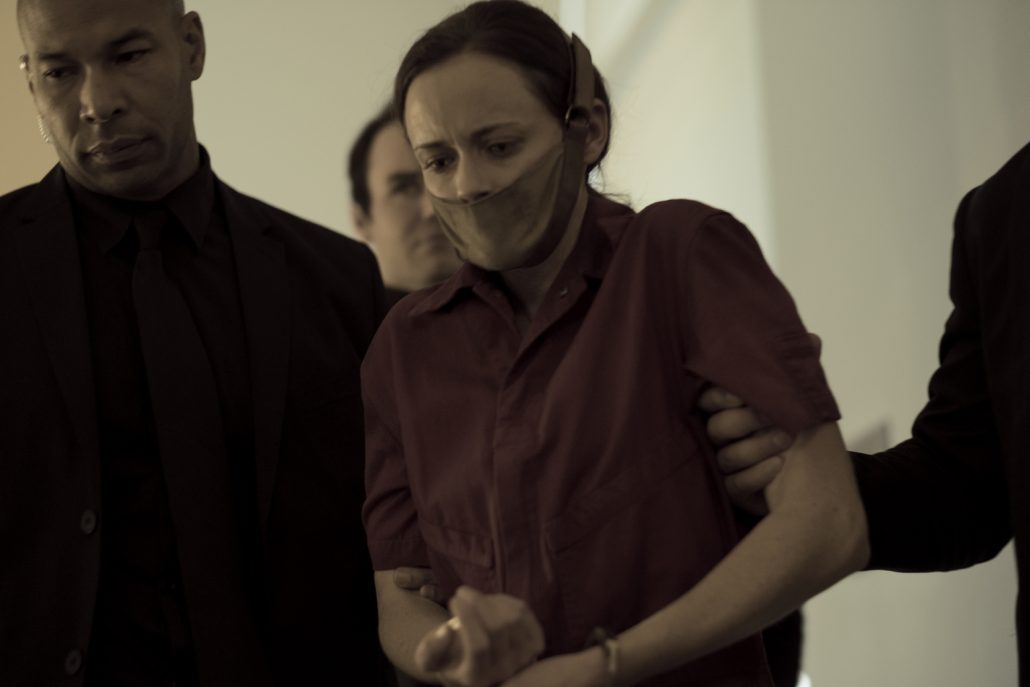 One “lowlight” for me, though, was the interrogation scene in episode 3. The actor playing the interrogator was wooden and annoying, completely taking me out of the scene. As scary as the cattle-prod wielding Lydia was, the man with her totally threw the scene. So far, it’s been the only misstep that the production has taken. 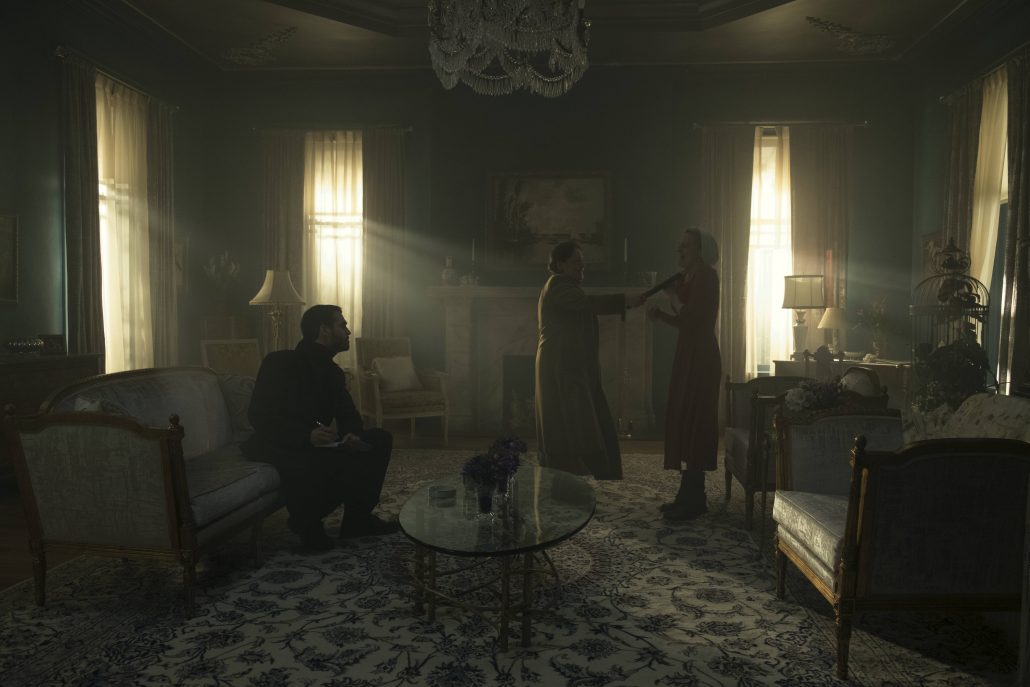 I wanted to mention one very lovely bit of visual effect, and I’m sure this has to be planned – during the episode 4 Ceremony scene, when the Commander can’t perform, there’s an interesting shot of Serena Joy sitting against the headboard of her bed. And the headboard behind her looks like angel wings. She certainly isn’t an angel, but she doesn’t seem as vapid as the other Commanders’ wives we saw during the birth scene. I just thought this was a nice touch.

Nick (Max Minghella) is an interesting character. He seems to be falling for Offred, who of course is forbidden to him. She lets her dress linger around her thigh when she notices he’s looking. He tries to warn her about the interrogator in the home, and tells her afterwards, when he brings her ice, that he should have just kept driving and taken her away. He gets uncomfortably close to her in her small room. Is Offred attracted to him? Or does she see him as both possibly spying on her and a potential rescuer, or at least another way to make her life bearable? Either way, Nick could be very dangerous to her. And Offred is a smart woman – she knows that any encounter with Nick is a risk. 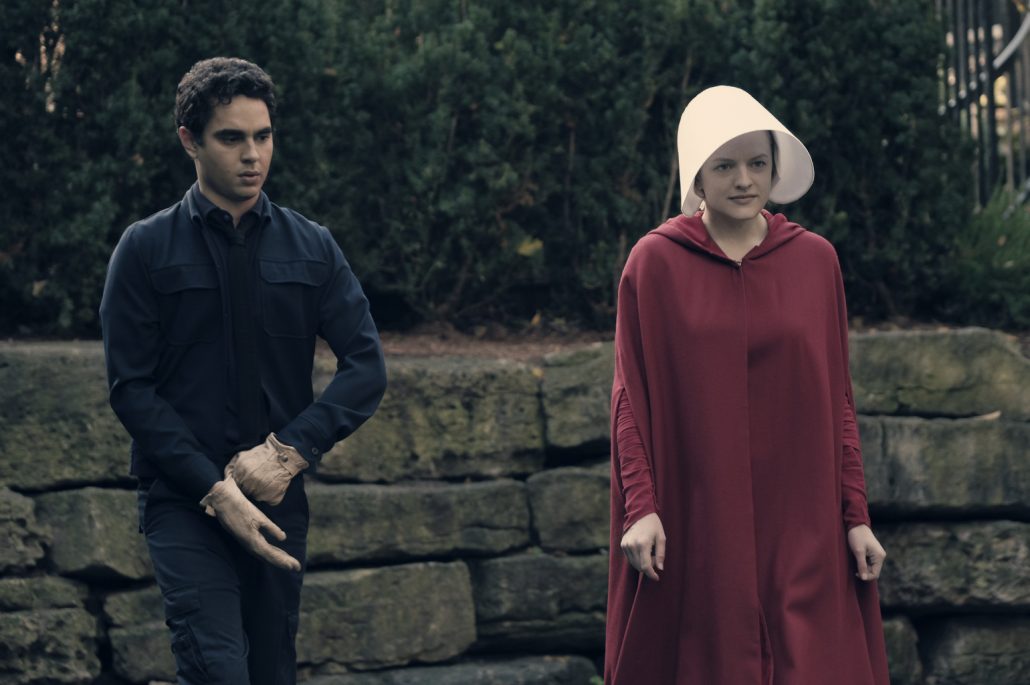 Have you been enjoying the wide range of excellent music in this show? Spotify offers a playlist that’s available for free. You can find that here.

Enjoy these striking character posters from Hulu (scroll through to see all nine):

Join us on Facebook to discuss the show: The Handmaid’s Tale on Hulu – Gilead Online!