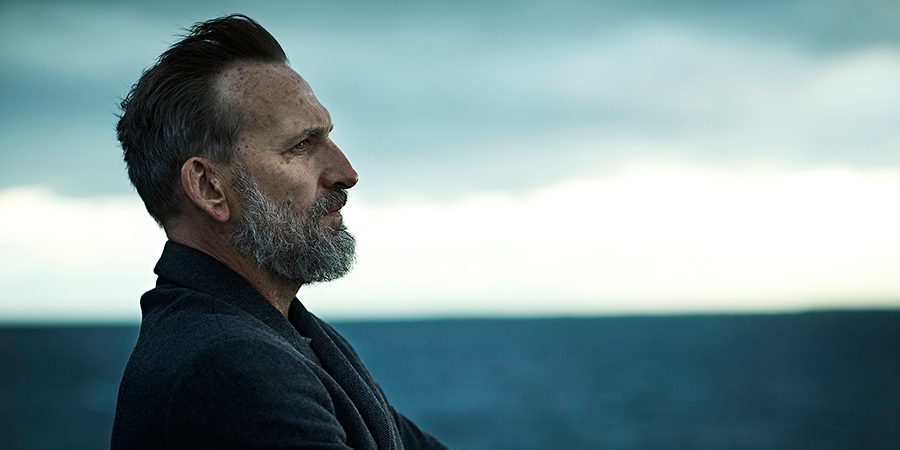 The episode opens aboard a French nuclear submarine where one of the ship’s crew makes a naked dash through the ship, into the room capable of launching the nukes. Thanks to the man’s towering height and overly dextrous toes, he turns the opposing keys simultaneously and enables the launch system. He fires off a nuke at, what we learn later to be, an uninhabited island in the South Pacific. We believe this must be the major event (explosion) alluded to at the end of last week’s episode.

Back in Texas, Matt uses a casserole and $20,000 (also the amount Matt left for Kevin Sr. in the peanut butter jar in his backyard -and- the amount Nora needs for the Departure Microwave) to convince a local pilot to use a relief-supply plane previously destined for El Salvador, to fly him, John and, Michael to Australia to bring Kevin back to Miracle. While gathering at the airport, Matt starts spitting fire the second he sees Laurie has joined John in their mission. Disappointed his trip of “three wise men” now includes a woman, Matt gets a couple great zingers (mentioning that whistle? No holds barred, man!) into the argument before John defends his wife.

Thanks to the French nuke, Matt’s rescue flight diverts to Tasmania and he has to arrange some way to get to Australia. A private party, celebrating their affinity for virile geriatric Lion named Frasier, has rented the only ferry available. Even though the lioness / hostess guarantees the nature of the cruise’s activities will offend Matt and his friends, Matt pushes on and delivers a very un-Matt-like joke to gain entry. 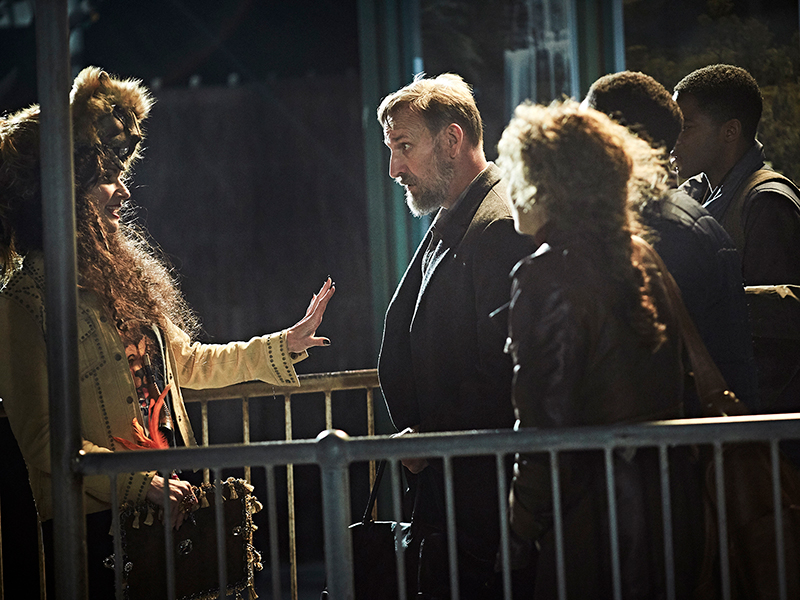 The Leftovers 305 – Matt (Chris Eccleston) negotiates with the head Lioness to get his merry band on board their sinful boat. Image by HBO. Copyright 2017.

On board, the show’s creators accept the gauntlet for wildest on-screen orgy thrown down earlier this year by Westworld with gusto. For the most part, Matt remains so focused on his mission to find Kevin and return him to Miracle that he hardly seems to notice the modern day Sodom and Gomorrah playing out around him. The one figure Matt does take issue with he finds reading a Louis L’Amour book above decks. This man in the red cap turns out to be David Burton, the man we’ve been waiting two years to learn more about. Matt’s trouble with Mr. Burton originates with his identifying himself as big “G” God and handing out FAQ cards rather than talking to people.

Matt witnesses God/Burton throw another man from the ship and when the orgiastic revelers won’t take notice of his call for help, he jumps in after the man. The ship’s crew pulls Matt out of the water and the ship’s captain gives Matt and John the details surrounding the man calling himself God. When Matt finds few believers in his man thrown overboard story and fewer takers in his plot to get God/Burton to confess, he takes matters into his own hands. Thus, a conversation with a man bound to a wheelchair in the presence of Frasier’s progeny ensues. Matt’s commitment to his rescue plan is finally shaken when Burton mocks his faith and dedication with a derisive, “Ta-da!” and a snap (We thought God/Burton had something more physically sinister in store for Matt.).

The captain finds Matt and admits to learning a man was found at sea earlier that morning by a fishing boat. When asked if Matt has any pressing business in Melbourne, he says, “No.” Matt, wisely heeding an earlier acquired warning to stay on board when the ship docked, informs his travelling companions that he is dying. Then, the Lion bursts from his cage, chases down a fleeing God/Burton, and eats him. 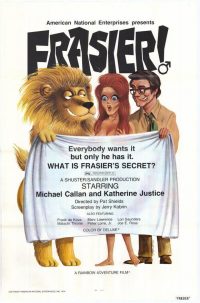 Frasier the Sensuous Lion – In 1973, Pat Shield directed a movie about Frasier and his fabled exploits. If there are any other connections between this episode and this movie besides the obvious, please let us know what we missed! In 1974, perhaps inspired by the fine aforementioned film, jazz singer Sarah Vaughan released a song by the same name. This episode used the song for its closing credits.

Metaphorical Mini-story – This episode’s sub-plot revolving around the man thrown overboard can be viewed as a metaphor of Matt’s mission to rescue Kevin. Re-watch and consider this… Kevin needs rescue and no one hears Matt’s call to rescue him (and those who do have waning belief). On the lower deck of the ship, Matt looks up at the man claiming to be God and says, “I see you! I see what you are doing,” as  Mr. Red hat throws a man overboard. Frantic, he sacrifices his own life and jumps overboard to try and rescue him. Recall Matt sacrificing his life with his family in order to follow his belief in the book of Kevin by allowing Mary to leave with their young son. He quoted Jesus, “If you come to me but will not leave your family,you cannot be my follower,”.

Here, he asks his “wise men” to help “compel him to confess” but his pleas fall on deaf ears; he finally realizes he will have to do this alone. We feel strongly that this moment will repeat in the future, leaving Matt to go it alone on his journey to save Kevin. His desperate and futile night trying to get anyone to help him find the true identity of God/Burton’s victim and justice for the crime culminates in a last-ditch effort to get answers from “God”. The delivery of this conversation from Christopher Eccelston starts with him doing his best Nicholson with an axe to him asking in a childlike voice if “God” will save him again. Mocked for his beliefs and left thoroughly humiliated, Matt is left to ponder his life on the upper-decks, looking below.

At the break of dawn, the Captain of the ship confirms that indeed a body had been found and the police will arrest Burton/God at the docks, but the damage is done. Matt has accepted his fate as a dying man, show gratitude for his friend in their support of his journey but their is no satisfaction for Matt that everyone finally believes him. It seems to have been less about the final outcome and more about being believed along the way.

Bill Camp returns, this time as David Burton. You might remember him as the bridge-man in International Assassin and the karaoke DJ in I Live Here Now. What does his presence here mean? Since we’ve seen him on both planes, mortal and otherwise, we’re tempted to believe he IS immortal. Timeline-wise, the reports of Burton’s emergence from the cave happened before International Assassin though (Who Needs a Hug)… We discourage believing in coincidences on a Lindelof show, so what can we make of this being “David Burton”? Now, we really want to know what he whispered to Kevin on the bridge… 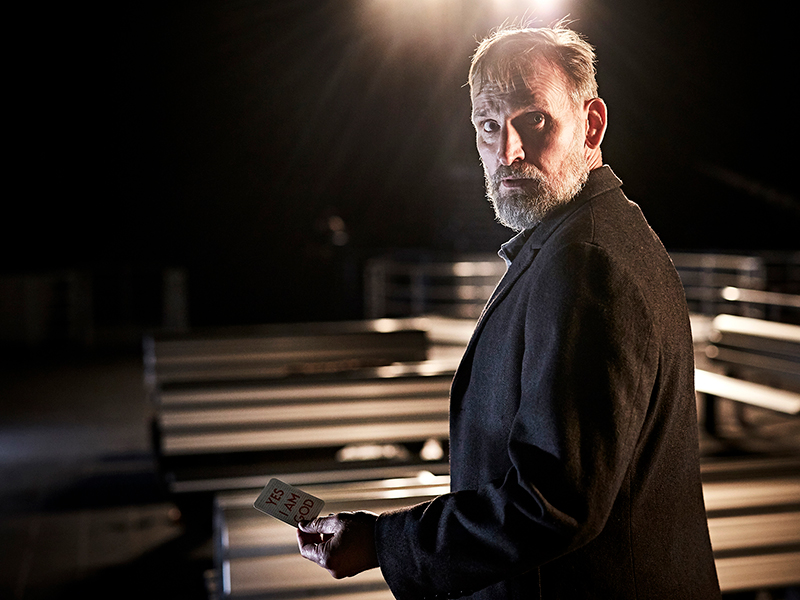 The Leftovers 305 – Matt (Chris Eccleston) doesn’t approach blasphemy with any sense of humor at all. Image by HBO. Copyright 2017.

While on the plane, Matt reads his bible, specifically a passage related to Daniel in the lion’s den. Foreshadowing the presence of a lion in the episode, this passage also deals with the issue of faith. In Daniel’s story, local jackasses conspire against the publicly pious Daniel by enacting a law requiring all the king’s subjects to worship only the king for a month. When he declines by insisting he must worship God before any other, the King must enforce the law and throws Daniel to the lions. Despite the jackasses best intentions to rid themselves of Daniel, the lions refuse to play along. The King releases Daniel after he spends a day with the lions and doesn’t get eaten. Daniel’s faithfulness to God is given credit for his salvation.

In tonight’s episode, Matt’s faith gets adjusted, but we still have to wait and see to what degree. Will he still pursue Kevin with his messianic beliefs? Or can he focus on Kevin’s safety and mental health (like the rest of the team) while keeping his faith? Given the outcome of Daniel’s story, we’re pretty sure David Burton, who had just taken a dump all over Matt’s sense of faith, was not actually God. After all, he didn’t pass the lion test.

The Leftovers borrows symbols and history from faiths past and present, spanning the globe. Matt, however, practices his faith as an Episcopal priest. Thus, when we see lions in a Matt-centric episode, we think of lion iconography in the Christian faith. Here are a couple:

Christ as Lion – Reference to the Lion of the Tribe of Judah is widely considered to symbolize Jesus among Christians. (Revelation 5:5)

Saint Mark as Lion – Christians often symbolize Mark the Evangelist with a lion, a figure representing courage and monarchy. Like Daniel, Christians believe Mark survived being thrown to the lions.

Matt’s willingness to give things up paints him as a potential martyr. He gave up Mary and Noah for his beliefs. Tonight, he jumped overboard to try and save a man’s life. We will try and at least look surprised when Matt sacrifices himself in some way for Kevin before the finale. 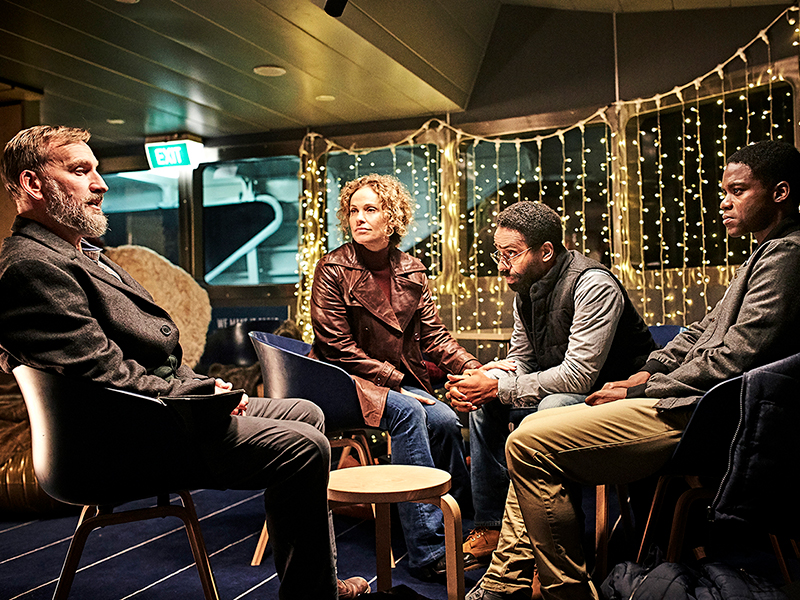 The Leftovers 305 – Matt (Chris Eccleston), his wise men, and Laurie (Amy Brennaman) chilling on a boat with a Lion on it. Image by HBO. Copyright 2017.

“Did you bring your whistle, Laurie? Cause it sounds like you need to blow off a little…” – Matt Jamison 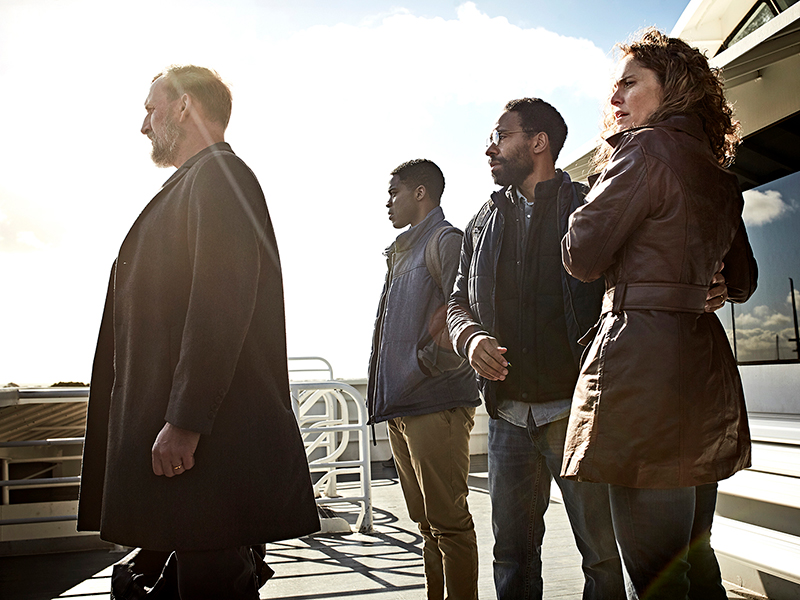 The Leftovers 305 – Matt (Chris Eccleston) and friends on deck, away from the lion-y mayhem below. Image by HBO. Copyright 2017.

Matt and the gang will find Nora before they find Kevin. (almost a gimme)