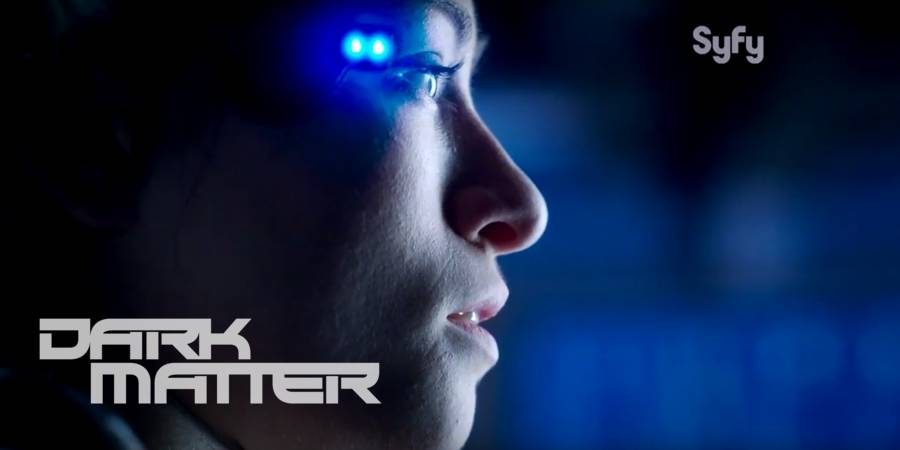 At the time of this writing, we are almost exactly one week away from Dark Matter‘s third season premiere. I don’t know about you, but I’m experiencing some serious time dilation over here. It’s like the premiere is a black hole; the closer I get to it the slower time moves. It reminds me of when I was a kid in school and summer break was approaching. Time. Just. Slogs.

One temporary workaround is to get a taste of what’s beyond season three’s event horizon. The best way to do that is to visit Joseph Mallozzi’s blog every day for updates. The next best way is to watch any and all trailers, sneak peeks, newscasts, teasers, telegrams, candygrams, Instagrams. Basically all the damned grams.

While I don’t have any grams, other than them crackers that spell it kinda funny, I do have treats for you. Below is a new trailer from Syfy Latin America that’s so fresh the Transfer Transit pod is still warm. It covers some footage we’ve seen already, but it tosses in some new stuff as well. It’s dubbed in Spanish, but you don’t need to understand what’s being said to understand what’s going on. So, if your range of languages does not include that particular one, don’t worry, you’ll do fine.

Okay, take a moment to calm down before you proceed. We don’t want you blowing a fuse like the Raza did way back in episode three. I don’t know about the others, but I’m not going EVA to fix your brain and I’m fresh out of helpful androids. Drink a glass of water (or whisky), take a walk, do some yoga, break a plate or two – whatever calms your nerves.

Better now? Good, because here’s the synopses for episodes 301 “Being Better Is So Much Harder” and 302 “It Doesn’t Have To Be Like This” which will air back-to-back. It’s gonna be good! Fair warning: There are SPOILERS ahead.

“Being Better Is So Much Harder”
In the season two finale the EOS 7 space station is destroyed while TWO, THREE, FIVE, and SIX are still onboard.  TWO and SIX escape the blast in the Marauder, but the shuttle is damaged in the blast, leaving them floating dead in space. THREE, who was pulled into an escape pod by Lt. Anders, is now under arrest on a nearby abandoned planet. FIVE and Truffault, meanwhile, find themselves on a Volkov-Rusi destroyer targeted by their corporate rivals.

“It Doesn’t Have To Be Like This”
Now back on the Raza, the crew turns their attention to Ryo Ishida and the stolen Blink Drive. They track down the location of Ishida’s secret research station, but something goes wrong when TWO, THREE, and SIX access.  The facility is transported to a region of null space where the rules of physics no longer apply.  Back on the Raza, while the Android attempts to locate their missing friends, FIVE experiences flashbacks to her life before the mind wipe.

Who’s ready to jump back into space? Yeah, that’s what I thought. Let’s go!