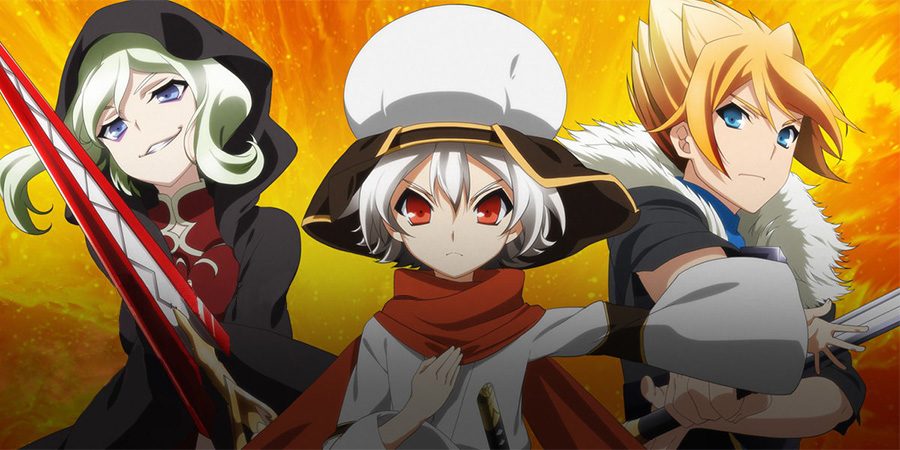 Chaos Dragon tells a story about a land where godlike dragons reign and interfere with their human agents’ political maneuvers. Tough choices get made, people die, and a prince takes his rightful place as his people’s hero in this enjoyable adventure.

Two countries battle over an island named Nil Kamui: Kouran and D’Natia. As the aggressor, Kouran has moved in, killed the kind and sent Ibuki into exile. D’Natia’s has settled in parts of Nil Kamui, but only commits to protecting their own. When stuff like this happens, the island’s deity, the Red Dragon, is supposed to step in and repel the bad guys. Instead, Red Dragon went nuts and left his people defenseless.

Ibuki and his friends get swept into a revolution and in turn, a quest to find the Red Dragon. Thanks to an encounter with a special artifact called the Dragon’s Eye, Ibuki can commune with the Red Dragon from afar. Unfortunately, in order to access the dragon’s power he must exchange the life of a loved one. This plot point adds a twist, but also increases the number of “red-shirts” in Ibuki’s entourage.

New allies emerge, old friends die and Ibuki eventually makes his way across Nil Kamui and all the warring elements, both human and dragon, meet in a battle royale. I’m not going to spoil the ending, but the ending won’t surprise you too much.

Does this story break new ground and leave the viewer breathless after an unending series of narrative surprises? Not exactly. I think the series’ writers would agree with that assessment. However, Chaos Dragon offers enough little twists and turns throughout to make it worthwhile. Several characters leave a lasting impression well after viewing, even if the story gets a little hazy.

The production combines hand drawn techniques with computer animation whenever the dragons appear. You can easily identify the computer animated portions from the hand-drawn, but they have done a pretty good job combining the two. The source material derives from a role-playing game fiction project developed by five notable anime character designers.

Ibuki: Prince of Nil Kamui and heir to the throne. Along with his throne, he inherits the responsibility of communing with Nil Kamui’s deity, the Red Dragon. This ability makes him a “Child of Contract”, forcing him to exchange the life of a loved one for the ability to wield the Red Dragon’s power.

Sir Swellow: Black Dragon Knight from D’natia, one of the kingdoms fighting over Nil Kamui. He joins Ibuki’s quest and lends his sword as an able fighter. Well, he lends his sword until it breaks. Then, he grabs a new sword – and breaks it.

Lou Chun Wah: Secretive and selfish warrior on Ibuki’s quest representing Kouran. She carries a talking weapon that feeds upon its victims.

Red Dragon: The deity of Nil Kamui. When Kouran invaded the island, he went nuts instead of protecting his people. He works with Ibuki, but only at a steep personal cost to him.

B-. You could do a lot worse and you’ll probably find a lot to like. You just won’t be surprised very often.