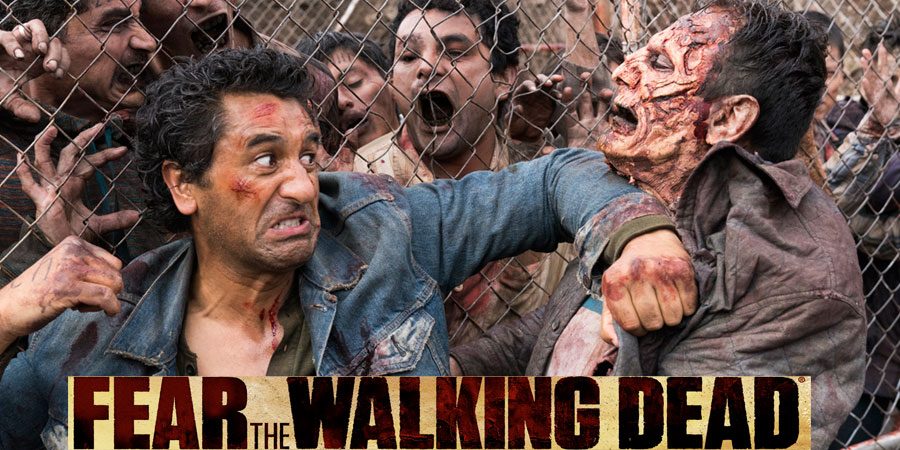 If you missed the season 3 premiere of Fear The Walking Dead Sunday night, you missed something great! You missed Travis in total badass action! This season started off with a BANG! Any naysayers can eat literally eat crow, in my humble opinion. This is a damn good show! On it’s own merit, it rocks. A completely different series from The Walking Dead, the sister series that spawned the idea. If more people would watch with an open mind, they would soon be fans of the show.

AMC decided to put the first 2 episodes together for the big premiere, and it was not a waste of time. The 2 hours, minus commercials, was a great wake up call for the start of the show. It was packed with suspense, action and frightening moments. With the addition of 3 new main characters thrown in the mix for good measure. Jeremiah, Troy and Jake Otto, will be serious problems to contend with this season! Let me explain. Jeremiah Otto Sr., who is brilliantly played bu Dayton Callie, is the father to the two young men, and he has a serious control issue. His past as a fanatical prepper, has given this guy the where with all, to have designed and structured a large ranch that is purely self sufficient. He has loaded it up with people and set down some very strict rules. He is assisted by his sons, Troy, who is a very creepy, insane young soldier, and Jake the elder, who has a good head on his shoulders and is more empathetic to others people. Together, they will surely cause some havoc with our family of survivors. 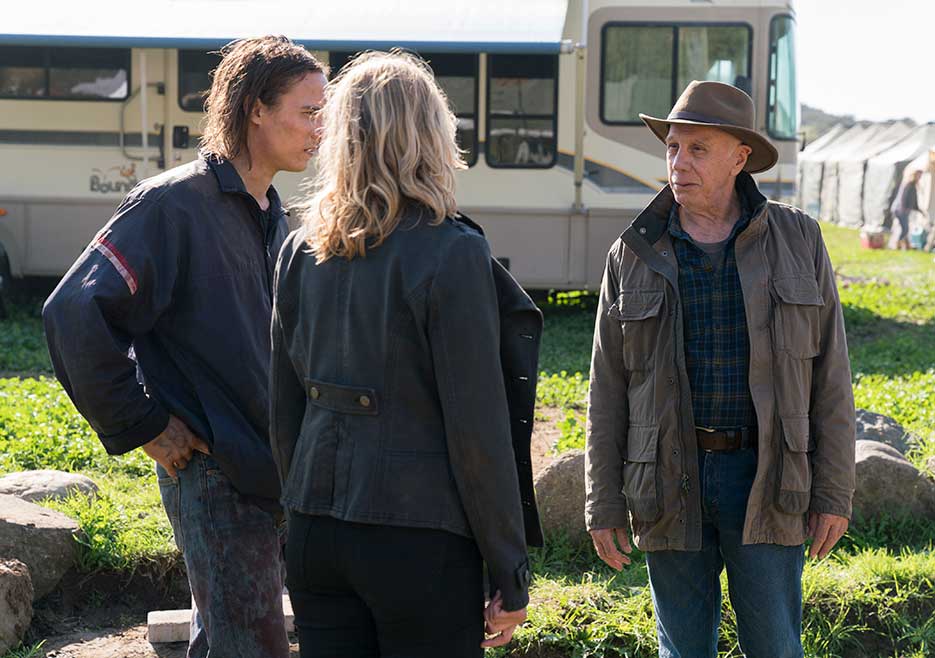 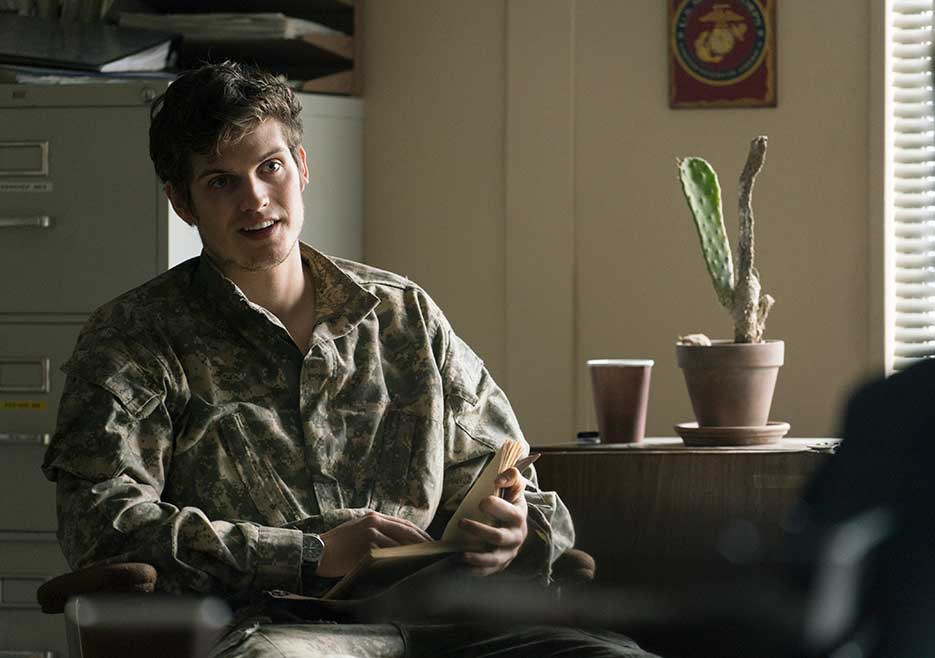 Troy, another newcomer, is played by Daniel Sharman. This boy has some very serious mental issues. As he is heading up the militia for his father, gathering fuel and supplies, he is also performing heinous experiments on innocent people at the base!. He gets a bead on Madison, and that’s all she wrote. He is hooked on her, (and Alicia), for some strange reason. Whether it be for a mother figure or something more sinister, the women are in danger. If you saw the premiere, then you would know he got a spoon in the eye for thinking bad things! Shame on you boy!

Jake is the good son. He is played by, Sam Underwood. He seems to know that his baby brother Troy, has a bit of a screw loose. He doesn’t like what Troy was doing back at the base, but there is really no way to handle it. They are brothers of course. I am not too sure he even agrees with his father’s way of thinking. I think in the next episode we should find out some more backstory on these 3 newbies. 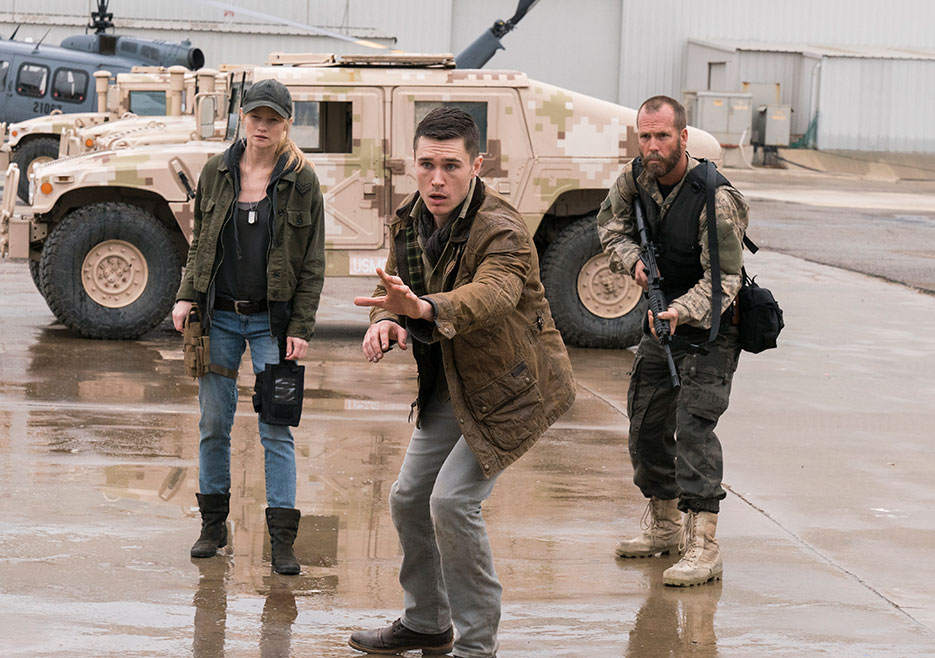 AMC decided to put the first 2 episodes together for the premiere, and that was a good thing. After seeing our family, all brought to the same place, the base, I was happy. My happiness didn’t last very long, when you figure that they are still in danger. The worst kind of danger. Psycho soldiers don’t hold well with me and to see what Troy and his men were doing was really scarey. To almost think that Travis or Nick would perish in the kill room was freaking me out, but they got through it. Luciana being shot by Troy at the end of last season still scares me. I hope that she will recover and go on to be as strong as she once was.

Our group getting separated again at the end of episode 1, was a foreboding event. I knew down deep that something was going to go wrong, with Travis, Alicia and Luciana with the good son, and Maddie and Nick with the creepy Troy. Was it any wonder that someone gets killed in the first 5 minutes of episode 2? And it was Travis!. Who saw that one coming? Of course most of us knew of Cliff Curtis’ new job, as a lead in the next 4 Avatar movies. So that kind of set us up for the death right there and then. But wow! He knew he was fatally wounded, and he knew what would happen, so he took the hero’s way out. Opening the door and falling to his certain death saved everyone on that helicopter. 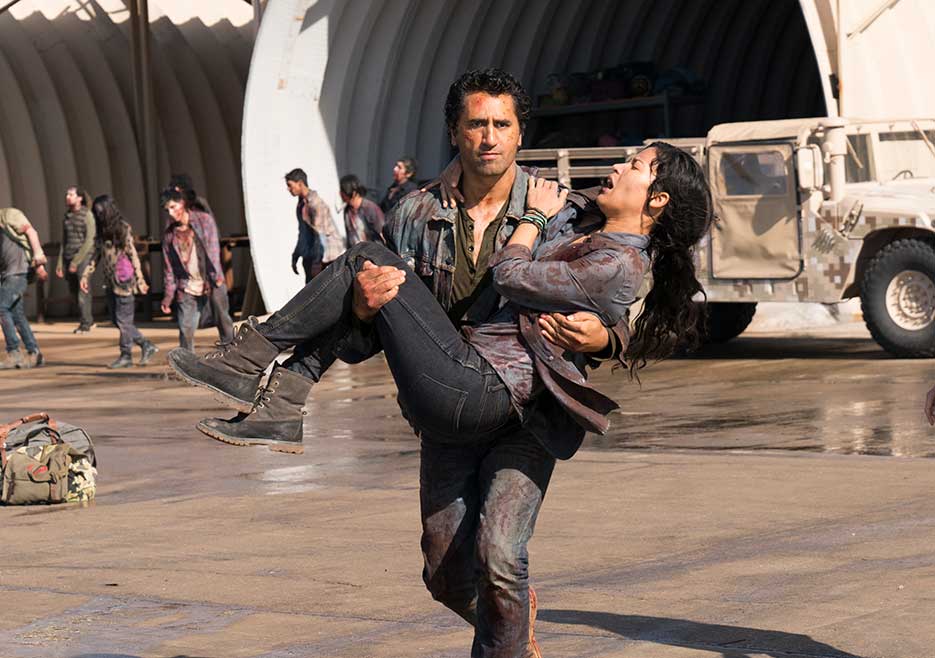 Travis’ death was not really a shocker for me, I had the luxury of seeing the episode before hand. But, what was a shocker was that they did it 5 minutes in to the second episode!. His loss was foreshadowed  At least he got to be a hero in the end, by killing himself, he saved Luciana from the walkers at the base, and then Alicia and Jake and the pilot.  So, it goes to show, if your favorite actor is cast in something big, then it’s almost a certain that they will be killed off. What will happen to the group now? Although Travis was never much of a leader, his presence will be missed. I think that with his death, Madison will become the great badass that she has shown she could be. I think she is the “Rick” of Fear.

All in all, it was a fantastic opener for a series that has to jump through many hurdles with the fans. As long as you don’t compare Fear to it’s sister, The Walking Dead, you will enjoy it so much more! Tune in this Sunday night, for the next installment of Fear The Walking Dead.