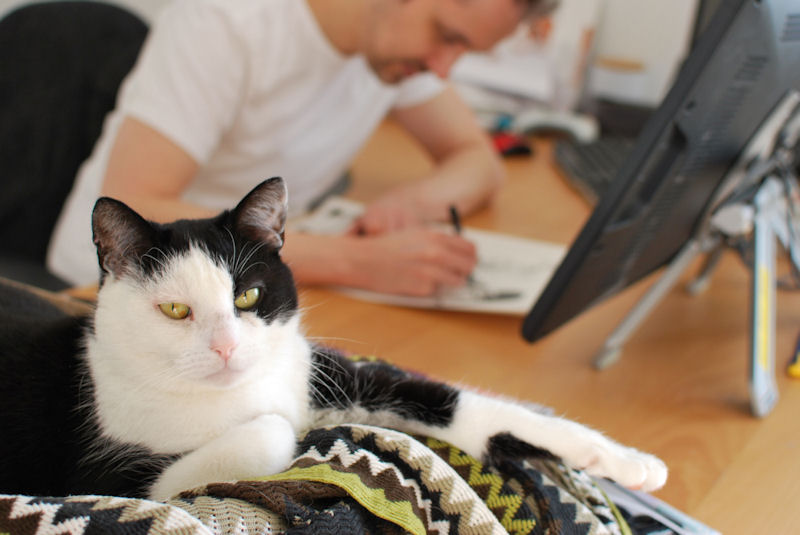 Getting to Know Chris Evenhuis from the Wynonna Earp Comics

I have had the pleasure of getting to know a little bit about IDW artist Chris Evenhuis over the last couple of months via email correspondence. For those of you who do not recognize his name, he is one of the very talented artist behind the recent editions of Beau Smith’s supernatural comic book ‘Wynonna Earp’. Chris has given his talents to not only the interior art of the comic, but also to creating many of the covers.

I hope you enjoy reading the following because I had so much fun emailing with Chris and getting to know more about him and the life of an illustrator and comic artist.

The first thing I’d like to know is a bit about you. Where you are from, your education, your work experience as far as your art goes. How did you get to where you are now?

I grew up and am currently still living in The Netherlands. I’ve always been drawing comics, but professionally I started out pursuing a ‘real’ job as an Environmental Biologist because I didn’t think there would be a living in art for me. Ironically, as a Biologist I ended up mostly struggling with unemployment for a few years until I got offered a job as a concept designer for video games, and a few years later I also started working in (Franco-Belgian) comics. First on the side, later full-time. Then a few years ago I started working for IDW Publishing on their ‘Magic: The Gathering’ series (and a few others) as well.

How did you become a part of the Wynonna Earp world?

My editor at IDW, Carlos Guzman, contacted me to ask whether I would be interested in working on a reboot of the Wynonna earp comics by Beau Smith, which back then they were also hard at work adapting into a TV series to appear alongside the comics (and/or vice versa). I said ‘yeah!’ (or rather: wrote it in an excited manner) and was asked to come up with a new design for Wynonna (who wasn’t even cast for the show then). They were looking at another artist at the time as well -who turned out to be Lora Innes- and we both ended up getting the job: Lora on the first story arc of the comics, with me filling in here and there and doing variant covers. Then I came in after that for the second arc, which also included ‘Legends’.

What has been your favorite experience working on the Wynonna Earp comics?

Hard to pick just one! Interacting with the *amazing* fandom. Learning a lot about designing covers. Reading Beau’s scripts for the first time and talking with him about classic Western movies. Drawing monsters. Receiving pages colored by Jay Fotos. Working with Tim Rozon on ‘Legends’, whose enthusiasm also made me appreciate (even more) how cool it actually is to work in comics. Oh, also: discovering my art on the IDW logo at the end of every Wynonna Earp episode 🙂

What are the steps in bringing it all together to create a comic book, like from concept to print?

This one’s also a bit tricky because there’s really so many different ways. But for example on something like ‘Wynonna Earp’ it’s probably somewhat similar to making something like movies: it starts with Beau’s script, which -once greenlighted by the editor- gets sent to the artist, who draws the pages (in black & white), which then get sent on to the colorist, who adds color, lighting and texture. Then that gets sent to the letterer, who adds the balloons and text for the dialogue and captions. Once all the pages are ok-ed by everyone involved and the issue wrapped up it gets sent to the printer and I’m not sure what exactly happens there, but shiny new comic books come out from the other end 🙂 And all this needs to happen within only four weeks per issue, so everyone’s pretty much always in a hurry!

How much freedom do you have in the creative process of the comic?

A lot of the look and feel is already provided by the show, especially the main characters, but there’s still a lot of stuff we added to that universe and introduced several characters not (yet?) in the show. Sometimes Beau had a broad idea in mind for their looks and would provide reference pictures for clothing and features to work from; other times it was pretty much carte blanche. I had a *lot* of freedom in designing the monsters.

Are there other comics you are working on, if so can you tell me about that?

Well, I have a short story featured in last month’s issue of the Franco-Belgian comic series ‘Magic 7’, written by my writer friend and frequent collaborator Kid Toussaint. I’m currently also working on a soon to be announced new creator-owned comic series with writer friend Paul Allor. Can’t say much about this one at this point yet though, except that it will actually have a few things in common with ‘Wynonna’ and we’re super excited about it!

Hmmm, I’m afraid I can’t really answer this one, because strictly speaking I can’t take sole credit for any (published) original characters because – at least professionally- I’ve always worked with co-creators. And I should probably clarify that by ‘always’, I also meant drawing comics just for fun ‘on the side’, long before doing so for a living.

I should of explained what I meant better. What I meant to ask about was anything you have done off book, something that hasn’t gone into production. example… I had a friend while growing up that drew comics and created this cool ninja girl who used weapons made from recycled beer cans, lol. I can not remember what her name was but she was a guardian who protected those were in danger because of someone being drunk, like a drunk driver.

Oh, aha, well a friend and I did have one absurdist series of comic strips about a rabbit that got dropped on its head when it fell from the tree it was growing on, which broke the light bulb growing out of its head (it was a genius rabbit) and it ended up clueless. It would meet other animals, go on road trips and chase butterflies. Your friend’s character clearly sounds like much more of a role model 🙂 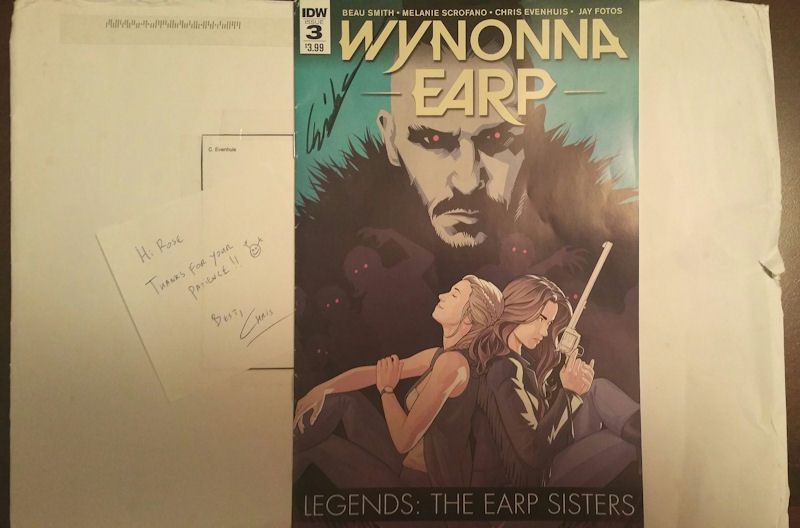 I thank Chris for answering my questions. He is so sweet and such an amazing guy. And because he is so generous, we are able to give away to one lucky reader an amazingly rare prize via twitter: a Chris Evenhuis signed copy of ‘Wynonna Earp Legends: The Earp Sisters’ #3. (only 4-5 Chris Evenhuis signed copies of any Wynonna Earp comic exists at the moment). Want a chance to win this? It’s really simple! Just…

The giveaway ends June 28, 2017 11:59pm EST with the winner being notified and announced shortly after. Please be sure to follow our official twitter @ThreeifBySpace so we can notify you if you are the winner. Good Luck!

Chris also shared that Legends: The Earp Sisters Issue #4 of ‘Legends’ is his final issue (for now) on ‘Wynonna’ as interior artist, but will still be doing covers for the upcoming ‘Season Zero’ miniseries.