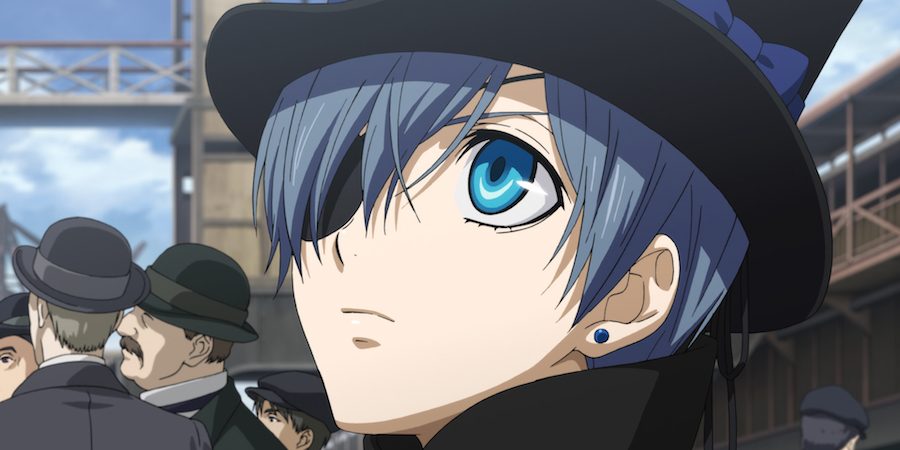 After 3 years, Ciel and Sebastian return to the world of Black Butler. Black Butler, Book Of The Atlantic follows the next manga arc, Luxury Liner. Fans were excited given it wasn’t another season 2 situation. For season 2, the series went completely out of the canon material of the manga. In fact it started after the Indian Butler arc of the first season. Regardless season 3 brought about the most popular arc, The Circus Arc, followed by The Phantomhive Manor Murders. Now Book Of The Atlantic has brought us yet another cannon story. Funimation licensed the new film and aired it in theaters last week in english dub and subtitled. 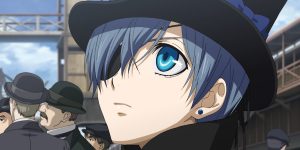 The latest dive into the Black Butler world brought with it a ton of genre references if you were looking hard enough. In fact some were so blatant that you simply couldn’t miss them. First we got reanimated corpses, and a doctor Stoker. Could Stoker been named after Bram Stoker? Seems fitting. With the ship full of reanimated corpses they must find a way to stop them. But what fun would it be to stop them without a time limit, from say the ship hitting an iceberg.

So you thought the callbacks to Titanic were done there, nope. Leave it to Grell to show up and want to be held at the end of the ship, just like in the film. I thought it was a fun little bit of levity for the series which is otherwise dark. One of the other interesting things we learn is Elizabeth is far more capable then she seems. A master swordsman in her own right, she protects Ciel for the first time. Ciel is a strong willed person, no doubt. Surviving the hell he went through and summoning a demon. But physically he is weak and he knows it. So needless to say he was just as shocked as we were when Elizabeth mowed down all the corpses. 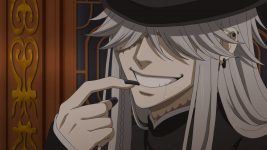 Personally the more important story points we got out of this was the Undertaker’s true identity and a better look at Ciel’s past. If you watched season 1 till the end, of course you knew who the Undertaker was in the past. However, if you ignore that as non-canon and only watched the canon materials then this reveal was new. He is messing with human life and is a deserter of the grim reapers. Just what his ultimate goals are remain unknown. However, This won’t be the last we see of him for sure.

When Sebastian is stabbed by the Undertaker, we get to see his cinematic records and how he and Ciel first met. Granted we have seen bits and pieces throughout the seasons about what happen to Ciel. Each time as dark and damaging as the time before. However, I found it interesting how both of them were educating each other on various things before either were ready for their respective roles. For Ciel to become a true Earl and for Sebastian to become a true butler. 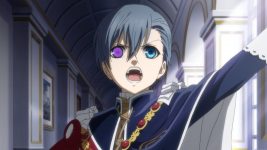 Admittedly I had not seen Black Butler at all before. So when I received the press kit from Funimation I decided to marathon my way through every season before watching. It would have been pointless to go into Book Of The Atlantic without the history first. I was surprisingly entertained with the series. The english accents took a little getting use to at the start but grew on me. J Michael Tatum is one of my favorite english voice actors which made the english dub even better.

Book Of The Atlantic is another fun dive into the world of Ciel Phantomhive that serves as both a great stand alone story and a great way to fill in more history and depth to the world and its characters. If you are a fan of Black Butler the anime or the manga, you must go and get this once its out on home video. If nothing else, you will get a laugh out of the cultural references within the film but you also get to say you watched the walking dead on the titanic with demons and grim reapers! Sadly the limited theatrical release is over, but Funimation is sure to announce a home video release date in the near future.

Also in case you have not already purchased the series first few seasons on DVD, Season 1 is going out of print so now is your time to pick it up before its gone. Funimation still has the license for season 2 forward, but season 1 has been taken back by Aniplex.

And when it comes to favorite funny moments from Book Of The Atlantic? The video clip below should explain it all!