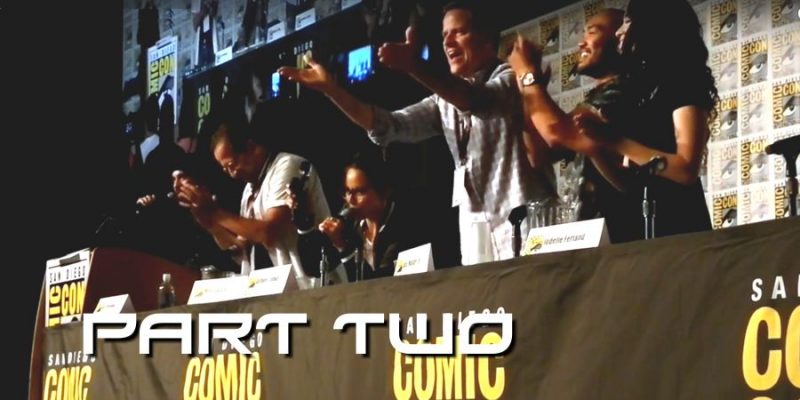 Part 2 of the Dark Matter panel from SDCC 2017 picks up right where part 1 left off – Much like an episode of the show itself! The panelists were getting even sillier, at one point frequently mentioning Firefly just to get a reaction out of the fans; not that they needed any other show’s help to get the fans excited. Everyone was having a great time and it was nothing short of a party atmosphere.

A special treat in part 2 is that I’ve been given permission to share a few snippets of the blooper reel. It’s a little hard to see on the projected screen, but you hear what’s going on and see well enough. An extra-special thank you to NBCUniversal and Prodigy Pictures for giving me permission to share this rare gift. Naturally, they don’t want me to give away the whole thing – It is a huge bonus for those who buy the DVD/Bluray release. So once you’ve been teased, you’ve got even more reason to buy season 3 once it’s released.

The topic of family and interesting characters ran strong through the panel. Some people take issue with Dark Matter not having more VFX and “shinier” VFX, and I get that. But to be fair, it’s the characters and their stories that make for an interesting long-term series. In season 3 Dark Matter is better than ever. And take another look at those VFX – I’d put them right up there with the best, whether TV or film. The show just chooses to not make it all about the shiny things and focus on the story. That’s just one of many things I love about the show.

This second half also got to the fan questions segment. The first person stated the clothing style of Two as, “black with varying shades of violence” which is hilarious. Person – I wish I knew your name because I would totally credit you right here! Naturally, a fan asked if we could get more than 13 episodes per season. As fans, we all want more Dark Matter, so your chance to get more is right here. Watch the second half of the panel and get plenty more right now.

One last thing. Please, watch the show live (and legally), live tweet with all of us, use the hashtag #DarkMatter with every tweet, and tell all your friends. Your efforts WILL help the show, so keep up the good work! Thank you.

If you missed part 1 or just want to watch it again, click the image below.