SDCC 2017 was marked by beautiful weather, lines of enthusiastic fans, and enough activities to satisfy any geek’s desires. In short, it was a typical year, though somehow it felt a little more upbeat this time around. I don’t know if it was the venues, which are always great, or maybe it was just me.  Dark Matter is having its best season yet so I was extra stoked to hear what the cast had to say about it. I had the wonderful fortune of not only attending the laugh-until-you-cry panel, but also had an opportunity to interview the attending cast and EP Jay Firestone. Those interviews will be up soon, but for now you can enjoy part one of that infamous panel. (Part 2 will be along very soon as well)

Update – Links to all other Dark Matter SDCC activities here:

During the packed hour, the cast took time to talk about what makes the show so popular with the audience. They mentioned things like the balance between seriousness and comedy. That was one of the things that made the Stargate series so popular. But this rowdy bunch doesn’t stay on topic for very long before they begin joking around, much to the entertainment of the packed room.

Just a few points covered in this fun hour were:

And all that took place in under 10 minutes! This panel was packed with information, fun, and a whole lot of acting up, both on stage and in the seats.

When you’re done, click on the image below for Part 2 of the Dark Matter Panel at SDCC 2017 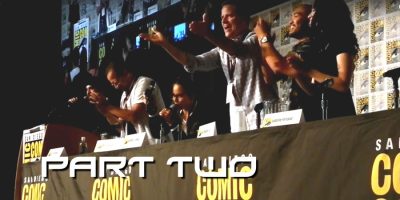 Now, get comfy. Grab a protein bar and a bottle of whisky, and enjoy part 1 of the Dark Matter San Diego Comic-Con 2017 Panel.