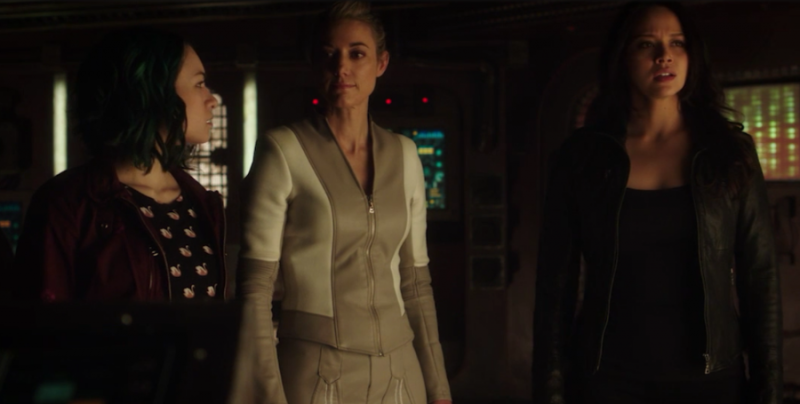 Alright my fellow Raza Crew fans, tonight’s episode was wonderfully intense. Though “One Last Card To Play” has seriously has me concerned for the future of our crew. Remember a couple of weeks back when we were all laughing along as Three learned fluent French and then future Five dropped a bombshell on us with that terrifying list? Yeah well that terrifying list is starting to happen now. Tonight we say hello to some old acquaintances and goodbye to some new friends. “One Last Card To Play” is one hell of a good ride, continuing the streak for how amazing season three has been.

We’re back in Ryo’s territory and boy does he have some anger management issues these days. Somehow Two and Three have managed to get themselves rounded up with the would-be assassins family and friends. I’m not quite sure what they’re playing for at this point, but because it’s going against Four-No-More, count me in. They easily sniff out the “leader” of this group and offer him a deal. If he helps them take over the warship, they’ll drop all of these prisoners off in the newly founded independent colonies, presumably where Six is at. An agreement is made and Two and Three easily drop every single guard on the ship. That was slightly disappointing, I had higher hopes that these Imperial Soldiers would at least put up a small fight. Here’s where things get wonky though, they space all the prisoners and kill the one who helped them take down the guards. From here they call Truffault and brag about this fancy new war ship they’ve stolen from Ryo. This particular warship is considered neutral in the larger corporate war and will be useful for smuggling cargo. I know Two and Truffault have an unexpected partnership, but something feels off about this entire situation.

There we go, this makes more sense now. Wexler and Tash appear with the Android, revealing that we’ve just been watching Portia and Boone, not our Two and Three. But what the hell are they doing stealing war ships and making deals to smuggle unknown cargo for people?! Though I love that alternate universe Android is just as sassy as our own. “That wasn’t pessimism, simply a statement of fact. Like, we stole a ship. We’re flying through space. Or, I could detach your head with minimal effort.” There’s just something about Android’s character, she has been absolutely fantastic this season. 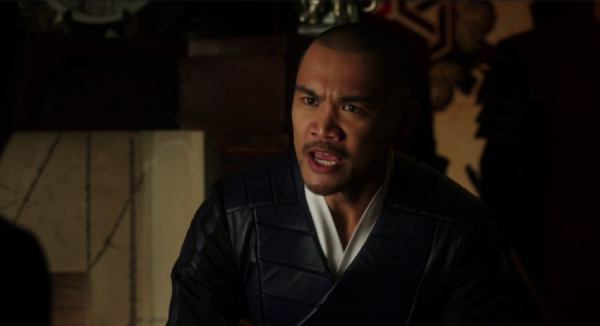 Ryo makes contact with the stolen warship, and believing it’s his old Raza Crew behind the theft of not only the blink drive and this ship, he’s of course fuming. Portia just hangs up on him but poor Teku gets a mouthful from Ryo. A personal vendetta against the Raza Crew would be a waste of their current resources, but Ryo can only see red. This is where it’s evident that he might need an anger management class or ten. So not only do we have the AU Raza members making deals they’re going to double cross, they are also putting our Raza crew in danger from multiple enemies. They later meet with Truffault’s lackey, get a bunch of missiles to “transport” and a hefty sum of cash before disappearing with it all, leaving Truffault angry with a very confused Two.

Pending the return of those missiles and the cash, consider our unlikely alliance suspended. – Truffault

Well, this is now a fun situation for our crew to deal with. Even the Android can tell that this is a weird ass situation. Not only are they having to deal with the fallout of their AU counterparts poor life choices, but Five points out that it’s not good for their reputation either. Two has the Android hack into the GA database and scan their facial recognition for any sightings in the past few months. Image after image pops up of Two and Three on planets that neither of them have ever been to. Finally an image with them, Tash and Wexler appears and suddenly this puzzle looks a whole lot clearer. They now know for certain who exactly hitched a ride back with them from the AU and what they’ve been up to. Five and Two might be concerned with what the AU crew is doing to their image, but as Three points out, “To be fair kid, our reputations are already pretty trashed.”

Adrian and Solara are still with the crew, but Adrian is having doubts about this lifestyle. Solara is actually pretty handy but Adrian hasn’t really brought much to the table except trouble. Just as he arrives at the conclusion that they’ll call it quits, Five pops in and lets him know that they need him. Perfect timing right? It’s actually not a bad plan, have Adrian contact the UA Raza offering up a buyer for the missiles, they don’t know that he is working with the real crew in this universe so it could be the perfect opportunity. Portia agrees to a deal but only if Adrian will be present at the meeting with the buyer. So, they might not be quite in the clear yet.

Suffice to say, Adrian might not be cut out for this adventurous life. He demands to be given a gun for the meeting with Portia and of course immediately gets himself into trouble with it. Portia must have known something was up because she sent Wexler on ahead and then abandons him in the woods. However, she sneaks off and finds the Marauder and Three sitting inside of it. Here’s where things get complicated.

Portia finds the Marauder and begins phase two of whatever plan it is she has, while Two has Wexler captive. Back on our Raza, Portia shows up with the Marauder, trying to be sneaky. The Android notices that her clothes are different, causing some concern. Portia tires to shut down the Android with a security sequence, but thankfully that’s been updated and Android is able to restrain Portia and get her in a holding cell, but not before we see a bad ass fight sequence between the two of them, Go Android Go! Android deicdes to check out the Marauder, where she finds a tied up Three who immediately blurts “The other Portia.” He says he’s going to go back down for the others, but needs to arm up first. We get a glance at the other Android, who I admittedly hate less than all the other AU characters, and Tash. Apparently they have the real Three and Boone is pretending to be Three over on our ship. He seemed to fool the Android okay so things might not be looking so great right about now.

Boone then shoots our Android and attempts to free Portia from the holding cell. Thankfully we’ve got a little trick up our sleeve that the AU crew seem to overlook…FIVE! So Five takes care of Boone and makes contact with the AU ship to work out a deal over exchanging prisoners. She’s got Portia and Boone and she wants Three back, poor Wexler, he’s not even important enough to be considered a part of the trade. Tash however isn’t really in the mood for negotiations, making it clear that she’s willing to destroy the real Raza, Blink Drive and all if it comes down to it. Luckily their Android actually has some sense and is able to stun her before any real damage is done.  This is why the Androids should be in charge of logistics.

This next scene gave me so so much joy, the Androids meet to complete the terms of their deal. AU Android deposits the missiles, cash and crew member in a clearing just Northeast of their meeting point. Our Android left the AU crew members in a clearing just Southwest of their meeting point. AU Android makes a snarky comment about having to gag Three, and our Android of course understands why that might have been necessary and admits to having restrained the AU crew as well. The two have a discussion about the Blink Drive being in an irreparable state, and that it’s pointless to go after it. Both Androids are just so outstandingly perfect in this scene and how they interact between one another. I love that we got to see the AU characters reemerge  for this story and you can tell that the actors had a blast getting to play both sides of the coin this week.

Traffault is happy to receive back the missiles and annoyed about some missing cash, but overall that relationship is at least back on the rocks. Adrian and Solara end up getting passage to a planet he has family on out of the deal. I would have loved to see them stay around for a bit longer, and Solara especially fits in with the Raza crew, but you can’t win them all. Maybe we’ll hear from them again in the future. Making a resupply stop brings a surprise for Five, as they’ve decided to resupply and check in on Six at the same time. But clearly something is wrong there too. Who knows what next week with bring in that regard, especially as Portia is now buddy buddy with a Ferrous Corp general, the same one last week who referred to Six as Agent Zero. I don’t know what will happen next week on Dark Matter, but I can tell you that there are dark days ahead for this crew.