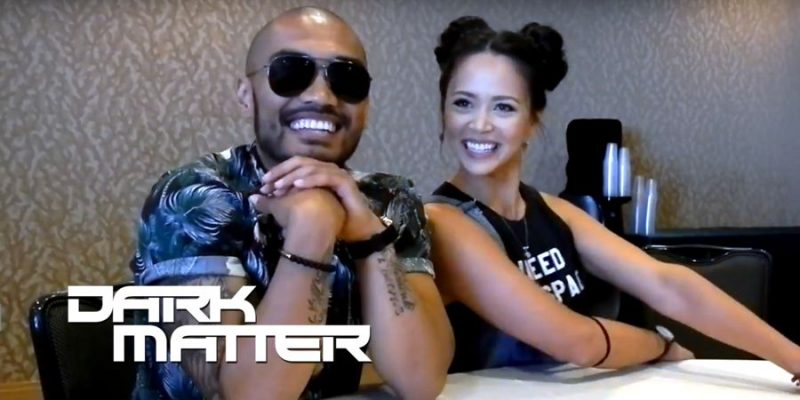 We had an opportunity to sit down with the cast of Dark Matter at San Diego Comic-Con and ask some of your, and our, questions. One of the things I love about the cast is that they’re all so friendly and approachable. These guys put you at ease and really make you feel like you’re talking to old friends. They also get along with each other. If you’ve seen the SDCC 2017 panel, you know this already. If you haven’t, do yourself a favor and check out Part 1 Here and Part 2 Here.

In this interview with Melissa O’Neil (Two/Portia) and Alex Mallari, Jr. (Four/Ryo) we learn how they feel about their characters and their motivations. Melissa speaks to what probably brought Portia Lin to such a dark place and it’s a back-story I’d really love to see. Alex addresses Ryo’s new role as a leader, which comes with more talking and less action than he’d like. Being in charge is full of paperwork. Swordplay? Not so much.

Overall, the two of them enjoy playing the dual roles and have very detailed ideas of how their characters got to where they are. As a fan, I really appreciate that they’re so invested in their characters since we are, too. Apparently, Ryo has daddy issues. That explains a lot, doesn’t it?

One thing was made clear – these guys, cast and crew, are a tight-knit bunch. They get along famously and enjoy what they do together. That’s a good thing since they’re usually huddled together in the dead of winter from before the sun rises until well after it sets. That also limits the fights to the on-screen variety!

Oh, and there’s a tiny tease of Melissa’s singing near the end!