As Doctor Who finishes the Peter Capaldi era, we had a chance to sit down with Peter, several other cast members, and outgoing writers/producers Steven Moffatt and Mark Gattis. In this post, we talk with Capaldi, Moffatt and Gattis. Watch for the interviews with Pearl Mackie, Matt Lucas and Michelle Gomez! 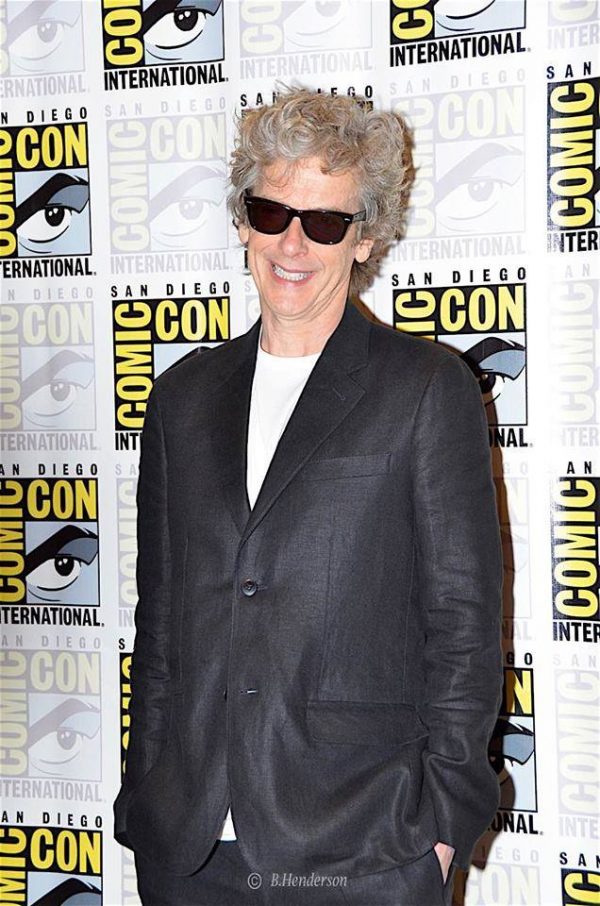 Q: You’ve created so many emotional moments as the Doctor. How emotional is the (Christmas) episode going to be for you and for the audience watching at home?
Capaldi: It was very emotional for me, and this is what happens with TV shows generally, I don’t know, I’ve never really done a series before where you’ve worked with the same crew and the same people every day for four years, and you get very close to people. So, I find that what happens is in the script, when the characters say goodbye, they articulate that better than the human beings do. So you often find when you do those scenes, the scenes become quite emotional because you’re saying goodbye to Jenna (Coleman) or whatever, they’re more articulate than we are. So it was therefore emotional saying goodbye to Doctor Who. But he said it in a better way than I said it.

Q: I have to say, you’ve been my favorite Doctor. And I know you’ve been a rocker for years – whose idea was it to have the Doctor play the guitar? Was that yours?
Capaldi: Yeah, I just thought it would be fun. I thought he should be like a  teenager, and have a big old Marshall amp with valves that he’d stop all over it. I thought it would be funny if the TARDIS was spinning through space and you had these power chords coming out. I thought he should not be very good, but he’s much better than I actually am, because someone else comes along and does all the shredding and stuff like that. Yeah, it’s fun! But I came up with that.

Q: Rachel Talalay has been a big part of this era of Doctor Who. Can you talk about what it’s been like to work with her and she’s meant to the show?
Capaldi: She’s an artist. I asked her to come and do my last one, and I’m grateful she agreed, because I wanted it to be in the hands of somebody who was a visionary and who has a cinematic thing about her. It’s a tough world because, the world of episodic television, it’s very easy to just deliver the material, or to just have a wide shot or a closeup, and some directors do that. And that works, but it’s better to have someone who is an artist and has a visual understanding and a cinematic understanding. She’s also a big Doctor Who fan and she’s incredibly smart. And for me, it means I’m with someone I can trust. I don’t have to ask Rachel why, she tells me to do something and I don’t ask, I just do it. She’s just brilliant. And she pushed Doctor Who, our Doctor Who, into a different league visually and aesthetically and intellectually. Steven’s incredibly clever, and Rachel’s incredibly clever, and they worked together. It was a great benefit to the show. I love her, she’s fabulous. She’s the real thing, and I’m always interested in the real thing – the real actor, real artist, real director. She’s absolutely bona fide, 24 carat.

Q: Doctor Who is really about change. You’ve changed through your time in the TARDIS. How do you think you’ve changed the Doctor?
Capaldi: My version of the Doctor, I don’t think he’s changed very much. Everyone says that to me because they think there’s a variation in the way we go from the first season to the second season to the last season. I think what happened was the writers became more comfortable with me. I always wanted to make a very clean break from what had gone before. I love Matt, and David, and Chris Eccleston, but I think there had been a tendency for the Doctor to become quite user-friendly. I wanted him to be more distant, more difficult to be around. Because he’s an alien. People think he’s a guy, they think he’s just someone you would meet. Because when I grew up, Doctor Who wasn’t like that, he wasn’t someone you would  meet in the street., He was a weird alien creature. So I think it took them a while to figure out you could do that, that he could be funny and affectionate, and witty and clever and all that. So for me that’s all the same. But I get why people think it’s different. I love what we did in the first season, but I look at us now, and say wow, he’s tough. And without that, the rest of them wouldn’t exist. We couldn’t just come in and be light adn friendly and all that. We had to come in and be stranger. 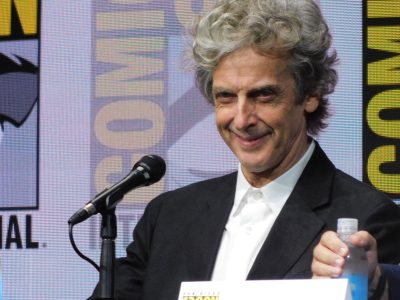 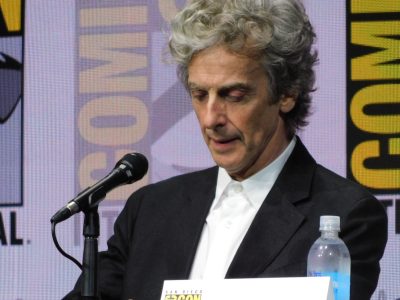 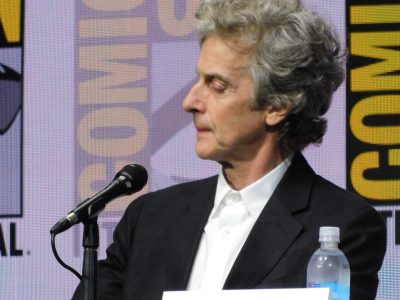 Q: Is there an episode you think defines your Doctor?
Capaldi: I think probably Listen in the first season, because it’s the first time we really see he has this obsessive quality about him. Because in that episode, he has a compulsion, that there’s a creature that exists that you can’t see, and he sets off to find it, even though there’s no evidence for it, and you can’t see it, and he’s absolutely committed to the idea. And he’s also slightly, he looks a little more Gothic-y, a little more Cabinet of Dr. Caligari, than he is now. And I liked all the little candles and all that stuff. I liked all that. And so for me, that was really one of the points where you knew who this Doctor was. And he was quite brutal with people, but he was also kind and funny. And acidic. So I think that was the first one where he really appeared. 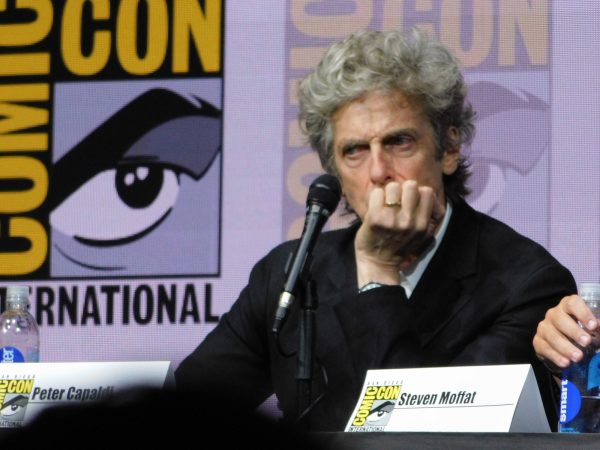 Q: Are you looking forward to being totally a fan again?
Capaldi: Yeah! I think Jodie’s great, she’s really excited about it, obviously, I spoke to her last week, I think she’ll be just great. It was amazing talking to her, she had so much energy and so much enthusiasm, so much passion for the show which was nice. And I think she’s a great actress! It will be just exciting to see what happens! It will be fun just watching Doctor Who! and to watch it without worrying, oh I was terrible in that.

Q: As you move on from Doctor Who, what did you learn about your imagination that you didn’t know?
Moffatt: I always knew that I was fairly wild in my imaginings. That’s why I always wanted a job like that. I think where I got better while writing for Doctor Who was writing the emotional consequences, I think I used to be much more glacial as a writer. Writing something that I think is funny, I don’t know  how engaged I am. I got to realize that it doesn’t matter how fantastic the monster is, you have got to explain what it means  to the people who see it.
Gattis: I’m just pleased and privileged to learn from Russell and Steven and everyone involved, it’s just been a wonderful journey. There’s lots of bodies, and structural things, and just being around it so often. I’ve made a journey in my fandom from being a slightly conservative fan boy from when I was 14 to someone who’s thrilled at the innovation in the show. I’ve always been trying to push it. You know, we all are. What you want to do is make nostalgia for the future. You want to make lots of new monsters. It still fills my heart with joy that you can look at the Doctor and find monsters that I’ve created. And God willing that people remember them.  Equally it’s just about what’s always been the engine of the show, which is change and trying ti innovate. Or else you’d still be in the junkyard, you know. 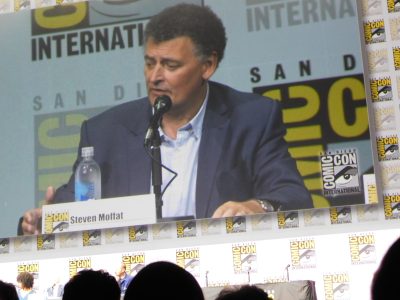 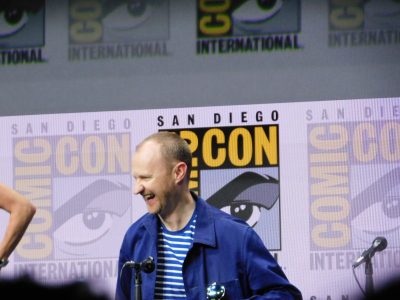 Q: People don’t talk about the director’s influence on television, but Rachel Talalay has been a big influence on this last season. Can you talk about her influence?
Moffatt: I’d rather talk about all the directors, but Rachel is an absolutely brilliant director, and she’s a very fluid director, and she’s somebody who can direct in any style. She doesn’t have a particular style; you don’t look at her and say, we’ll do a  horror episode, and we’ll get Rachel. You can actually say to Rachel anything, she’s an absolutely amazing director. One of the critical things about Doctor Who is that it is impossible to have a good Doctor Who story that is badly directed. It is an immense challenge to direct Doctor Who. They are incredibly hard to make. And the thing that people don’t get is how fast that is done, how quickly. It’s a few days.  The Doctor Falls is an absolute epic of an episode, with everything going on in it. We delivered it two days before it transmitted. The director’s influence is massive because it is… these shows are all but impossible to make, and we’re making it for an audience that will then watch a Marvel film immediately afterwards. And there is no way we can keep up with that, but we have to pretend we can.

Q: Favorite episode that either you wrote or someone else wrote?
Moffatt: The thing is, we made the show so we think they’re all good. You may not think so, but we do. I love Vincent and the Doctor, I loved The Robots of Sherwood, that’s an awesome episode, it’s so funny! There’s quite a few. Of the ones I actually wrote, I suppose I’m supposed to say Blink, but  why not. Day of the Doctor worked well, Heaven Sent was a challenge. I really liked that one.
Gatiss: I would probably say World Enough and Time. It’s a total love letter to Doctor Who, I put everything I love into that episode. It’s as very special thing for me.

Q: What are you looking forward to about being the transition into being a Doctor Who fan again?
Moffatt: I haven’t thought about that so much, I’ve just thought about how unstressed I am. I’m in love with the fact that I’m not endlessly stressed every day. At a certain point, I’ll have to think about how I’ll get to sit down and watch Doctor Who. It’ll take me a while to get used to the fact that they shrugged me off a little too easily, and then I’ll just love it.
Gatiss: Same thing, it’s just exciting. Change, as they say, has always been the engine of the show, Jodie’s a brilliant choice. It’s just like, here we go again. It’s a lovely feeling.