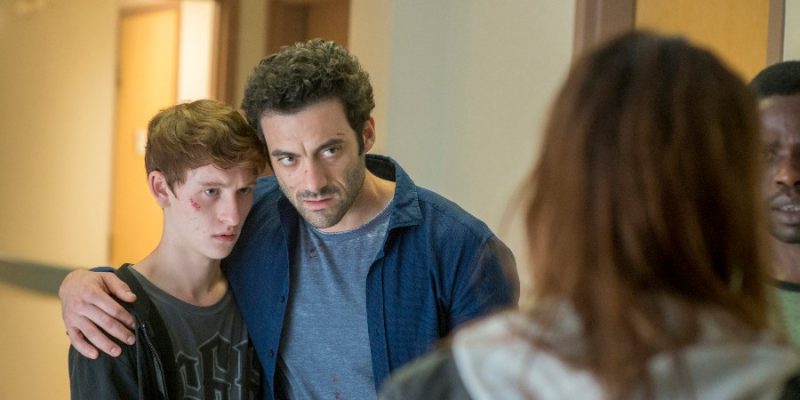 The Mist Review: The Devil You Know

The Mist hasn’t let up at all in the small town of Bridgeville, but not all of the residents have lost hope yet. This week we ventured a little further out than just the hospital setting, but the mist is still unforgiving. We catch up with both groups at the mall and the church, plus get a little insight into Mia’s history and her life before the mist.

At the mall, things are still quite tense, after sentencing one of their own to wander in the mist, not everyone is feeling so safe back in the main camp with Gus in charge. Eve is still holding things down at the loading dock, but there are some hard feelings about the events from a few weeks back, and the loss of an innocent child. Alex blames herself, and doesn’t understand why the mist didn’t want her too, so Eve tries to distract her for a bit and takes her into the mall to look at clothes. 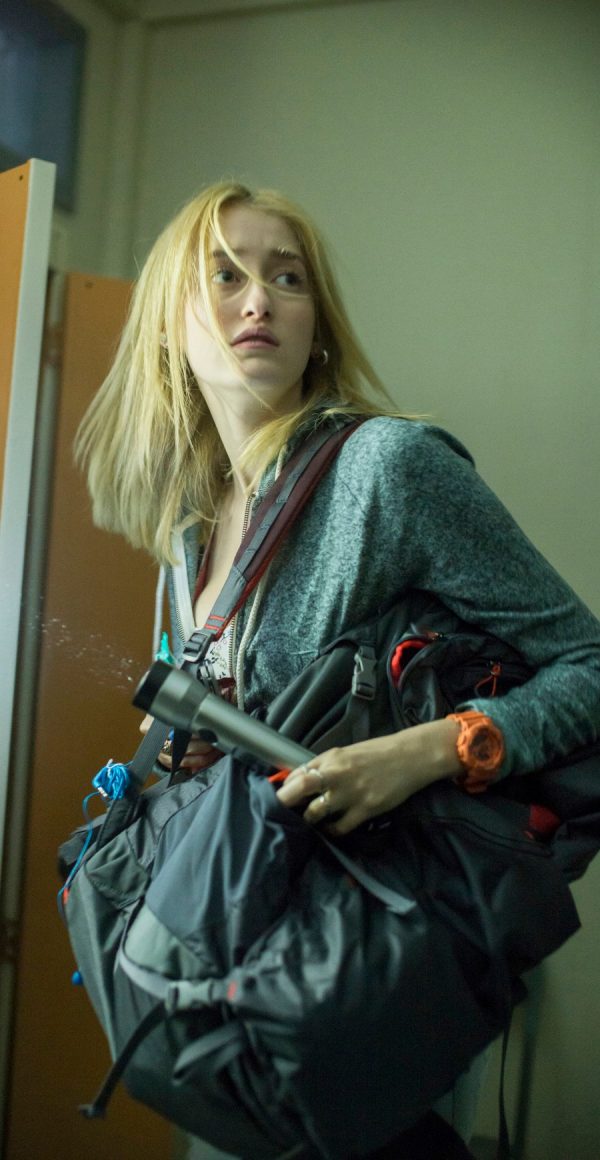 This is when Alex gets the genius idea that maybe she can go find help for everyone trapped in the mall, if whatever is in the mist doesn’t want her, she might be able to walk through it unharmed and find help. Eve shuts this idea down but we all know how teenagers can be, Alex seems pretty set. Eve decides to give hope to the rest of the group trapped in the mall, it might be a false hope, but having any kind of hope at all might keep their humanity for a bit longer. She goes to the printing and stationary store and begins mocking up some fliers when Gus approaches her. Sure, they have their differences, but he agrees with her on this front and asks to help. The fliers definitely accomplish their task, when they’re found towards the end of the episode, the entire atmosphere of the mall changes, even if for just that moment.

While Eve is busy making fliers, Alex decides to stop in the camping/hiking store to pick up a few items for her journey into the mist. She becomes trapped in the break room, which seems innocent enough at first. Then the gasoline comes and a match. Someone has deliberately trapped her in there and left her to die. I want to point out though, how terrible of a plan this is. No matter what revenge you want to inflict on someone else, starting a fire in just the break room one of store doesn’t mean that the fire won’t spread and take out half the damn mall, inviting the mist in for those still trapped inside. Jay hears Alex screaming and is able to come to her aid. He’s a bit annoyed that she accuses him of starting the fire just to save her, and admits that he’s only in that area of the mall because he no longer feels safe with the main group. Eve allows him to stay with them, but not before threatening him first. 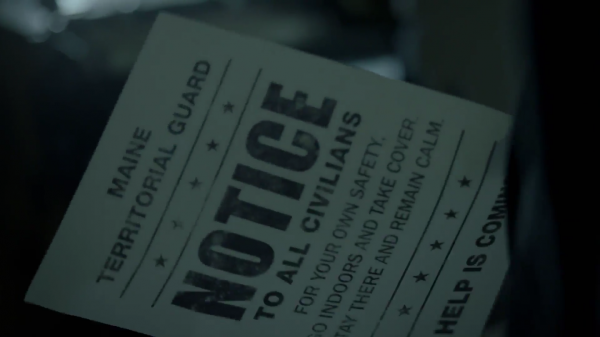 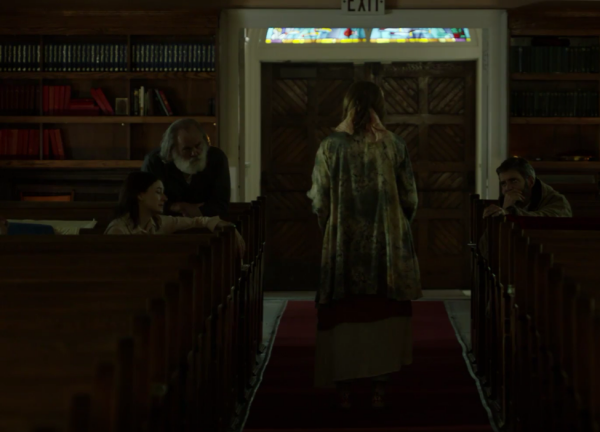 At the church, things are still spiraling downhill for the Father and his creepy super devout follower. To be honest, I don’t think that members of this congregation are beginning to follow or worship Mrs. Raven in the way they do God, but she’s digging through old journals of the priests who were there in years past and at this point any kind of conversations to keep your mind off what’s happening outside are probably good ones. Super creepy devout follower isn’t taking this well though and decides to take matters into his own hands, surely God will forgive him for doing terrible things to Natalie if it means that he can save her soul in the end. This is the kind of behavior that the mist brings out, the monsters so easily hidden within. He lures Mrs. Raven upstairs to the tower of the church and intends to torture her there until she repents and sees the light. Natalie instead breaks open a stained glass window, letting the mist in, and locking him in that room to deal with whatever comes for him. That probably wasn’t an easy choice either, but he threatened her life and she still seems to be the only person around who is actually looking into The Black Spring and if those two things might be connected.

At the hospital, we discover yet another non mist “monster” who thinks he’s doing the right thing. But let’s start with Bryan and his unconfirmed identity. Our Bryan goes into the real Bryan’s room, tries to get answers about who he is and how they know each other and what is going on. But that leads to a fight and our Bryan killing the real Bryan off. My only big gripe with the episode this week is that even in an emergency situation, the two of them fought loudly enough and long enough that someone would have poked their head in to see what all the fuss is about. That is a quick chapter opened and closed on Bryan’s true identity. Though it could be revisited in the future, for the moment, the only person who could have given him (and us) some answers is now dead. 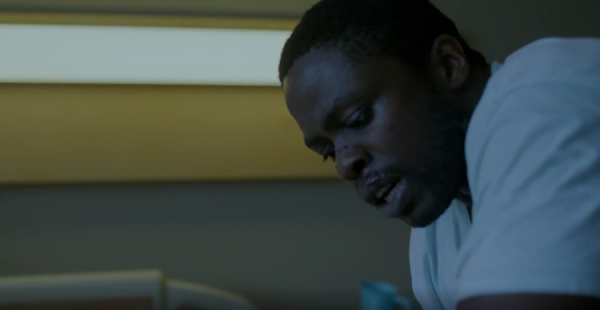 Kevin decides that it’s time to go, and is ready to leave Bryan and Mia there. They won’t be alone and will watch out for each other, he needs to continue on to the mall. However, Mia is no longer there, and she stole the car. So Kevin and Adrian are stuck for the time being anyway. Mia takes the car back to her mother’s old house, looking for that duffel bag of money again. I don’t know what she thinks that’ll will do for her right now, even cash isn’t that hot of a commodity when every one is trapped where they are.  She finds what she’s searching for in a mist filled attic, and just when she thought she was out, the mist starts to mess with her and she’s drawn back in. She keeps trying to leave but every time she opens the door she’s just in another random room of the house, with her dead mother following her from room to room. The mist is playing with her head and she just about goes through will killing herself when she realizes that she does have people who are waiting for her and depend on her return. I love seeing how the mist interacts with each individual person, really showing that it’s got the ability to change it’s plan of attack per victim. This also gave us a small peek into Mia’s life before the mist arrived, and possibly why she was driven to the things she did. 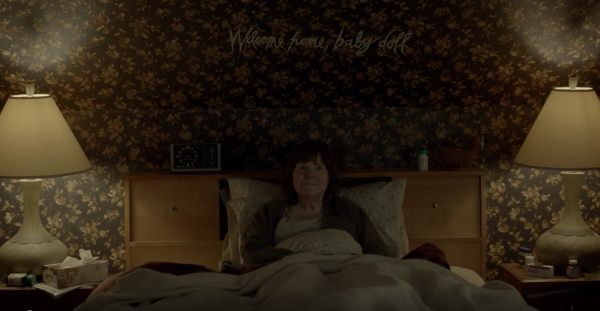 Back at the hospital Adrian has discovered that patients are going missing, and nobody knows what happens to them. Yeah they’re understaffed but patients shouldn’t just disappear into thin air. The nurse also suggests that possibly they left on their own accord, but I’m not buying that. Kevin leaves Adrian and Bryan to wait while he goes to see if he can find another ride or vehicle. they can’t get far in the mist without a car and Mia has the only working one for miles around. Determined, Kevin is set out to find a solution so he can continue on his way. This is when he stumbles upon Dr Moreau wanna be and his room of weird experiments. I understand the desire to find a “cure” or a way to function in the mist, but experimenting on people is not the way to go about that!

Kevin finds himself tied down to a gurney and injected with whatever concoction the doctor is testing this time around. The previous test subjects had been attacked within 30 seconds of being exposed to the mist, so Kevin’s chances aren’t looking all that hot. He manages to make it almost 2 minutes before the effects of the mist start messing with his mind, so he’s not immune like Alex seems to be. Luckily, Bryan and Adrian did NOT sit still as directed, and they’re here to save Kevin’s ass.

Mia shows up just in the nick of time with the vehicle, but the emergency generators have just given out and mis is now rushing into the hospital because the electric doors no longer function. They’re too far away to make it to the car, so they run to the nearest place inside of the hospital where Mia claims they’ll be safe. If they can’t control what doors open to the outside, their best chance is going somewhere that the doors cannot be opened from the outside, the psych. unit.